A ‘humorous and moving story about a mother’s love for her faraway son,’ Majella Cullinane’s powerful story is runner-up in the adults category of the Bloomsday Writing Competition 2020, organised by the Embassy of Ireland and Athens Insider. The judges described her writing as ‘beautiful, natural prose in a powerfully convincing voice that pulls you straight in’ and as an ‘utterly believable insight into the moods and thoughts of a mother dealing with separation, physical and emotional.’

When you left I was a bit confused by the time. The twelve, plus or minus one-hour difference. It was hard getting my head round it. You a whole hemisphere away. Well, that’s how it seemed. Like the world wasn’t going round so much as it was turned upside down. Today’s the longest day here, the shortest night there. If I called you now you’d only be waking up and you’re a bear in the morning. Hardly a word out of you. Yes, Mam. No, Mam. Three bags full Mam. I could ask you to murder our neighbour Nancy Quinn, and you’d say, Yes, Mam.

I keep threatening to go and see you, but the thought of an aeroplane for twenty-four hours gives me the heebie-jeebies. I’m a woeful coward so I am. You’re gone now three years and I still haven’t been out to see you. I’m a disgrace. One day I’ll get up the nerve. I wonder if I just turned up what you’d say? Ah no, I wouldn’t do that. I’d only be cramping your style as you used to say as a teenager.

New Zealand is beautiful you tell me. Where you are in the mountains, with all that snow and ice. Trees neither of us had ever heard of. I looked them up on Google – kauri, puriri, rimu. I listened to a bird called a tui with blackish blue feathers and a white ruff like a Puritan minister. Two voice boxes it said they had, so they click, cackle, creak, groan and wheeze. It made me wonder what it would have been like to travel on an old ship coursing through the seas to New Zealand in the 1800s – the creaking deck, the wheezy sea captain smoking his pipe, the groan of the timbers, the cackle and click of a tui in a cage. One hundred and twenty days at sea. Can you imagine?

You miss crows you said and that made me laugh. Caw, caw, caw. What else is different I ask you? A field’s a paddock, a kettle’s a jug, Wellies are Gummies, which made me think of jellies which aren’t jellies there but lollies. A lolly’s something you suck at the end of a stick I said to you. And hiking is tramping, but you’re not a tramp, are you? You’ve picked up a bit of the accent too. Your voice goes up at the end of sentences now, so you sound like you might fall off a cliff. You say awesome a lot and sweet. It’s ‘sweet’ you tell me which I know means good, but well a chocolate bar is sweet, or a slice of cake, and this ‘sweet as’ business. Well ‘sweet as’ what – sugar? honey?

There’s a week or two where we’re exactly twelve hours apart. I often picture you in your flat, all the lads you share it with, from Mayo and Cork and Dublin, and in between all the banter and laughing the sound of those tuis outside. Sometimes I wake at night and the phone seems like a mute animal next to me, but then if I really wanted I could make it talk. All I’d have to do is touch a few buttons and I could hear your voice. I don’t though. I listen to the house here – the hot water cylinder gurgling in the airing cupboard, the rain tapping behind the curtains, the cat dreaming and twitching at the end of the bed.

This wine’s not a bad one, says she pouring another glass. I’m staring at the sky again. A little darker now on this warm, solstice night. I’m remembering that time I lost you in a shopping centre when you were small. I must have been talking to someone and you got bored, and when I turned around you were gone. I’ll never forget the horrible, sinking feeling like someone had punched me in the stomach and I felt totally winded, and then my blood pressure must have shot through the roof because I felt dizzy. I looked around, calling your name over and again. I kept telling myself to calm down, that you were seven, that you probably knew your way home. Then I saw you, your face scarred from tears and I ran over to you just as an old woman approached to offer comfort. Aidan I said, holding you. You didn’t stop crying. I asked where you’d got to and why you’d left me, and you said you couldn’t remember and you held my hand tight. Tighter than you had for two years. You’d told me at five you were too old to hold my hand anymore, that you were a big boy. You kept me closer the next couple of days until you forgot, just like a child forgets they used to believe in the tooth fairy and Santa and monsters in the dark.

We must have gone to the shopping centre every Thursday night until you were nine or ten and didn’t want to be seen eating ice-cream with your Mam. You got into soccer then and your Da said he was relieved, that he wasn’t wanting you to turn into a Mammy’s boy. But there was never a danger of that, was there? From the time you were small you were always your own little fella. You never clung to me when were out. Crawling all over the place, into everything. Before you went to school you’d ask me in the morning, like some auld fella – so what are we going to do today Mammy?

Our children are on loan, Nana used say. They’re only on loan like all of us are just one of the many borrowed things in the world. I’m lucky though. I count my blessings. Look at poor Mrs Barry two doors down, her son hanging himself there last year. There’s no coming back from that. And the woman gone to skin and bones. As good as a ghost. You’ll not be a ghost though will you? When we’re on Skype the odd time you say you miss home, but you’re only twenty-five, still so much to get out of your system yet. I suppose what I’m worried about is that you’ll fall for one of those sweet Kiwi girls and I’ll never see you again, and my own grandchildren won’t know me from Eve.

Did I ever tell you that Nana used say I’d make a great contemplative nun because I always liked my own company? I used often wonder about them in their cells, their knees on cold floors, the smallest square of light coming through a window, the world’s time a different one from the time behind the convent walls. Would they have allowed a slither of their past into their thoughts? A glimpse of a loved one’s face on a twilight evening, their hair a halo of sunlight as they cycled down a country road. Dark thoughts too maybe: a punishment or a slap, the skin burning with the memory of it, unkind words that lingered for years later, memories that scale any wall no matter how fortified, that lurk in corners like shadows or cobwebs. What would bring them back to the room then, to the silence of their heart beating, back to contemplation? For them God surely, for me the sky. The sky and a glass of wine.

I’ve a notion to sit here tonight and wait for the sun to come up, and it won’t be long either. Summer’s light, even on the wettest, dullest day is still hidden in the folds of night.

Funny, I remember that parable the priest liked to read of a Sunday, about the virgins and the candles or something along those lines. How they were supposed to wait up for their master, but how all of them fell asleep but for one. I have no Lord and master now. So yeah, I think I’ll stay up. Sure hasn’t the last few days been the warmest in recent history? The whole country out in shorts and T-shirts. So many sunburnt arms and legs I’ve lost count.

I haven’t opened your bedroom door since you left. I keep meaning to give it a clean but I’m afraid if I go in that gap of distance will break something in me I can’t fix. I should go to see you. But then what? I’d still have to come back here. I shouldn’t think this, but there you are. There’s more now between us than the distance of 11,806 miles. There’s tonight and the next day and the day after that, and all the space in the night sky – and the boy that’s gone, that let go of my hand years ago. 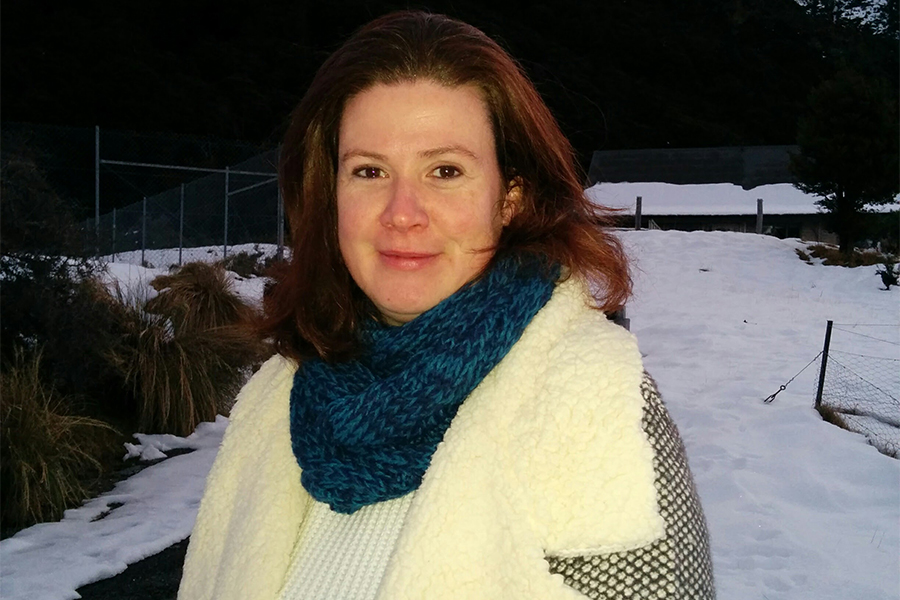 From Limerick, Majella Cullinane has lived in New Zealand since 2008 and writes fiction, poetry and essays. Her debut novel The Life of De’Ath was longlisted for the 2019 New Zealand Book Awards for Fiction. Her second poetry collection Whisper of a Crow’s Wing was published by Otago University Press and Salmon Poetry, Ireland. She’s Professional Practice Fellow in Creative Writing at the University of Otago, where she also completed her PhD last year.