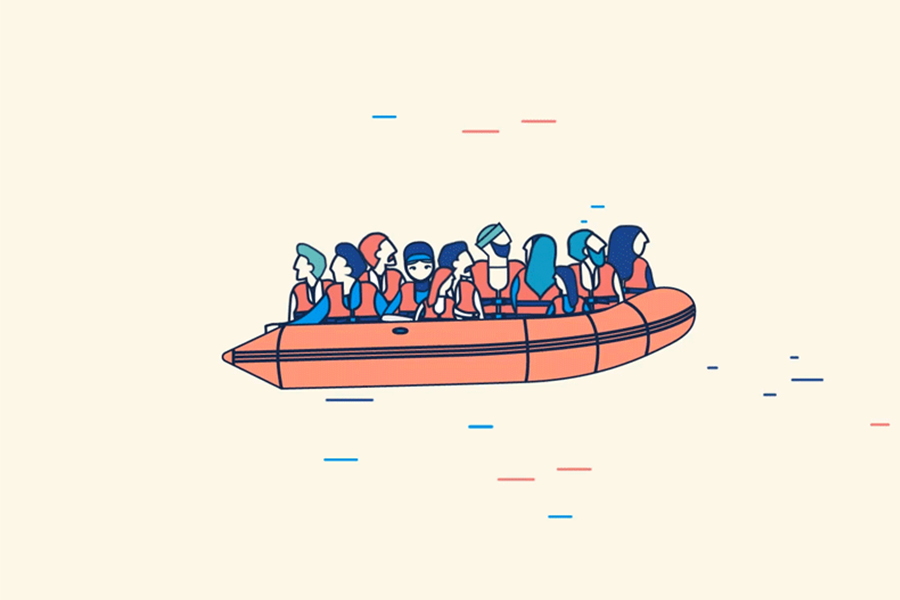 Joan O’Shea Talphezian brings alive the drama of a young refugee making the terrifying crossing in this forceful, emotional story.

There is nothing in the chill morning to hint that this day will be different. Yet, there is nothing ordinary or usual either. The air is  filled with the pungent smells of last night’s haul which the fishermen have  brought to the market before the world  stirs ,and the sun  decides  to put in  a  lethargic  appearance .The  delicate smell of  rosewater and honey being added to ” tsy “, competes  with the strong, rich aroma of the more familiar Arabic coffee,   laden with  sugar  .He anticipates  its warmth , the bitter taste of the coffee , perfectly balanced by the sweetness of  dissolving  sugar  cubes.

The sounds through the towering windows, are familiar yet foreign, from the call to morning prayers and the muffled sounds of mats being unrolled and voices pleading to Allah for safe passage to a new life, to the hushed voices of mothers soothing fractious infants in a language he had heard from his grandmother, now a distant memory in the recesses of his mind. And yet, the words don’t need translation, the calming, sounds are the universal language of a mother’s love. Somehow, it inspires a moment of pleasure, a sign from his Nanna, the Matriarch who endured so much hardship, yet fought fiercely like a lioness to protect her fragmented family from war, poverty, discrimination and fear. All the things he is now fleeing. It gives him hope, he too can be brave.

He thinks  briefly about how he has arrived at this moment, his family and  friends, some scattered around the world, others still trapped in a nightmare from which there is  no respite or those whose time on earth was destined to be brief, their short lives ended by an explosion or a stray  bullet. In years to come he will still bear the scars of his mother’s desertion, when he holds his firstborn in his arms, he will struggle to cope with the pain of a mother who chose her own safety and a new life in Canada, over her ten year old son .But for now, all of that is in the future and the horror and fear of what he is about to do washes over him in waves, until he struggles to breathe.

The last few days provided a backdrop of normality, a prelude to the ordeal ahead. Now, that it is getting closer he questions his decision. He wonders if he can do this, is he brave enough? But he knows in his heart that it is too late to back out. He literally has nothing left to lose, that in itself is a great motivator .He recalls the words of a song, he heard long ago, “Freedom’s just another word for nothing left to lose.”For the first time it makes perfect sense. He feels in his pocket for his stash of notes, dollars, salvation from his half – brother in Canada, one of the lucky ones, who got out in time. Will he ever see him again? Will he ever see a familiar, beloved face again? Bravery is lonely.

After a brief, solitary breakfast of steaming coffee which burns his tongue and warm bread dripping golden and sticky with honey, he makes his way to the designated strip of beach. He checks his pockets one last time, passport, money, i phone, his whole life. It isn’t much and yet, if he is lucky it will be enough.

He wonders if he has been cheated, there are many stories of exploitation and deception. Will he be contacted? Will he get a place on a boat? He has been assured that his 2000 dollars will buy him safe passage .He has waited patiently at dawn in exactly the same spot for 3 days now. It is in an isolated area, covered by trees and bushes away from the disinterested people getting a head start on the work day, too early for the gaudy tourist in their sandals and socks.

The number of others waiting fills him with unease. Surely, they are not all waiting for the same boat?A sturdy wooden one, not a rubber dinghy , he has been promised .Not full to the brim of life’s misery .But he has heard the rumors, many have  been cheated, waiting  for boats which never came, or were packed tightly or were  nothing more substantial than pieces of rubber.

There are grandmothers, old men one foot already in the grave, children of all ages, babies so young, that they might have been born yesterday. This diverse group all smell of fear and disappointment. That’s how he knows he is in the right place, for the last few days all he can smell is fear, mostly from himself.

Today is the day. They are all pushed and prodded onto a tiny rubber dinghy. Their protests are drowned out by the threats of the unscrupulous boatmen, who have become rich overnight, profiting from abject human misery. The promises that it will only take 40  minutes and any minor discomfort will be forgotten is a hollow, blatant lie, but one so practiced that it slides easily off the tongue . This is not the 20 euro day trip from Bodrum to Kos he sees tourists queuing up for, their reward another much coveted stamp on their passports. The promised lifejackets never materialize .Parents cling to crying children and pray loudly. Pray that they will safely make it to Kos and pray that they will be welcome. Unsettling stories have reached them of hostile locals, tired of the dregs being washed up on their shores.

He is thankful that he learned to swim during Beirut holidays, on those lovely hazy days before all this horror started, Tabarjha beach is a lifetime away.  He doesn’t know how long he will survive if the heaving boat capsizes and all of humanity clings to the few swimmers among them. He thinks of the  conversation with his  mother on Face Time, last night, remembering  her platitudes and promises that , “it will all be fine, son “, and  the declaration of love, a decade too late to be credible.

A loud bang erupts from the sleek metal fortress clipping through the waters at great speed.  He recognizes the impressive show of power that is the Turkish Coast Guard, red flag billowing in the breeze. The flimsy rubber deflates and he finds himself clinging onto the side. His grip is precarious and he is being dragged down by the many poor souls who had counted on lifejackets .A mother holds out her crying baby and pleads silently with her eyes. She has two other small children to save and a husband who is floating face down in the water. His dream of a less cruel world already extinguished.

He reaches for the screaming baby and holds tight.

Barely beating hearts are dragged from the water onto the shiny, solid boat .For as moment he marvels at the paradox; the attackers have become the saviors.  But, there is no time for rumination. He doesn’t remember much after that. Psychologists will explain it as disassociation from PTSD, but that is still many years in the future.

They are bundled onto a bus, cold and hungry without food, water or dry clothes. He understands enough Turkish to gauge that they are being taken to Suruc, a refugee camp 1,000 miles away on the borders of Syria. He has the presence of mind to send a message to his half brother in Montreal and his uncle in Athens, before his batteries run out.  He finds himself pleading with a God he has long neglected.

On the long and lonely bus journey surrounded by sad, dejected faces,  he thinks  again of his grandmother .Nana told him so many stories about the Turks ,  the genocide , his ancestors being forced to march from beautiful  Adana on the banks of   the Seyhan,  across  the  arid  landscape to Lebanon and Syria .He  silently acknowledges  the terrible irony .They were deprived of transportation , he is being  forcefully transported. They were running to escape torture; he is being forced back to torture.

Hours later, when darkness has fallen, they pass through Adana, that mystical land of his childhood. For the first time in many years he makes the sign of the cross, a mark of respect for his ancestors who were chased from their land by the same overlords now controlling his movements. Hope slowly dwindles as he recalls the wisdom of his third grade teacher, “History repeats itself in endless, violent circles. “  Sleep finally, mercifully, offers temporary oblivion. 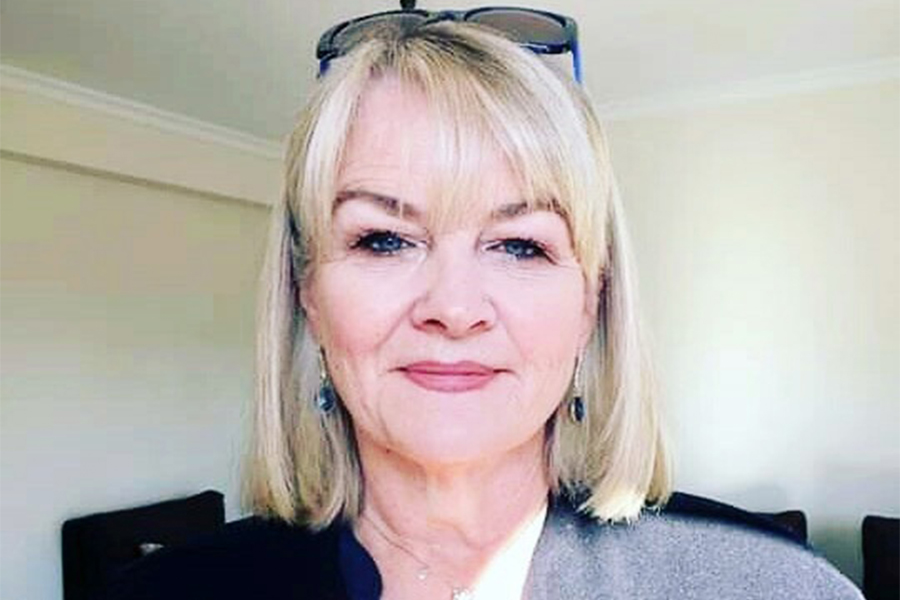 Joan O’Shea Talphezian was born and raised in Tahilla, Co.Kerry. She moved to Greece in the mid 1980’s after graduating from UCC and has been teaching English and World history on the International Baccalaureate programme in a private school in Athens since 1996. She lives with her Lebanese- Armenian husband, has two grown up children, a lovely daughter in law and a German shepherd called Ray.