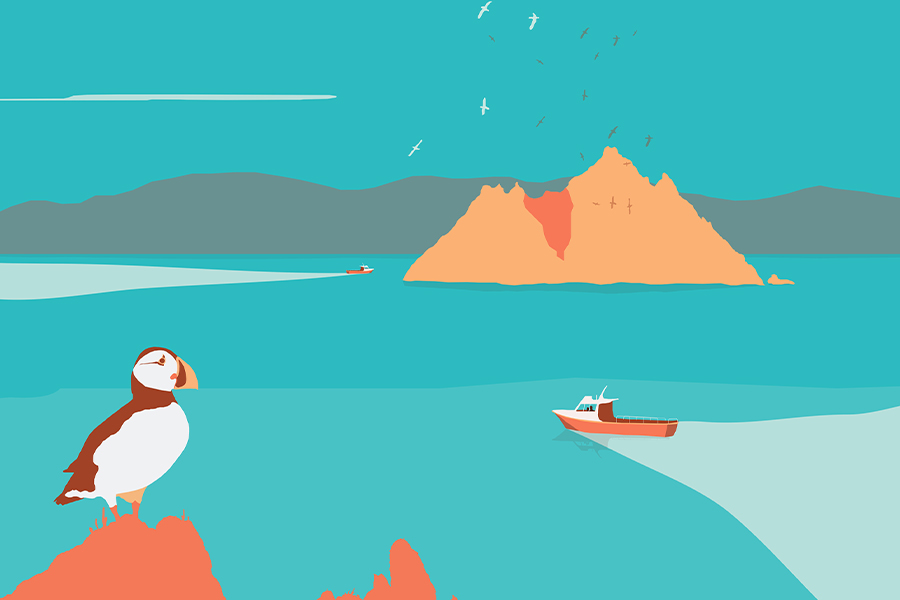 As the sun rises, Skellig Michael is thrown into shadow, its black, hulking silhouette reminiscent of an iceberg dislodged from its frozen roots that has travelled far from home to settle off this jagged coastline on the southwest of Ireland.

The sun wakes me. Light streams through the bare window of my cabin. Endless ocean stretches outwards towards the horizon where dark blue meets light blue at the hem of the sky. I grab my swimsuit, soap and a towel and make my way to the pier.

I notice the natural light. It dances up and down the stony path in front of me and over and back across the ocean. The sun glints on the surface of the water making it sparkle like a thousand flashing paparazzi bulbs. Light expands, uncontained by the constraints of a city and unpolluted by its air. It is clear, pristine, unfiltered.

As clean, white clouds chug across the sky like puffs of steam from a train, sunlight sweeps over the rock, changing its colour momentarily from green to brown to black, then back to green. It throws shade, then retracts it, disappearing almost as quickly as it appears. It is like watching a painter at work, the action of a natural brushstroke sweeping across a canvas. It creates a feeling of wide, open space, even though the rock is small and narrow.

At the pier, the waves are gentle, lapping against the ropes and the iron stairwell to the landing. The sea looks inviting, but I know the water is cold. The Atlantic Ocean never warms up, but a swim in the sea is a better start to the day than waiting for the kettle to boil and washing from head to toe in a tiny basin in my cramped cabin.

Seabirds clot the sky. The plaintive cries of Kittiwakes, that onomatopoeic bird, crying kittiwake, kittiwake, reverberate into the air above me. Seagulls caw-caw as they wheel across the sky, the sound harsh against the wind. Guillemots laugh on their narrow rock ledges, jutting from the cliff. They are the avian equivalent of high-rise apartment dwellers sitting on their balconies at the same time. They are my audience as I plunge into the ocean.

I sit on a sun warmed boulder to dry off until I see the first boats approaching in the distance, their v shaped wakes slitting the surface of the ocean, a mirror image of a flock of birds flying in a v formation above.

I climb over six-hundred steps to the monastery. I try to count the exact number, but my concentration breaks every time I see the cartoon beak of a puffin emerge from underneath one of the stone slabs.

Puffins, unperturbed by my presence, strut on their bright orange feet from their burrows, across the grassy slope, to gaze out over the ocean, contemplating flight for a moment before taking off, where they hang in the air before diving into the waves, a disconcerting sight, like a miniature penguin able to fly.

The cry of the puffin is different to other seabirds. It is a droning sound, like a running motorbike engine. When I hear this noise for the first time, I look around, half expecting to see a cluster of bikers on their Harley Davidsons. Then I remember where I am. I continue upwards.

I pause at Christ’s Saddle, the grassy mid-point of the island. The steep stairway rises in front of me, winding its way up towards the monastery. It resembles the spine of a skeleton, stone after stone, vertebra after vertebra. A literal backbone.

I look around at the ocean on all sides. Sunlight breaks through the overcast haze and God light streams through the clouds as if beamed from an outstretched hand in the sky. It pools onto the surface of the ocean like spotlights on a stage.

I huff my way to the top. A narrow path with a sheer drop to one side leads to a simple entrance. I pause to catch my breath. I duck my head under the lintel of a square doorway and there it is – a tiny, stone metropolis on the edge of a cliff at the edge of civilisation.

I look over the wall and see tourists spilling from the first boat of the day, their multicoloured raingear vivid against the silvery stone. In half an hour the fittest ones will begin to trickle into the monastery.

I spend the afternoon explaining the site to them. I show them the beehive huts, egg-shaped proof of devotion to God that cluster together as if trying to keep each other warm. 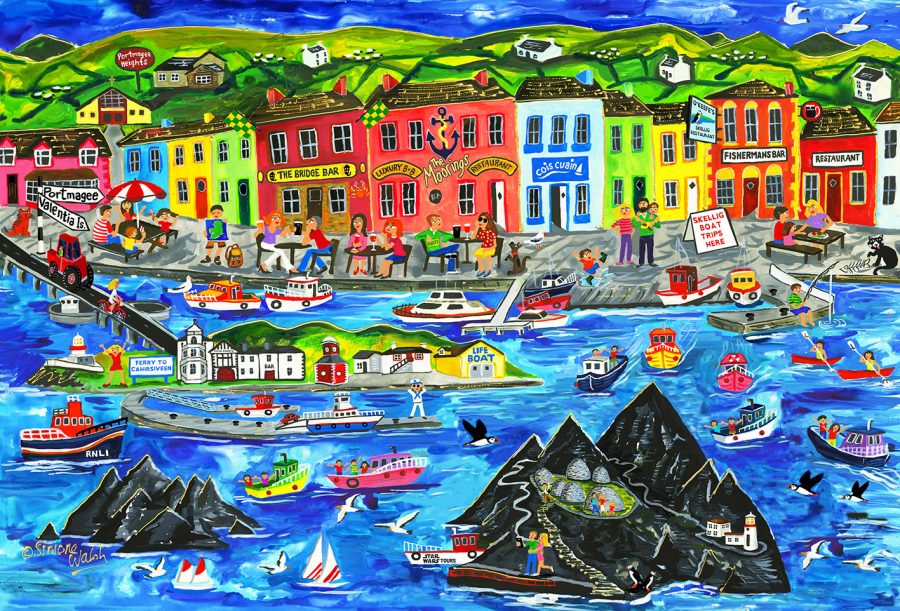 St Michael’s Church, named for the warrior saint, lost its roof over the years, but an arch shaped window remains and frames a perfect view of Little Skellig and its cackling colony of birds. As I talk, I watch some of the birds detach, then return as if pulled back by a powerful magnet.

The monk’s graveyard is in front of the church, a rectangular mound surrounded by lopsided stone crosses that look like they have been blown sideways by the wind.

The sheltered, south-facing, sunny monk’s garden is at the front of the monastery.  Hidden cisterns carved from stone by the monks irrigate the soil. Rain runs in channels down the rock and gathers in stone basins. I tell the visitors to dip a hand in the cool, clear liquid and take a sip.

For a place so rocky, where not a single tree grows, the monks made it lush and plentiful, at least by their standards. They had everything they needed – food, water, shelter, and a place for prayer. They even had toilet facilities. In a corner of the monastery there is a latrine – a small, square, stone building which provided privacy, protection from the elements, and a primitive sewage system consisting of a freefall, 600ft drop into the distant roar of the waves below.

Birds are the only inhabitants of the monastery now. The night birds – Manx Shearwaters and Storm Petrels – put on a nocturnal concert, all night, every night of the week. During the day they hide from the predator gulls. They nest in the spaces between the stones of the beehive cells. At night they make the stones sing.

For one monk, this manner of community living was an assault on his senses, an insult to his ascetic sensibility. He sought total isolation. This cosy cluster of huts was too comfortable for him. He took his asceticism one step further and ventured higher up the rock, squeezing through the Eye of the Needle, a narrow passage on the South Peak, the tallest, craggiest part of the island.

Perhaps in an homage to Meteora, the Rock Monasteries of Thessaly, on three tiny terraces, he built a place for prayer, meditation, and contemplation, virtually in the air, that only a hermit could love. For him it was Heaven, a sight for God’s eyes only. Here, he was higher, holier, and closer to God. Earth touching sky. Almost.

By the thirteenth century, the monks gave up their self-isolating existence after six hundred years in their cliff-top monastery, probably because they could not handle the austerity and hardship any longer. Or maybe they did not like the weather.

Tired of being locked down, they locked up and moved out. Not too far away, across the water to Ballinskelligs from where they could still see their island home. Maybe they visited at weekends.

In the late afternoon, after the last tourist boat has departed, I descend the steps and turn right to make my way to the ruin of the old lighthouse on the island. I lie in the long grass with a book and gaze at the sky between chapters.

Before darkness falls, I make my way to the pier, this time to catch my dinner. I bait the fishing line, cast it into the sea and wait for the mackerel to bite. I sit patiently, watching the waves curling and breaking before flinging themselves against the pier.

At night, the ocean is black velvet. I fry freshly caught mackerel on a gas ring, by candlelight. I eat outside my cabin to the soundtrack of the waves, invisible in the dark, crashing against the rock. Sometimes they break so high I feel drops of spray on my face. At intermittent intervals, a golden beam of light from the new lighthouse sweeps across the ocean in a wide arc, like a searchlight.

It is June but the air is cold. The moon sits high and full, watching the stars, shiny, silver pinpoints in the black fabric of the sky. 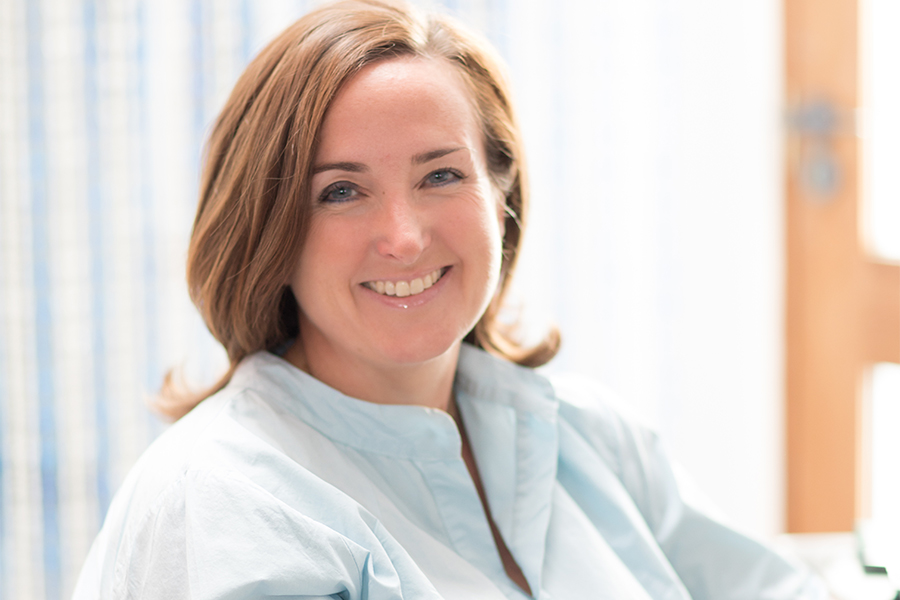 Michelle Walshe is from Dublin. She began writing in 2017 and has been published in print and online in The Irish Times, The Irish Examiner, The Telegraph, The Sunday Independent, The Gloss and Woman’s Way magazines and in an anthology, Teachers Who Write. She has won bursaries, residencies and writing prizes, most recently the Iceland Writers Retreat.