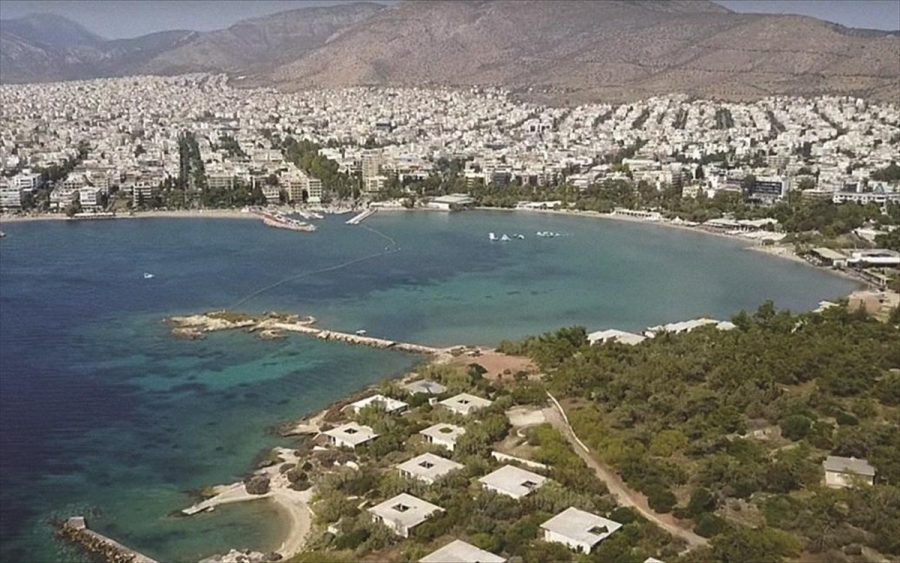 Art historian Els Hanappe is all for progress but warns that sustainability and engagement with the local community are key to making the Athens coast a truly unique destination.

The word alone fills the mouth with longing and tantalizes body and mind with its associations of glamour, luxury, sea, sun, palm trees, casinos, yachts and a laidback lifestyle.
Does it? Or might it just translate into past glory, overcrowded beaches, rampant commercialism, bad service, and cramped quarters?

Strangely, the concept of the Athens or Athenian Riviera has slipped into consciousness without much ado. The Riviera, a noun with Italian and, further in the past, Latin roots, initially referred to a stretch of coast in the south of France, down from Monaco into Liguria, Italy, or from the Côte d’Azur to the Riviera Ligure. Its mythical connotations started in the eighteenth century when wealthy Western Europeans escaped the chilly winters to seek refuge in the region’s mild climate. During the nineteenth century, members of the European royalty and nobility increasingly sought out health resorts and eventually settled down in opulent Belle Époque seaside villas and mansions. At the beginning of the twentieth century, they were joined by the new American rich and exiled Russian aristocracy, and by artists, writers, celebrities, and movie stars who bathed in the light and balmy weather. Wealthy patrons who contributed the funds mingled with bohemians who created the thrill, old money that provided the aristocratic flair and parvenus who supplied the gossip. A right mindset was all that was required. The winter season turned into a summer season and year-round visitors.

The legacy and attraction of the original Riviera turned into a brand to be applied to destinations all over the world as a guarantee for exclusiveness and exoticism. The idea for an Athenian Riviera was first conceived during the twenties, headway was made during the fifties but it is now, a century later, that major plans are being realized. The city of Athens is not historically located at the seaside but communicates with the sea through the harbour of Piraeus. Along the coast were fishing villages and, inspired by the early tram that brought hot citizens from the Academy down to Faliro, beach cabins and the occasional grand summer house. 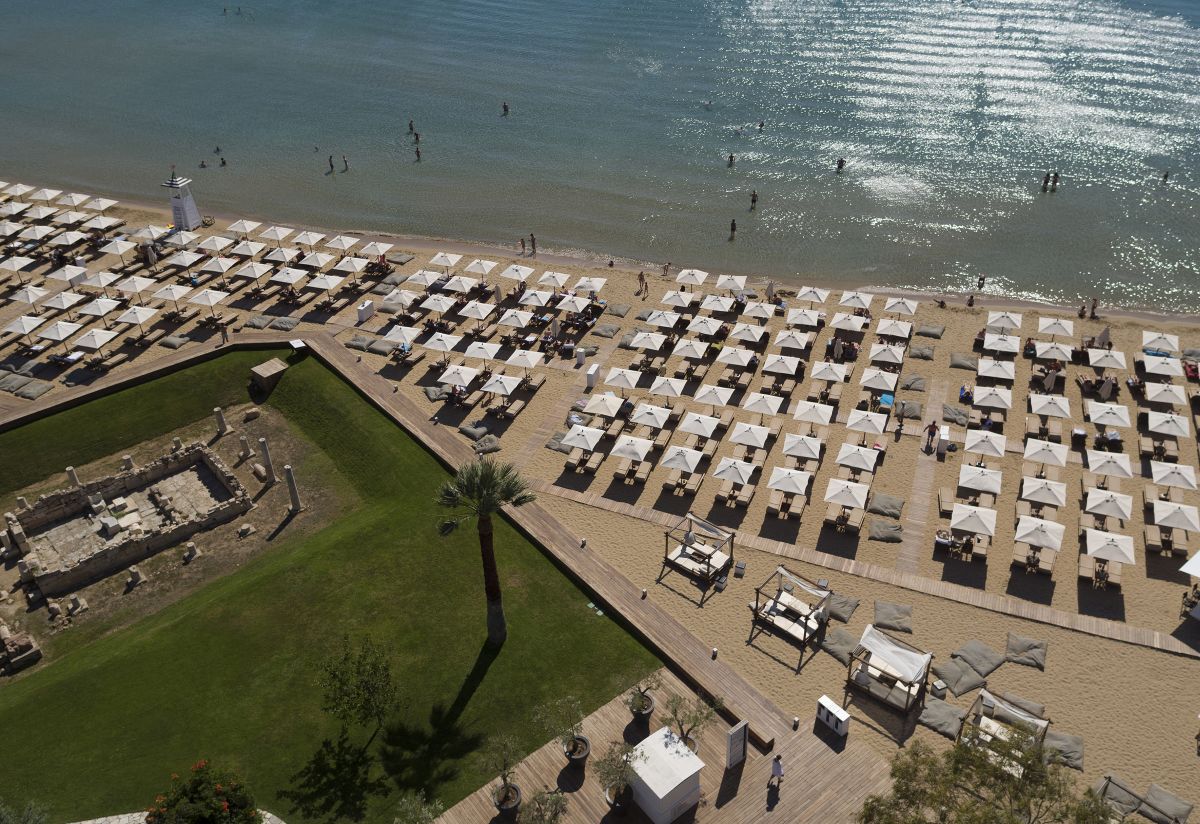 For the late twentieth-century traveler, the shoreline was barely an attractive sight. With Piraeus and its industrial hinterland lingering on the right, the jam-packed coastal road Poseidonos Avenue prone to nightly high speed racing and fatal accidents in front, and endless blocks of bland apartment buildings all along, there was little on offer to excite the senses.  A Riviera was furthest from the mind but the question did pop up repeatedly: why does Athens not take advantage of this unique opportunity with a coastal stretch along the Mediterranean Sea that extends to about seventy kilometers between Piraeus and the ancient Temple of Poseidon at Sounio? Perhaps the answer lay in the ready availability of a long coastline around the mainland and islands. Some twenty-four kilometers of this distance are situated within the metropolitan boundaries, a puzzle of privately and publicly administered pieces with marinas and yacht clubs in between, owned by one municipality after another. Further on and beyond the city, from Vouliagmeni Lake to Cape Sounio, the road is beautiful with splendid views and dangerous bends, passing through seaside towns such as Lagonisi, Saronida, and Anavyssos. 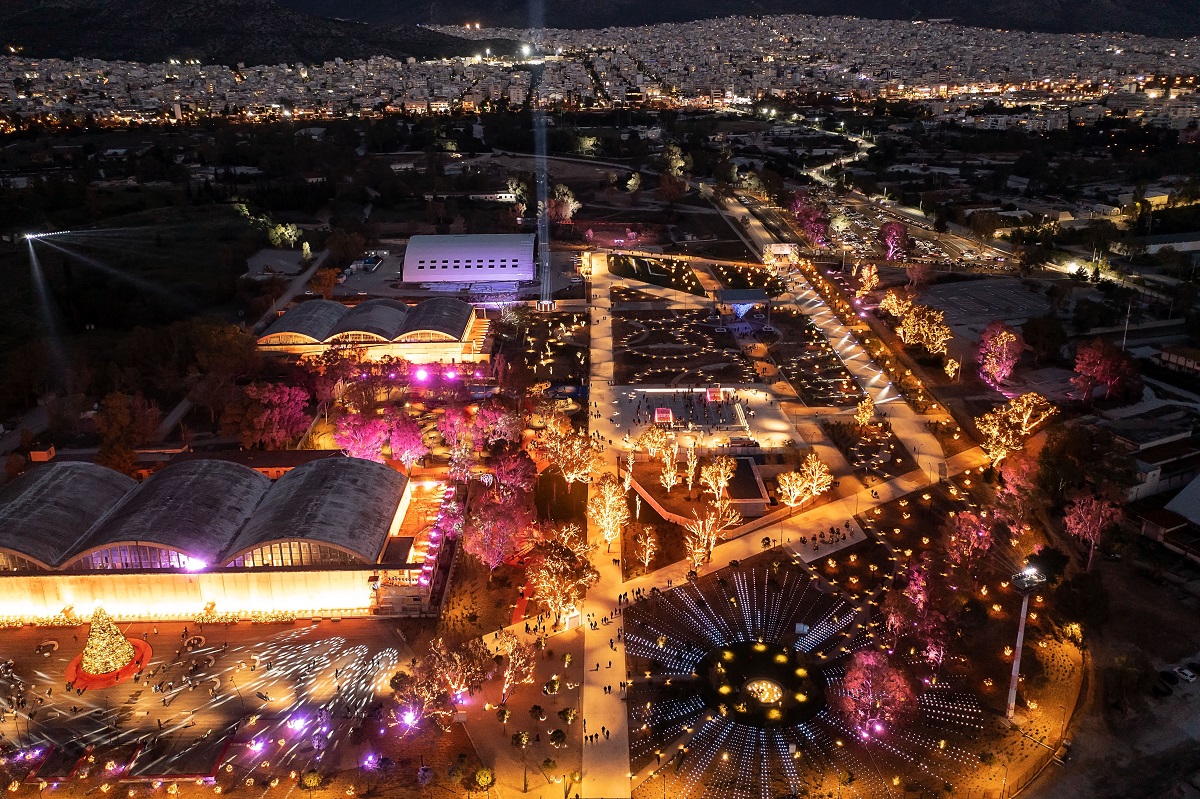 In recent times, the landscape has been changing and mega projects have been set in motion. Starting with Phaleron Bay, port to ancient Athens, the area was first enriched with the world class Flisvos Marina, adjacent to the Flisvos Park, before the grand opening of the architecturally impressive Stavros Niarchos Foundation Cultural Center with surrounding Mediterranean gardens was announced. A pedestrian pathway was laid that connects Edem with Flisvos but stops short of the long SNFCC Bridge that crosses the main avenue. The tram, as does the traffic, cuts through the scenery but construction has started on a tunnel that will link Alimos to Glyfada. This improvement will greatly benefit The Ellinikon, a large-scale urban regeneration project on the site of the old airport with luxury housing, commercial properties, corporate headquarters, hospitality and catering services, shops, sports facilities, and a park. Further east, on the Lemos peninsula of Vouliagmeni, the entire property of the Astir Palace hotel complex – the birthplace of the Athenian Riviera in 1959 – was sold for redevelopment. Suitable amenities for the new, more demanding guests meant a makeover of the Vouliagmeni Marina as yet another glitzy attraction. 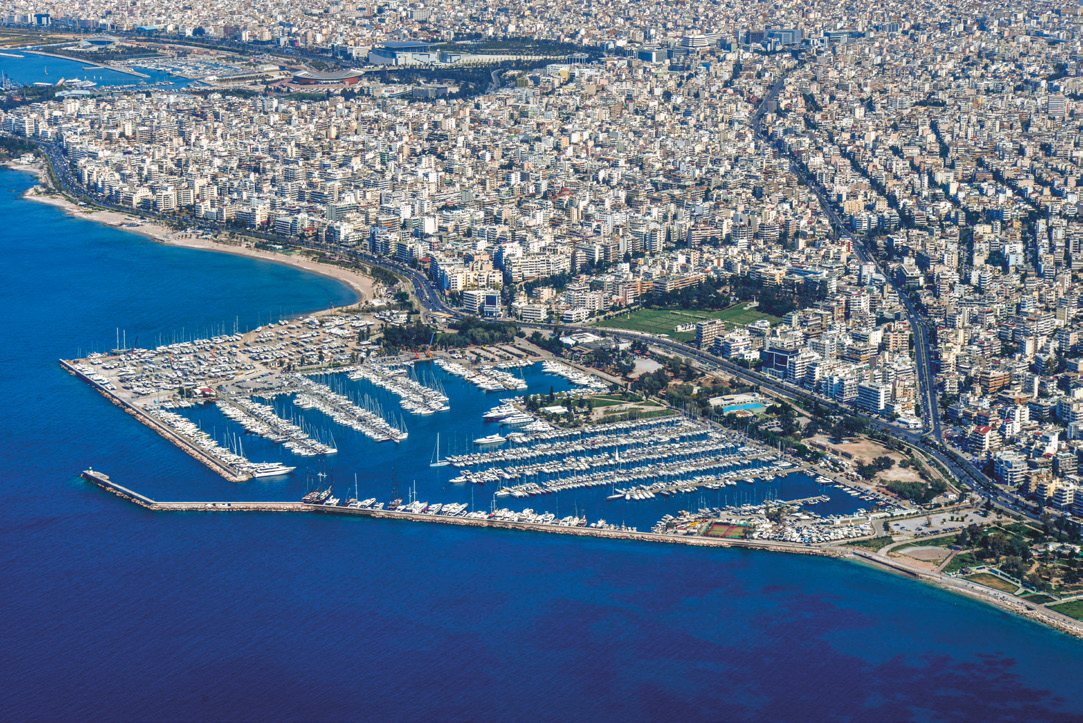 It is encouraging that progress is being made to appreciate the city’s shore. However, changes are being led by big corporations who create pockets of exclusivity whereas a united front of the coastal municipalities is missing to tackle the many issues that concern its inhabitants. For starters, everybody wishes for a continuous esplanade that would allow citizens and sightseers alike to walk along the beach, with a designated lane for cycling.  I live in Glyfada at a 10-minute walk from the sea, but access is blocked on all sides by fancy beach lounges. It takes another 10-minute walk with traffic whirling by to reach a beach where I used to enjoy a plate of calamari at sunset. The fish tavern is now gone in a bid to clear the waterfront. The southern suburbs of Athens do not have the charm of the villages and towns in the south of France. The new development projects claim environmentally friendly buildings and landscaping and the inclusion of parks as a percentage of the overall site is admirable, but sustainability also demands respect for the host community, its culture and its wellbeing, and opportunities for individual growth. The Greek people are natural hosts, and nearby luxury expansions will drive up the real estate prices in a country that is scarcely known for its high-income households. It brings high-end tourism to Greece, creates entertainment for the citizens, generates income for the owners but lacks authenticity and adds one more pin to the map of global tourist spots.

Tourism is at its best when there is a vibrant and diversified local community that is not entirely dependent on visitors but can sustain itself at any time. Maybe we should recall the seashore Athinaiki Akti, establish our own brand and values, and brainstorm about innovative solutions. There is still plenty of space, time, and opportunity to fill in the gaps with more inclusive and unifying initiatives that address different audiences and actively involve the residents. A future vision can only be based on lessons from the past and from other geographical areas. Worthwhile projects implemented on the mainland and some islands may well serve as examples. 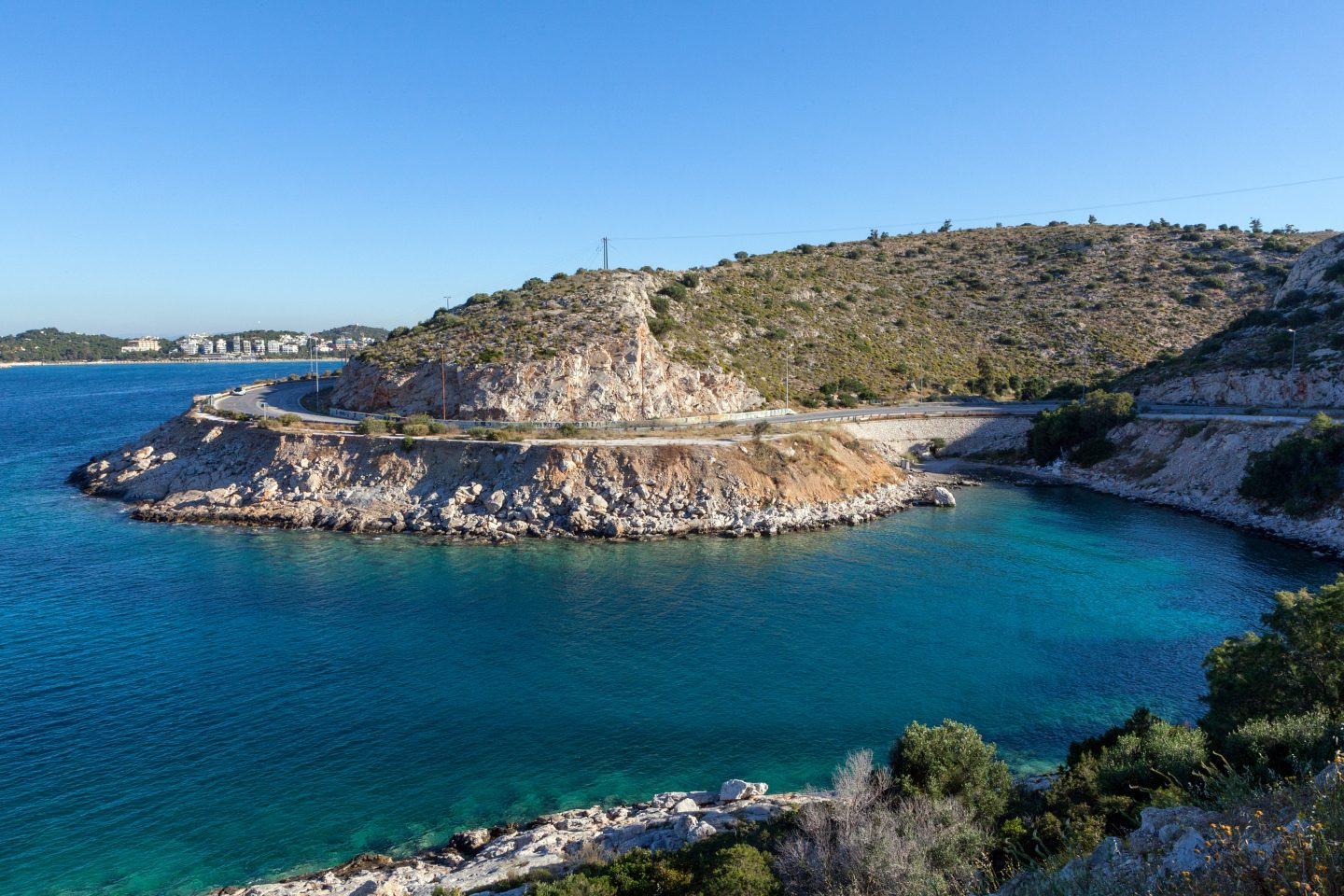 Resorts provide a one-sided development. They attract a certain customer who seeks comfort rather than adventure. With all amenities, facilities, and services available within its walls, there is little need to stroll beyond and connect with the enriching culture and history of the location.
The SNFCC for instance has continuously reached out to a larger public of all ages and interests. With at its heart the National Library and Opera, it is a meeting place for everyone. However, it is also an oasis in an otherwise indifferent area, a destination in its own right, for people to arrive at and depart from, with little to explore. 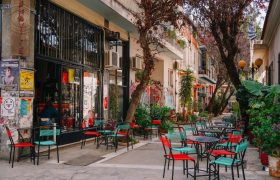 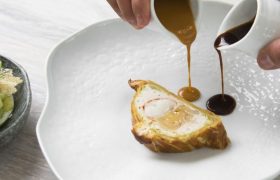 7 awesome outdoor exercise options to get you moving this September!