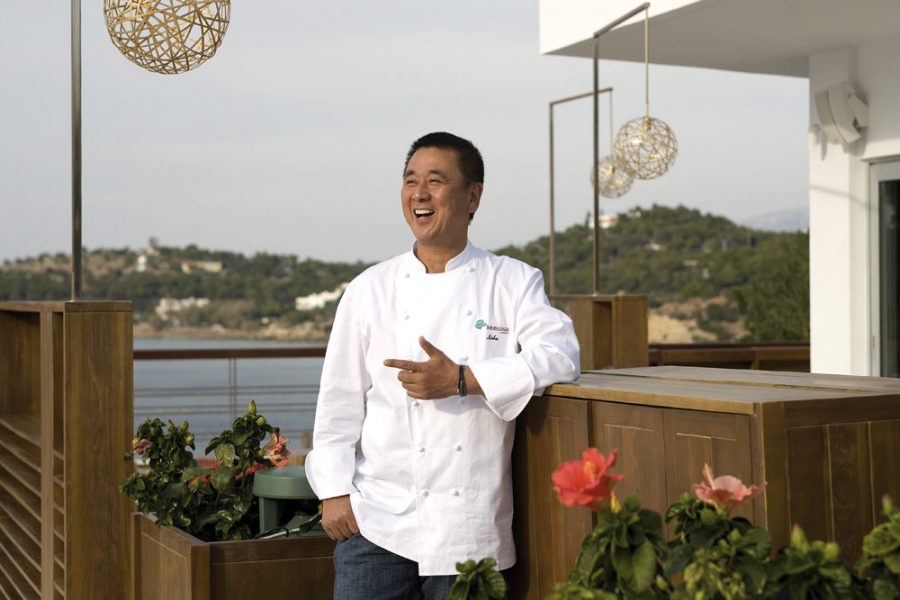 Athens Insider’s Christina Michele Rios sits down with Nobusan to understand the man behind the global restaurant empire.

Global entrepreneur with restaurants in over 22 locations worldwide and now a hotelier, Nobu is no stranger to hard work and international travel. Here is a man, at age 65, who wakes up at 4 am to workout. Nobu moved to Peru in 1973 and later to Argentina, infusing traditional Japanese food with South American spice and ingredients. After opening a few ill-fated restaurants, he finally found success in 1987 with his Matsuhisa restaurant in Beverly Hills.

What exactly influences your dishes?

I am Japanese but I lived in Peru, Argentina, Alaska and LA. So I have a basic Japanese technique, taste and presentations intermixed with many different countries I have lived in or travelled to. I started the Nobu concept as a Japanese one with Peruvian influence. Here in Greece, I make the ceviche with Feta cheese, so I include hints of local and seasonal produce. We also use Greek olive oil in our dishes in Athens in Mykonos.

What is your favorite restaurant in Greece, outside of your own?

In Mykonos there is a taverna called Kiki’s on Agios Sostis beach. It’s very traditional and simple. I eat there everytime I go to Mykonos.

What is your favorite dish at Kiki’s?

I love the salads, squid, octopus and then the pork chop. Its very tender and delicious.

Have you been to any other islands other than Mykonos?

I have been to Santorini and Rhodes on a cruise but my favourite is Mykonos.

Other than Japanese food, what is your 2nd favorite cuisine?

Italian and Chinese. I like all Asian food in general. I also love Greek food…its simple with local high quality ingredients. It’s hard to pick a 2nd favorite.

You discuss the importance of Kokoro (heart) in your cooking, why is that so important to you?

Well growing up, it begins with your mother cooking your food for you. You always remember and think about her cooking. She is your food mentor. She cooks and provides for you—from her heart. My mother’s cooking was an education for me. She was the one who inspired me to cook.

How old were you when you decided to become a chef?

Well my father passed away when I was 8. I had two older brothers who I looked up to. When I was 12, my older brother took me to a nice sushi restaurant with sliding doors, lots of energy, friendly staff. We sat on the sushi bar to eat and it was the first time I had sushi and it inspired me. It was delicious.

When you began working in restaurants in Japan, you worked your way from the bottom up, how did this help you?

I was a dishwasher, I cleaned tables, I delivered food for three years. These positions are an integral part of a restaurant. We need these people to succeed and I understand and feel for them because I have been there.

What was the biggest obstacle you had to overcome?

I almost killed myself at 29. I had just opened a restaurant in Alaska which caught fire a few days after opening. My whole world came crashing down. I had two kids at the time, they were 1.5 years and 8 months old. Kids have no idea about the stress and problems their parents are going through. I couldn’t smile, I couldn’t eat and I couldn’t drink water. I was lost. My kids would come around me with their cheerful spirits, playing, smiling and they were so appreciative that their father was home with them. My wife was right by my side helping me and supporting me. They are the ones who propelled me through that dark time.

It was also the best lesson and learning experience. Everything I have learned in life was from my mistakes.

Tell us a little bit about your partnership with Robert DeNiro and how that developed.

I was introduced to Bob around ’88 by his good friend and my regular customer at my restaurant in LA. After he had visited a few times, people began to ask me, “You know DeNiro?!” But I didn’t really know who he was exactly. Before LA, I was living in South America. I knew the name but I didn’t know his face or movies because I was always working and didn’t speak English or Spanish so I couldn’t even have watched his movies!

He was quite persistent about approaching you to open a restaurant in New York together.

He invited me to come visit him in New York in 1990. He had just bought a building in Tribeca and told me he wanted to open a restaurant together. I was very hesitant. I didn’t have the best experience with prior partners in my other restaurant. I had just opened Nobu in LA and it was not properly organized yet. So I told him “Thank you so much, but I am not ready.” Bob understood my situation and was not pushy at all. After about 4 years he called my house and said “Nobu, I think maybe now is the right time to come to New York.” I was surprised.  The biggest Hollywood star was patiently waiting for me. Nobu New York opened in 1994.

You were the first chef to introduce the Black Cod Miso dish. What brought you to create it?

In terms of the sauce, marinating and using sauces is very important to our cooking culture in Japan. Marinating was necessary to keep fish fresh. I developed the sauce and then decided to use Black Cod because it was so soft and tender—it melted in your mouth. It was also very cheap in those days, 25 cents per pound and now it is 7-10 dollars a pound. No one was using this fish so it was a good opportunity to try something new.

Do you have time to enjoy what you have built with your hectic schedule flying to different countries daily visiting your restaurants?

The last 3-4 years I have finally begun taking proper vacations. In the past I used to take a vacation every few years but it was a restaurant cruise so I was also working. But now I built a house in Japan in Hakone. It’s a mountain region with natural hot springs and is very therapeutic. I am surrounded by peace, quiet and nature. I can disconnect and shut off my phone. It’s my favourite place in the world.

If you had to give advice to aspiring chefs about the ‘secret recipe’ to success, what would it be?

As a Chef you need just this: technique, sense, always striving to be better, always looking for and using the top quality ingredients, and kokoro—passion.

If you could give a life lesson, what would it be?

Never, never give up. Keep on going. Always do everything with your heart and passion. So patience, appreciation, passion and resilience.