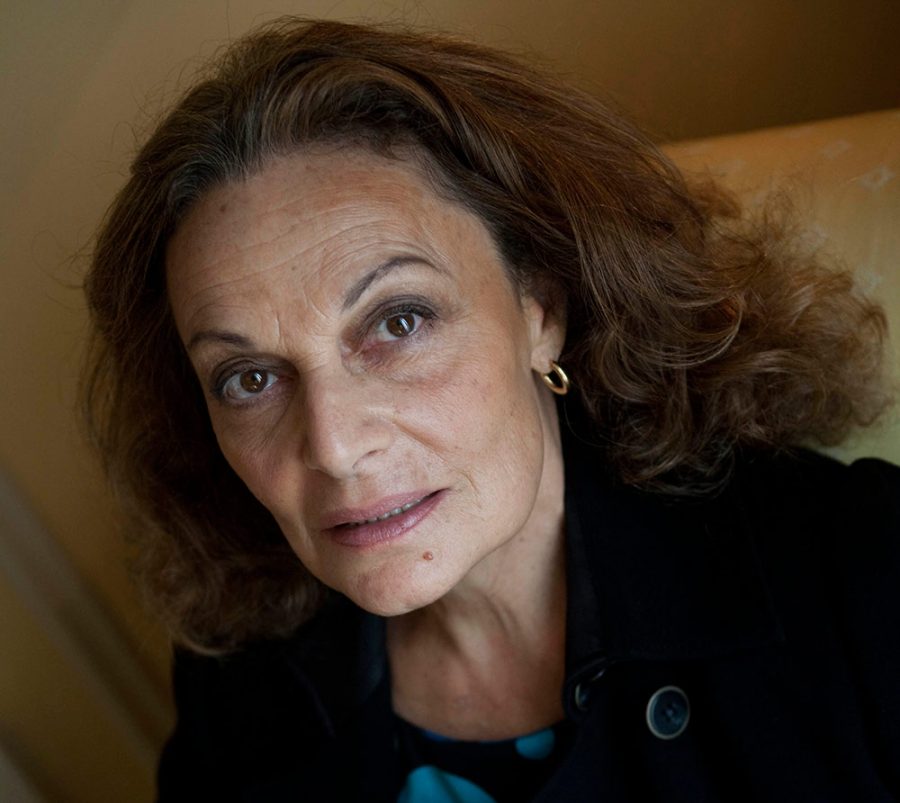 Diane von Furstenberg creates product ranges from swimwear to accessories to home furnishings, yet her name will always be synonymous with a certain wraparound frock. Cordelia Madden-Kanellopoulou meets the iconic designer. “For me, it’s important to give real design, real quality, at a price that is not too wild, and maybe it’s because of that that we are surfing the tsunami of the crisis very well”.

She’s a fashion icon; a world-renowned designer reigning over an empire that makes over 100 million euros a year; a Belgian-born former princess and model who has posed for Andy Warhol and graced the cover of Newsweek; her dresses are adoringly worn by an A-Z of A-listers from Eva Longoria to Uma Thurman; she’s the subject of a recently opened retrospective exhibition in Moscow, and she’s granted just six interviews during her brief spell in Athens to launch her second standalone DVF boutique.

As if that wasn’t jitter-inducing enough, the evening before Insider’s scheduled rendezvous with Diane von Furstenberg, a call comes through from her press handlers advising on the correct pronunciation of her name and recommended interview topics.

And yet, when she breezes into the Grande Bretagne suite, slim, on-trend and easily elegant in over-the-knee shift-dress, opaque tights and skyscraper heels, the tension evaporates. Pouring herself a weak cup of tea (no milk, no sugar), she tucks herself up on the sofa, patting the seat next to her and compliments me on my dress (a DVF wrap, of course) and my rushed, early-morning, makeup-free face.

Lifting her sunglasses to reveal a clear, astute gaze, she says rather wearily, in her lilting Italian-tinged American accent, “If at least I didn’t have to wear so much make-up…” before refocusing, with a smile, and asking where I bought my dress. Unconsciously tactile, in small gaps between questions she tweaks a stray hair from my collar, touches the tattoo on my arm with a murmur of approval, or leans back languorously to admire the Acropolis view from the window.

Far from insisting on a set agenda, she is equally at ease sharing fond memories of her schooldays in my home county of Oxfordshire, talking openly about her husbands – her early union with Austro-Italian Prince Egon von Furstenberg, which resulted in her two beloved children, and her 2001 marriage to media mogul Barry Diller, with whom she has been friends since the 1970s (she describes their relationship as “a real long-term love story”), and discussing pet projects such as the Highline park on New York’s disused elevated railway (largely funded by her foundation), as she is reminiscing about her extraordinary 38 years – and counting – in fashion.

You shot to success in the 70s with the release of your wrap dress, which became an instant icon and remains a top-seller, as relevant today as it was then. Did you have any idea when you were designing it the lasting impact this piece would have on everyday fashion?

I had no idea! You know, I never had a vocation for fashion; when I started I didn’t know what I wanted to do, but I knew the type of woman I wanted to be, and that was a very independent woman, in charge of her destiny, in the driving seat of her life. Of course I was very surprised by the kind of reaction I got from that one dress, but it was even more surprising second time around [after a hiatus in the 80s, von Furstenberg relaunched her brand in 1997, one of fashion’s most triumphant comebacks] to see that, as I get older, the younger my customers are and the more I appeal to young women; that’s just a great thing.

When you first set up your brand, you were a recently married mother-of-two. How did you get your foothold in fashion?

After I met Egon, I went to work in Italy for a man in the fashion industry. I didn’t think I was actually doing anything, but in fact I learned everything that I needed to know afterwards. Then Egon came back, we met and got engaged. I also got pregnant, and was taken by surprise: there I was, wanting to be independent, wanting to have a life of my own… I went to the Italian man and asked if I could make a few samples, to try to sell them in America. It all happened very fast – I moved to the US in 1970, for two years I was selling things out of my dining room, I had no experience, and 1976 I was on the cover of Newsweek. Plus between 1970 and 1971 I had my two babies.

You are a proud grandmother, who has famously not succumbed to surgery, working in an industry that reveres extreme youth and beauty. What’s your secret of staying so slim, fit and gorgeous?

Oh no, today I feel awful! But I have a lot of energy, and I love life. Also, my second career is only really 10-11 years old, and this one is even more fun, more energizing. Also, what keeps me feeling young and happy is the fact that I feel so relevant.

The wrap dress slogan, emblazoned across an image of you modelling the dress, was ‘Wear a dress, feel like a woman’. Is this still core DVF philosophy?

Totally. The funny thing is that everything I did at first was through instinct. A friend took a picture of me on a white cube; when I saw it I said, ‘It’s too white, too big, I should write something in it.’ Without even thinking, I wrote ‘Feel like a woman, wear a dress.’ That became the ad, but it also became so relevant and stayed with me all the way through.

As president of the Council of Fashion Designers of America (CFDA), you have spoken out against issues such as size zero models and racial discrimination on the catwalk. You have also been a vocal supporter of the pending design piracy prohibition act. Can you tell us more about this?

There are two things, one is counterfeit and the other is design piracy. The truth is that design piracy will never completely go away, but what I found terribly unfortunate was that people started to boast about it, and that is not cool. You create a law to change behaviour. Will everyone copyright their designs, no, but it will create some intimidation. Mass stores like H&M and Target are beginning to hire designers, whether named or not, and that’s very good: it enhances the value of design and that is my whole purpose with this bill.

With the recession affecting discretionary spending, are you adopting a different strategy in these frugal financial times?

Well, I have to say that this year was excellent for us. We give a really good quality product for the price. This [she smoothes the fabric of my geometric-print dress] will never ruin itself. Those dresses from 35 years ago are selling for more than new ones. For me, it’s really important to give real design, real quality, at a price that is not too wild, and maybe it’s because of that that I am getting people filtering down from the top. We are surfing the tsunami of the crisis very well.

Do you have any advice for Greek designers struggling to establish credibility, and for strengthening their fledgling fashion week?

Well, I’m not very familiar with the fashion scene here but after my lunch with the Hellenic Fashion Designers’ Association (HFDA) members, I’ll have a better idea. But my advice is to do what you think is right. It’s very important for each country to develop its own industry, its own fashion, and there’s so much inspiration here that I can’t imagine there isn’t talent.

You’re in Athens to launch a shop in Kifissia, your second with your local partners Rakas, as well as to show your pre-spring 2010 collection – full of short and sweet dresses perfect to pop into a holdall for a weekend on Mykonos.

With your Greek connections [her mother was born in Thessaloniki] I’m sure this isn’t your first time here?

I’ve been before but never in winter, which is more pleasant actually, and I’m always passing by. But this time, I have had three days to get a good sense of the city. I’ve done so much tourism: yesterday I spent the entire day with my good friend Konstantine Kakkanias, the artist. We went all around, to the Archaeological Museum, the New Acropolis Museum… I feel very inspired: you might be seeing some Greek inspiration in my collections along the way!