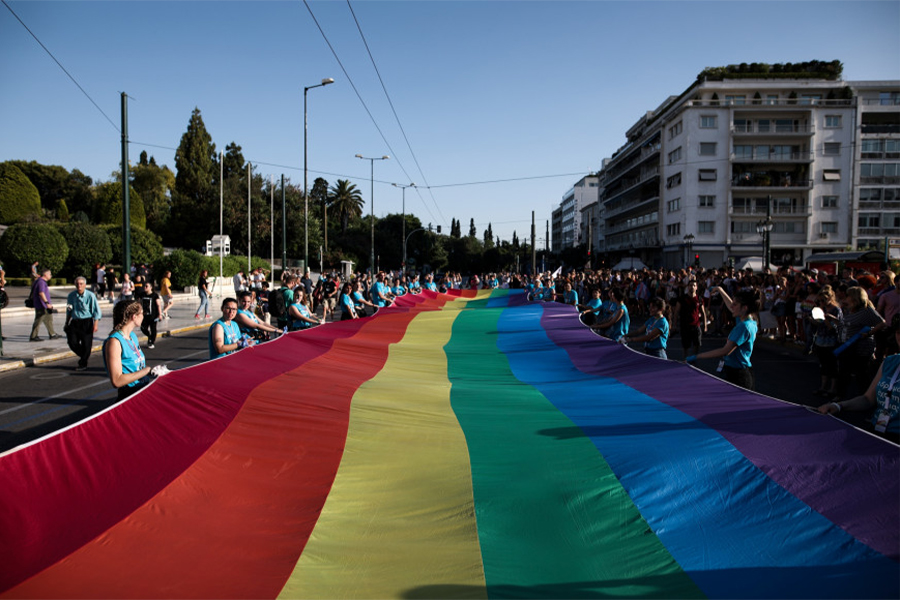 “We are in a better place,” smiles Andrea Gilbert, the driving force of Athens Pride festival. “(But) a lot still needs to be done.” As Athens Pride approaches its 16th outing, Karine Ancellin meets the former art critic from Brooklyn as she reflects on the great positive progress that’s been made in Greece – and the injustices still left to fight. 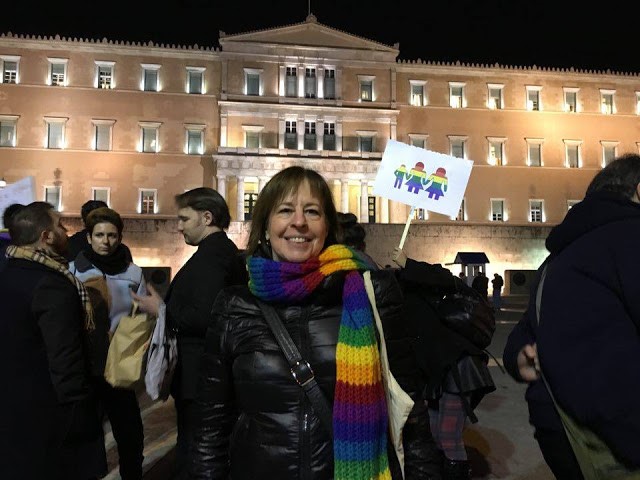 Where exactly did you grow up and did you enjoy that time?

I grew up in the centre of Brooklyn, in a Jewish “ghetto”. It was a long way to anything exciting and I was always on my way out. I wanted to run away from home since the age of eight. I had a little suitcase ready to go. I had read The Boxcar Children by Gertrude Chandler Warner, and I was fascinated by the ingenuity of these orphan children who live in a boxcar, surviving with no money and no adult help. My best friend lived in my building and we got a group of four of us – I’m still in touch with them – and we made our own circle. We were the beatniks; these were brilliant Jewish kids. We had a wonderful school with good teachers. We were a bit wild and we focused on dancing. Every Saturday for five hours we went to Greenwich Village to attend this professional folk dance group, and danced till we dropped. At age 16, we had so much energy. It was Michael & Maryann Herman’s Folk Dance Group. They specialized in Balkan dancing and were known all over the world. They had their own record label.

Did you advocate for a cause at the time?

I went to a couple of antiwar meetings, but my parents were overly protective, and that was one of the reasons why I so much wanted to run away from home. And that’s also why I am perennially single. It’s a high price to pay, but I’ve come to terms with it. So, the Vietnam war was just cooking up, the massive deployments hadn’t taken place yet. At one meeting they talked about the dangers of the war before the world would know. I came home and told my father about it and he gave me a lecture on the domino theory, and said, “You don’t know what you are talking about; this [war] has to be done!” I should add that he later changed his mind abruptly after a good friend’s brilliant son was killed there.

Did you already have the idea of a career in art, or did that come later? Is it through art that you crossed paths with Pride?

I was always interested in making things with my hands, being creative. I was ingenious without making a big fuss. W hen I was in New York before I moved to Greece I was a textile designer for about 10 years and at the time I had a bit of money to throw to different causes, and one of them was Amnesty International. Later, right after I moved to Athens, I went to the book fair in the Pedion tou Areos and there was an Amnesty International stand. So I signed up and started going to their meetings that were near my house here in Exarcheia. They shared their first offices with the National Resistance during WWII, so there was a lot of living history there. The Greek Division of AI was founded in 1974, right after the junta fell, by the people who’d been political prisoners during the junta. Through them, I met Panayote Dimitras, the founder of the human rights NGO Greek Helsinki Monitor, as a translator. But then he discovered all these other minority identities! I became their Jewish expert, writing reports, interpreting and representing them as civil claimant in court. I should say here that activism came into my life at a time when the art world was disappointing me. It was a good balance and I found that I could use my skills in both aspects of my life. I didn’t become active in the LGBT movement in Greece until around 2002, when AI started a group with some people I knew. 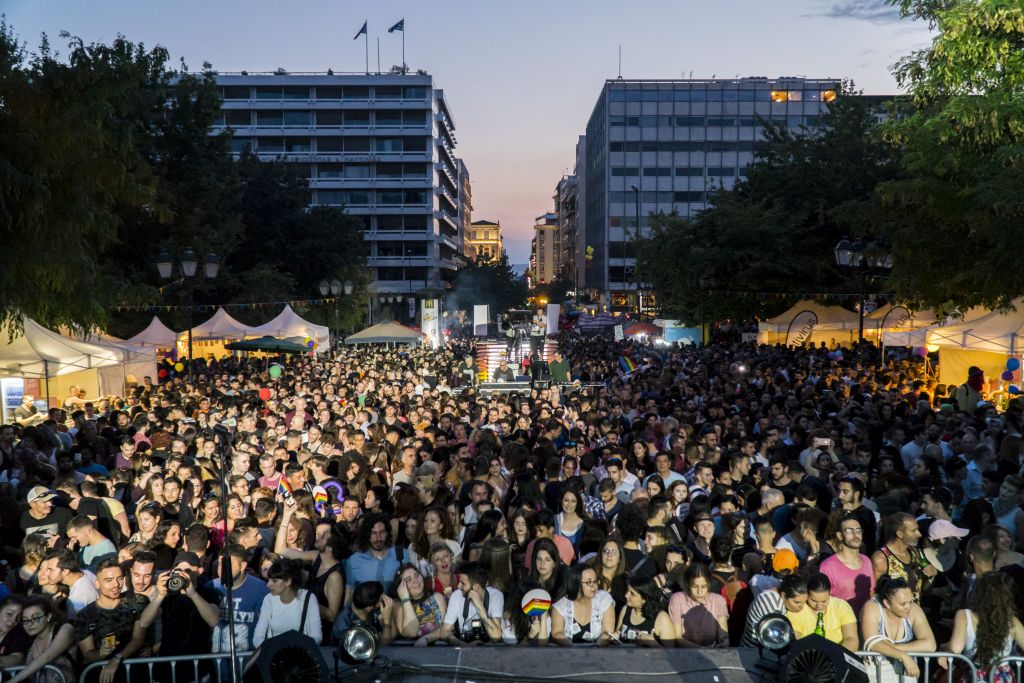 Was this the origin of Athens Pride?

No, that’s a whole other story. You have to realize how closeted the Greek LGBT community was. Homosexuality was not criminalized, but there were “health” laws that made gay life very difficult. Also, the Church and family traditions created a lot of repression. Then the AIDS crisis was a huge blow to the community. Still, there was a very active bar and club scene. In 2003, the gay club Spices was raided by the police – we called it the Greek Stonewall – and they arrested a bunch of people on the spot and threw them into jail in GADA [Attica Police Headquarters]. Their names and addresses were published and one of them committed suicide in detention. That kicked off a series of huge community meetings at the Polytechneio (the Polytechnic) that mostly degenerated into screaming matches. But a number of different groups branched off and I joined a Yahoo email list called Greek Sapphides. This was how people communicated before MySpace and Facebook. I met a lot of people, some I’m still friends with, some are gone, others are who knows where. Anyhow, the women on this list started talking about organizing a Pride and I found the idea exciting. It was what we needed. There had been some attempts at holding a Pride here before 2005, but they were at night, in the dark, and then went indoors, into club spaces. They were commercialized, which is fine. I don’t think there is anything wrong with making money, like raising AIDS funds, as long as it’s legitimate. But these events had nothing to do with the Pride as we know it today. Athens Pride 2005 was the first daylight event and parade through the city centre! In 2006, we registered Athens Pride as a legal entity and I was one of the original signatories and I have been a spokesperson and legal administrator of Athens Pride.

Every Pride is a revolution! Anything that you take to the street in the public space, advocating for yourself and celebrating your identity, it’s all a revolution. People object to the word because it brings up images of violence, but Pride is the opposite. Anything that is remotely unsettling, even within the most legal framework, is considered counterculture in Greece.

Why do you call Pride a revolution? Because you were able to raise awareness?

Imagine, there is still resistance in the most liberal countries even today. I’m sure that even in Sweden, say, in the villages, there are young LGBTQI kids who feel desperate and repressed. Ideally, Pride is an open celebration. It should be a free event for all. Even inside our close organization, people have expressed views we’ve disagreed with and we’ve had problems with the community as well. We’ve had to make some difficult decisions at times but we don’t always know what people are thinking, what people harbour in their own thoughts. Luckily, there are always voices to keep prejudice out and hopefully, they triumph.

Were you targeted by hostile acts yourself?

I was on the front page with my picture several times in the fascist press! On websites, I was called the “dirty American Lesbian Jew who organizes Athens Pride” with the sly question, “Where does Athens Pride get its money?” Implying that I was part of the “all-powerful Jewish Lobby” to subvert “sacred Greek values.” In 2006, I filed a complaint about antisemitic hate speech and incitement to violence against well-known Nazi writer and lawyer Kostas Plevris. When he discovered I was also a spokesperson for Athens Pride, he publicly defamed me every chance he got – in court, in print, in a letter to the Prosecutor! Through the Greek Helsinki Monitor, I’ve won several cases against him. I don’t hide anything, though, and I’ve been photographed on the Athens Pride stage wearing a Magen David. 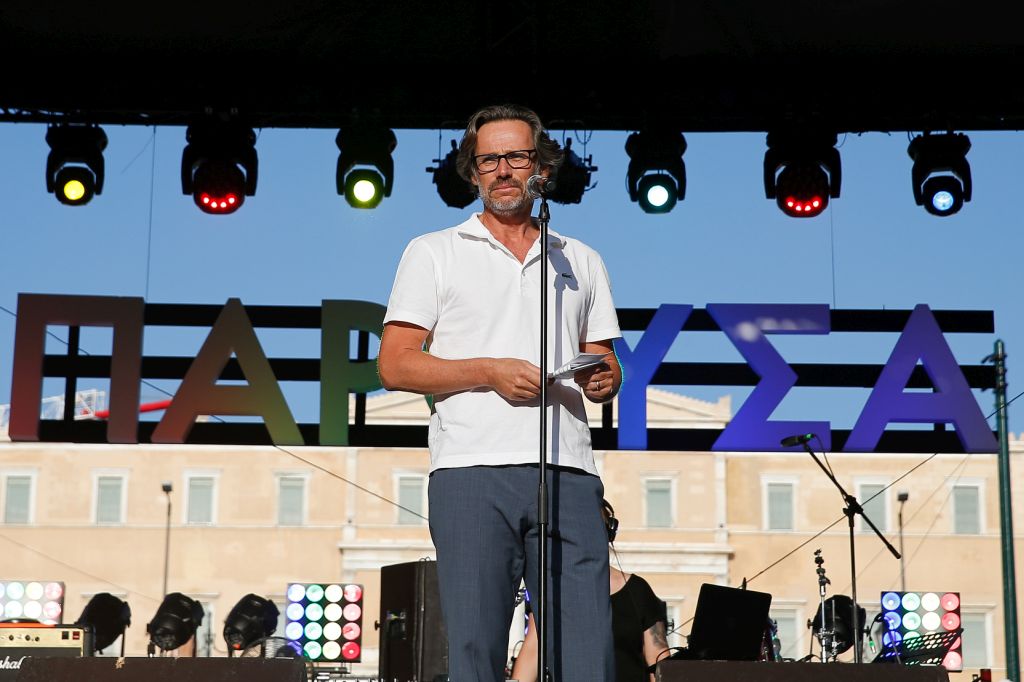 In hindsight, do you think that the work of Athens Pride has changed the mentalities in Greece?

Absolutely! I think the younger generation is much less stigmatized. Athens Pride is going into its 16th year, and it’s in the public eye and finally respected. Certainly, since we moved to Syntagma in 2017, that visibility has been a root for change. We are here and not going anywhere, so enjoy it.

A whole generation has grown up knowing Pride, talking openly about being LGBTQI and what that means.There are programmes on TV at six in the afternoon with men kissing each other, having a family. They may be foreign shows but they are here. We no longer have the censorship that there was only a few years ago. We’ve done a lot of work behind the scenes. Athens Pride is not just the event, it’s much more. We are in the courts. We are in Parliament. We talk to high-level political figures, who speak from the Pride stage so that’s a huge change. We also have important sponsors who are not afraid to tag Athens Pride. This is a huge difference nowadays.

It took a long time for the Greek divisions of international brands to lend their support when other country divisions had been supporting Pride long before that. Companies using a rainbow logo as sponsors of Athens Pride is an amazing step forward in Greece. Besides the necessary financial assistance, it gives us legitimacy and prestige to have these sponsors behind us.

Has Athens Pride had an impact on inclusive legislation in Greece?

Definitely! Athens Pride has wonderful advocates and spokespeople. There is a strong family NGO here, Rainbow Families, and we give them a platform. A lot of this advocacy has been supported by groups like that, some disband and new ones are formed. Some have legal status and others are de facto. We were close to legalizing same-sex marriages, but we’re not there yet. It’s still a sore spot, legal parenthood and legal marriage. We do have a civil partnership, which gives you legal rights but it doesn’t give you parenting rights. The younger generation is going to want to have kids, not just mock marriages, and they are going to want full relationships, like they see all over Europe. 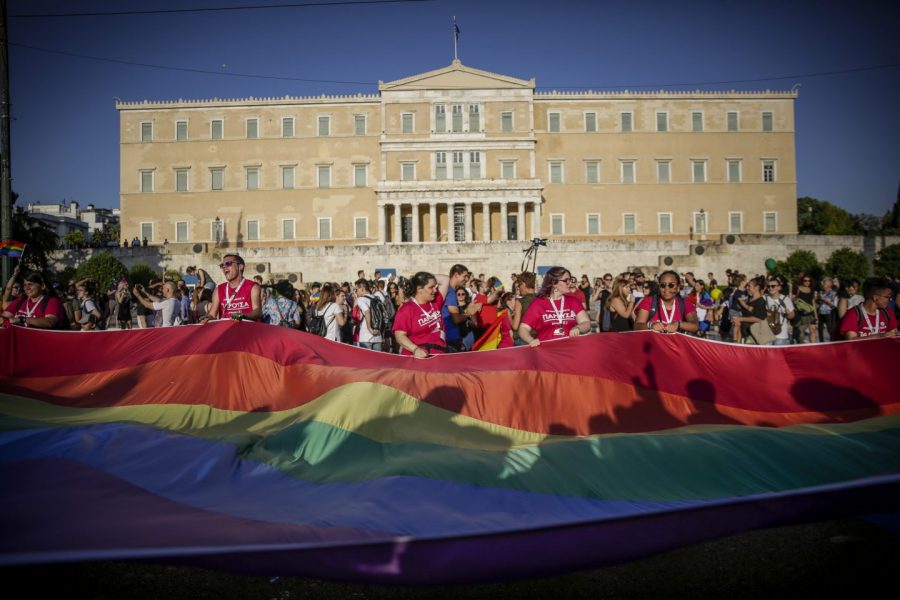 The problem with economic crises and the refugee crisis, and now the pandemic, is that LGBTQI rights take second stage.  There will be conservatives who will fight against new inclusive laws but a vote for civil partnership did pass in Parliament, so there’s hope! There have been also been major court cases against the Church. The decision against Bishop Amvrosios of Kalavryta for homophobic hate-mongering and incitement to violence was a landmark verdict. He had his pulpit for 41 years. This was huge because it debunked the Church, which is a major source of homophobia, transphobia and antisemitism in Greece.

Now we can hope to see less of this kind of bigoted rhetoric – at least in the public domain.  And with social media on the watch, we are certainly in a better place.