Menu
Home | Culture | The Fast and the Furious Future of Fashion

The Fast and the Furious Future of Fashion 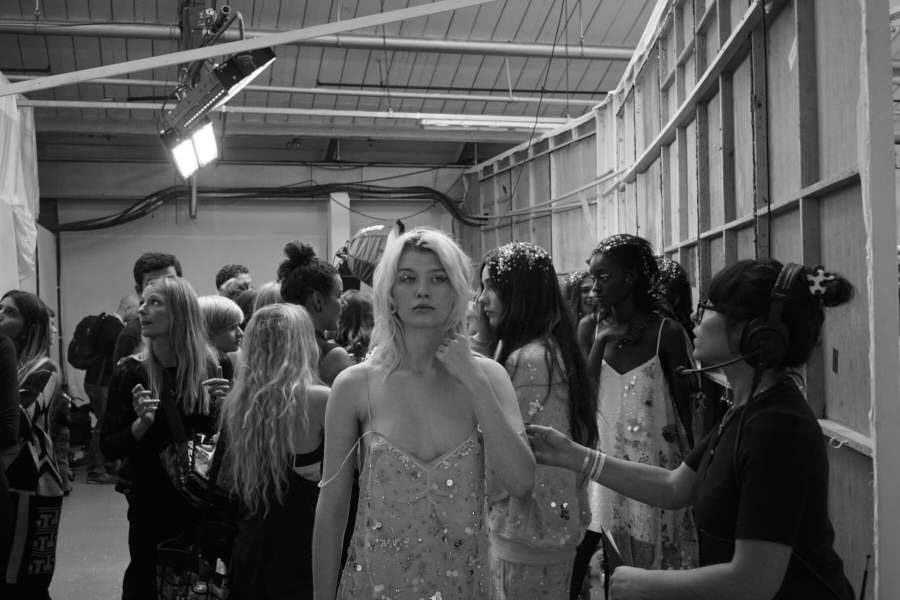 Fashion photographer Omi Chowdhury believes the future of fashion is change and predicts that in a post-Covid world, the market will have to retool itself and descale accordingly. There will be less frivolous commerce and more substantive investment in clothes.

The future of fashion is Change.

The future of fashion is a topic of conversation that has created a cottage industry of conferences every year. The biggest of such conversations take place during Copenhagen Fashion Summit and trickles down to smaller platforms worldwide. To fully grasp the ideas that are floating through this seemingly aesthetics-driven industry you have to imagine a Ted type talk wrapped in another Ted type talk and then start adding Ted talks to this process where the mosaic of ideas worth spreading just becomes a mosaic floor where large multinationals dictate terms on where to stand and whether you can stand on one leg or two legs. And if you are critical of the market forces that fund these conferences, you might find sitting outside the mosaic floor admiring the beauty of Swede symmetry of exclusion and Danish kanelsnegle of cold shoulders. 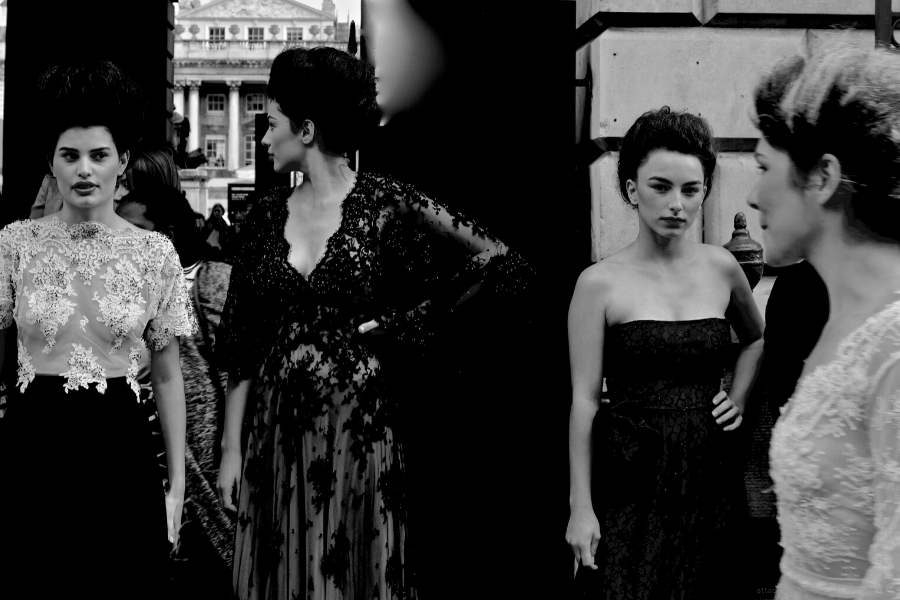 It is a clever pantomime wrapped in organic ideas of sustainability but those ideas are used as padding against real criticism without really changing any behavior either of the MNCs or the consumer. Up until now, this has been the most consistent of ideas of these fashion meet-ups that talk about the future of fashion.

These talks from industry leaders promise equity, equality, sustainability, restructuring, vigilance, pro-environmental policies, and every other talking point large corporations take up to maximize profit. If the corporations are a bit more self- aware and savvy in the moods of the internet they create sophisticated campaigns to make sure maximizing profit looks organic and sustainable and #onfleek to the average consumer.

So the future of fashion has been a lot of talk(s) and it has been a great way to distract from horrible industry practices (and truly horrible environmental records), and a marginal shift to sustainability without truly wanting to understand or implement what holistic sustainability truly means. 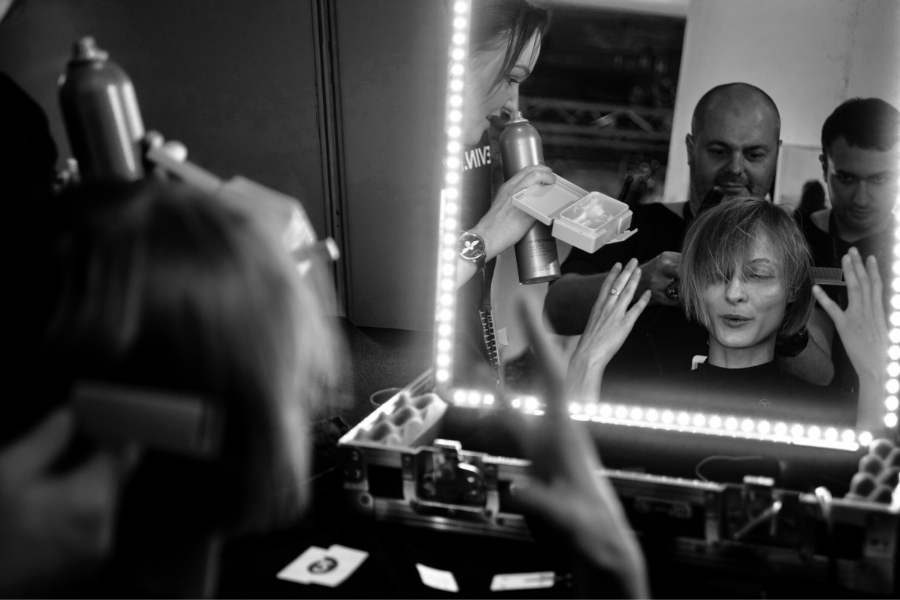 “We are thinking, we are changing, we are becoming more sustainable” is the mostly commonly used line in the industry as it has come under continuous and righteous scrutiny. But what they don’t tell you is that “we are thinking (of maximizing profit at any cost), we are changing (your mind so you look away from the actual problem of overconsumption which we intend to feed and make worse), we are becoming more sustainable (because it is a nice little word and our subcontractors don’t have to be fully sustainable). And that is where the conversation would end.

Then something happens. No, it isn’t Greta Thunberg, it isn’t a few thousand dead Bengalis in Rana Plaza collapse, it isn’t child labor controversies, it isn’t even Donald J Trump, it is a virus (organic and fully sustainable that could replicate itself faster than Zara and H&M combined)  that puts a halt to the over-consumption economy.

Covid-19 goes straight for the jugular of our global economy. It does not care if you are in Downing Street or down on the streets, it goes after the rich, the poor, black, brown, white, man, women, LGBTQ+, children, elderly, young… by that time our resiliency that drives us as a species kicks in and most of us are fully aware of the threat…life as we know it has stopped. And then introspection, dissection of that introspection, and ensuing realizations settle.

Most of us realize the absurdity of what was normal… previously. And as days of isolation turns to weeks and months, the layers of absurdity that has been wrapped around the fashion industry like a Diane von Fürstenberg wrap dress starts to unfurl. 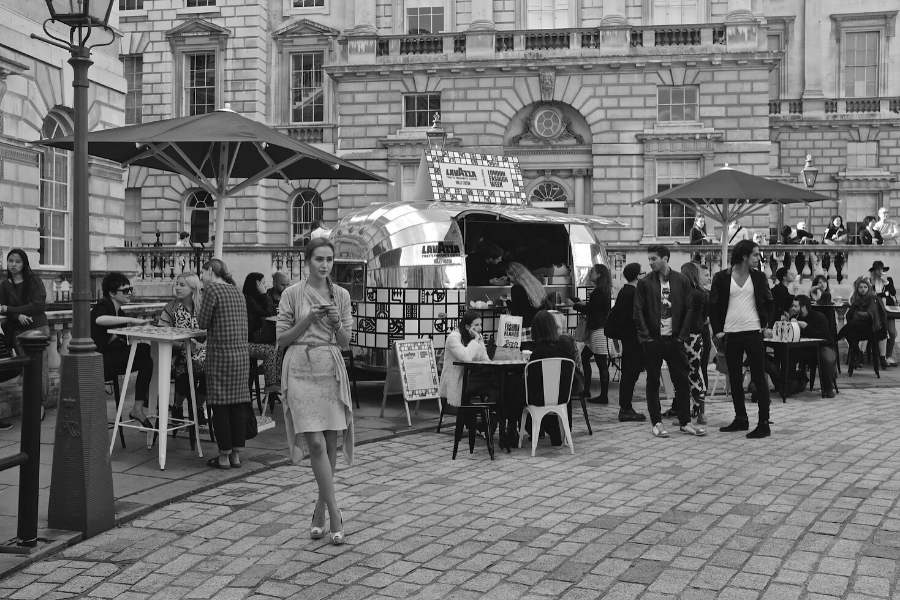 That unfurling also gives way to a lot of other unravelings within the structure of our once ‘normal’ economic activities.

Fast Fashion becomes the immediate victim due to its fast and furious nature. A seemingly immoveable consumption habit that gave birth to no less than 15 billionaires in the last two decades and 30 dollars/month wage for workers in Ethiopia is suddenly displaced. And that is where we are now.

This is a pivotal moment. Does the fashion industry (by that I mean large scale producers) pivot to incorporate the new normal into their marketing campaign so we can digest the same absurd but with a side of self-satisfaction of doing something for the environment? Or does the industry pivot and do a full-on catwalk turn to mitigate the damage it has done to the planet?

There is a whole host of issues that have plagued the fashion industry for a long time along with its environmental impact. From a lack of diversity to a general rejection of egalitarianism and feminism, the industry itself has been one of the vanguards of status quo despite playing dress-up as the complete opposite.

So it does not matter if you are wearing the most comfortable FoG sneakers and the most contentious of McQueen’s gowns, the reality of fashion is that it has been failing as a vehicle of progressivism for a long time despite boldly claiming so. So, the future of fashion more specifically the industry of fashion is going to be based on how fashion evolves from that highly exclusive faux-liberal retrogressive narrative dictated by a few people to a universal language of inclusion.
Some would say that is an academic concern but it is worth noting that it is an important one nonetheless as all progression and regression stems from that specific thread of foundational identity of how the industry views itself and it pushes that identity. 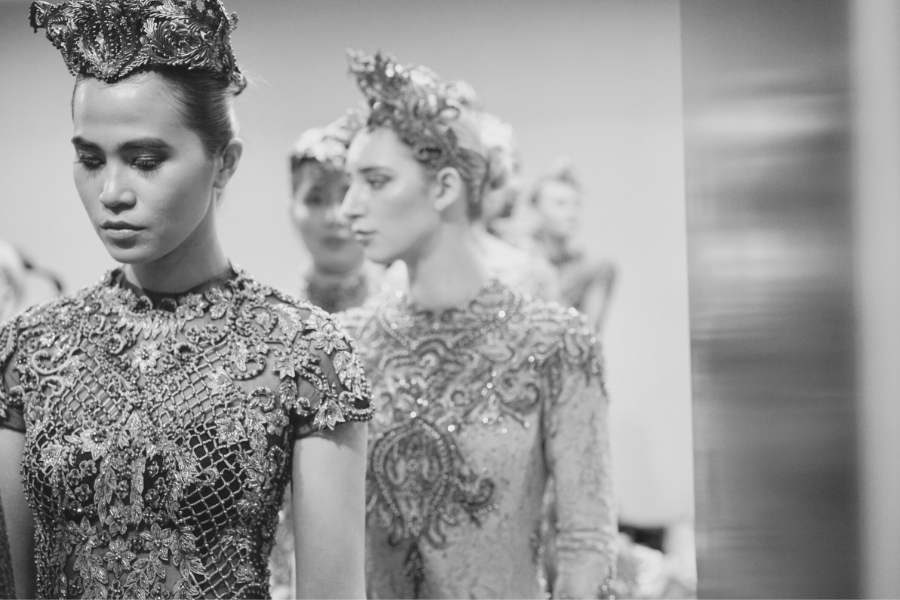 The most obvious impact of the Covid-19 crisis is the last nail on the coffin for sprawling department stores like Neiman Marcus which along with others of its ilk are filing for bankruptcy. Multibrand large stores will likely become less of a franchise and more of a novelty, like typewriters.

On the other hand, the retailers that deal with fast fashion are finding out that the feeding frenzy that gave birth to #ootd (outfit of the day) and the insta-influencer craze is not a necessary commodity anymore.

The idea of owning clothes for three weeks and keeping on refreshing your wardrobe is going to get out of our collective systems like a kidney stone passing through. It will be painful but necessary.

So, the market will have to retool itself and descale accordingly. There will be less frivolous commerce and more substantive investment in clothes (the only market that might not suffer as extensively would be the shoe industry due to the general longevity of footwear vs clothes).
The impact of this behaviour correction of the consumer will provide a platform for the reorganization of retail space and the incorporation of technology. From VR reconstruction of showrooms to apps that work as a virtual tailor are readymade remedies to that issue that will bring in far more innovation than we anticipated. In many ways, smaller designers would find this process to be far more fruitful in the long run than trying to get on the good side of one of the department stores to get a less than stellar contract for the sake of just surviving. 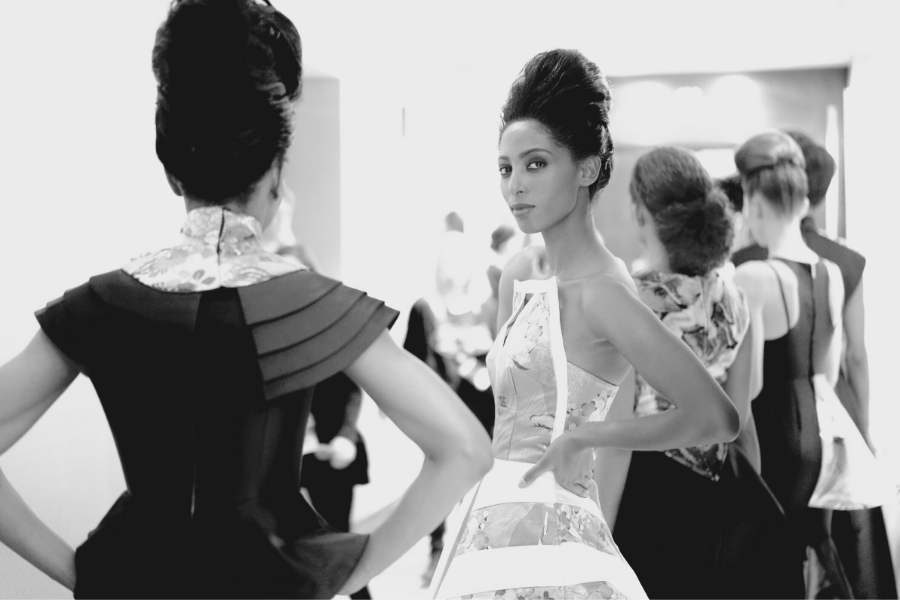 As an industry, fashion has to find a solution for millions of workers in developing countries that provide manpower, raw materials, and address the ensuing environmental degradation that accompanies such a large scale endeavour. But that is primarily the realm of giant corporations. And while descaling will inevitably impact countries like India, Bangladesh, China, Ethiopia and Turkey, the short term cost will outweigh the long term benefits as long as descaling is done with a community focus and profit sharing which has been completely absent in any of the major brands that drive this industry.
There is substantive talk among academia about an Earth- Logic plan that reorganizes and revisualizes fashion as a force of substantive change to mitigate the damage fashion has done to the planet.

Moving away from a Profit-logic model to an Earth-Logic plan is what responsible academics have been calling for long before Covid-19 showed up on our doorsteps. But that call to action has been largely ignored by major fashion groups and brushed aside as too radical, too soon. 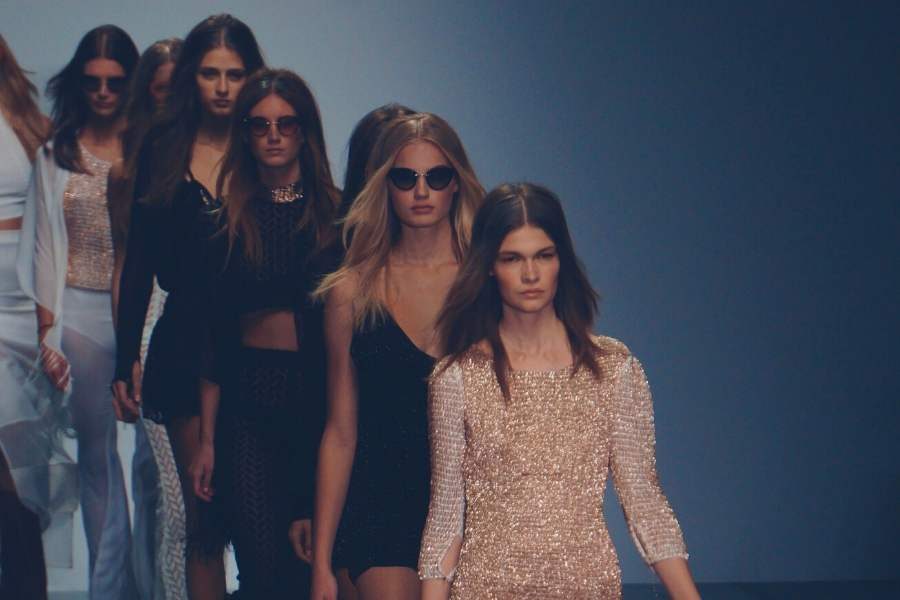 But this brainchild of Kate Fletcher and Mathilda Tham may very well be not the craziest ideas out there to wean fashion of its current trajectory which leads to a ruined planet and on top of millions of ruined lives in the developing world.
On a more superficial level, Fashion weeks will have to be cut down to at most 2 each year vs 6 or 8 each year (which in retrospect seems just ridiculous). For smaller fashion cities like Athens or Copenhagen or Berlin the calculations would need to be even more drastic and would have to come down to one showing a year.

Fewer Fashion Weeks will likely make the designers who are up and coming tailor their clothes to more transitional seasons vs strictly seasonal wear.

Again, the ridiculousness of having this many seasons is sometimes lost on the flashing lights of the runway, but the fact that there is a season called Resort season suggests that no concern for the environment was given to create this white space. Organic fabrics like wool and cotton will likely become more prevalent as the industry and its core shift towards clothing that is biodegradable. 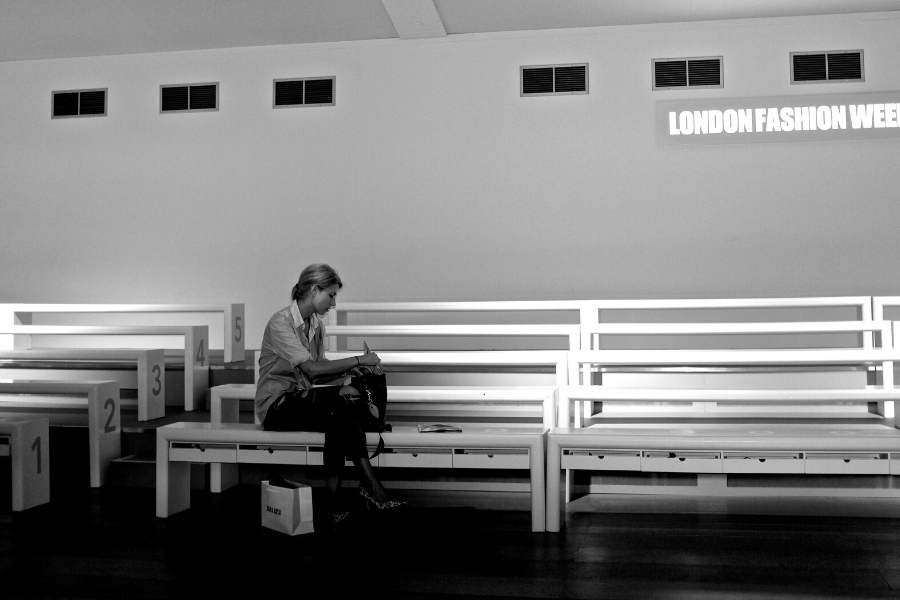 And these are some of the behavioural changes that will likely happen as a necessity and will surely make fashion more sustainable and less of a problem, more of a solution to the crisis of climate change. There will be a lot of birthing pain involved with this process, but it is inevitable in many respects and whoever embraces change will benefit from it.

The future of fashion is Change.

Omi Chowdhury is a Dhaka-born, Harvard-educated War theorist and fashion photographer who writes on liberalism, elite-level diplomacy, feminism and shoots haute couture when nothing else is available! omichowdhury.com 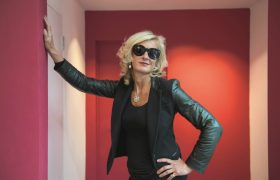 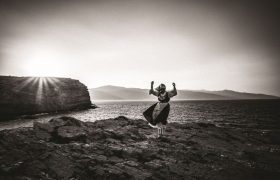 Greece – On the threshold between the West a... 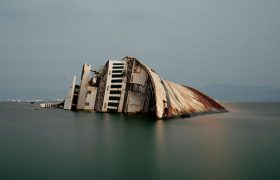 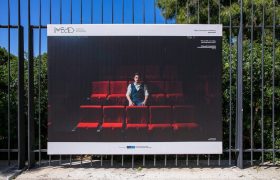 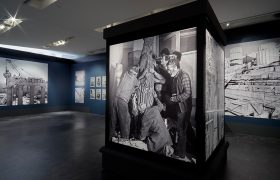 Chisel and Memory: The Contribution of Marble Craf...

Highlights of the Athens and Epidaurus Festival 2020