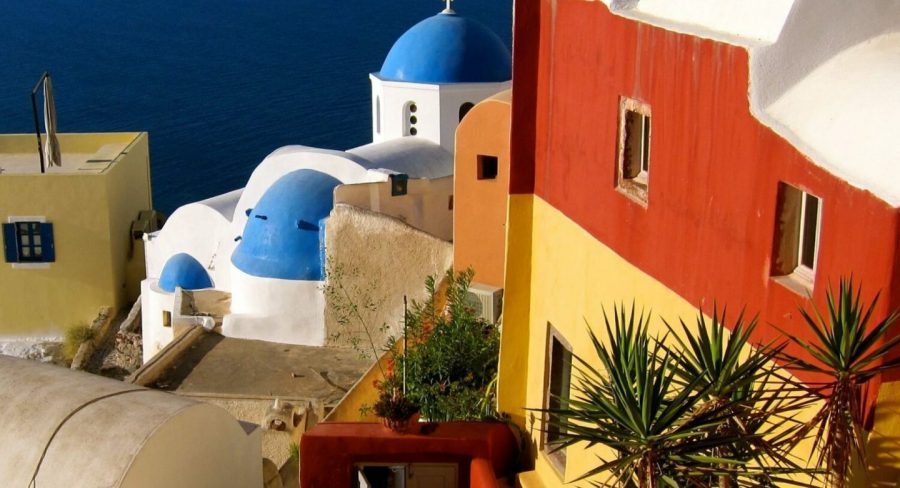 Writer and theatre personality Timothy Jay Smith lived on Vourvoulos, a charming village on Santorini from 1972 to 1974, and wrote a piece about life on the island back then. In this essay, written in the early seventies, he offers a rare insight into life on the now coveted holiday destination, at a time when survival was a daily challenge but life was also uncluttered.

Morning starts early in the village. In the grey hour before dawn, women begin moving about the kitchen while men strap tools to their donkeys for another day in the fields. By the time the sun breaches the horizon, they’ll be at their vegetable patches, and the women will be sweeping the porch or pouring water into a laundry tub.

I wake to these sounds. The morning light comes in through my window silhouetting another distant island. There is no sea breeze and the air is heavy. Flies are suspended in it imperceptibly moving. I step outside and draw water from the well, and pour it over my head. It splashes off my shoulders, cold and refreshing—a jolt to start the day.

I drink hot milk mixed with powdered coffee and eat the coarse village bread. It’s my daily breakfast. I live in Athanasia’s house along with her husband, Manolis, who is half her size, and Yiayia, her ancient mother. Through the flimsy curtain pulled across the kitchen door, I hear Yiayia struggle to get out of bed. She’s almost blind, with glasses as thick as bottle bottoms, and sleeps in the kitchen for warmth. 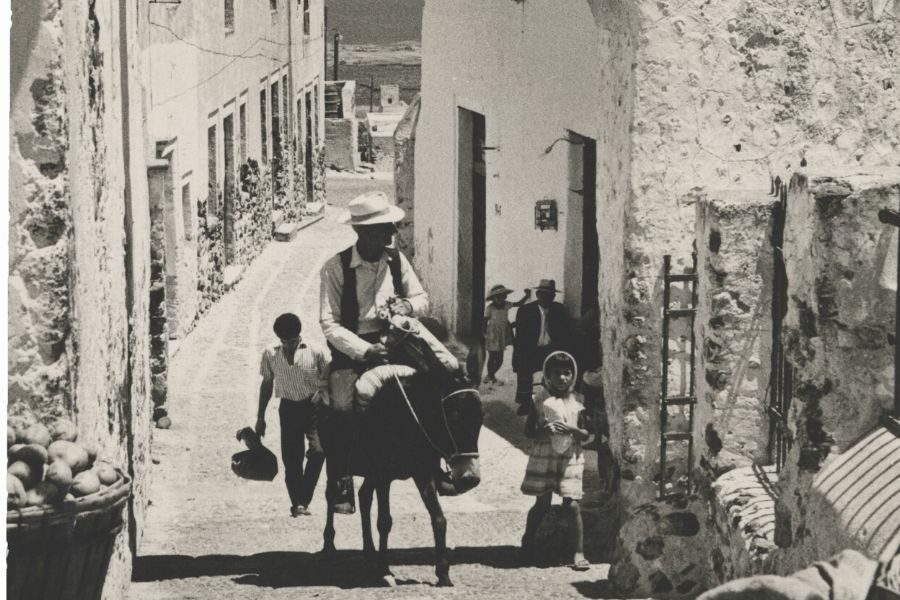 Photo by unknown photographer, courtesy of The Tsitouras Collection

From my terrace I watch the village wake up. Children play in the square waiting for their teacher to ring the school bell. The young men who have jobs in the island’s main town drive off noisily on motor scooters, kicking loose stones behind them. The owner of the dry goods store leaves with two donkeys to pick up supplies. By the time the school has finished raising the flag, another day is in full swing, and that’s my cue to
wander higher up the hill for a coffee with Markezina.

She’s waiting for me, peering into the bright sun, a black speck against whitewashed walls. Long before the first man is in the fields, Markezina has been to church to remember both God and her husband, who was killed by German soldiers when they rounded up and shot the men who had stayed behind to tend the village. She has mourned him looking at his execution square every day since. From her lofty perch, the lush vineyards, terraced by black stone fences, spill away from us to pitch into the sea like green waves. She’s the village folk doctor, hears all the gossip and willingly shares it—gossip is about all life has left her. Gossip, and the church. When we finish our sweet coffee, she sighs—her days are filled with sighs—and leaves to go replenish the oil in the lamps before the icons. 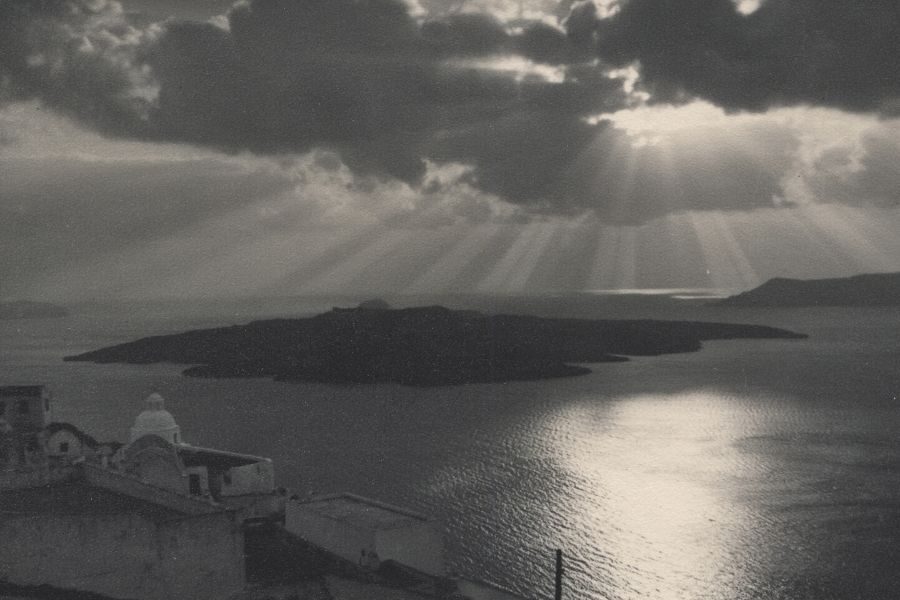 I return to my room to write. As soon as school lets out, the clatter of my typewriter draws a handful of children. I’ve lived here a year and am still a curiosity. Most stand outside my open door, quietly watching my fingers hunt and peck the keyboard. Petros is never so unobtrusive, and shows up wanting to show me something. He has figured out how to type his name in English letters, and does it repeatedly down a page, before tearing it into slips and handing them out like a movie star’s autograph. The children, delighted, run off, and I leave Petros to work out his surname which, at a dozen letters long, should take him some time.

With a lull in their chores until the men return, the women gather wherever there’s a spot of shade in the sundrenched village, talking about nothing much, repeating tired news. I join a group pressed into the shadow of Theodosia’s garden wall. She’s holding a swallow of ouzo on one side of her mouth; the other women explain it’s for a toothache, which prompts them to ask me how I’ve managed to keep such nice teeth. “I brush them once or twice,” I explain, forgetting to specify daily, and they think I mean monthly. Then I realize they think monthly is excessive and daily extraordinary. Now I’m curious how often they brush their teeth, and not a single one owns a toothbrush. I decide to correct that. We all march off to the dry goods store, where there are no toothbrushes for sale, and the owner won’t go on another supply run for a week. 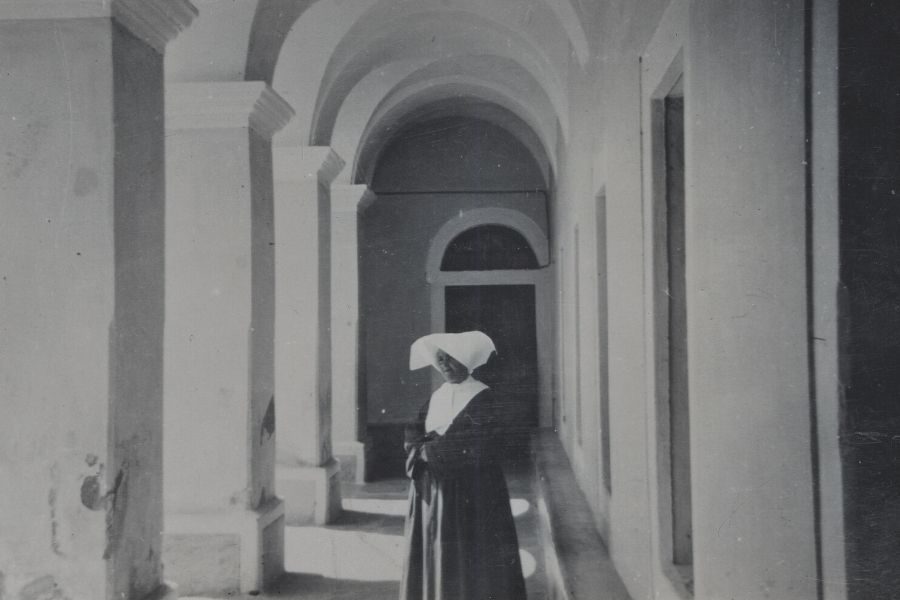 Resigned to toothaches, the women drift off, and I climb the hill again. Manolis, back from the fields, holds his head under the spigot on a bucket, running water over his neck and splashing his underarms. He’s putting his shirt back on when I join him on the terrace. He’s a quiet man, and thinks I am too, though it’s more avoiding his foreign language than inherent quietude on my part. We watch the sun sink lower. I ask him if he’s ever seen the green flash. He’s never heard of it, I’ve actually never seen it, and with no more words we futilely watch for it.

Like clockwork, one or two villagers have shown up for dinner every night since I’ve lived here—without a television in the village, I am the nightly entertainment. Tonight Bagalos appears dangling fish by their gills in each hand. Tall with a sturdy beaked nose, no man has ever had kinder eyes. He’s a regular visitor, and tonight wants me to tell stories of places he will never see. I describe jungles so thick you need a machete to cut through them, and deserts so vast it takes days to walk across them. They are all incredulous, unable to imagine trees and bushes growing so thick when there are no native trees on their own dusty island; and equally incredulous of deserts when they have never seen a landscape without the sea. 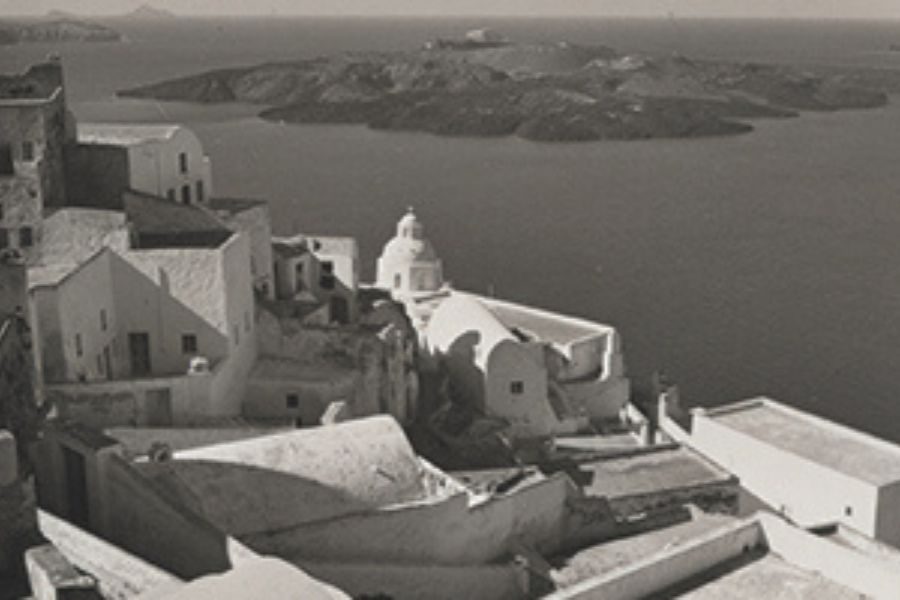 The fish finished, we clear the small table and push it aside. Manolis turns on the radio, his eyes bright, entreating us to dance. Bagalos and I link arms, and the three of us turn in a circle while Athanasia moves things out of our clumsy way. “Opa! Opa!” Yiayia cries out, shaking her cane in the air, and we lift her by the arms onto her ninety-something legs to turn an exuberant circle with us. She flings the cane over her head and Athanasia catches it, and we all land in chairs laughing.

Bagalos has something on his mind. I’ve sensed it all evening. He’s standing up ready to go when he finally tells me that he has a question for which he has never trusted anyone’s answer. He’ll trust mine because I have seen things like jungles and deserts. 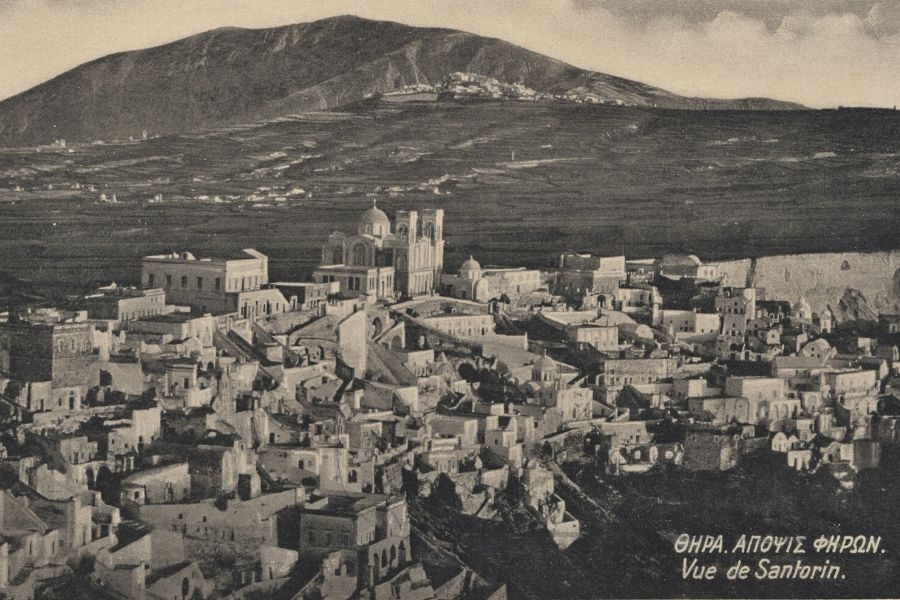 “Does the Earth circle the sun,” he asks, “or does the sun circle the Earth? I’ve heard it explained both ways. I’m a farmer. It’s something I should know.” I tell him what I think and why, though I don’t imagine his farming will change however I answer.

Neither will the next day, when the women begin to move about in the kitchen, the men load up their donkeys, and the sounds they make awaken me. 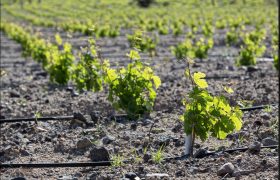