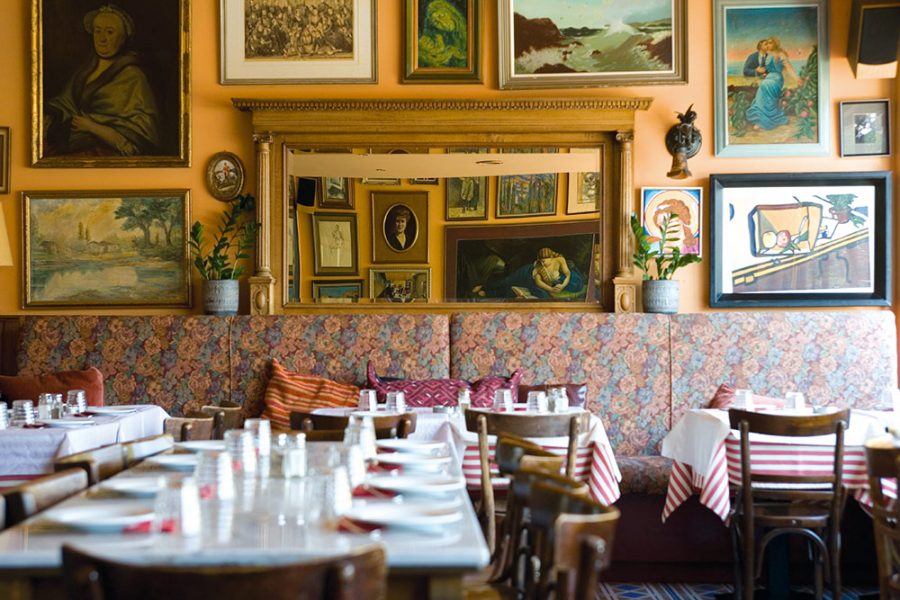 Insider shares our 3 favourite Athens venues where you can take a delightful journey of musical nostalgia, Greek-style. And with chilly evenings still upon us, now is the perfect time of year to cocoon yourself in one of these cosy dens, sit back, and escape to the soundtrack of the past, while enjoying a classic cocktail or memorable meal. 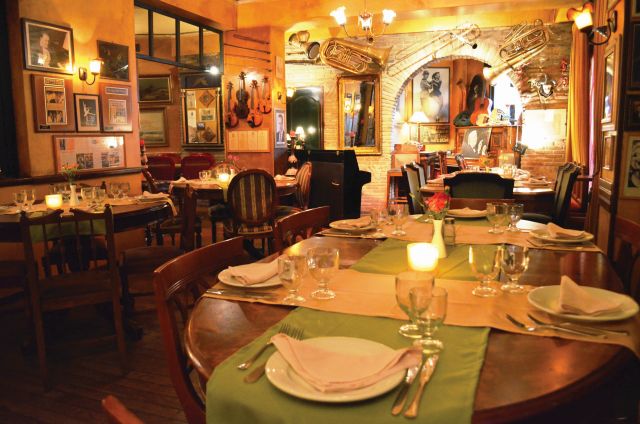 If we had a pedigree as glamorous as Magemenos Avlos, we probably wouldn’t change a thing either! Since 1961, this charming neighbourhood staple in the leafy Pangrati environs of Plateia Proskopon, has served as a favorite rendezvous of musicians, poets, actors, politicians and other fascinating folk.

Modern Day fans go for the enticing echoes of yesteryear; the glorious grub (which champions European tastes); and the marvelous musical accompaniment.

When you walk into the spacious main dining room at Magemenos Avlos (the name means “Enchanted Flute” in Greek), it’s like entering a sepia-tinted time capsule from the mid 20th century. Aged newspaper clippings and photographs of some of the restaurant’s famous regulars (like Oscar-winning Greek composer Manos Hatzidakis who cut his teeth there); the moody lighting; and the antique and violin wall fixtures all set the tone. The great food and music will do the rest. Best bites are the parmesan croquettes (Hatzidakis’ favourite apparently), the cheese fondue, and Magemenos Avlos’ famed Piccata, steak in red wine sauce.  For all its class, the prices remain surprisingly reasonable too.

Until April this year, Kostas Venetsanos, now in his eighties but still going strong, regales regulars with “Stella” and other punchy anthems from the golden years. In evenings past, you might have heard French-inspired Greek New Wave tunes from the mid-60s. Others, you could be tapping your toes under the table to jazz, blues, or an evocative folk singer.

Just like Magemenos Avlos, this treasured Monastiraki institution is so much more than just a place to go grab a quick meal. In fact, it would be a crime to do anything other than settle in and enjoy the “ride” at either restaurant.

The two share more than a hint of the same aura of faded bohemian elegance too. The family-run Café Avissinia is a narrow bright place, filled with paintings, and decorated just like the French bistros in Porte de Clignancourt, with floral wallpaper, stained glass windows and deliberately mis-matched china. It started out many decades ago as a humble tea room in the heart of the flea market and was established by the charismatic Ketty Koufonikola, a Thessaloniki native, in possession of a sonorous voice and aristocratic figure.

By the 1980s, Avissinia was “the” place to party, with reveling groups of friends arriving in their hordes to “belly dance and do the zeibekiko”, according to Ketty’s son Nikolas, who now runs the show. Gypsy traders and walk-in customers mingled happily next to VIP regulars such as Hadjinassios, Kelaidonis, Dalaras, Plessas and Savvopoulos. Customers met and fell in love with their future wives (and return to this day)!

And the beat goes on. On weekends, the square of Avissinia still fills with the sounds of musical merriment emanating from this landmark restaurant (Fridays and Saturday evenings at 9pm-1am; and Saturday and Sunday afternoons from 3pm-7pm). Perhaps you’ll hear Manos play his accordion or Pavlina croon away with her heavenly voice.

The delicious dishes that Ketty conceived remain the star of the show too; pork with leeks and prunes, Avissinia-style cheese, eggplants prepared the rembetis’s way, cabbage leaves stuffed with rice, pork and veal minced meat and served with a velvety egg-lemon sauce…We won’t go on! 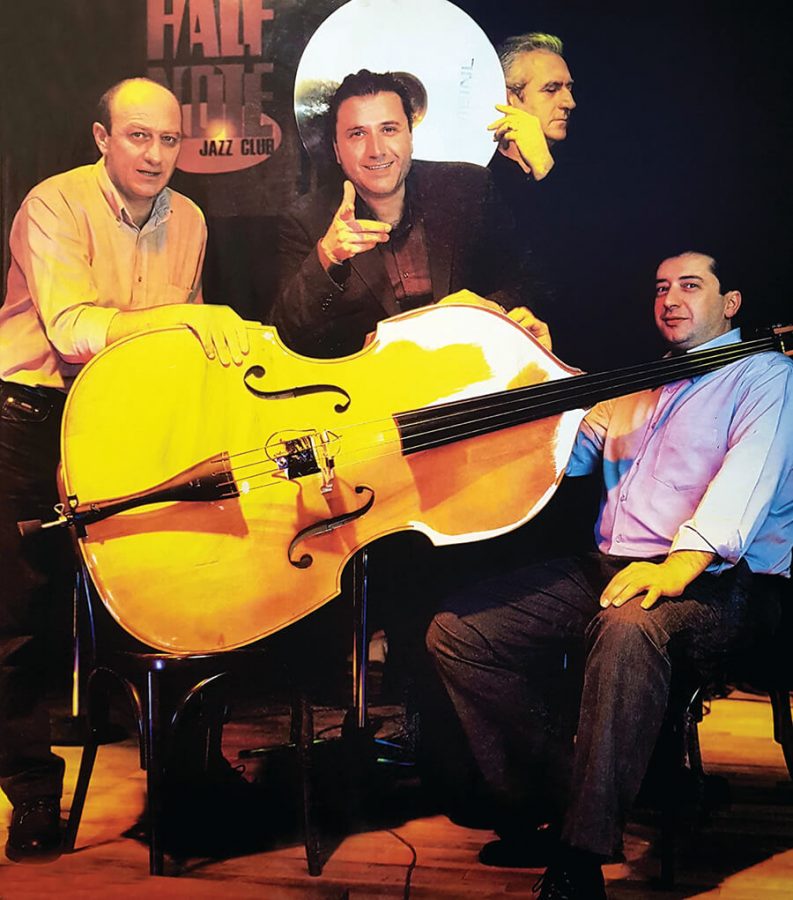 Panagiotis and George Georgas of Half Note Jaz Club

If you’re into your jazz beats – even a little – chances are you’ll already have clocked up more than a few electric nights at this smooth and sophisticated Pangrati hang-out that’s the unofficial home of jazz in the Greek capital. Billed as the original and best jazz venue in town, (it opened in 1979), the Half Note and its cool cat founder Takis was single-handedly responsible for turning the corner for jazz in this country. Today, it’s prized by its loyal regulars for its dynamic, eclectic and ever-evolving line-up. Each season (which runs from October to May; the club shuts down over Summer), the Half Note hosts around 250 acts – many of which are flown in exclusively from Chicago and other famous jazz hubs!

Some of the world’s talent has graced its small and intimate stage over the years – veterans of jazz, blues, soul, gospel, funk and latin – alongside some truly terrific up and coming local acts. You can kick back with a bottle of red and a share platter of charcuterie while you take a musical mystery flight.

Jazz clubs and cold nights make the perfect duet, in our book, so if you haven’t been yet, make a firm date to go “La-La” over jazz at the Half Note this Winter!

We know! But we couldn’t resist not mentioning it. It is a story tinged with nostalgia after all. The name itself (Stoa Athanaton means Arcade of the Immortals) conjures mystery, merriment and nostalgia. Rembetika music – the closest thing Greeks have to Blues – is by its nature, usually a passionate midnight affair. But at the magnificently authentic Stoa Athanaton, tucked away under the arches of the Athens’ Central Meat Market, you can also see Rembetika legends weave their infectious magic during regular afternoon matinee sessions (from 3pm), while you enjoy delicious traditional cuisine with echoes of Asia Minor.

An unmissable stop for those interested in traditional Rembetiko music, this wonderfully atmospheric and iconic club has been running since 1930, and is considered by many to be the capital’s true Temple of Rembetika, rich with nostalgia and celebration for “all things lost”. Stoa Athanaton’s small dance floor is always packed – and you can just as easily find yourself sitting next to the rich and famous, as a meat vendor, unwinding with raki or ouzo after a long day’s shift. Closed during the summer months, we can’t think of many better ways to warm up a dreary winter’s afternoon (or make new friends!).