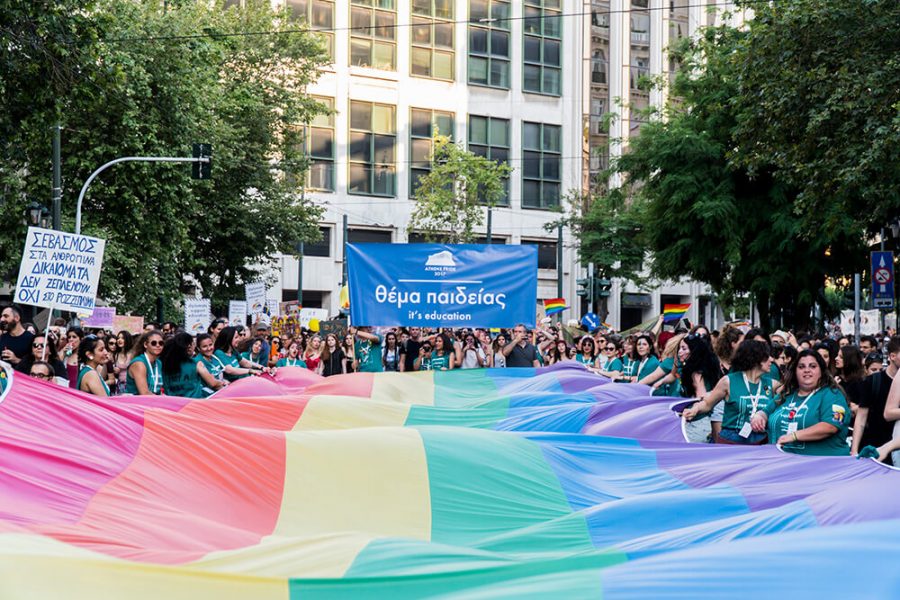 With the capital celebrating its annual Athens Pride Festival this Saturday, Insider reader Gavin Woolard opens up about what it’s like to be a gay expat here in Greece…

Greece has always featured high up on the list of gay destinations, this in part due to a history of homosexual liberties in ancient times. In modern times, the islands, such as Mykonos and Santorini, have often been strong magnets for gay tourists. Popular gay-themed cruise ship tours frequently include Greece in their itineraries.

It was with this in mind, that Athens and Greece evoked for me the ideals of the perfect expat location for a gay couple. In recent years, Greece has added to this image with the introduction of same sex partnership. Although a long way from the ideal equal rights of marriage, it’s certainly a step closer than many other countries have been willing to make. Athens, along with other cities, stages an annual Pride Parade, which for the first time this year, will begin from Syntagma Square (June 9, at 7pm).

Arriving in Athens, one is not immediately confronted with a sense of a gay community culture. Most gay expats at some point end up making their way to Rooster, a lovely café nestled on buzzy Plateia Agias Irinis. From brunch to beers or even lunch in between, this inconspicuous yet friendly and vibrant gay meeting point offers friendly service, excellent food and drinks. A new expat observation is that Rooster functions as a meeting point of all communities. Whether you are gay or straight, one is equally welcomed and as such, it’s a great spot to hang out with friends across all gender identities. Another gay-branded venue I have visited and enjoyed is Sodade, which is a lively gay pub in Gazi (Triptolemou 10). Adding to the Gazi scene is the ever popular Big (Falesias 12). These are only two mentions of an array of bars to choose from in the Gazi area and beyond.

All of this presents a country that I have found welcoming to tourists, gay or straight. In reality though, often, when in discussion with neighbours and acquaintances, they do remain astonished when you as a man mention you are married … married to a man. It remains something which although it is accepted, is often not talked about here openly. Greece is therefore, in terms of gay rights, a country in transition. No country goes from gay discrimination to total equality overnight, it is a process. Greece is no exception. But it is slowly making that progress.

While the islands are often drawcards for gay couples visiting as tourists, I was intrigued to know how the hinterland of mainland Greece would fare. Would it be more conservative? Would discrimination persist? As a couple, I always book a double room. Travelling in Greece has resulted in mixed yet always polite and sometimes comical reactions. As a same-sex couple, we have never been met with a rejection of our booking or any outright negative comments here in Greece. Rather, it has been either the naivety of wanting to make an extra bed as they thought it was a couple arriving (a straight couple) to a genuine curiosity about our relationship. The increase in the popularity of gay holiday booking apps such as mister b&b is also evidence of the community itself tapping into the gay tourist market.

Additionally one sees the service of new start-ups such as the Beloved Republic (thebelovedrepublic.com) which caters to gay wedding celebrations in Greece. Although same-sex marriage is not yet allowed, the focus on celebrations has begun to gain momentum and Greece is scene by the gay community as a destination to celebrate their relationships in.

Gay expat life in Greece has been one of a welcoming country. One that is curious, although not yet totally comfortable with the idea of gay liberation. The more Greek same-sex couples continue to lead their lives openly and publicly, the more this will become a society of acceptance and integration.

As a diplomat’s spouse, Gavin Richard Woolard is a professional expat who has also lived in the Netherlands, South Africa and Vietnam. During his overseas postings, he has occupied himself as a hobbiest photographer, volunteer and keen traveller.

Confessions from a Posidonian Insider

The Crown, Season 3: A slice of Greek History too!