Confessions from a Posidonian Insider 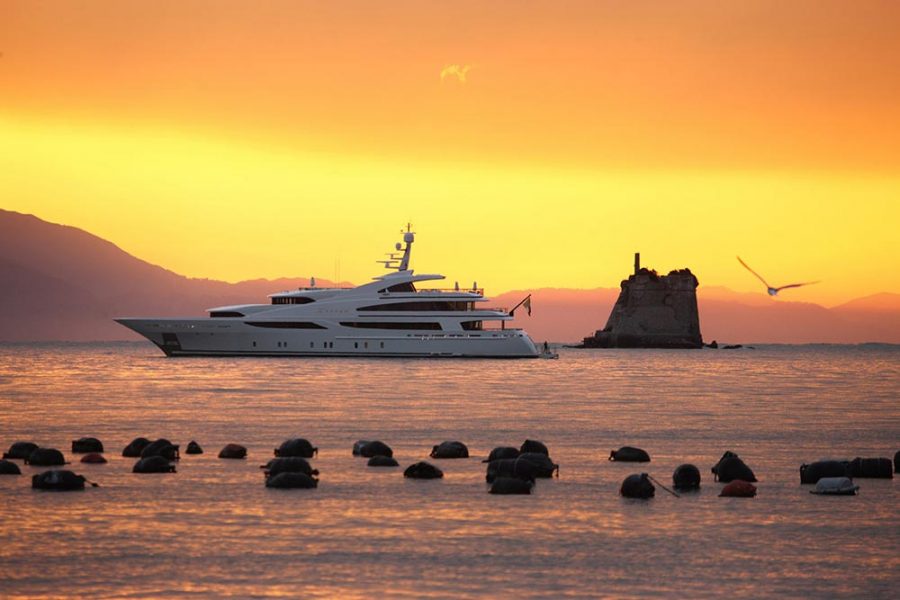 What’s it really like at the world’s most high-octane shipping event? Thousands of shipping executives from around the globe are about to converge on Athens once again for Posidonia – that biennial whirlwind of lavish parties by the sea, elite sporting events, power networking and top-level think-tanks.

Posidonia 2018 officially sets sail from June 4-8 … but for many, the parties and receptions begin in the week or so before. While the high-profile forum is mostly a closed shop, members of the public can attend the Posidonia 5km running event (Sunday, June 3) and also the vast shipping exhibition held throughout the week at the Metropolitan Expo Centre.

With the shipping industry still coming out of its recent downturn; it’s a chance for people to let their hair down and put their worries on ice (along with the champagne) for a few feverish days. Amanda Dardanis spoke to one Posidonia veteran to find out exactly what the big deal is (and where the biggest deals get done!)

Let’s Get This Party Started Right

‘This will be my 8th Posidonia Week. It’s hard work but I love it. My preparations for Posidonia usually start a couple of weeks before. I get all my best frocks out. Get them all lined up, along with all my best heels and handbags!

The whole international shipping community descends on Athens – in particular the Athenian Riviera. It’s a time for people to re-connect with their clients; to really network; to hand out a lot of business cards (literally thousands change hands!) and to meet new people with the potential in future to do business all round the world. Germans, Norwegians, English, Japanese, Chinese – you really get everyone. You lay the groundwork here, but the real deals are done later on – after you get back from the golf courses and the yacht parties.

There’s the huge Posidonia Exhibition, which is like an absolutely vast “show and tell” of all the latest shipping happenings and technology, out near the airport. There are about a thousand exhibits from everyone from shipyards to brokers to banks to engine makers to ship registers to rope makers to oil traders! People do have a mosey on down there during the day to take a look around. But the thing that really makes Posidonia are the parties. 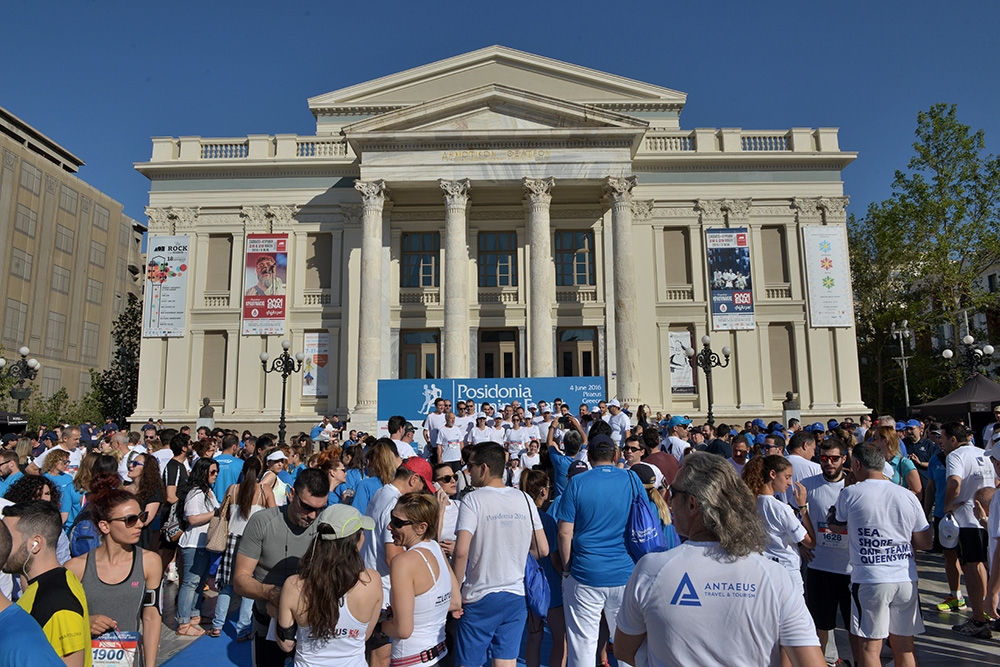 In the past, the receptions were extremely extravagant. If you go back 6 years ago, celebrations went on for about 3 weeks. Some of the functions are still very lavish, like the Clarksons event, which is traditionally held out by the Astir pool for about 600-700 people (this year, with the new Four Seasons hotel not yet open, they will split the event into several smaller parties, I’m told). My first Posidonia event 16 years ago was Clarksons. They staged the most incredible laser show that I’ve ever seen over the water and the champagne flowed all night. At the last Clarkson’s party, they ran out of booze when about 2,000 gatecrashers turned up.

Aegean Petroleum are also known for putting on one of the best Posidonia bashes in town. In 2014, they had synchronized swimmers and Antonio Remos singing. And some of the big ship owners have thrown parties where they have their yacht parked outside the venue.

During the official Posidonia Week, there’s a lot going on every night. There are parties in Piraeus, at the Yacht Club; loads going on at Island in Varkiza; at Asteras in Glyfada. You do have to pick and choose what you’re going to go to or you’ll be exhausted half way through the week.

Marinakis (the shipping tycoon Evangelos Marinakis of Capital Ship Management) is another of the really hot tickets to get hold of. During a recent Posidonia, they had dancing girls and Gloria Gaynor belting out classics at Balux Prive. A lot of the parties are held around this part of Athens so you can literally spend the night hopping from one party to the next. Although rumour has it that some of the big shipping companies will move their parties to Stavros Niarchos this year.

Lots of companies hold Open Houses as well. Some of the shipping offices are very impressive; really beautiful, and they open them up for the day.

But actually, the best networking is done at the smaller parties. Restaurants like Rafale (in Vouliagmeni). Or exclusive sushi fests at Nobu. I can’t mention names, but at some of those smaller, more intimate gatherings of a dozen or so, you can sit down and eat, or have a cocktail, with some of the world’s top ship owners.

So if you get a ticket to one of those, you may actually meet a real shipping tycoon. Or at least have a chance to sit next to someone very senior. And that’s going to get you more work.

People do jockey for the best tickets during Posidonia. Everyone’s trying to get to these parties. The week before, I’m suddenly very popular! Friends call me out of the blue. They’ll say, “I think I’m going to come to your party and bring my friend, is that okay?” They’ll literally invite themselves!

A lot of parties do seem to be on lock down now since the crisis. For instance, last time, Aegean sent a ‘gold bar’ in the post and you had to scan in a code that then told you how to RSVP. Capital is strictly barcoded, and Clarksons release a secret code just before the event to stop party crashers.

In recent years, there’s definitely been a paring back of the scale of events. There was some very bad press during the worst of the crisis. Which to me was unjustified. People in shipping work extremely hard. And so they throw a party every two years for all the people who help them.

But I would say that this year, for the first time in recent years, most ship owners are a bit more ‘cautiously optimistic’ now that there have been some green shoots of recovery appearing in the shipping markets.

One thing you’ll always notice is the way that the prices in all the hotels soar during Posidonia. “Posidonia Prices”, we call them. The lucky people are staying down in Vouliagmeni because the hotels there are booked two years before! All the Riviera hotels are packed.

Posidonia is a big deal because everybody comes. International visitors love it here. They have a lot of goodwill towards Greece and they really appreciate the Athens Riviera. And because it’s only held every second year, it doesn’t feel like “same old, same old”, like it might if it was an annual event. 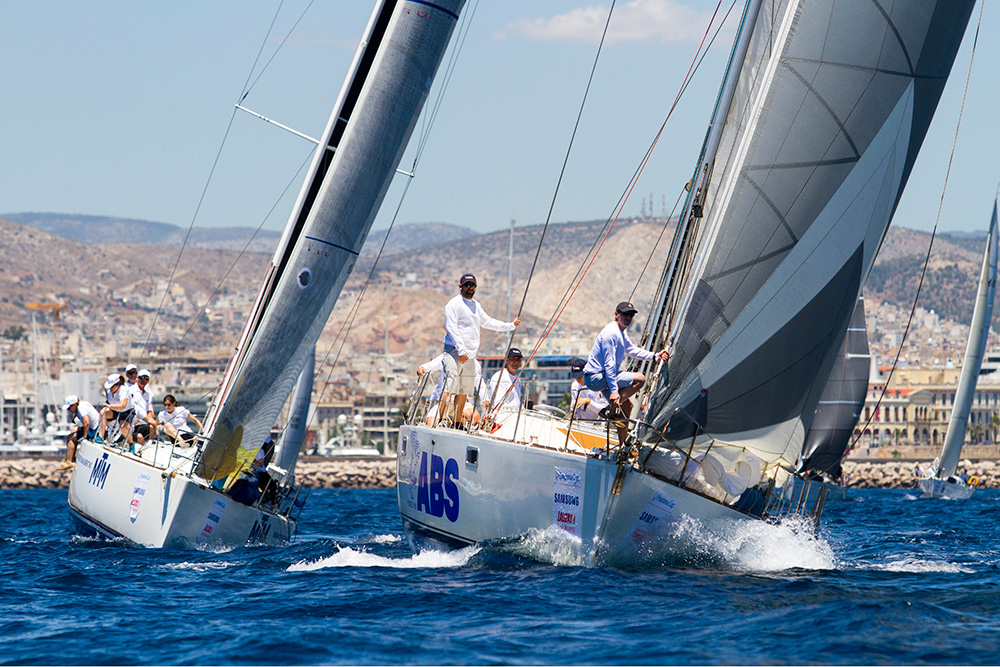 People are generally fairly well-behaved at the official receptions. Especially the Greeks, who tend not to over-indulge anyway. You might let your hair down afterwards by going to a bar with a smaller group, or on to the bouzoukia.

The whole sporting calendar aspect of Posidonia has also become more of a “thing” in recent years. There’s the Golfing and Soccer Tournaments; the Racing Event. The Yachting Cup especially is always extremely competitive. Some of the big owners decide “we will win this year” and hire professionals to crew for them. People get very excited about the yacht race.

It is exhausting sometimes going to 3 parties in the one night and then having to get up and go to the office the next morning. And you do see a lot of the same people everywhere. But at the same time, it’s really nice to feel part of a community – and really fun to be on the inside of it all.

Posidonia International Shipping Exhibition 2018 officially runs from June 4-8. For more information on Posidonia events such as the Metropolitan Expo Centre and the Posidonia Run, visit www.posidonia-events.com

My Athens … is Free, Fun and Funky!