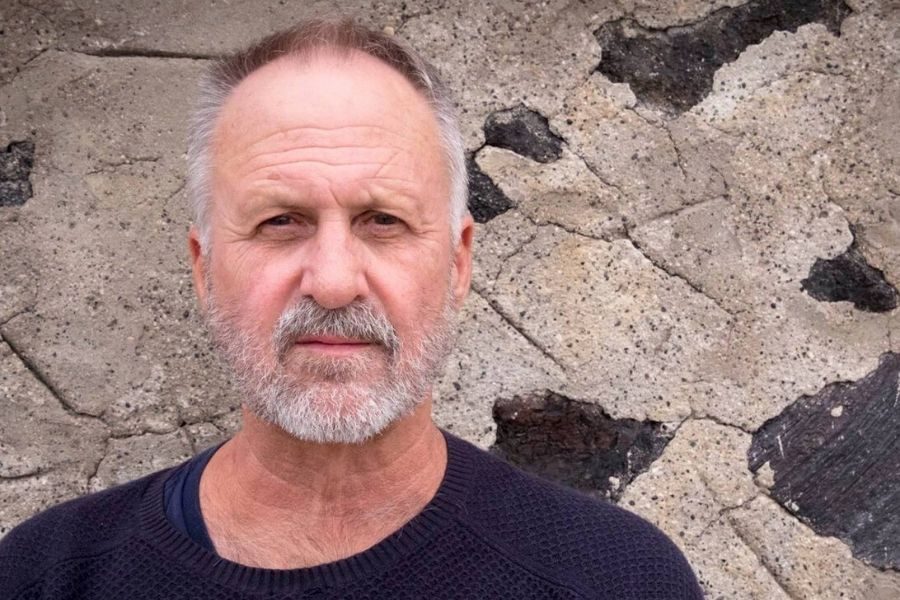 Timothy Jay Smith’s Fire on the Island unveils the complex layers that guise the sun-drenched, bougainvillea-tinted Greek isle, blighted by declining tourism and the seemingly intractable refugee crisis. There are family feuds and a corrupt clergy. There is racism and homophobia. But there is romance, humour and mystery too! An engaging summer read for the travel-deprived, all the more transporting in our confined times.

Fire on the Island is a light, romantic thriller set in contemporary Greece, with a gay, undercover Greek-American FBI agent Nick Damigos investigating a series of mysterious fires on this fictional Greek island. A long-time devotee of the Greek islands, Smith paints the setting with gorgeous colour and empathy, while shedding bright light on the very real challenges of life in contemporary Greece. Timothy Jay Smith peoples his books with the characters he has encountered over his years crisscrossing the globe and Fire on the Island is no exception. From hardened fishermen to corrupt priests and entitled officials, Timothy Jay Smith creates an engaging cast of well-fleshed out characters that draws us into their murky, insular world of distrust, suspicion, heartbreak and rupture as external forces tear at the island’s fragile social fabric. The novel does an excellent job of not only creating the tension of the thriller and the passion of the romance but demonstrates the real dilemma of communities caught between accepting and helping refugees to a decline in tourism revenues. Fire on the Island is slated for release on July 7, 2020 and makes for a light, insightful and entertaining summer read.

Blurb from the jacket cover:

An arsonist threatens to burn down a Greek island village by blowing up a fuel tank in its harbor. Alarmed by the possible disruption of the local Coast Guard’s vital operations, Nick Damigos, the FBI Agent posted to Athens, arrives to investigate undercover. The arsonist has struck eleven times in as many months, each fire coming closer to tiny Vourvoulos, and each followed by a mysterious poison pen letter. The last one makes it clear: the arsonist plans to strike within days. With no clues, Nick searches for a motive that would drive someone to such a destructive act. He discovers a village embroiled in conflicts, some dating back generations, and uncovers earlier crimes—all casting a wide net of suspicion.Gradually the mystery is revealed through the interwoven stories of a struggling restaurant owner and her feminist teenage daughter, a seductive widow and lovelorn waiter, a scurrilous priest and patrician mayor, and a host of colorful characters who paint a portrait—both humorous and soulful—of Greece where the past mingles with the present. While sorting it out, Nick’s life is threatened, and he falls in love with a young waiter who becomes his chief suspect. Miscalculating the plan of attack, ultimately Nick has only minutes to stop the arsonist. He races for the fuel tank and toward an unexpected conclusion. 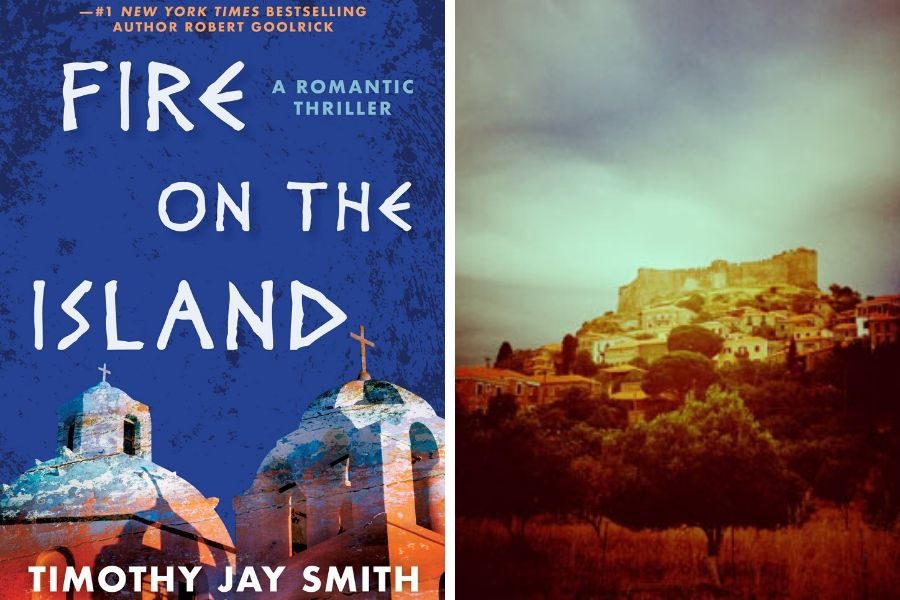 Excerpts from FIRE ON THE ISLAND by Timothy Jay Smith

Nothing had prepared Nick for the sheer beauty of the village perched above the purpling sea. Atop the steep hill, the last rays of sunset licked Vourvoulos’s lofty castle walls while necklaces of red-tiled roofs clung to the cliffs below. He pulled the small car off the road and grabbed his binoculars.His socks collected burrs as he trudged through the dried weeds to stand as close to the cliff’s edge as he dared in the gusting wind. Through the binoculars, Nick slowly panned the houses spilling down to the water’s edge. From a mile away, he couldn’t make out much detail, but after too many hours flying economy class, he was just glad to know that somewhere in that tangle of stone buildings was a bed with his name on it. He heard the putt-putt-putt of a motor and spotted a fishing boat aiming for the village’s small port. Shifting the binoculars, he searched beyond Vourvoulos’s headland for the black speck of an approaching raft silhouetted against Turkey’s distant shore. Nick didn’t expect to see one. The refugees usually arrived at dawn not sunset, and with winter approaching, their numbers had started to drop; though the traffickers would ensure that they didn’t stop altogether. Misery drove their business, and a few refugees drowned in the narrow channel wouldn’t change that. Nick was still looking for rafts when he smelled the smoke. The wind carried it to him. He panned the village again, looking for its source and saw nothing. Then he scanned the cove-dotted shoreline. At first he mistook the flames for the sunset’s reflection off a limestone outcropping, but with a second look, he saw the wind pushing the fire quickly uphill in the dry brush. A gust sent sparks into the tops of the tall trees overhanging a lone house. In its yard, a dog, barking frantically, strained at its leash. Nick sprinted back to his car.

Those were the thoughts beleaguering Nick as he pulled himself through the water, his strokes strong and steady, stopping only when he felt the currents streaming from the north grow colder and stronger, signaling an approaching storm. Ahead of him, Turkey didn’t seem that distant. A good strong swimmer could make it across the channel in decent weather. He imagined many lesser swimmers had drowned trying. From the Turkish side, the narrow channel made Europe so close, too tempting for any desperate person who could swim not to try. A channel so narrow that whole populations had been exchanged across it, yet wide enough to nurture enduring enmities. Glancing back, Nick wasn’t out as far as he thought. The channel was wider than it seemed. He wouldn’t necessarily count himself among those who could swim the distance, but out of desperation he would have tried. Fortunately he never had to. Life had not put him on that far shore looking west. He turned around and swam back.

Fire on the Island won the Gold Medal in the 2017 Faulkner-Wisdom Competition for the Novel, and his screenplay adaptation of it was named Best Indie Script by WriteMovies. Another novel, The Fourth Courier, set in Poland, published in 2019 by Arcade Publishing, received tremendous reviews, and is a finalist for Best Gay Mystery in the 2020 Lambda Literary Awards. Previously, he won the Paris Prize for Fiction (now the Paris Literary Prize) for his novel, A Vision of Angels. Kirkus Reviews called Cooper’s Promise “literary dynamite” and selected it as one of the Best Books of 2012. Tim was nominated for the 2018 Pushcart Prize. His stage play, How High the Moon, won the prestigious Stanley Drama Award, and his screenplays have won competitions sponsored by the American Screenwriters Association, WriteMovies, Houston WorldFest, Rhode Island International Film Festival, Fresh Voices, StoryPros, and the Hollywood Screenwriting Institute. He is the founder of the Smith Prize for Political Theater.

Under lockdown no more