The Baklava Challenge: Master this Greek dessert with an easy-to-follow recipe 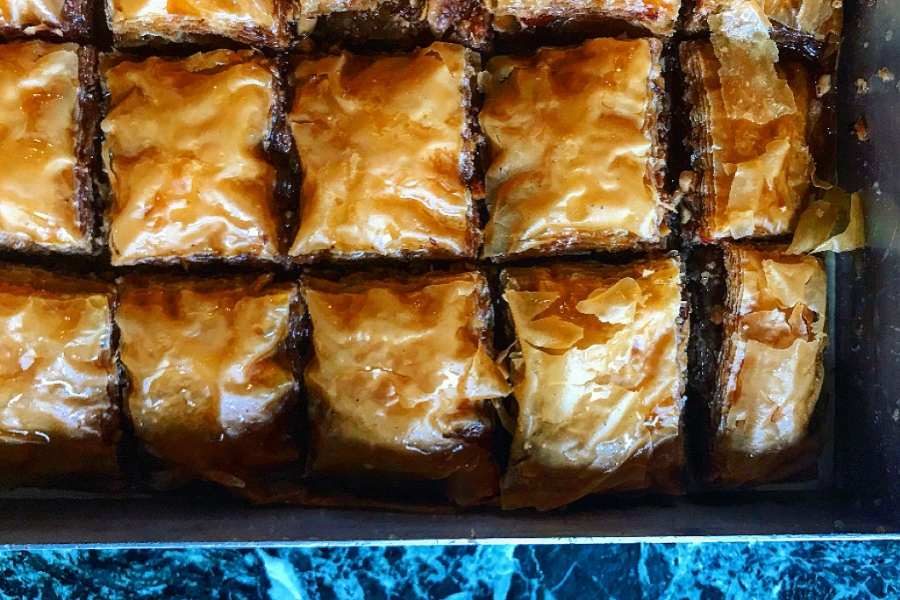 Make the most of the lockdown and try and master a few classic Greek desserts. Private chef and culinary expert, Christina Vlahoulis, is spending quality quarantine time in her Athens kitchen, whipping up a storm of Greek delights such as the always classic baklava. It’s time to face your fears of phyllo and dive head first into this baking challenge.

Preheat the oven to 180°.
Combine the chopped nuts in a mixing bowl. Add 1/4 cup of the sugar, cinnamon, and ground cloves. Stir to mix.
Unroll phyllo and measure briefly against a 33 x 23 x 5 cm baking pan or a pyrex dish. Trim a little of the phyllo to better fit your baking dish.
Now spread the phyllo sheet on top of a damp towel and cover with a second damp towel. This will help keep the phyllo dough from breaking while you work to assemble the baklava.
Lightly brush the baking dish with a bit of the melted butter. Take one sheet or two of phyllo and line the baking pan with it, fold in any excess. Brush the phyllo with butter and gently press in the corners and sides into the baking pan.
Lay another couple sheets on top, brush with butter, and press into the pan as you have done with the first couple sheets.  Continue layering and buttering each layer until you have used up 1/3 of the phyllo package – about 7 layers. Distribute half of the nut mixture evenly over the top sheet.
Layer another 1/3 of the phyllo following the same process as before. Now distribute the remaining half of the nut mixture over the top layer.
Layer the remaining phyllo sheets following the same process as before. If needed, trim off excess phyllo. Generously brush the very top layer of phyllo with butter.
With a knife, cut diagonal lines, 1/2 inch deep, in the phyllo to create 4cm diamond pieces. Do not press the knife
all the way down.
Bake on a low rack for 45 minutes to 1 hour, or until golden and crisp. Because ovens vary, be sure to check
your baklava half way through baking.
While the baklava is baking, make the honey syrup. Place the sugar and water in a saucepan and heat over medium heat, stirring occasionally, until sugar dissolves. Add the honey, orange peel, whole cloves and stir to mix. Bring to a boil, then lower heat and let simmer for about 25 minutes. Remove syrup from heat and let cool to lukewarm. Add orange juice. Remove the whole cloves.
When ready, remove the baklava from the oven and immediately pour the cooled honey syrup to cover the entire
hot baklava. Allow baklava to cool and to completely absorb the syrup.
A few hours later, cut the baklava carefully through the earlier marked pieces and serve.