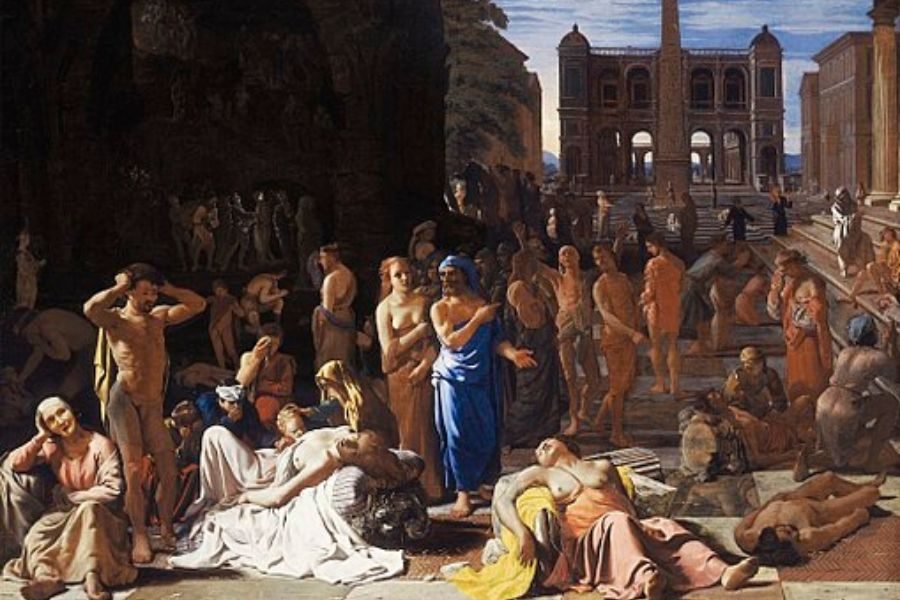 Sherri Moshman-Paganos traces the history of the deadly plague that almost decimated Athens in the Peloponnesian War. Thucydides, who so clearly etched the horrors of the Black Death in the ‘History of the Peloponnesian War’ stated that ‘the perceived impact of the Athenian plague was such that people ceased fearing the law since they felt they were already living under a death sentence.’   From 430 BC, the plague struck terror into the Athenians for the next five years. They set up a sanctuary to appeal to Asclepius, the god of healing on the Acropolis. When Sophocles presented his play “Oedipus Tyrannus” at the festival of Dionysos several years later, where he wrote about a plague in Thebes, the Athenians reacted in terror. It hit too close to home, too close after the real event. Are we living with the same fear as the ancients or the same feeling of the fragility and uncertainty of life and its institutions, she asks, and what wisdom have we gleaned?

…suddenly without any apparent cause…and being in perfect health, they were taken first with an extreme ache in their heads, redness and inflammation of the eyes…Thucydides, History of the Peloponnesian War

Here in Athens, as in cities, towns and villages all over the world, we’ve had to get used to the idea of quarantine. Going into “quarantine,” what a quaint concept! It’s one that we used to see in reading children’s classics where the characters had old-fashioned contagious diseases like scarlet fever or diphtheria or smallpox. But now in a kind of quarantine or “lockdown” reality, we’re connected to other pandemics or epidemics that have ravaged populations at various times in history. 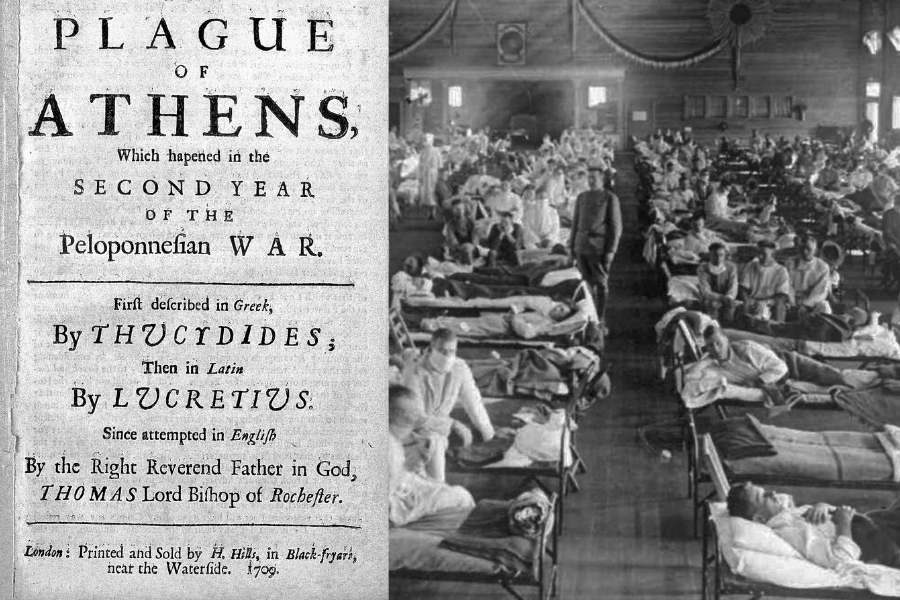 In our recent modern times, it was the 1918 Spanish flu pandemic. In the early years of the 19th century, the United States had no less than 22 deadly yellow fever outbreaks. Oran, the Algerian city where Camus sets his novel “La Peste,” was hit repeatedly with cholera epidemics over the centuries. London battled with the plague in the 1660’s. Besides the deadly bubonic plague or “black death” of the 1340’s in Europe, one of the first recorded – and deadliest – plagues in history was the one that hit Athens in 430 B.C. As many as 100,000 died, almost one third of the population.

It was the 2nd year of the Peloponnesian Wars. Things were going pretty well for the Athenians when suddenly the inhabitants began experiencing raging fevers and insatiable thirst. The disease started in Pireaus, probably brought there from an Egyptian ship. Thucydides, the historian/general, became ill but was lucky enough to survive and (lucky for us), to go on to write about it in “History of the Peloponnesian Wars,” the only written account we have. Although not a physician, Thucydides was way ahead of his time. In his account, he made some observations, first noting that where the population is most dense, there are more cases there. And indeed Athens had become very overcrowded with a severe lack of resources, perfect breeding conditions for the spread of the illness, commonly accepted today as being typhoid, but no one is really certain. Even if social distancing was known, there was no way it could be practiced. 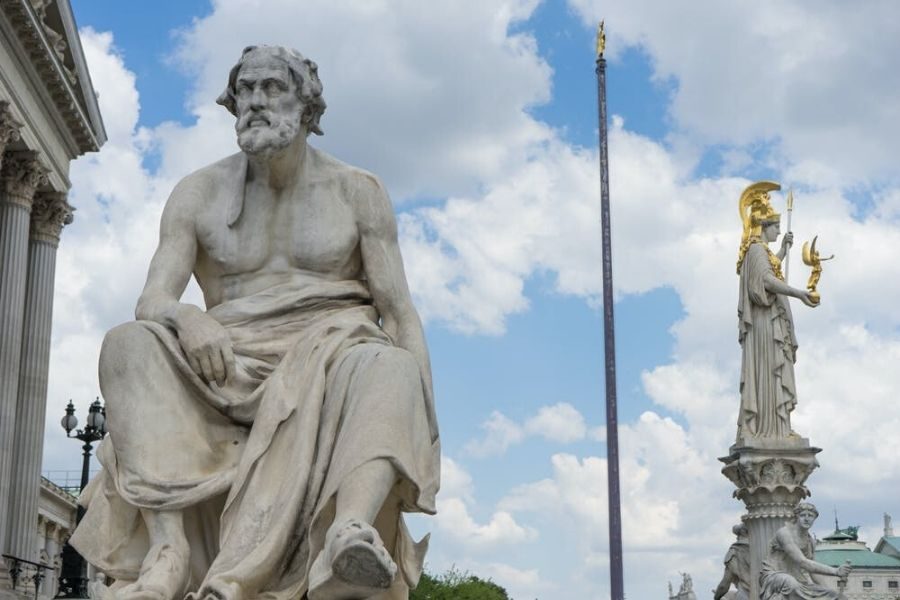 Thucydides, author of ‘History of the Peloponnesian War’

Thucydides noticed too that physicians who tended the sick were becoming ill more than others and also saw that the disease was transmitted from new soldier reinforcements to old soldiers. The idea of contagion was not part of medical thought. People believed in the theory of “miasma,” poisonous vapors in the air. Who sent these vapors?

Most likely the gods who were displeased. Medicine of course was bound up with religion. If you fell sick, you’d probably want to consult an oracle more than a doctor.

The curious thing is that Thucydides’ observations and insights – he also noted some people seemed to be immune to the disease after getting it – were mostly forgotten through the following centuries. The idea that the cause of illness was supernatural continued to be believed, as well as ignorance of how disease was spread.With so many deaths, Thucydides refers to the problem of disposing of the dead. In 1994, at the Kerameikos Museum (the ancient Athens cemetery) while workers were digging for the Athens metro, a mass grave of 150 people was found, identified as plague victims.

The plague didn’t just have physical effects, but moral too, as Thucydides tells us. In any crisis, you see the best and the worst of people and so he does too, both selfishness and selflessness. But the second won out.

Here’s where Athens fell apart and made a mockery of what the great general and orator Pericles proudly upheld in Athens’ character. 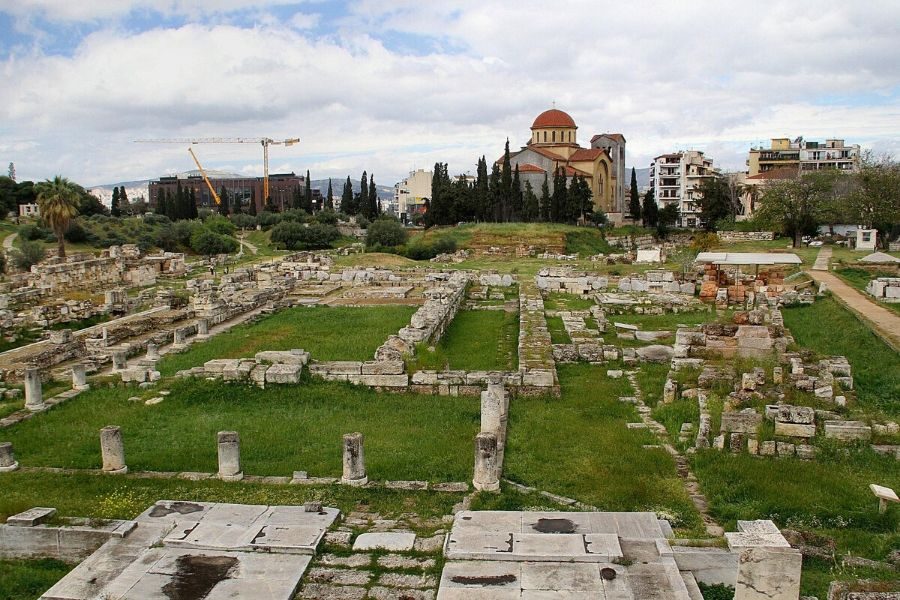 Kerameilos, the site at which remains of Athenians who died of the deadly plague were found©Flickr

Pericles (who perished in the plague along with his wife and two sons) had described Athens’ great values in his famous funeral oration, that the city had “a reverence…and a respect for the authorities and laws.”  That idea was totally turned on its head.

The idea of Goodness was abandoned as people felt it no longer mattered, that they were probably going to die anyway. Belief in the gods decreased, as both believers and nonbelievers suffered the same. There was a breakdown in law and order, a breakdown in democracy, that turned out to be fragile, and eventually loss of the war.

The plague struck terror into the Athenians for the next five years. They set up a sanctuary to appeal to Asclepius, the god of healing on the Acropolis. When Sophocles presented his play “Oedipus Tyrannus” at the festival of Dionysos several years later, where he wrote about a plague in Thebes, the Athenians reacted in terror. It hit too close to home, too close after the real event. For us, after we venture out, we’ll live with our fear that the virus will flare up again. We might know a tremendous amount scientifically about the origins of diseases and how the coronavirus “works,” with millions of articles we can read online, but it doesn’t mean we don’t have the same fear as the ancients or the same feeling of the fragility and uncertainty of life and its institutions. Epidemics and pandemics won’t disappear, but hopefully after over 2,000 years, we can humbly use some wisdom gained through the centuries.

What type of Quarantiner are you?

‘For the first time in my life, I’m glad to be living in a police state