Menu
Home | Insider Stories | Mykonos, an Island That Once Was 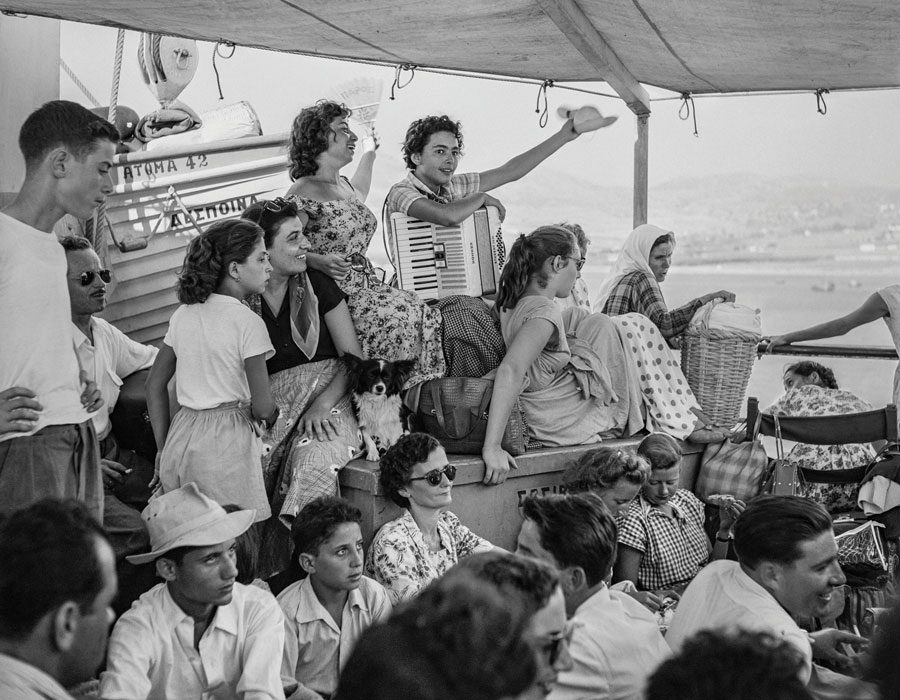 Deck Class on the Despina. The ship was a regular visitor to Mykonos and was affectionately known as "Despinaki" which means "Little Despina". It was owned by the Foustanos Family. Deck Class was fine when the wind and seas were calm, but when the winds rose it was a very different scene as passengers tried to avoid the sea spray and find a solid hand-hold.

Robert McCabe’s black and white images capture a poetic, poignant Mykonos whose charms he finds have been all but tainted with its newly minted patina as the island of party excesses and bling. This book is a precious reminder of just how much has been lost and how much is still worth saving.

My first visit to Mykonos was in the summer of 1955. From the vantage point of those days on that magical quiet island with one 12-passenger bus and a plethora of donkeys it was absolutely inconceivable what would happen over the ensuing 60 years.  On the day I arrived, there were some 15 visitors on the island. These days, on a typical summer day, the island expects between 120,000 and 140,000 visitors.

So, in 1955, here was a small exceptionally beautiful island with little electricity, no cars, motorbikes, running water, tractors, TV or internet, no airport, no dock, and essentially no tourists. But artists and writers had already identified Mykonos as a special place some decades before my first visit, for many reasons. One was the beauty of the architecture of Chora and its extraordinary setting directly on the sea. Most Choras – island main villages – are built in the hills hidden from view from the sea to avoid so pirates wouldn’t get interested. But the Mykonians – either audaciously unafraid of pirates or because they were among the pirates – built directly on the sea, some houses so close that a captain could disembark directly into his living room. There were other unique attractions too: the warmth and hospitality of its people, the beaches with unusually fine Aegean sand, the proximity to Delos and its important archaeological site, the unspoiled landscape with its spectacular rock formations, and generations of hard-won terracing created to expand and maintain agriculture. 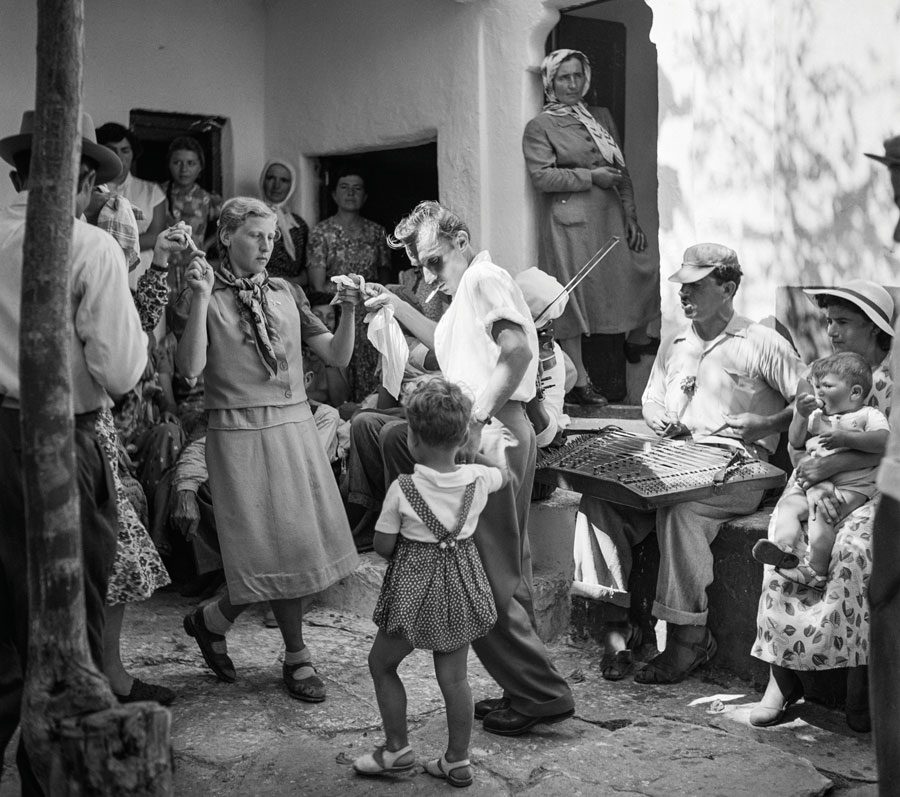 St Panteleimon Monastery. Michalis Rabias on the santouri. The young woman is Argyro Kypraiou. It appears they are dancing the kalamatianos, a popular folk dance. Panigyria, the religious festivals in Mykonos, are still among the most vibrant in the Aegean. Many of the customs and traditions of Mykonos have been preserved despite the massive tourism development

Mykonos was like an independent island principality with its own culture, its own dances, songs, poetry, cuisine, textiles, architecture, and even language. It is not an exaggeration to say that life in Mykonos has changed more in these past 60 years than it did in the prior 3000 years.

All of this had evolved and been carefully honed over a period of thousands of years, through wars, occupations, drought, and
other calamities. You cannot underestimate the isolation of these Aegean islands in the age of sail and how unique and distinctive cultures evolved there.

It is not an exaggeration to say that life in Mykonos has changed more in these past 60 years than it did in the prior 3000 years. It was an undisturbed example of a very carefully polished, self-sufficient Aegean civilization. How incredibly lucky I was to see it in those days when it was still just on the threshold of such dramatic change.

A few hours after I arrived I wrote a letter to my parents in New York and dispatched it at the post office. I told them I had found the most beautiful place on earth and even if they came directly from the United States and saw nothing else, it would be worthwhile to come and see just Mykonos. I know this must sound made-up today but it is true. If you don’t believe me I will try to find the letter.

This year Mykonos is expecting two million visitors. One senses there’s been a huge explosion – an explosion of houses, cars, tour buses, motorbikes, villas, roads, and people from all over the universe. That incredible magnificent little village by the sea has become a huge shopping center with virtually every retailer you can name present. But where is the bakery, where are the blacksmiths, where are the caiques and the donkeys? Outside of Chora, the landscape is dense with villas. This is progress of its own sort, and the economist in us applauds the enormous economic success of the island, the envy of its Aegean neighbours. 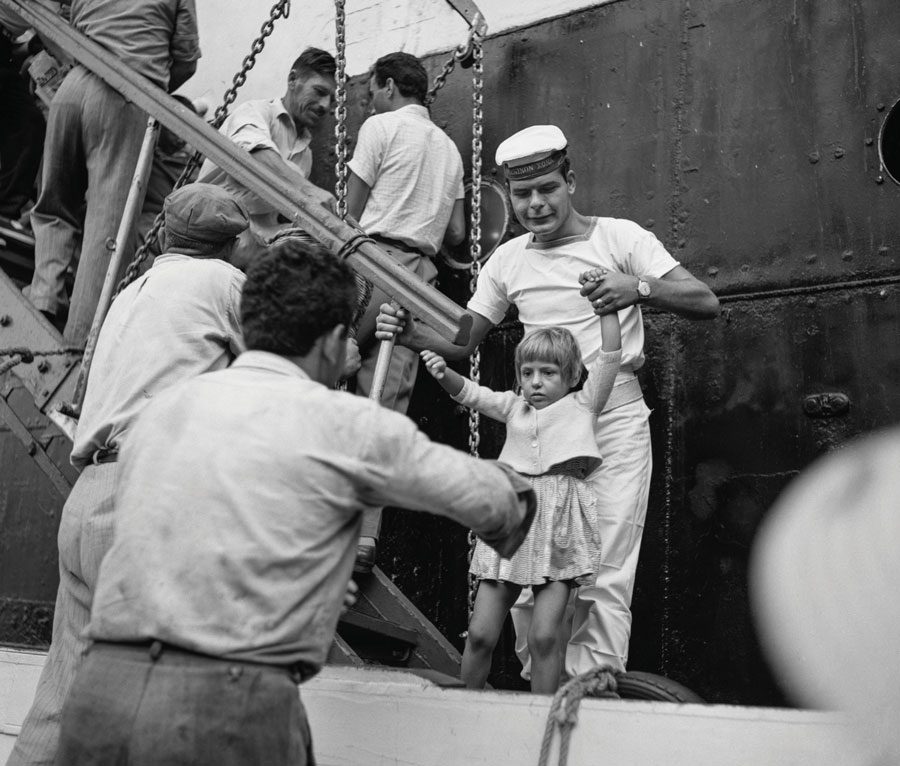 The sailor steadies himself with one hand as a slightly apprehensive young girl reaches to the man in the tender. In rough seas these hand offs were an adventure for all parties.

In the period after the war people started to move out of the Aegean islands, seeking work on the mainland or abroad. Houses
were sometimes abandoned when families emigrated. Development and tourism have saved some island villages, and they have given employment to the local population and kept them in place. That has been good. Mykonos has been saved beyond imagination…and also beyond recognition.

In 1955, Chora had evolved for the pleasure, economic viability, convenience and edification of its inhabitants, not to lure tourists. The streets were narrow and complex for protection. The churches were the objects of faith, of hope, of salvation at sea. It was an authentic and admirable civilization, perfect in its way to serve its residents.

In the 1950s you took only real ships to Mykonos, often very old ships. The sea-going high-speed buses of today did not exist. You could smell the sea and feel it. You transitioned to shore by leaping into a bobbing tender and gripping a gunwale for dear life as the meltemi’s wild sea spray hit your face. Who could have guessed that docks would replace tenders and then ferry ports would replace docks; airports would be built and a huge cruise ship harbor would be constructed. The island would become a super prime tourist destination for the world. 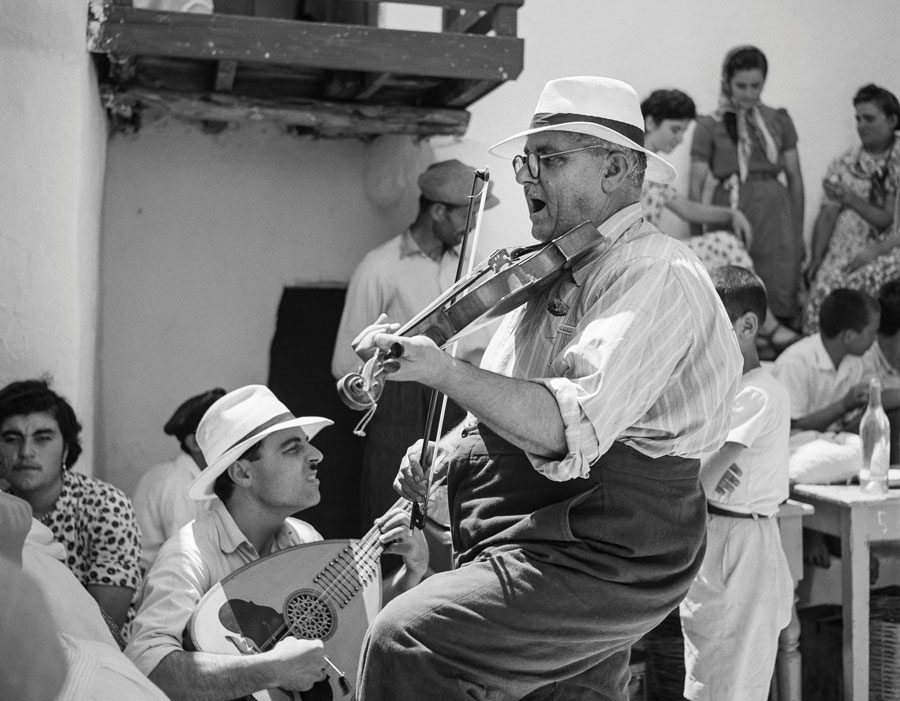 Saint Panteleimon Monastery. Konstantinos Rabias plays the violin while his son Nikolakis strums the laouto. a string instrument of the lute family found in Greece and Cyprus.

When I look at my photographs today I feel like an archaeologist might feel when uncovering some carefully wrought object from the past that illuminates the history, mores, life and ethos of a long ago era. The photos feel to me like precious relics. They were the years just before tourism changed the face of the island forever. 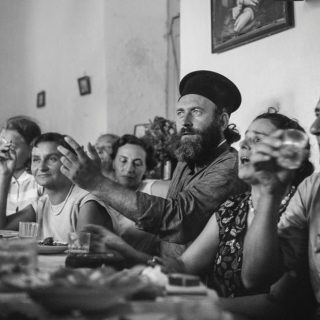 Saint Panteleimon Monastery. The priest is Vasilis Athimaritis the lady with the cigarette is Elli Polimeropoulou, the godmother, and the lady between her and the priest is Katie Koumarianou. On the priest’ right in the camera view is Aikaterini Georgouli. The boy baptized is shown in part on the right, George Tsitas 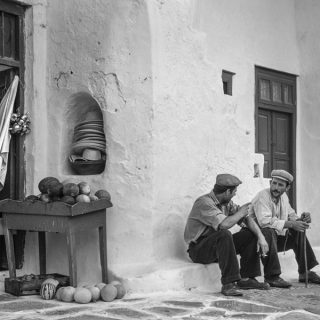 The pantopoleion, or general goods store of Dimitras Daktylidis. The fruit is from Mykonos. On the left is Nicholas Nazos and on the right, Anastasis Xidakis 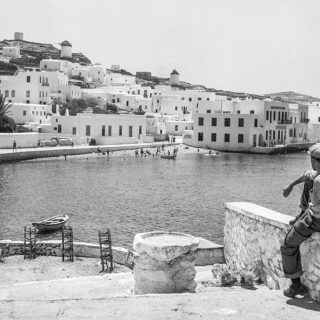 1955. A view from Kamnaki toward St Anna’s beach, with the small chapel of St Anna visible behind the beach. On the right, the hostorical Hotel Delos owned by the Fiorentinos family. Just behind the camera is the Archaelogical Museum. Today the area is called Remezzo, after the renowned bar.

History is repeating itself. Delos had  been a great and renowned international commercial center in antiquity. Mykonos has today taken up the mantle of its tiny ancient neighbor. The island has reinvented itself as a happy, fashionable place for people to shop, vacation, party, dine, relax by the sea (in €100 lounge beds with an umbrella). They shop surrounded by some of the most beautiful architecture in the world. Yet we know in our hearts that something has been lost.

The wonderful thing about photography is that it provides a true historic document of a scene or activity and at the same time offers the photographer an opportunity to present some interesting or artistic elements in a surprising or fresh way. I thought I would be returning for the rest of my life to photograph from new angles this undisturbed place. I was wrong and unfortunately I didn’t bring enough film those early years to really do my job properly, given the impending change. I am especially disappointed that I did not photograph more of the architecture and landscape of the island before retail signage and villa construction changed their character.

It is sad that this year’s two million visitors cannot have the experience of Mykonos in 1955, the experience of an ancient authentic Aegean civilization. Fortunately we have Chora with its architecture fundamentally intact. This is a treasure of incalculable value. If these photos can help a visitor or a grandchild of the island relive or imagine some small aspect of the island’s earlier life I will be happy. 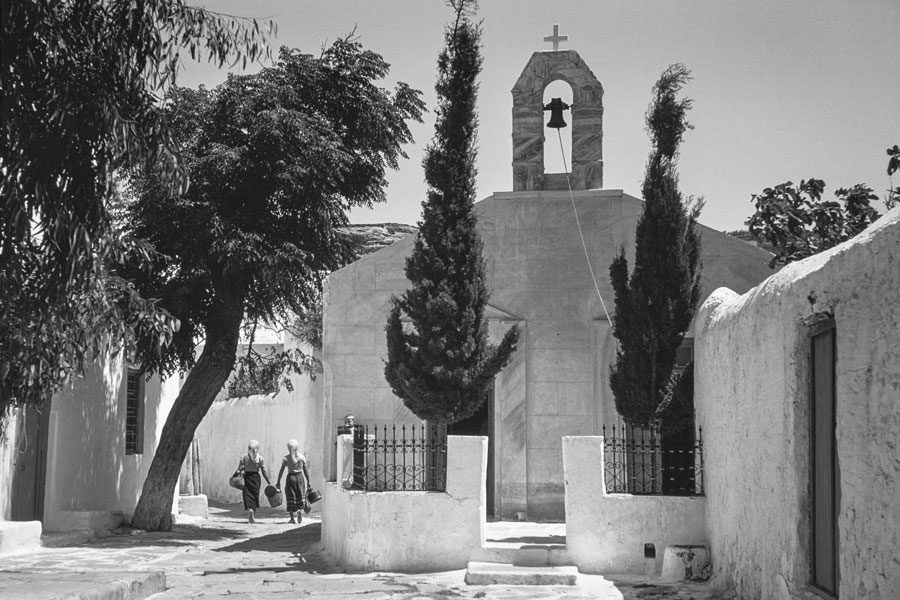 The twin churches of St Barbara and St Fanourios. On the left, behind the tree (now gone) are the chapels of St George and the Three Wells. Legend has it that if a girl offered a man water from the middle well he would ask her to marry him. The dress of the young women points to their coming from the countryside, perhaps with farm produce for the market.

When I look at my photographs today I feel like an archaeologist might feel when uncovering some carefully wrought object from the past that illuminates the history, mores, life and ethos of a long ago era. The photos feel to me like precious relics. They were the years just before tourism changed the face of the island forever. 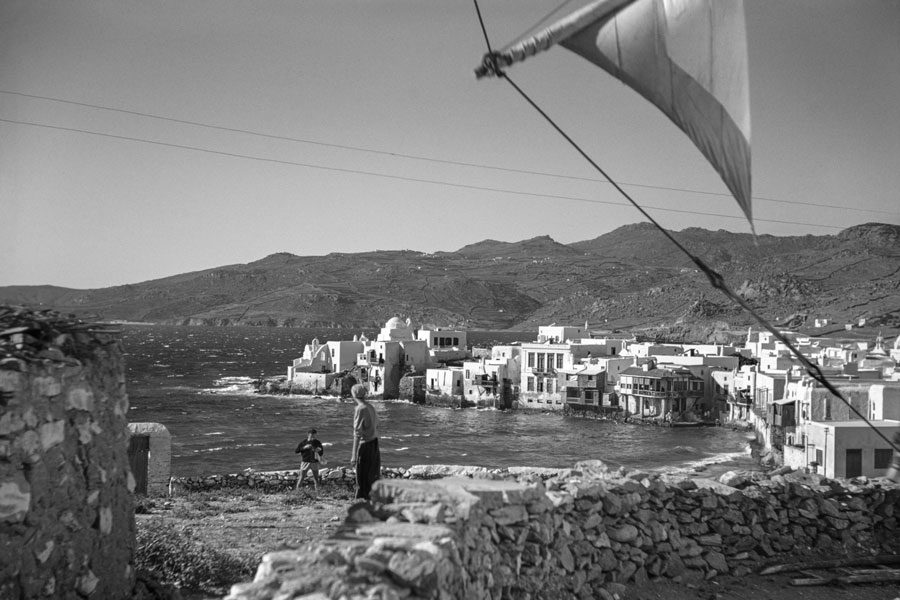 A French couple pause to take a photograph in front of the mill of Yeronymo on a windy day. Little Venice is spread out below

Robert McCabe grew up in Rye, New York and started taking photographs when he was five. His earliest quest was for
newsworthy photographs and he gathered images of hurricanes, drownings, and auto and train accidents. His first photographs of Europe were the result of a trip in 1954 to France, Italy, and Greece. He returned to Greece in 1955, and in 1957 he photographed in the Cyclades for National Geographic Magazine. Currently he is working on several projects including books: “Portraits of the Greeks 1954-2017”; “The Greeks and Their Seas”; Kassos 1965 with Marilen Kedros, and “Santorini: Portrait of a Vanished Era” with Margarita Pournara.

Mykonos: Portrait of a Vanished Era, Published by Patakis Publications.

The Forgotten History of the 122nd Infantry Battalion