The Forgotten History of the 122nd Infantry Battalion 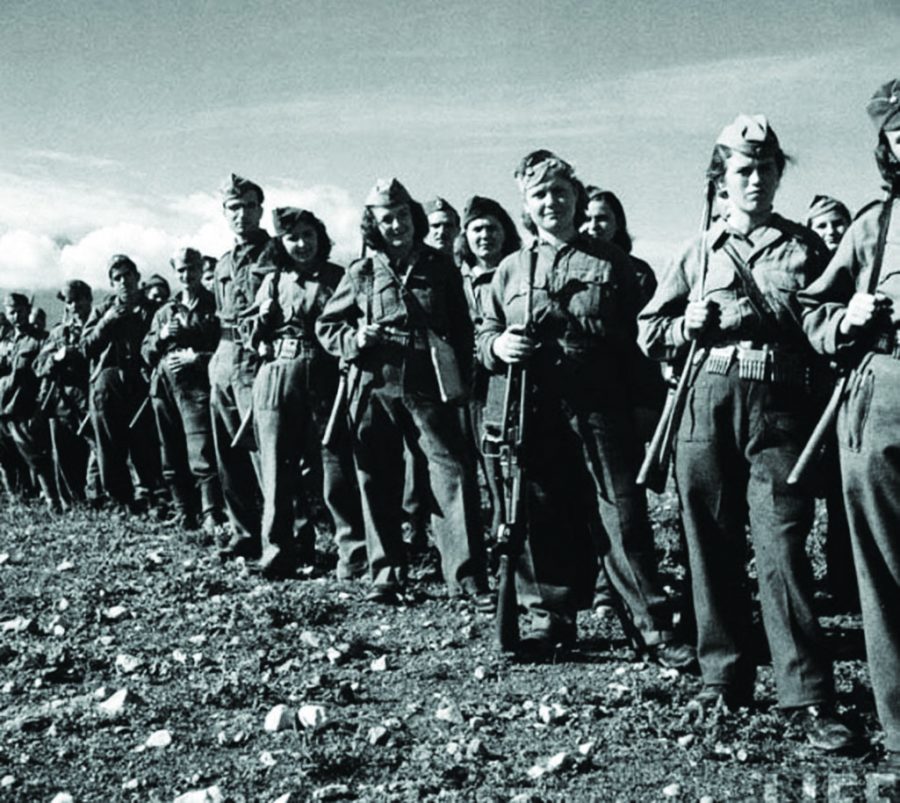 Cdr. Demetries Grimes, a former US naval officer, aviator and diplomat recounts the exploits of the elite 122nd Infantry Battalion, established by President Franklin Roosevelt at the request of the Greek government in exile, to recruit Greek-Americans to support resistance efforts in German-occupied Greece

Like Cadmus’ Spartoi, sown men, grown from the slayed dragon’s teeth he planted in the ground in Thebes, in WWII German-occupied Greece, the dragon’s teeth would be sown once again…

Much of what has been written about the Office of Strategic Services (OSS), the predecessor of the Central Intelligence Agency (CIA), revolves around tales of clandestine activities and espionage. Overlooked by most historians are the fascinating and heroic exploits of the OSS Operational Groups (OG), kept Top Secret for more than forty years after the war. During World War II, OGs were small, highly trained military units tasked with intelligence gathering, organizing, training, supplying, and working with local resistance fighters against Axis forces behind enemy lines. The OGs in the Mediterranean were organized under the command of the 2671st Special Reconnaissance Battalion. The most effective and highly decorated of these groups was formed from the 122nd Infantry Battalion at Fort Carson, Colorado. The 122nd Infantry Battalion was established by President Franklin Roosevelt, at the request of the Greek government in exile, to recruit Greek-Americans to support resistance efforts in German-occupied Greece. The founder of the OSS and the OGs was millionaire Wall Street Lawyer and World War I Medal of Honor winner, Col. William ‘Wild Bill’ Donovan. In 1940, before the US entry into the War, Col. Donovan was tasked by President Roosevelt and the US Secretary of the Navy with a special mission to gather intelligence in Britain, Europe, and the Southern Mediterranean on Axis operations and Allied capabilities to counter the German war machine. After two extended trips to the region, he concluded that neither the US nor Britain were capable of defeating the Axis powers with conventional military forces alone. According to his assessment, highly skilled forces engaging in coordinated guerrilla warfare would be required to win the war. He believed the rich ethnic makeup of America could provide second generation American soldiers with special capabilities to support local resistance organizations. He envisioned creating an elite force of highly skilled warriors and inserting them as small teams behind enemy lines to gather intelligence, commit acts of sabotage, engage in counterespionage, train local resistance fighters, and coordinate combined guerrilla resistance operations. 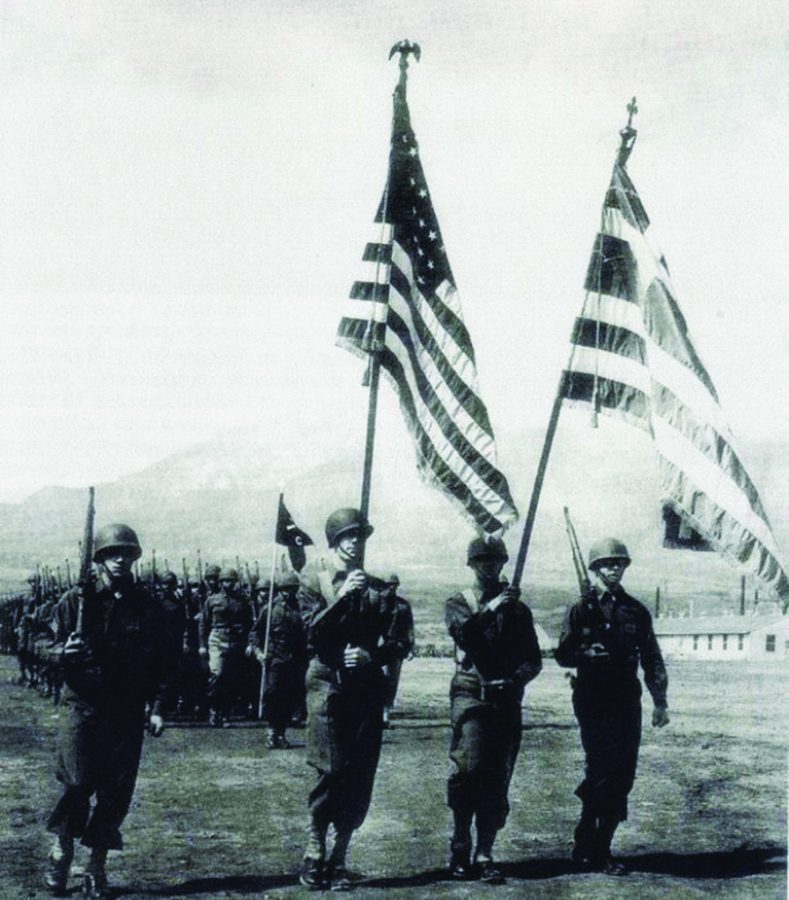 The Greek-American Battalion at their Fort Carson, Colorado training base carrying the US and Greek flags. Official US Army photo

A force of 12 officers and 120 NCOs qualified for the Greek-American Battalion. The units were inserted by sea and by parachute under cover of darkness in early 1944 and dispersed throughout Greece to work with British military officers and the Andartes of the EAM-ELAS to inflict damage on the enemy and destroy communications rail networks, and bridges used by the Wehrmacht.

Convinced by Col. Donovan’s assessment, President Roosevelt appointed him to lead the OSS and begin the recruiting and training of agents and units needed to “sow the dragon’s teeth” in Europe. The men recruited for these special units were physically fit, intelligent, motivated, trusted, and resourceful soldiers with language skills and cultural knowledge. Skills that would enable them to operate independently behind enemy lines. The source of inspiration for their training syllabus were the British Secret Intelligence Service (MI6), British Special Air Service (SAS), and Special Operations Executive (SOE). The Greek Battalion was comprised primarily of Greek-Americans, but also included Greek merchant mariners who joined the US Army from Greek ships stuck in US ports. They were volunteers and made aware of the inherent risk of serving in the commando units. Fewer than ten percent were expected to survive their tour of duty. Aware of the threat these special units would pose, Adolf Hitler issued an order on Oct 18, 1942, Fuhrer Edict No. 003830/42g, which stated: “From now on all enemies on so called Commando Missions in Europe or Africa, challenged by German troops, even if they are to all appearances soldiers in uniform or demolition troops, whether armed or unarmed, in battle or in flight, are to be slaughtered to the last man.” It was also rumored that Hitler offered a capture reward for Commandos equivalent to their weight in gold.

A force of 12 officers and 120 non-commissioned officers qualified for the Greek-American Battalion. In advance of the OG deployments, OG officers parachuted into Greece to establish relations with the British Military Mission and Andartes groups in their mountain hideaways. The men were formed into eight Operational Groups. The units were inserted by sea and by parachute under cover of darkness in early 1944 and dispersed throughout Greece to work with British military officers and the Andartes of the EAM-ELAS (National Liberation Front-National Liberation Army). Their mission was to inflict the heaviest damage possible on the enemy and destroy communications, rail networks, and bridges used by the Wehrmacht for redeployments and withdrawal of the 150,000 German and Axis occupation forces and their equipment. They also conducted sabotage operations, with intelligence provided by the US Naval Attaché in Ankara, against the transfer of strategic materials moving from Turkey to Germany via Greece With thousands of documents related to their exploits yet to be declassified by the US government, expect to hear more about these brave warriors who went into harm’s way, willing to make the ultimate sacrifice for both the United States and Hellas. 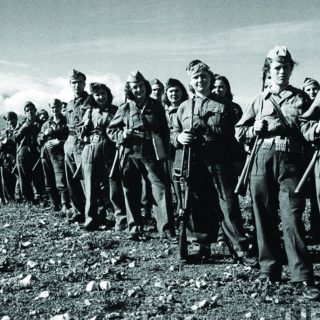 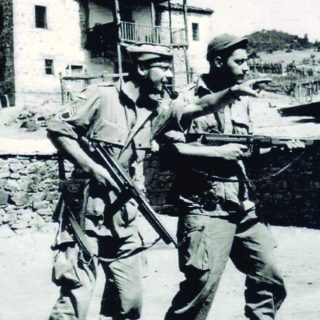 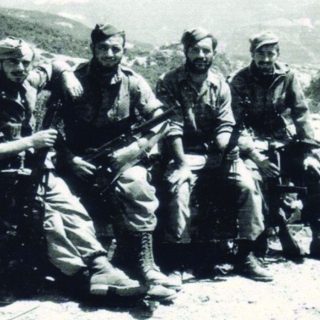 With thousands of documents related to their exploits yet to be declassified by the US government, expect to hear more about these brave warriors who went into harm’s way, willing to make the ultimate sacrifice for both the United States and Hellas.

Considering the overwhelming odds and challenges they faced, the Greek Battalion suffered only three combat fatalities and 23 wounded in action. Despite Hitler’s order and capture reward, not a single member of the Greek Battalion was betrayed or captured. The eight groups conducted 76 operations in Greece accounting for more than 2000 enemy killed, wounded, or captured, destroyed 15 bridges, 11 locomotives, 32 train cars, 63 military vehicles, 6 garrisons, and more than 9000 meters of rail. Their successful actions earned them a US Army record number of individual Bronze Star Medals and the prestigious Presidential Unit Citation. On 26 May 2005, they were recognized with the unveiling of a statue in their honour by then Greek Defense Minister, Spilios Spiliotopoulos, at the Armed Forces Park in Athens. In his address to the US and Greek officials, veterans, widows, and family members of the Greek Battalion gathered, Minister Spiliotopoulous stated: “the actions of the Greek American volunteers express in general their contribution in all our nation’s struggles and exemplifies the attachment to modern Greece with the ancient values and ideals of our Hellenism.”

In March of 2018, OSS and OG veterans were honoured once more, at the Capitol in Washington, DC, in a ceremony awarding them the Congressional Gold Medal. With thousands of documents related to their exploits yet to be declassified by the US government, expect to hear more about these brave warriors who went into harm’s way, willing to make the ultimate sacrifice for both the United States and Hellas.

Some great books about the OSS and the Operational Groups are Donovan’s Devils, OSS Commandos Behind Enemy Lines-Europe, WWII by Albert Lulushi, Behind the Lines in Greece: The Story of OSS Operational Group II by Robert E. Perdue, Jr., and Classical Spies: American Archaeologists with the OSS in WWII Greece by Susan Heuck Allen. 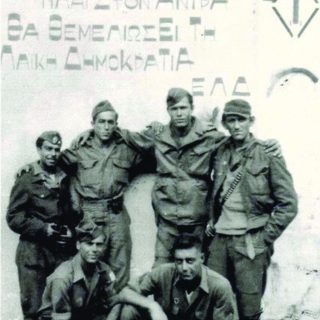 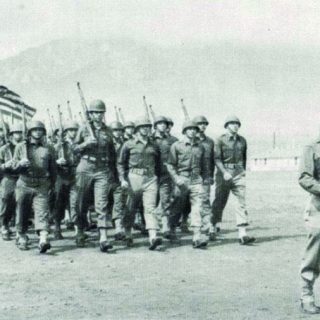 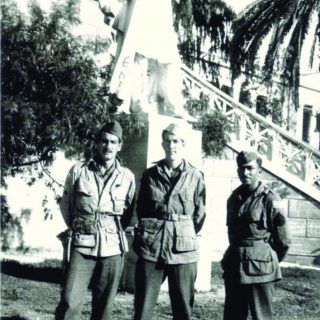 OSS Forces in front of The National Library in Athens. J. Giannaris Collection