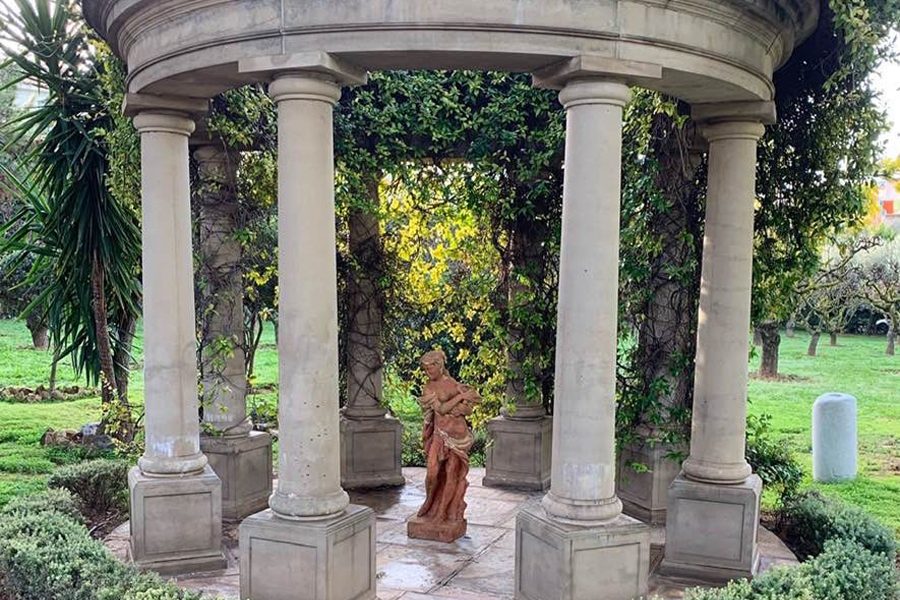 Athens Insider runs a series of excerpts from Yannis Zervos’ ‘Passage to Paradise – Hellenic Sketches of the Mind’ throughout the year. The book traces the author’s eventful, chequered life, criss-crossing places and people in a racy, engaging style, and offers perceptive insights into Greek society. In this second excerpt, Zervos reminisces on Paradisos, his childhood home where he still lives, a house that inspired the title of his book.

After my father passes away, I am left to deal with numerous legal entanglements, companies, tax bills, a tennis club, government expropriations and other responsibilities that will require money and time to sort out.Within six months, I close down his import business, sell the tennis club in Maroussi, and pay all the outstanding tax bills that, in his declining years, had refused to pay. I sell off various properties in Piraeus and Keratsini and abandon others in Salamis due to complicated ownership issues. All time-consuming but necessary moves.

I get little help from my brother and sister, who are absent anyway, or from my mother who just wants to paint and refuses to get involved. She lives alone in the old house, helped by Antonis the alcoholic gardener and an incompetent maid called Maria. The house and gardens have suffered horribly. No one has picked the olives, grapes or pistachios in years. The lawns are destroyed, the trees and bushes all overgrown. Everything, from the plumbing and heating to the electrical wiring, has collapsed. 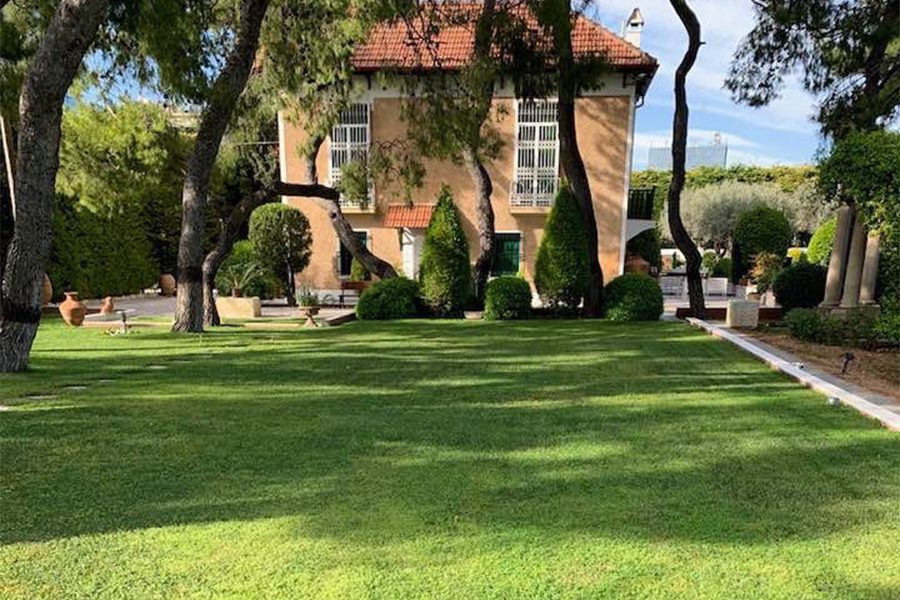 The soap factory is in ruins. My mother does not care; all she wants to do is paint. During the periods when she travels to England to visit her brother, I rush in to attend to the basics.

All this changes after her death in August 1994.

One of my first moves was to restore the old abandoned soap factory and turn it into an industrial museum and event venue.

There were five large buildings in a state of disrepair. The chemistry lab, the huge drying  rooms, the factory itself with a massive vat, and industrial mixing equipment. There were tools including bronze molds, cutting tools, wooden mallets, presses, weighing machines, and countless objects, especially in the lab, that reflected the process of making soap. After fixing the roofs, the electricity, the toilets, we concentrated on cataloging and restoring all the objects, creating display cases and special rooms with enhanced lighting.

It took about two years before it was opened to the public. It looked beautiful and captured the spirit of an old factory. Not an easy task.

We held numerous events, dinners and exhibits, using the surrounding gardens. To raise funds,  we leased the space for price events, including a unique fashion show. 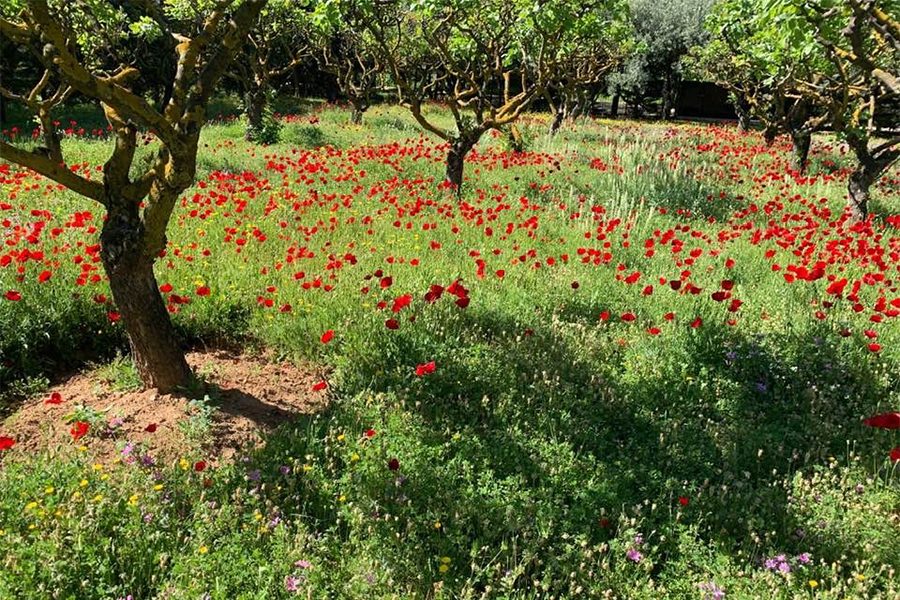 The Greek state, department of school buildings, decided to expropriate the factory, the surrounding gardens and trees to build a public school. We contested the expropriation and finally the Supreme Court cancelled the action on a technicality. Great victory. Unfortunately, they returned with a second appropriation, despite the entire property, including the house, having been declared a protected zone by the First Ephor of Newer Monuments, they succeeded with the appropriation, destroying the museum, cutting down 500 trees, and building a 3-story monstrosity. I was devastated.

At least I had the house and the remaining  garden. I plant four hundred Leylands, Cypress trees, three-hundred Goldcrest evergreens and palm trees. Huge Aleppo pine trees surrounded the garden, flanked by lavender, oleander bushes, roses and seasonal flowers. The existing pines, olive trees and pistachio trees are clipped; stone pathways are laid around the house; and a 2,500 square-meter lawn area is created. Fortunately, I drill for water and find a lake at 135 meters below, from which we are able to pump 35 cubic meters of water per hour. I then install a computerized watering system that self-adjusts according to the weather.

I  started picking the olives again, resulting in a small harvest of about 300 kilos of oil per year. Other fruit trees include pomegranates, lemons, pistachios and tangerines. We have lost the vineyards and most of the fruit trees when the government expropriated large sections of the garden to build an orphanage and other government buildings. Eventually they also expropriated the old soap factory and about 5,000 square meters of land to build a public school, destroying about five hundred pistachio trees in the process. I fight against the expropriation for years, but finally the state succeeds in its bid to build a school. It is a psychological blow, especially since I have turned the factory into a museum and exhibit space. 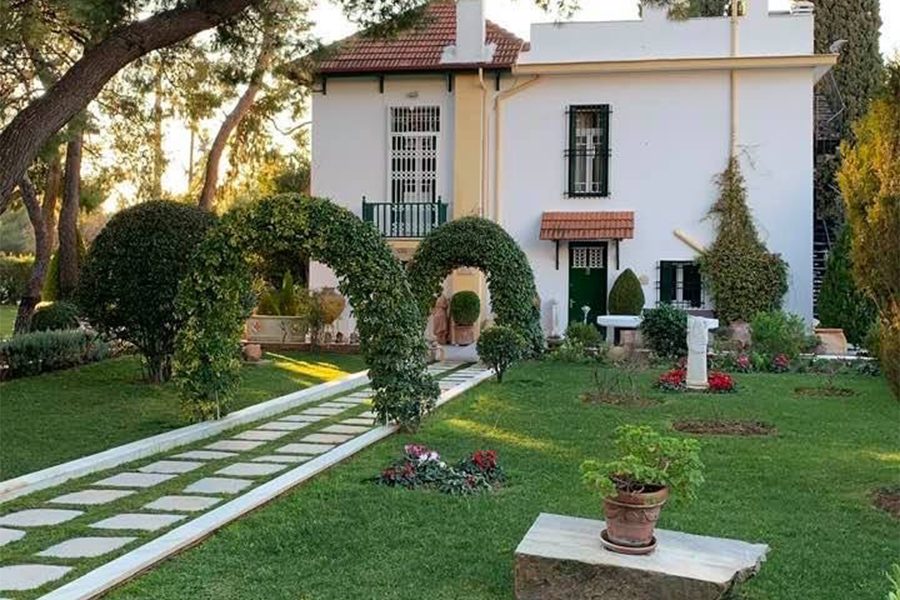 Today, the trees have matured, the lawns look pristine and the house is a shining example of 19th century architecture, inside and out. My gardener, Vassilis, works full-time to keep it clipped, swept and tended with the highest level of expertise. Sitting in the garden, with the soft lighting illuminating the trees, is my greatest pleasure. Some evenings I have a musical group play in the stone pergola, but I mostly listen to the birds twittering with joy, watch the tortoises, the evening hedgehogs, the night owls, and listen to the soft wind whispering its secrets. As an architectural whole, it resembles a score of frozen music.

Over the last seventeen years, a new Olympic stadium has been built across the street, as well as shopping malls, hospitals, office buildings, banks and hotels. The lush green gardens, and the neo-classical house surrounded by tall protective trees form a haven for the birds, a source of oxygen and a visual joy in an otherwise concrete landscape. I am happy to give tours to various gardening groups and am slowly learning the Latin names of  the aromatic plants, the  seasonal flowers, bushes and trees. They are all interconnected with an underground internet of roots that provide nourishment and protection to each other. The humble mushroom controls this valuable network, unseen and unacknowledged.

I still feel ignorant about gardens and nature’s ways but have increased my awareness and awe of this magical world that contributes to our physical and inner well-being.