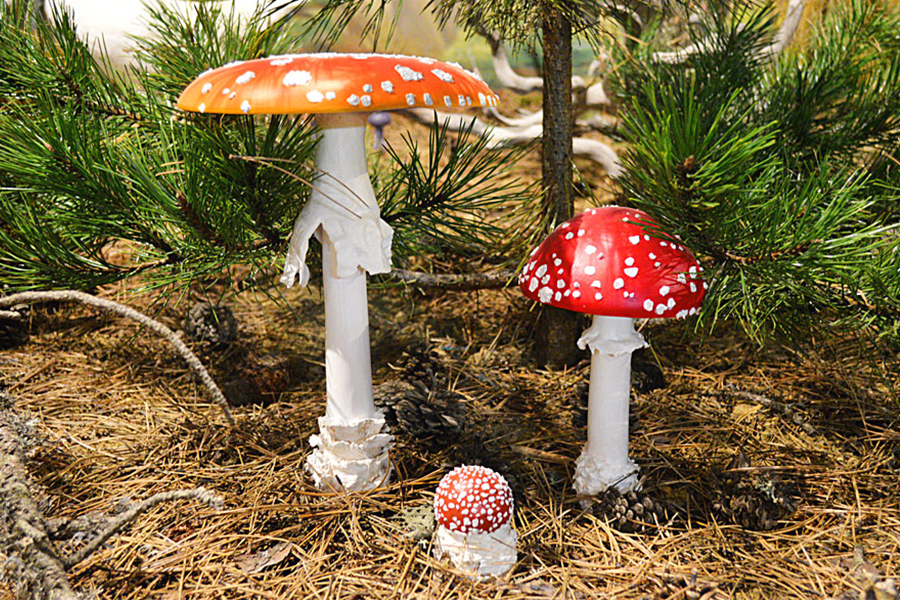 Prefer to stay in the dark? With mushroom season in full swing, why not occupy yourself with some of the tastiest nature therapy around on a becalming wild mushroom safari in Greece’s spectacular woodlands and evergreen forests or a world-famous national park. 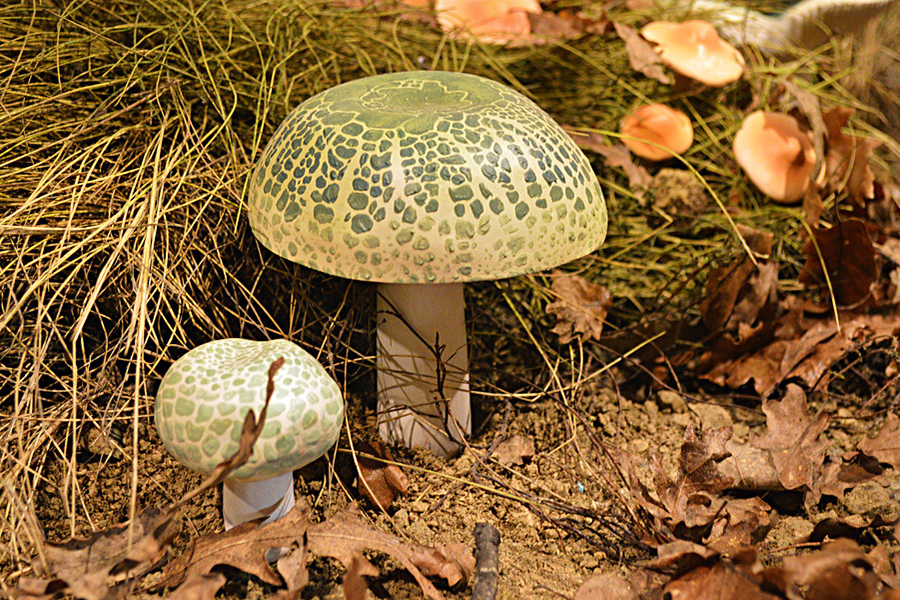 Out of 2,200 species of mushrooms in Greece, only 150 are edible and of extremely good quality due to their clean high biological value which means they’re rich in protein, minerals and trace elements but are also very tasty and delicious!

Across the country, there are clubs, restaurants, Inns, museums and farms that arrange guided tours into forests to teach you about the local mushrooms and their specialty, and feed you!

Places to enjoy, things to do!

Book your next autumn trip to the Greek mountainous mainland with one of the restaurants, Inns, Museums or farms which arrange mushroom hunting outings and explore Greek nature during the mild seasons of the year. 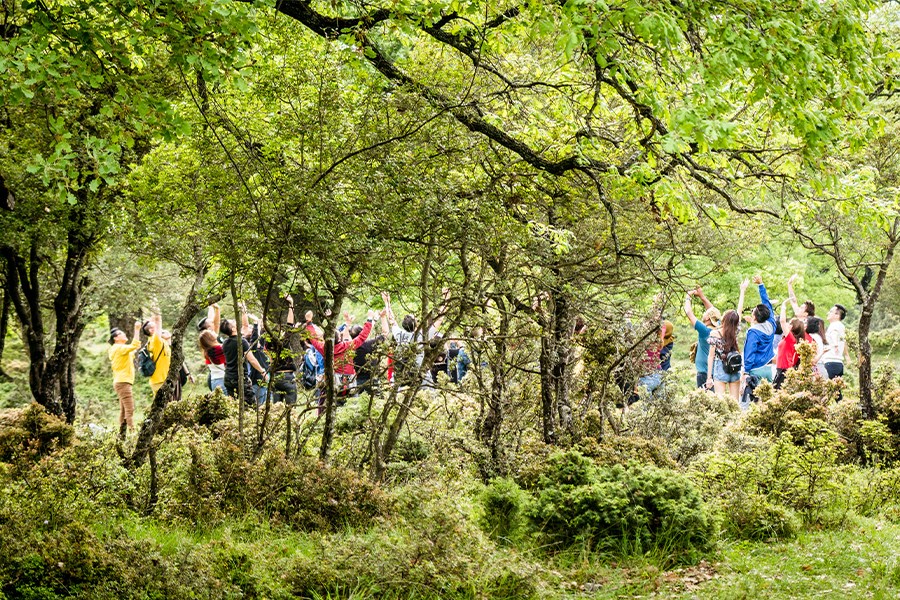 The area of Meteora is also an ideal place for the enchantment of wild truffle hunting that can be sourced nearly everywhere in the region! This charming area is the official truffle hunting area of Greece and visitors have the opportunity to experience something more than just a little bit special after visiting the majestic Monasteries. A beautiful meal is offered at the conclusion, such as a truffle pasta dish and is quite simply unforgettable! This hunting tour is complemented with a visit to the Mushroom Museums, one of the few in the world and mushroom product tasting. 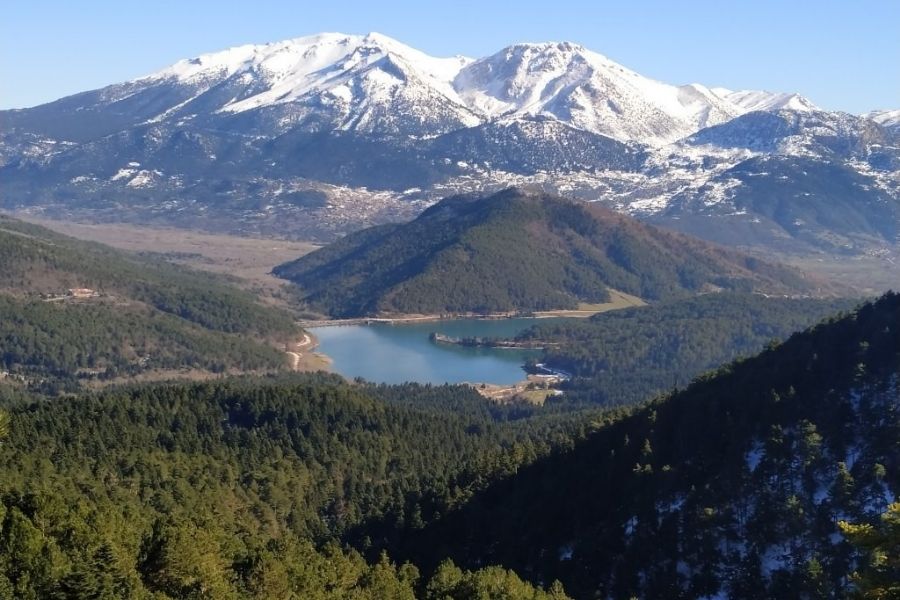 The Backpack on Greece group are soon to escape for mushroom hunting on a walk around Lake Doksa in Korinth on Sunday, 22 November 2020. If this sounds like the perfect way to spend a ‘lockdown’ Sunday as it does to us, you may be able to join two mushroom hunting specialists, out to the foothills of Mt Ntourntouvana, embarking on a refreshing and  rejuvenating easy-level hike around the lake where trekkers can lose themselves in the ‘world of mushrooms’. Also, you will be taught to recognize the ones to collect and finally cook them out in the open by helping to make a delicious mushroom soup! The excursion concludes by dining at a local tavern in the local area.
You can find out more at: backpackongreece.com,  info@backpackongreece.com 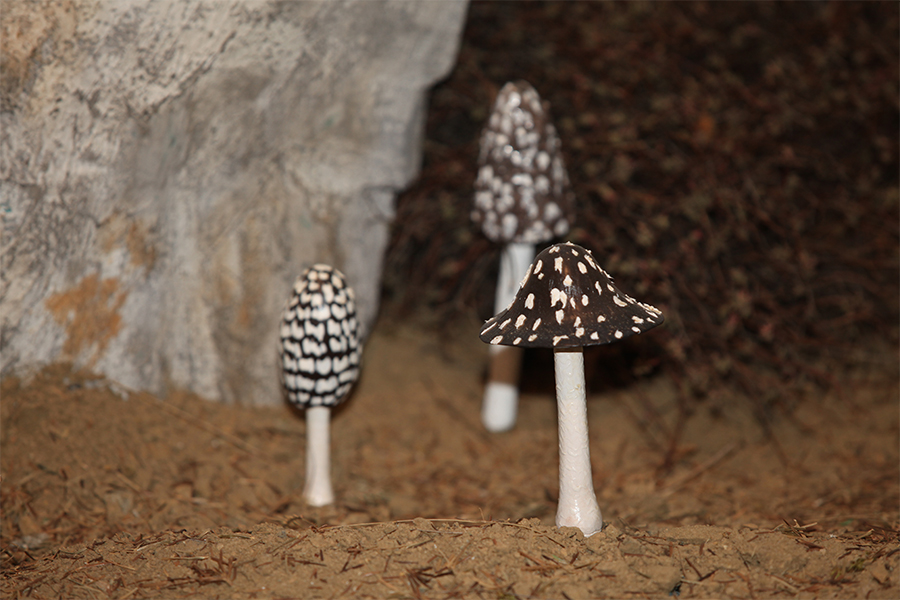 The Mushroom Museum is a charming and educational hub of all that is a fungus! It has a rich collection including uncanny mushroom sculptures where they are presented in three stages of development based on the ecosystem that each species grows (beech, pine, fir, oak, meadow, etc.) so that visitors form a complete picture of their circle of life. Coming out of the exhibition area, visitors can see exquisite frescoes, made by local painters and sculptors, linking myths and traditions of our people with mushrooms.

There is also a specially designed area, where visitors can learn about the nutritional and therapeutic value of mushrooms in a type of augmented reality display.
You can find out more at: 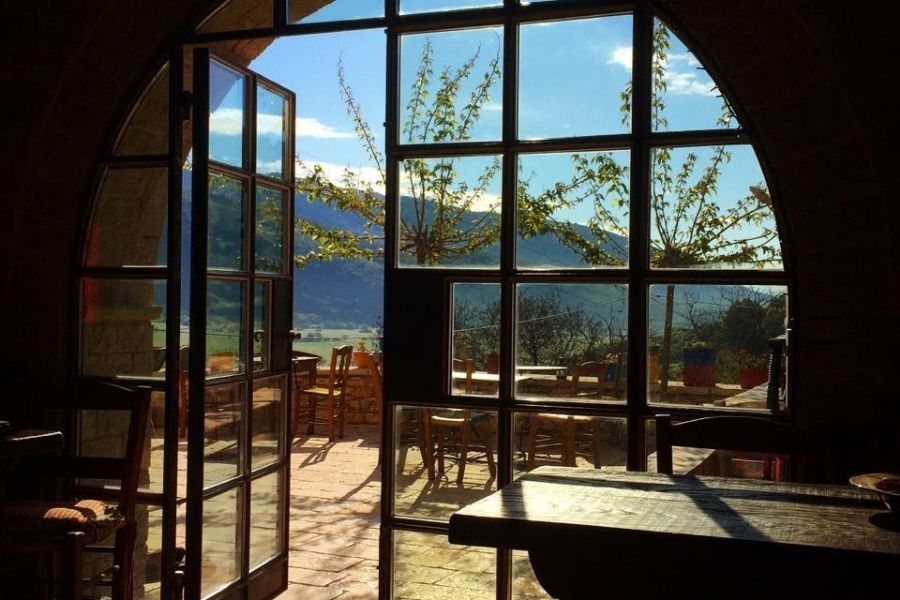 The Anemi Country Cottage Inn, which is situated in a quaint village in Zagori, heavily features the delicacies of the local wild mushrooms in the cuisine and hospitality. You will be taught anything from collecting and drying wild mushrooms to storing and cooking them as well as how to cook a few favourite dishes like wild mushroom pies, tzatziki with Caesar’s mushroom and pasta with assorted wild mushrooms to name a few.
You can find out more at:  Anemi CountryCottage Inn,  Kato Pedina, Zagori, N. Ioanninon, anemi-zagori.gr Tel: +30.265.307.2003 | +30.694.153.3944 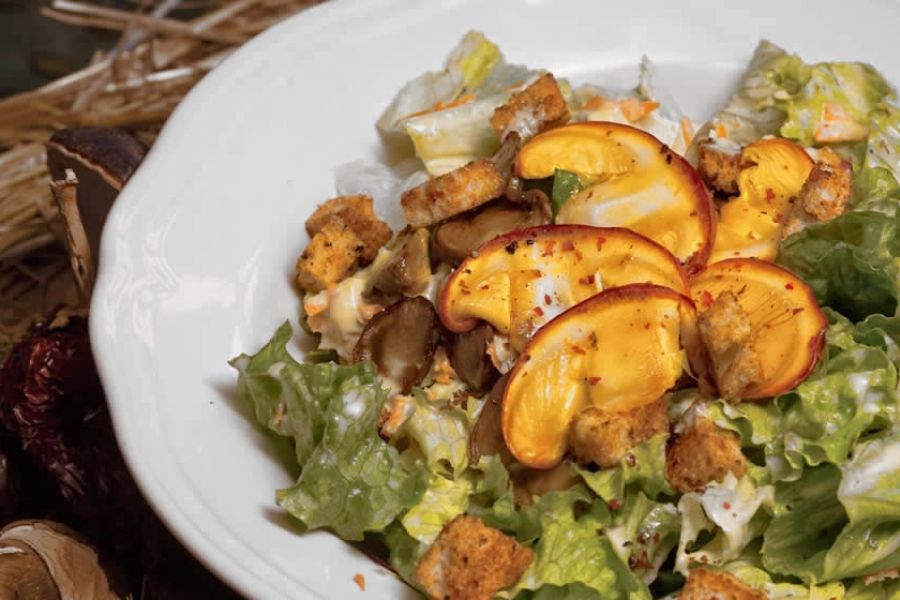 The Kanela & Garyfallo is a slice of gastronomic heaven and a unique thematic restaurant devoted to mushrooms in the Vikos gorge. You can taste dishes made from at least 20 different types of local and homegrown mushrooms while enjoying being nestled on a rocky perch in the village of Vitsa of Zagori and near to many of the region’s natural wonders including a 30-minute drive to the city of Ioannina.

Attending the Mushroom Festival in Kalambaka 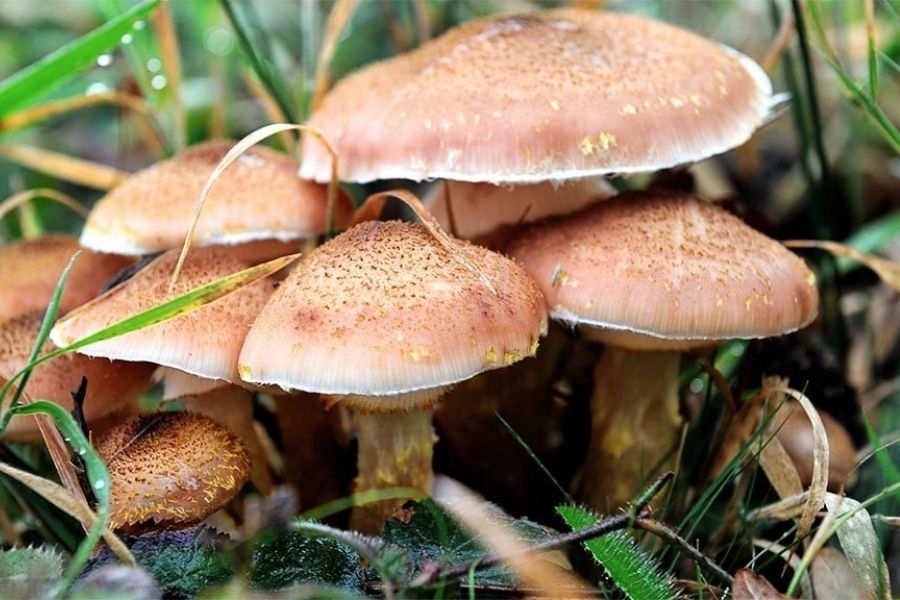 The Natural History Museum of Meteora and the Mushroom Museum organizes a Mushroom Festival every year in Kalambaka, in Thessaly. This festival aims to highlight and promote the nutritional and medicinal value of mushrooms and their health benefits, as well as the discovery of new and delicious tasting experiences by the discovery of the multitude edible wild mushrooms that exist in Greece!  In addition, there have also been mycology seminars, mushroom collection and identification treks, truffle hunting, as well as concerts and cultural events (such as an exhibition of mushroom art, theater production and an evening featuring traditional local dances) including activities for children and more. One highlight of the festival is the large assembly of 10 to 15 chefs offering thousands of mushroom dishes, prepared in various ways, to visitors from around Greece and in most other years, the world. The flavors can range from truffle and mushroom pasta to mushroom souvlaki, mushroom schnitzel and mushroom risotto to name a few! It is a big event that has been awarded the Tourism Awards 2019 and is FREE.

The first time the festival was on it welcomed nearly 5,000 visitors and served 8,000 free mushroom dishes with the Kalambaka and nearby Trikala hotels reaching near 100 per cent capacity!

The Mushroom Museum  celebrated eight new types of mushrooms previously unknown anywhere else in the world, including new species of the Gautieria and the truffle Barssia (Helvellaceae) analysed as having various aromatic elements, such as those found in cloves, cinnamon, mint, even African ginger!

The most amazing Autumn Mushrooms!

The Morel mushroom is considered to be one of the most delicious and expensive mushrooms, second only to truffles. Having a conical or ovate cap and a network of ridges with pits between them, Mushroom connoisseurs think very highly of its liver or foie gras flavour and enjoy its heavenly fleshy taste in soups, sauces, charcuterie, meat and fish dishes. Morchella, the true
morels, can be found at the foot of fir trees in the mountain ranges of Mitsikeli.

Orange or yellow, wavy, trumpet or inverted funnel-shaped, this mushroom will flirt with your taste buds with its dainty flavour. On the lower surface, underneath the smooth cap, it has gill-like ridges that run almost all the way down its stipe, which tapers down seamlessly from the cap. It has a fruity smell, reminiscent of apricots and a mildly peppery taste and is considered an excellent edible mushroom. It’s perfect with white sauces garnishing poultry or lamb dishes. This decorated mushie is usually spotted at the lower altitudes of the Zagori at this time of the year.

Autumn is the best season for hunting and taking photos of boletus mushrooms in the National Park of Pindus around Zagori. The genus Boletus contains many members which are edible and tasty, not the least of which is the famed Boletus Edulis which are usually found fallen under leaves of the oak forests of the Zagori region during spring and autumn. This mushroom is considered one of the safest to pick for the table, as no poisonous species closely resemble it. They come in different shapes, colours and sizes and no two are the same. In Greece Boletus is also called “the king of mushrooms” – “βασιλομανίταρο”. Some of the more popular Boletus mushrooms which you may have heard of are the Porcini, which means “piglet” in Italian, and used by the Ancient Romans and the Cep, a large and fluffy mushroom with a chestnut and hazelnut flavour. It’s great either grilled or fried as a savoury meze or as a side dish to fish dishes, omelettes or in risottos.

This bizarre looking mushroom is also imaginatively referred to as the ‘black chanterelle’, ‘black trumpet’, or the ‘trompette de la mort’ (trumpet of the dead. The Cornucopia has an exquisite floral and subtle smoky flavour, and it is the perfect side dish for game.

A highly regarded edible mushroom and very rare species with a divine taste reminiscent of shellfish. Ancient Greek and Latin writers have extolled the nutritional and culinary value of this flavourful mushroom.  While it was first described by Giovanni Antonio Scopoli in 1772, this mushroom was a known favorite of early rulers of the Roman Empire.

The whiskered stars of Syros on Netflix