Menu
Home | People | Losing his marbles over the Marbles

Losing his marbles over the Marbles 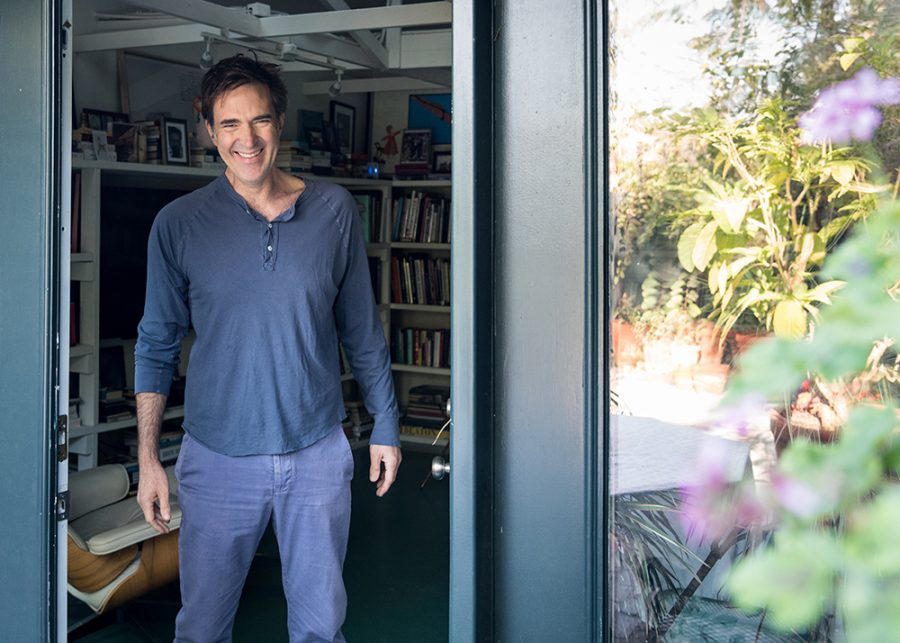 Konstantin Kakanias dons an activist hat for his new exhibition using whimsical drawings and ceramic tiles laced with sardonic humour to engage in one of the world’s most captivating cultural debates, the Return of the Parthenon Marbles.

In the few brief meetings I’ve had with Konstantin Kakanias, it’s always been frenzied, high-energy chatter.  On the phone from LA, when he should’ve been justifiably jet-lagged, Konstantin peppers his animated answers with a monologue to his young puppy Ziggy who’d just stolen his shoe and scurried across the room. Mock indignation follows. Like his quirky characters, there is something real and endearing about Konstantin Kakanias. He’s affable. He calls back. And treats an interview with a local Athenian magazine as if it were a fashion glossy institution. None of the starry airs of a vaunted artist coveted by the fashion and art glitterati. His answers are energetic, provocative, tongue-in-cheek, luscious, colourful, layered.

As someone who flits between the worlds of fashion and art amongst the beautiful people of LA (where he is based), Paris (that he calls home) and Athens (where he is from), Konstantin Kakanias’ art can best be described as an off-the-wall mix of illustration and caricature. Through the irreverently irrepressible Mrs. Tependris, his fashionista alterego, an art collector and high society doyenne who Kakanias uses as “a metaphor for the state of contemporary art and its superficial reception by the public,” he’s taken on fashion’s mighty elite – Donatella Versace, Anna Wintour, Carine Roitfeld and Karl Lagerfeld amongst others.

A recent contributing editor for the New York Times style magazine T, his illustrations have been published in several newspapers and magazines including the LA Times, The New Yorker, Interview, Vogue – and Athens Insider’s inaugural cover in 2002! His drawings, paintings and sculptures have been exhibited in New York, Paris, Los Angeles, at the Basel Art Fair and the Armory Show and in his native Athens.

A passionate ceramicist and chef at heart, Kakanias concedes resignedly, “The thing I love and hate the most is that I do too many things … and I have no one to tell me what to do, not even Mrs. Tependris.”

In return, Kakanias has an impressive body of work to show for all that restlessness and versatility. After graduating from Studio Berçot in Paris, Kakanias quickly made the crossover from art to fashion by collaborating with some of the biggest names in fashion: Yves Saint Laurent, Christian Lacroix, Cartier and Dior; iconic brands such as Tiffany and Barney’s NY; a comic book collaboration with Diane von Fürstenberg Be The Wonder Woman You Can Be (DC Comics 2008); jewellery designs for Swarovski; and commissions for Frederic Malle’s fragrances, Nars cosmetics and swimwear brand Orlebar Brown.

In THAT’S MINE, BITCH! DO NOT TOUCH. BACK OFF, that runs simultaneously at the Kalfayan and Rebecca Camhi Galleries, Kakanias takes on the monumental British Museum.

Beyond his innocuously glam, satirical sketches, he hopes to engage in a debate that has consumed him, and indeed, Greece and Britain – a call to right a 200-year-old wrong for the return of the Parthenon marbles, described by French Romantic poet Alphonse de Lamartine as ‘the most perfect poem ever written in stone.’

Mrs. Tependris uses her intrepid wit and flair to send out a few missives. A sharp and clever gambit to address an issue that has been laced with political innuendos and nationalist invective, the exhibition runs until September 15.

Who is Mrs. Tependris and how would you describe your relationship with her?

This figure was invented and re-invented throughout my life in different stages.. a woman who would appear to me in moments of creative bliss or desperate loneliness. I could have never imagined that my imaginary friend, my saviour, my muse, would eventually take real form and have a name. Or that now, after thousands of drawings, numerous exhibitions, performances, and books, that I would still be busy with her. Mrs. Tependris – she always goes by her married name – is a fashion culture-obsessed character. She is sometimes me (or sometimes I’m her), but she can be anyone (though she is not for everyone). She escapes and does not appear to me for years, but she always comes back. It is a real relationship.”

Is Mrs Tependris being ‘woke’ a reaction to the #MeToo campaign and a collective urge to disrupt cultural and colonial stereotypes?

#MeToo, is very important, desperately needed, and very belated. I’m not sure if Mrs. Tependris was influenced by that, but she told me that she thinks that the 21st century is the century of Restoration!

The last time we met Mrs Tependris, she’d emerged from her cryogenic chamber in time for a fashion comeback. How has Mrs. Tependris morphed from her uber-fashion conscious self to an activist?

Look, Mrs T. is totally unpredictable and has always acted on the spur of the moment. She is impulsive, surprising, and has no patience.  The truth is that I have been obsessed with this cultural crime since I was a child. When i decided to have the two shows in Greece simultaneously, I realized that the Parthenon Marbles is an urgent subject – as are all issues and crimes which have not been resolved (when a solution is offered so easily.) Mrs. Tependris, one Hollywood afternoon appeared, and told me “Let me handle it darling, let me write a few letters)! 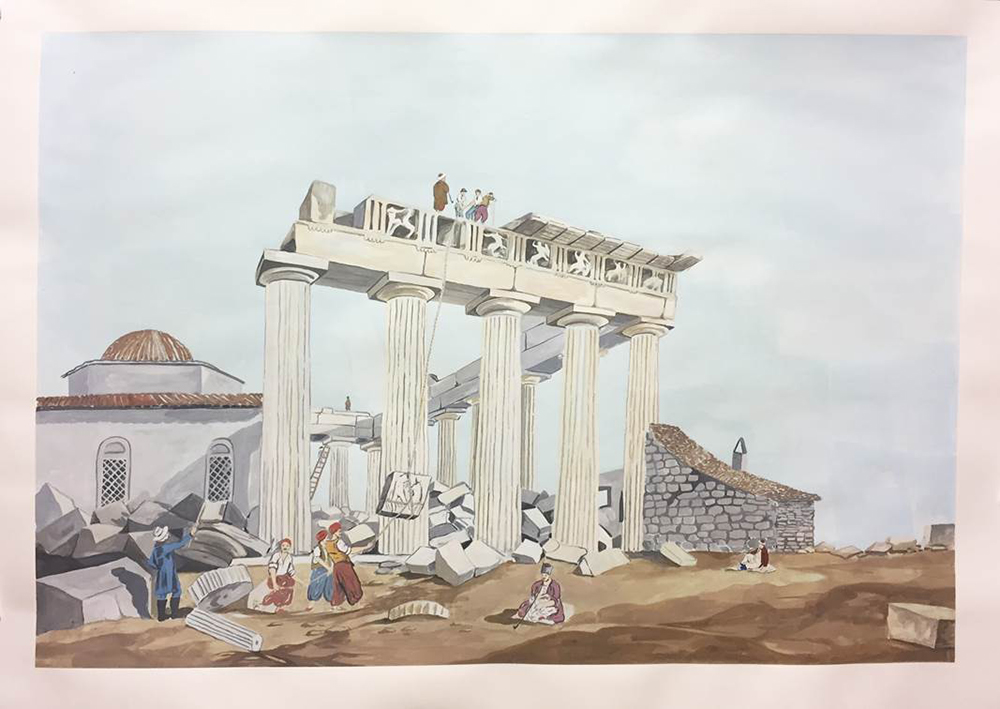 From the exhibition at the Kalfayan Gallery

How interesting that Mrs. Tependris joins legions of celebrities from the late Christopher Hitchens to Vanessa Redgrave and Stephen Fry to demand the Parthenon Marbles back. Do you believe, as Mrs. Tependris notes in her enraged missive, that ‘the occidental museum is the essence of the purest form of colonialism’.

Yes, I do believe that. Not all museums of course, but the museums that exhibit looted and stolen art – absolutely – don’t you?

Is comedy indeed the best way to intrude into the artistic DNA – the safest way to pass a message or to communicate? Can comedy be a catharsis of the evil and the corrupt?

Comedy is a very difficult genre, to achieve in its highest form. Humour is essential in our life, it has a direct effect on our thoughts. Although amusing, it can deal with serious matters.

What has been the single biggest influence on your art?

I love the unlimited freedom inherent in contemporary art, the fact that anything can be art. I love the wonderful sense of humour by Goya. I love the terrible visions of Erich Von Stroheim, Kenneth Anger, James Ensor, Félicien Rops, as well as the lightness of Constantin Guys and Christian Bérard. I live for rococo, but deep inside me I also recognize the influence of early Byzantine art. I am very easily influenced by anything. It is a drawback of my character but since I cannot do anything about it, I try to turn it into something positive.

What do you dream of?

I live a lot in the past – I suffer from nostalgia, I engage in nostalgia – not kaimos. It is sweetness, not bitterness. I see a lot of my past in my dreams – dreams of people who appear in my dreams. But I’ve never dreamt of Mrs.Tependris. She only appears to me in the daytime.

Where do you consider home?

With Athens, it is love and hate… in fact, Love and Hate, in capitals. There are times in the past few years that I thought that I had left my soul in a dumpster in Hollywood, but lately it seems like it has been redeemed and sent back to Paris. I went for the first time to Paris when I was eight years old, and today, I know that Paris is and will always be my real home.

What is it that you so love and so passionately hate about Athens?

I love Greece very much, Athens is more complicated for me – I grew up in Athens, it was very different then, there are many things I am offended by (therefore the “hate”) – but I love the warmth and immediacy of the Athenians.

What can we expect from Konstantin Kakanias next?

I’m having an exhibition at the Gavlak gallery in Los Angeles in a few weeks with a selection of drawings I created for T magazine, the style magazine of the NYTimes. I am collaborating with Tiffany again (after 25 years) and will continue working with ceramic tiles. I love these works that can be installed in living rooms but also showers, washrooms, corridors, gardens, and can be washed with Ajax! 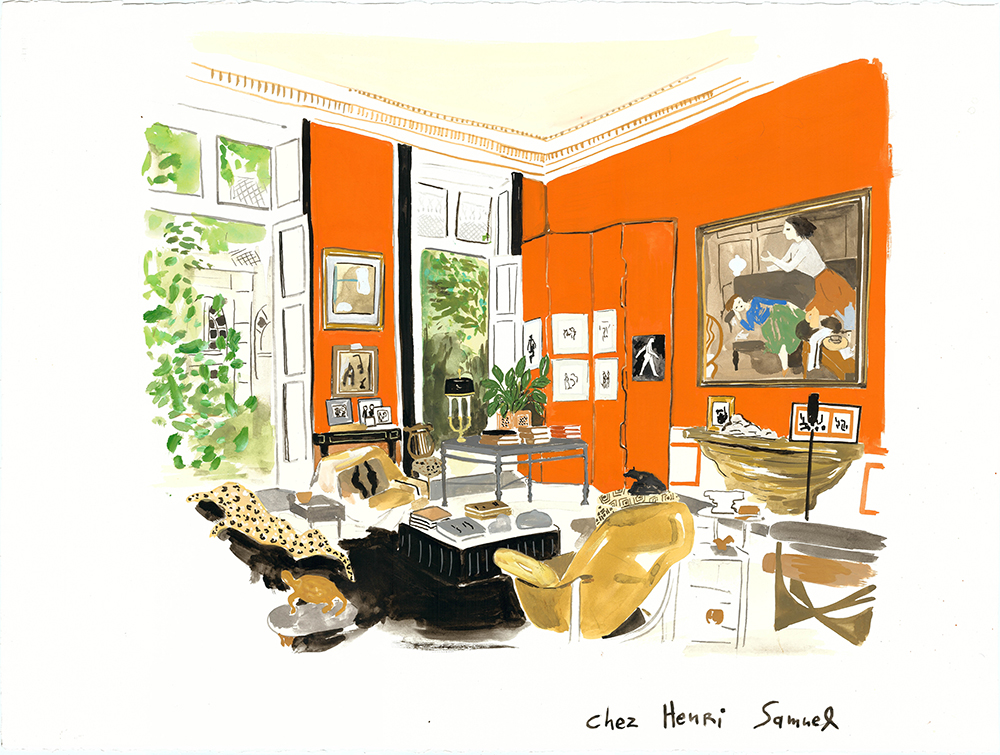 What song is playing in your head right now?

“Beam Me Up” by Django Django

The last thing you Googled?

The Wikipedia page of Faris Badwan (plus images) – the lead singer of the Horrors.

Last time we met, you had Renzo in tow. Now it’s your puppy Ziggy who seems to have taken over your life. Dogs to you are…

Dogs for me are my example for a better living – they teach me how to be a better person. 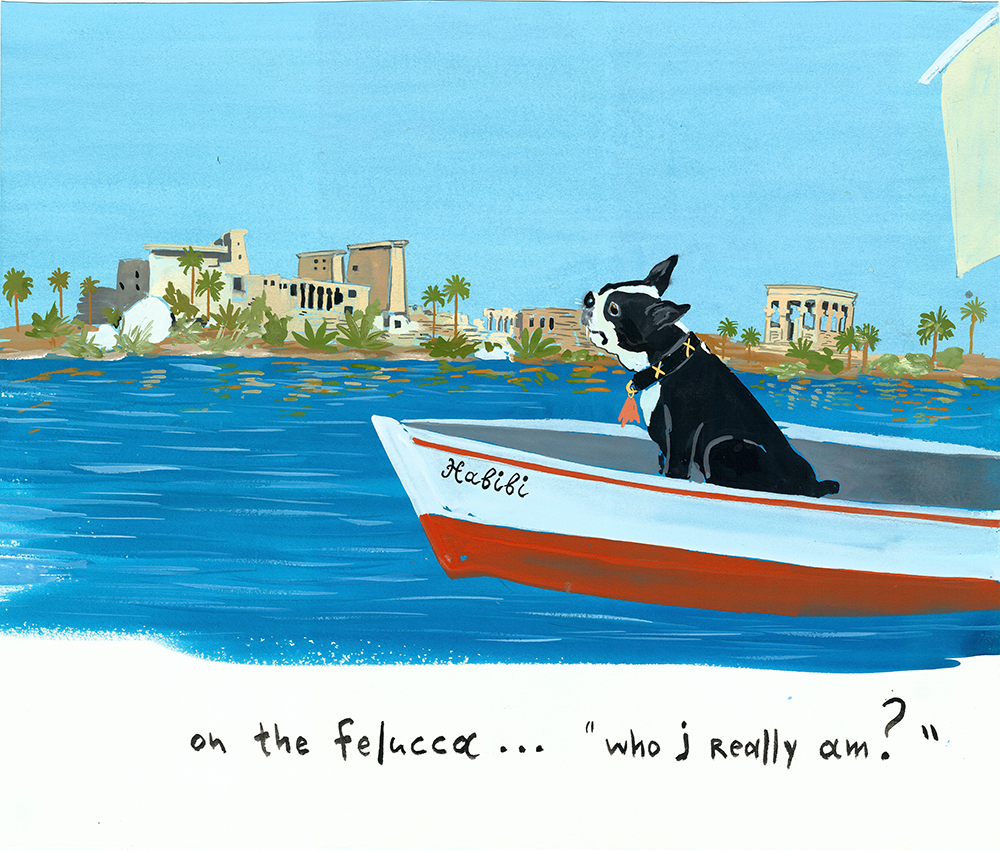 The one book you’d like to read but haven’t…

The Memoirs of the Duc de Saint-Simon

Greece to me is…

The simplicity and magnificence of the simplest and purest things.

In my bed, smiling…