Menu
Home | Travel | Go with the Flow: The Andros Skate Park that Became an Art Gallery 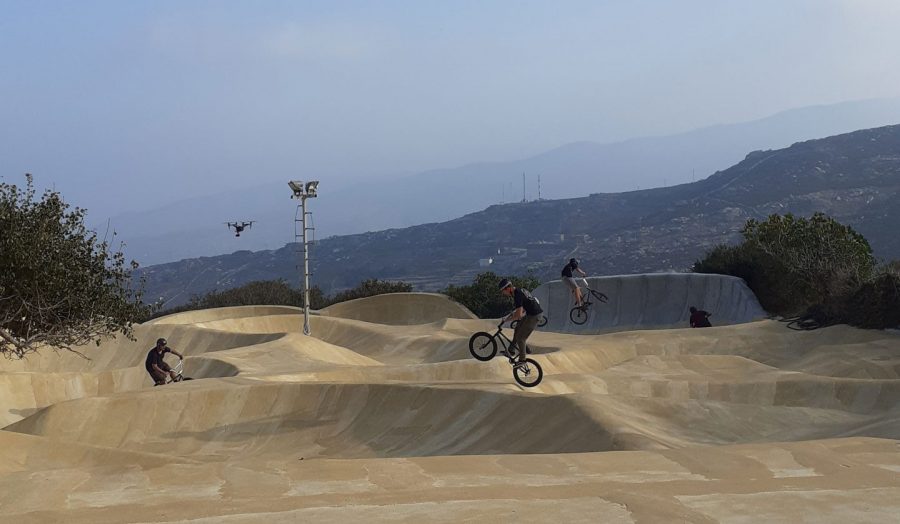 Nikos Garyfallos’ cutting edge skate bowl, Blue Enigma, has turned a sleepy Andros village into a magnet for skaters, bikers and bladers the world over. Dedicated to his grandparents, this hand-sculpted marvel also works double-time as a dramatic open-air gallery with a difference, Amalia Melis notes.

Making your way through the quiet village of Apikia on Andros island you come across what appears at first to be a red tulip petal or sea shell-like wave sculpture protruding out among the neat village houses tucked in the wild greenery. Apikia village known for its healing Sariza Spring mineral water, Pithara waterfalls and many ancient walking paths has also put itself on the map recently because of one man’s dream made real.

Nikos Garyfallos, an engineer whose family is from Apikia, created Blue Enigma on the land his grandparents owned. They used to run Romantica taverna at that location for many decades. A bicycle enthusiast, Nikos decided to hand-sculpt his unique Enigma Bowl right smack in the middle of the village on his grandparents’ land.

After remaining closed for several years, Romantica was waiting for a breath of life to be injected into it. Nikos, who studied mechanical engineering in the UK and was searching for what to do next with his life in a country on the brink of a financial crisis, went back to his roots: Apikia, to visit his grandparents. With a UK job offer in hand and two weeks free until he left, he went back to Andros where he was born and raised as a child. Something pulled him closer to the earth on that stay.

Apikia is known for its flow, you can hear the river; water is so abundant around us. I was always attracted to this from my childhood. You can’t help but be aware of nature around you here. I had a two-week break between leaving for the UK and going to visit my grandparents. Something happened inside me, I could not leave the place I grew up in. I was always intrigued by the beauty of a bicycle and I was always looking for a job related to bicycles which I could not find.  I wanted some kind of career that allowed for what I liked: the idea of how we can adapt as humans with nature and not as machines.

I also wanted more time with my grandparents so I let go of the job offer and decided to focus on the magic of bicycles. I moved to Andros permanently to see how I could put these two loves together.” 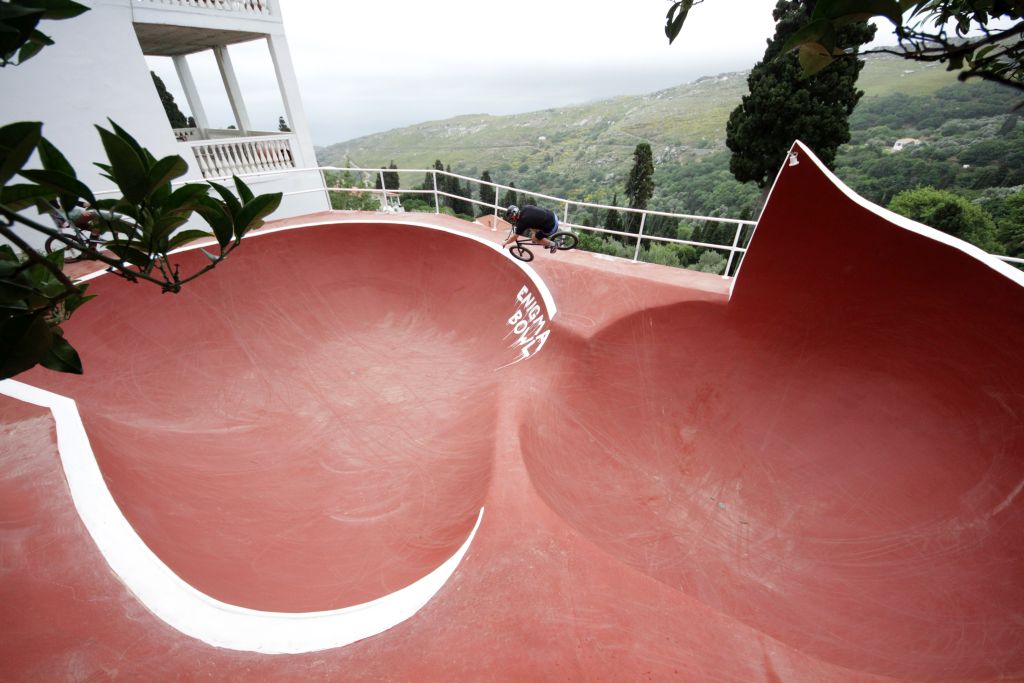 As a child growing up in Apikia, he was fascinated by the tricycle he rode at 6 and when he graduated to a bigger bicycle he was hooked. “Even when I was a kid riding my bicycle I was haunted by the question: how is it we can balance ourselves on this type of machinery? It was magical.”  Fascinated by the concept of balance he eventually discovered BMX and later on the discovery of gyroscopes.

“The first year I was here I worked in construction at a local place on the island and I learned what kind of materials they used to build structures, what worked and did not work with weather conditions which could be harsh in the winter. I had no working experience in dealing with cement and other materials.  I decided to make a Bowl as an installation in the back property of the taverna. From its inception, I wanted this place to have an artistic bent. I wanted to make some shape that was natural.  I did not want it to be prefabricated; that would be boring. First I made a model with my hands using clay. I wanted to make the dimensions more finite and give the curves more flexibility. Near the end of the design process, I modified it enough to make the shape look like a spiral sea shell-like wave.

Bowl for those who don’t have the lingo for BMX sports is defined as a big object in which one can, with any kind of medium with wheels, flow around inside it. You can experience flow within it and that is what makes it magic, Nikos says.

His installation raised quite a few eyebrows in Apikia village especially since few, if none of the villagers actually use bicycles. No one could figure out what this new red sculpture was about especially since it was so close to other houses and so unusual. 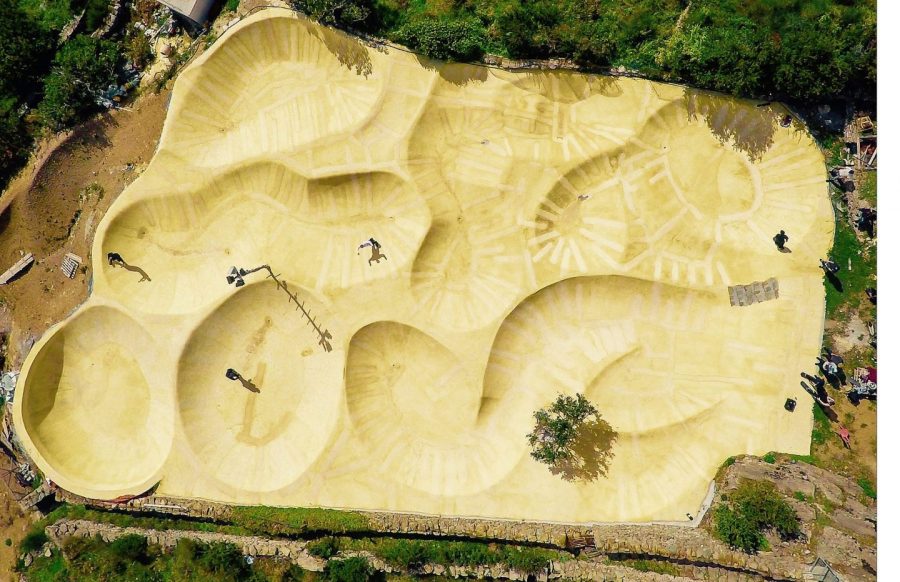 “My gut knew something had to be built there but the shape actually emerged in the end. I didn’t know where I would end up with the design. I started the Bowl in 2010 and finished it in 2011,” said Nikos.

Before long, riders began seeking out Blue Enigma on the internet. The combination of a natural landscape and Bike bowl in a sleepy little Greek village intrigued enough BMXers to start creating a buzz on social media. Word-of-mouth spread and soon skaters, bicyclists, roller bladers started flocking to Apikia for a vacation experience unlike those available indoors for skaters and bicyclists or in artificially made parks.

Not being familiar with BMX and the world of extreme sports, I watched people devoted to these sports find him from the furthest places on the map like New Zealand, Australia, Europe, the United States. Artists, BMX stars, extreme sports lovers, hikers were rewarded for their trek to Apikia. The last time Blue Enigma was open I met with a group of women who live in Sweden and are part of Chics and Bowls, an international group of sports enthusiasts promoting extreme sports for women. “We arrived at Blue Enigma late at night and all was dark. We had no view of what the village might be like or anything. When we woke up in the morning we couldn’t catch our breath. Nature, the Bowl, we had no idea. We are already planning our next trip back here,” said Sanna-Maria Gerbrand.

Other than renting his few rooms to those who use the facilities Nikos promotes a philosophy that focuses on going back to nature in his own life.  Nikos believes the bicycle is the unsung hero to the urban transportation nightmare drama most of us encounter with our vehicles. This man plans on changing things one Bowl at a time.

He took his vision a step further in 2011 when he created Gratitude Trails; the first of its kind anywhere due to the process of its creation. He did not sit behind a computer screen carefully constructing dimensions for a bicycle park, he visualized it and one line on the dirt followed another naturally as he rode his bicycle through it keeping with his philosophy of developing it organically. Nikos started off by making individual trails with natural curves and paths that eventually became a unified terrain that looked like a desert with its dune patterns. Just as dunes are created by the wind, these dunes are created by the flow element of gravity for bicyclists, skaters, roller bladders to ride in while surrounded by nature. Last winter he added another curved wall to the Trails, all done by hand.

What Belgian riders told me when they rode the Trails was the overwhelming sense of peace they had when gliding into the deep curves, following the flow going into and moving through the smooth walls of the trails. 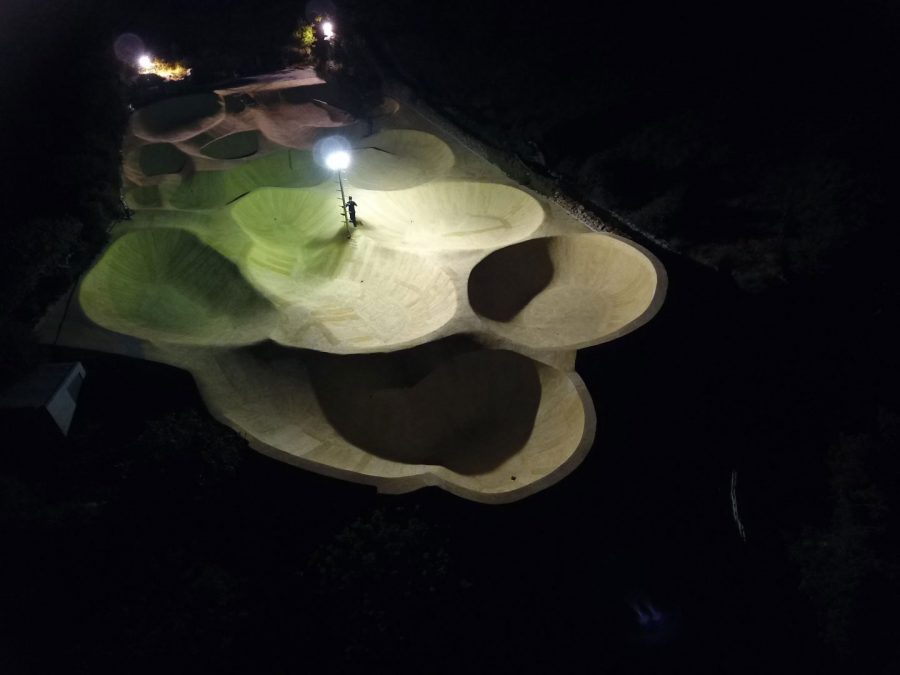 View of Blue Enigma Bowl at Apikia on Andros by night

Among the devotees to Blue Enigma is BMX legend Zach Shaw from the U.K. who was up at the Trails last year before lockdown and has returned several times to Blue Enigma. “I travelled everywhere and rode my bike at parks all around the world but this place is unique. Hard to imagine that Gratitude Trails and Enigma Bowl exist. This is so hard to beat. So many new lines to discover no matter how many times I ride here. I want to come back with friends,” said Zach.

Why did Nikos name the trails Gratitude Trails? “These two hectares of land were cultivated by my grandparents and if it were not for them I would not have been able to follow my dream. I am grateful to them.” 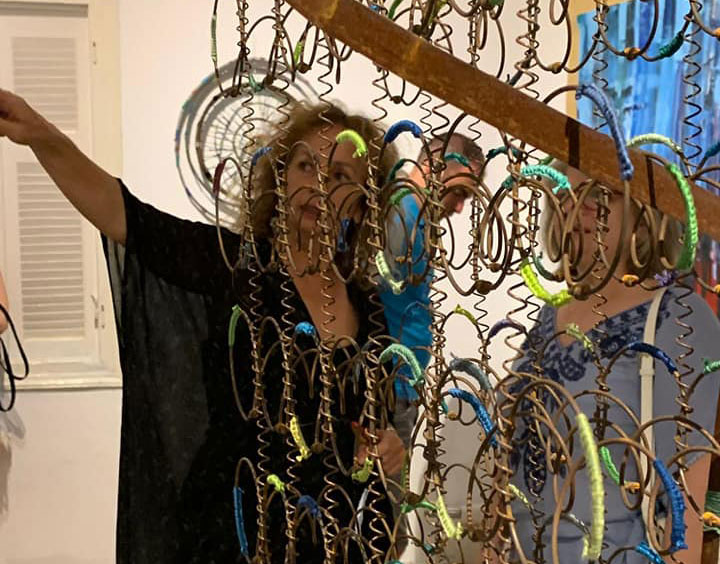 As of 2018, Nikos went a step further with his Blue Enigma dream. He placed a call for participation on Instagram to artists and  organized Objects & Flow, a group art exhibit that brought together artists from Portugal, United States, Greece, Australia. A combination of installations, assemblage pieces, paintings, sketches from the different artists addressed the issue of flow and the process of creating.

What impressed me most when I joined the first Objects & Flow group art exhibit at Blue Enigma in 2018 with my own recycled assemblage sculptures was the offbeat flow Nikos had whose vision for Blue Enigma is an on-going artwork-in-progress in so many ways.

“One throws away logic when one is in the space needed for creative flow.  The idea of creating an art exhibit was natural for me since all forms that have the element of flux and flow come together. I experimented with it like a spiritual process I decided to put together a group art exhibit that reflected the evolution of art at the end of World War I, trying to discover the mystery of nature in ourselves and as a form of expression to give us meaning and purpose in our existence, I wanted to use art as a celebration.” Nikos said.

Not quite a bar or a hotel or an art gallery or a BMX skate park alone it is a woven tapestry of Niko’s world/life view embracing and offering all these things and services at once to anyone who comes within range of Blue Enigma.

Blue Enigma’s last group art exhibit before lockdown focused on Objects & Flow II: Reconnect. The Wave Room from that exhibit is on permanent display. Its theme asks how can we reconnect with nature and transform ourselves and our souls through art. Nikos dedicated the exhibit to Eric Laithwaite the scientist, inventor of the gyroscope and fascinated observer of moths and butterflies.

Surviving a year with two lockdowns and interpreting the complexity of nature materialistically, we have reached a dead end intellectually,” said Niko, “the artistic concept of Blue Enigma is to bring a deeper understanding of the relationship between inner and outer nature. My hope is to bring people together to experience this in Apikia, Andros.

As Nikos stood on the land where he made Gratitude Trails he reflected on what makes him tick: “wind, light, water, gravity all have some kind of wave behaviour. If gravity is a wave how can you grasp it? The only way to experience it is by touch. You can’t see it or hear it or smell it. To be more specific the gyroscope effect that comes out of the spinning wheel behaves as a reflection of gravity which feels like a spiral wave,” Niko said.