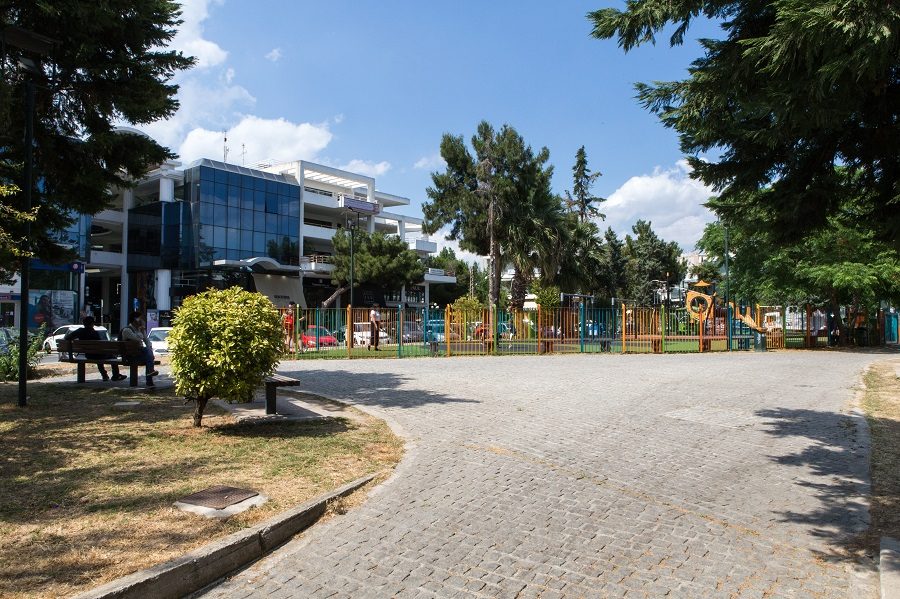 If there’s one thing you can count on about Glyfada – that shiny happy hub of the Athenian Riviera – it’s that nothing ever stands still for long. New favourites emerge. Old ones quietly disappear, often overnight. Glyfada – along with its “frenemy” in the north, Kifissia – is where hot new flavours and trends are rolled-out first; to be road-tested on the Athenian consumerati. Athens Insider taps into the true evolutionary spirit of this cosmopolitan coastal capital.

Glyfada is skirted by the leafy Glyfada Golf Club, the only 18-hole golf course in Athens and the old international airport at Ellinikon, which is up for complete redevelopment in an €8 billion project. The American airbase at Ellinikon (which closed in the ’90s) lent Glyfada its unique, ‘Greek-American’ atmosphere which is palpable to this day. Glyfada has always been at the heart of Athenian summer living, but it carries its laidback summer vibe year-round. The Hellenikon project, which is expected to transform the whopping 1530- acre complex into a new point of reference with a model city, a world-class metropolitan park offering new hotel accommodations, luxury residences, landmarks, extensive green areas, thematic tourist attractions, and cultural and exhibition venues. We suggest you invest, invest, invest! To the North-East and South, is the urban residential sprawl which spreads over to the rocky landscape of Mt Hymettus. To the South are the gentle lapping waters of the Saronic Gulf, five marinas and prime waterfront real estate.

The Queen of the Coast

Glyfada has always been the bold and brazen counterpart to Kolonaki and Kifissia’s more staid charms, the entry point to the recently minted Athens Riviera with bustling retail by day and a vibrant night-life by dusk. A recent overhaul to its roads and pedestrian walkways promises a more shopper-friendly infrastructure and more importantly, a sense of renewed possibility. Its fresh, revitalized looks announce to the world, ‘Hey! No crisis here!’ The Big Squeeze meant that a lot of mediocre, but also some beloved establishments, closed shop. But a braver, millennial consciousness has also sunk in with wave of edgy boutiques, a slew of fashionable good-time cocktail bars and an energetic, upbeat patina that’s pitched somewhere between SoHo Village, Little Italy and L.A. Luxe.

A braver, millennial consciousness has sunk in with a wave of edgy boutiques, a slew of fashionable good-time cocktail bars and an energetic, upbeat patina that’s pitched somewhere between SoHo Village, Little Italy and L.A. Luxe.

The heart of Glyfada’s diverse and vibrant shopping district runs along Metaxa Avenue and Grigoriou Lambraki Street and spreads throughout the outer laneways. There’s a spate of upscale retail stores opening, and it’s rare to see a shuttered shop window today, unless it has a large red banner spread across it, announcing, ‘Opening Soon!’

At their newly opened boutique at Four Seasons Astir Palace Hotel (Apollonos 40, Vouliagmeni), sate your cravings for opulent, decadent and lavish avant-garde pieces with a choice of over 30 designer brands at Luisa (Jimmy Choo, Jacquemus, Celine…need we say more?) The window displays change almost daily, and the on-the-ball staff redefine what it means to create a ‘luxury’ customer experience.If their Instagram feed is anything to go by, we know you’ll soon be falling for their fashion-forward beach picks too.

For primped-up resort-wear that cause a ruffle, sunshine essentials and swimwear that flatter, look no further than Saltwater. Marie Zacharaki, who launched Saltwater in the late 90s earned her fashion pedigree at the Domus Academy in Milan, studying under Gianfranco Ferré and Diego Della Valle of Tod’s, but it was her six-year stint working with Jean-Paul Gaultier that really honed her fashion instincts. Saltwater stocks all the top-of-the-line brands and Marie’s trained eye in scouting fresh talent have paid dividends! Take your pick from Melissa Odabash, Vitamin A or Stella McCartney.

Style your feet with fancy Ferragamo flats to classic courts and statement Alexander McQueen sandals at Kalogirou (Metaxa 18). Snag a Prada or Michael Kors clutch while you’re at it. Browse for some on-trend brands and affordable Nine-West or DKNY shoes at Haralas (Kyprou 72).

Whether you’re in the market for bedazzled lenseless glasses or vintage-inspired chunky frames, aviators or retro-geometrics in every hue, stylish eyewear fans can get their fill of designer brands in Glyfada.

Up your style quotient at Panaidis (Artemidos 2) with Chopard (yes, they’re into eyewear too!), Mikita, Chanel and a whole range of futuristic, attention-drawing shades. Panaidis also crafts bespoke, hand-made sunglasses in wood, leather or even fitted in with gemstones, for a bit of extra bling. 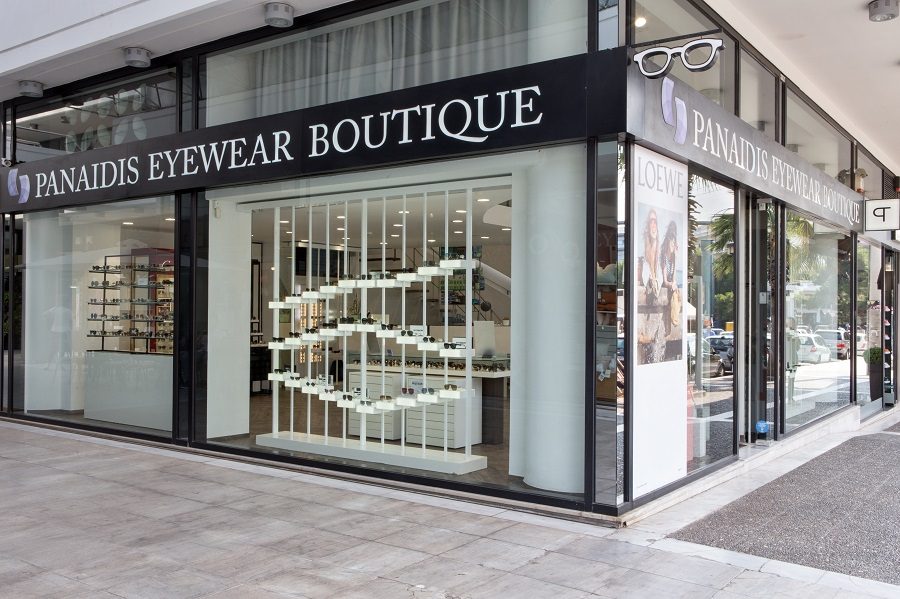 At Four Seasons Astir Palace Hotel (Apollonos 40, Vouliagmeni), the Panaides chain operates the eyewear boutique Alós. This is a candy store for grown-ups that stocks statement sunglasses that will definitely elevate your summer.

Hondos Centre the sprawling department store right across the Aghios Constantinos church, is a labyrinthine cathedral for the beauty- conscious. Peruse its five floors for sun-tan lotions to water-proof cosmetics, hair-care products and summer-sprays of every conceivable brand.

A family-run multi-brand luxury eyewear boutique whose shelves are lined with everything from from artistic, eye-catching eyewear to simple, elegant styles. Kokkoris Eyewear (Plateia Esperidon), has a loyal following among locals and stocks classic Ray Bans to the latest from Tom Ford, Dior, Yves Saint Laurent and Balenciaga. 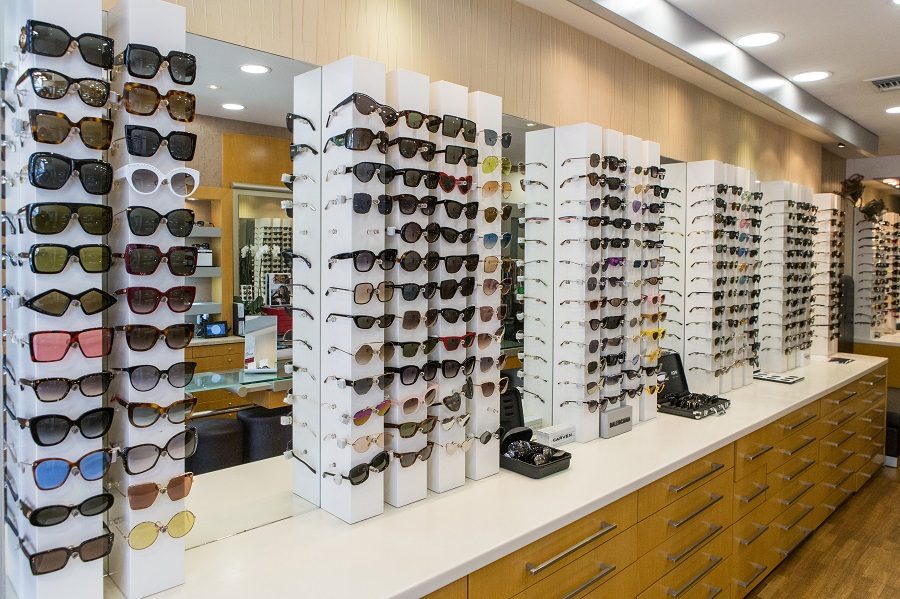 At Occhio Papavassiliou, eyewear is not an embarassing necessity, it is a fashion choice. For a selection of Moncler, Guess, Gant, runway-favourite Pucci and more, head to Occhio Papavassiliou (Metaxa 34). Friendly staff who gently coax you into picking the right eyewear accessory and also offer optometry services. 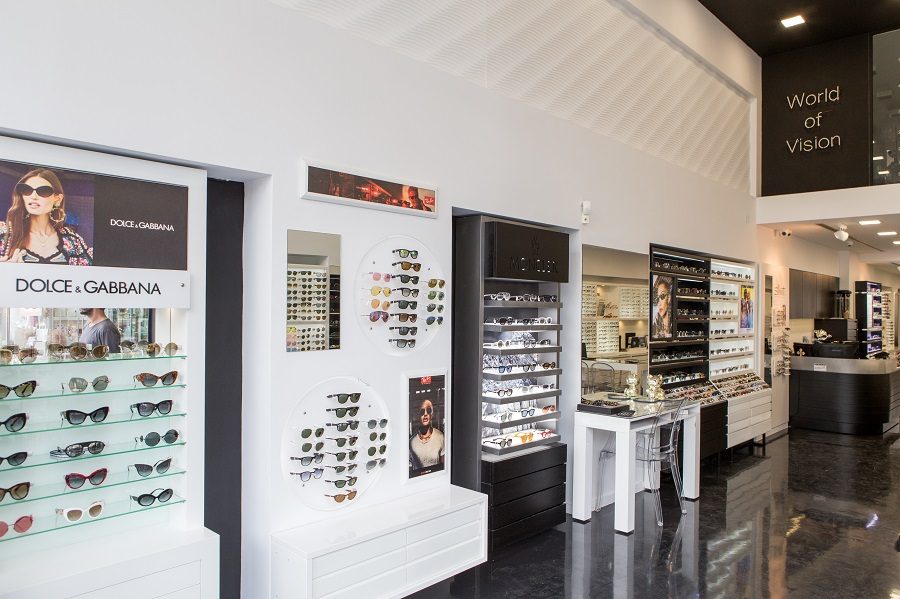 Rolling with the times, this fine-dining establishment has split in half to re-invent itself as a Night and Day experience. Its cool design is a draw as is its inviting 3600 all-day dining proposition. Pere is now a Gourmet Burger Bar/Restaurant  by night, while Ubu next door offers “Pure Food” replete with healthy breakfasts, brunches, vegan fare and the like during the day. Its upscale menu and inspiring cocktails have earned it a loyal following as is amply evident by the night-owls who pay their daily pilgrimage here.

The thumping nightly party scene, and we do mean thumping, is what makes Pere one of the few bars where you’ll see Greeks letting their hair down and dancing it up. The festive mood usually makes up for the lack of elbow room.

Walking into Sea Spice is like getting aboard a luxury liner. Shaped like a sleek, glamorous yacht with a staircase that looks like a giant cinematic reel, this is clearly the new People-Watching Headquarters of Glyfada.

Sea Spice, Pere Ubu’s sister establishment, has just the right degree of fuss and fusion to elevate the senses without destroying the soul of Greek seafood.  Its bar alone with its veined marble-top should attract barflies, but the inventive dishes here and its catchy Greek anthems make it a popular local favourite with seafood afficioandos and Southsiders who want to party until the wee hours.

Part of the wave of enthusiastic, post-financial-crisis upscale all-day café-bar-restaurants, this sprawling space spread across several floors, oozing flamboyant Miami-esque appeal. It comes equipped with a private cigar lounge, doubles up as an art gallery, serves an interesting mix of dishes to cater to eclectic tastes, and has a killer bar to boot. A giant olive tree sprouts in the middle of its sun-lit atrium, making Blends as much a winter destination as a summer one.

When George Papakostas launched Burger Joint bang in the midst of Greece’s excruciating crisis in 2011, you could tell he was having fun, as the cheeky tagline was a tantalizing play on the initials, BJ.  Fast-forward to 2018, and Vittoria Gati, his Italian venture, located right next to the flagship Burger Joint promises the real deal. More New-York Italian than Napolitan, the dishes are lighter, more playful but with the unmistakable smell and feel of Italy. The décor, by Desani, in muted rose quartz and teal is inviting.  And as one would expect, the food doesn’t disappoint either.

Spiti (Lazaraki 12) for scrumptious well-made portions of fusion Mediterranean food featuring pasta, meats and salad. Feedel (on the corner of Kiprou and Zerva 24) for contemporary Greek cuisine with a relaxed, inner-city style. Divan (Zisimopoulou 9) for delicious mezze plates from Lebanon, Persia and Turkey. El Catrin Cocina Latina (Fivis 15) a full and eclectic Mexican menu including Tacos, Burritos, Quesadillas and Fajitas. Pasiphae (Lazaraki 63), an excellent Cretan restaurant where if you’re lucky, you might hear a Mantinada rhyming couplet from an amorous waiter. Silar Dining Couture (Artemidos 3), fine dining featuring seafood, beef and winged-game. There is a pairing menu which is always fun. For eggs benedict and coffee head to Soleto (Laodikis 33) or Estrella (Nimfon Square) for breakfast pizza with avocado, feta cheese cream, chilli Sriracha and two fried eggs. For a swish dining experience, we’d recommend Ark (Grigorious Labrakis 2) by the water, look no further. Balux Pool Seaside (Poseidonos Avenue 58) for reggae and cocktails on the sand, OPUS (Pandoras 9) where Greek singer Antonis Remos is a regular, is perfect for coffee, a delicious meal, or a late-night dance.

Paul (Kyprou 68), French bakery for post-shopping quiche and tart pit-stops. Carpo (Grigoriou Lambraki 20) for freshly ground coffee and to stock up on chocolates and nuts Holy Spirit (Laodikis 41) for great cocktails and guilt-free, low cal Elderflower concoctions.  Oh Mama! (Kyprou 48)for mouth-watering breakfasts and over-generous cocktails! Pecatti di Gola (Kyprou 50) for authentic trattoria fare. Kazoku Sushik (Kyprou 59) offers the full flotilla of standard sushi bar fixtures that Greeks have acquired a taste for, in a sleek black and bamboo space. Amigos (Kyprou 65) for a slice of downtown Rio during Carnival head here on Thursdays for a Live Salsa Night – a merry riot that must be experienced at least once.

In Glyfada, our favourite Glyfada go-to for that “something special” is Zerteo Jewelry. The creation of Athenian brothers Zerar and Teo, whose sleek and trendy designs have amassed an urban sophisticate fan-base of all ages, ZerTeo (Kyprou 78) is jewellery to fall seriously in lust with. Just like Rita Ora did. The pop star appeared on the cover of Harpers Bazaar proudly sporting her own Zerteo evil eye “mati” bracelet. Snag yours and other equally desirable, easy-to-sport jewellery pieces to make a bold style statement this summer. Follow them on instagram.com/zerteojewelrymen 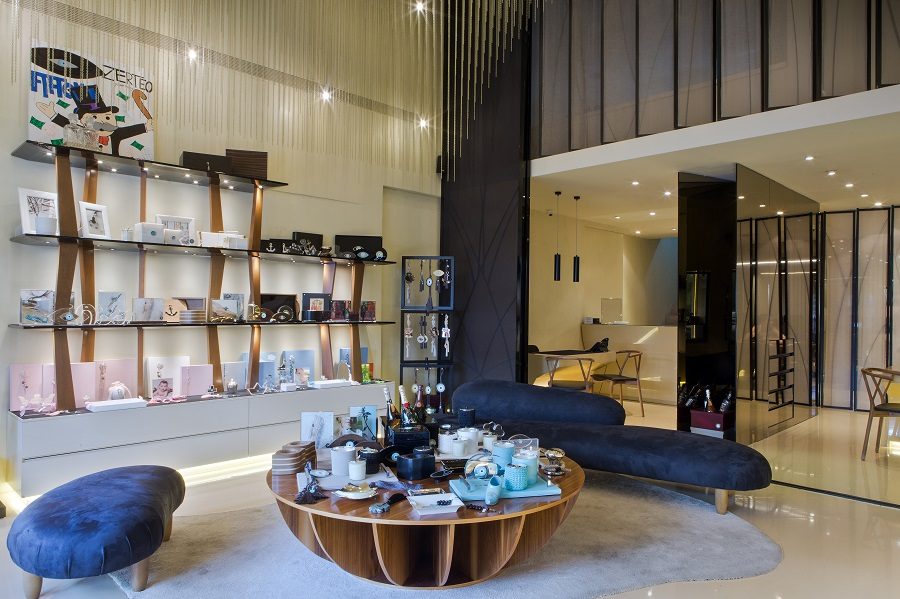 A Glyfada institution for the past eight years, Giorgia P (named after its intrepid entrepreneur Georgia Papachristou), stocks all your summer essentials from kaftans, cotton and linen dresses plus flattering swimwear by up-and-coming Greek designers. 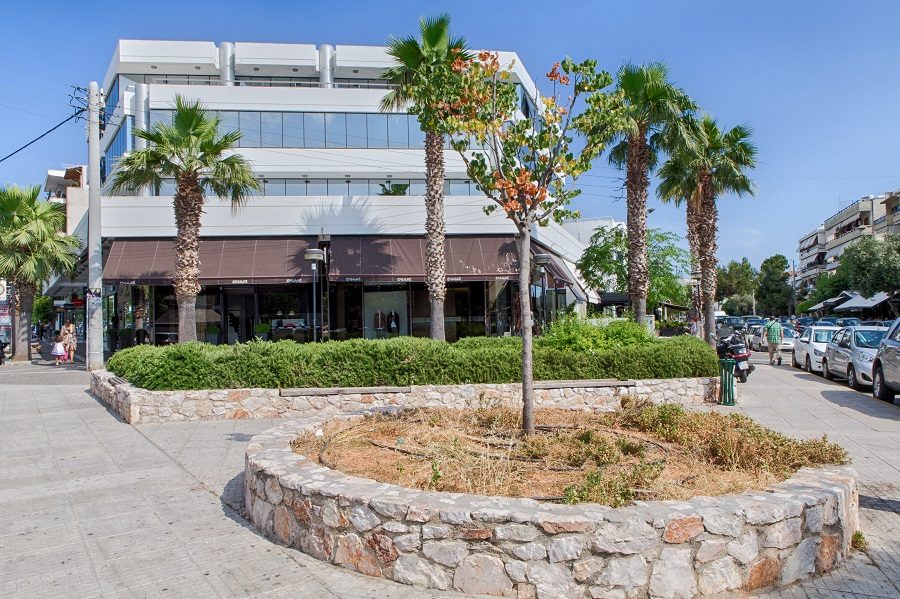 Beloved of celebrities, Zilly (Kyprou 51) occupies pole position among the slew of architecturally-designed, mood-lit, high-end boutiques that colonise this stretch of Glyfada’s bustling Kyprou. With a label-stable including Denim x (Alexander Wang), Marc by Marc Jacobs, Alice & Olivia, Isabel Marant, DVF and Helmut Lang, this is statement dressing at its loudest. Boutique 52 and Boutique 55 (Kyprou 52 and 55 respectively) for slinky urban leisure wear with a “mix and match” philosophy that promotes up-and-coming Greek designers and international brands. Another Glyfada institution A La Mode (Grigoriou Lambraki 22) has been catering to fashionistas with a penchant for all things Miu Miu. If you like cutting-edge clothes with heightened flirtiness, Zadig & Voltaire (Kyprou 64) is your temple and of course, there is always Juicy Couture (Grigoriou Lambraki 16) for the sequin-shimmer-velvet set.

If Athens were a dating app, which way would you swipe?

Do you see your child as a future adult?