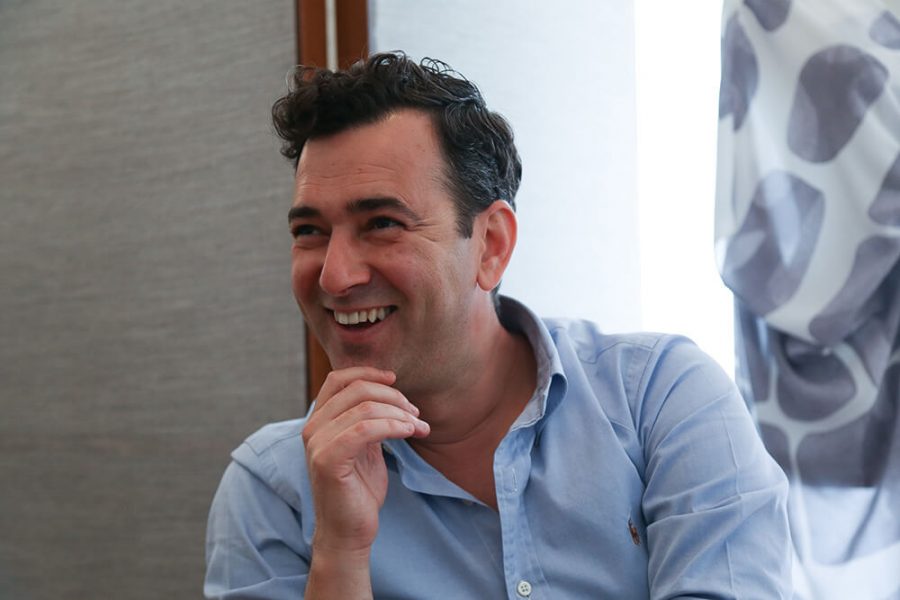 Fashion high priestess Suzy Menkes once described him as the man who “turned Grecian folds into 21st-century clothes” and his effortlessly fluid designs are anchored on the principles of complex simplicity and impeccable technique. Angelos Bratis – who worked alongside the likes of Vionnet as head designer and was hand-picked by Giorgio Armani to show at Milan Fashion Week a couple of years ago –  is one of the most exciting Greek fashion talents to have made his mark internationally. Insider’s Sudha Nair-Iliades caught up with him just ahead of the launch of his new store in Mykonos.

Angelos Bratis is at his very sparsely decorated pied-a terre that serves as his atelier in central Athens. It is an unfettered space with just a couple of Eames chairs, a bare wooden table, austere white walls unadorned but for a lone Yiannis Moralis painting, whose sensual, even sexual forms have found their way into Bratis’ purist Grecian dresses. The only hint of colour stems from rolled bales of fabric and his hallmark drape dresses. A copy of the latest issue of Home and Country’s UK edition featuring an 8-page photo essay on Bratis’ home that he shares with his partner Justin in Northhamptonshire graces the table. In contrast to his stark Athens pad, his luminous country house boasts an eclectic mix of Italian art deco and French vintage finds, with uplifting bursts of fuchsia and teal. The décor apparently changes almost weekly, as do the music and cuisine, to reflect each week’s “new aesthetic”.

From the 12-year old boy growing up in a tiny village in the Peloponnese, who rode the bus for two hours to spend his hard-earned pocket money on fashion magazines, to being touted by fashion’s biggest influencers – Vogue Italia’s Franca Sozzani and The International Herald Tribune’s Suzy Menkes, (now International Vogue editor) – as one of the prominent upcoming designers to watch, Angelos Bratis has indeed come a long way.

Today, it’s a more philosophical 40-year old Bratis who sits in front of me and looks back on the heady hype of his early career. Disarming and frank, he pours himself a cup of black coffee, and leans back languorously to reminisce on his childhood and assesses what success means to him now in 2018. 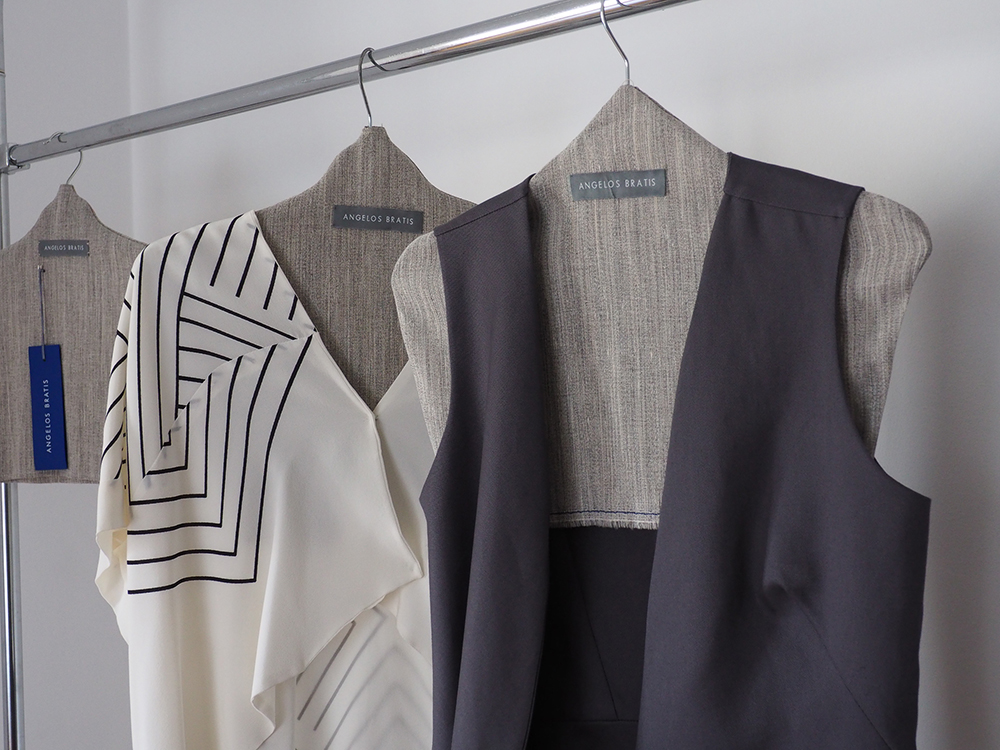 What does style mean to you personally?

You’ve been described as a Greek with an Italian address who mastered his craft in the Netherlands and you now split your time between the UK, Mykonos and Athens. Where is home?

I come from a family that moved all the time because my Dad always had new ideas, new projects, taking the whole family along on his entrepreneurial ventures. Suzy Menkes asked me once when we were both in Italy: “What brings you to Rome?” And I replied, “What always brings me anywhere – love.” That’s a wonderful way to move to places. As a love immigrant. The beauty of what I do is that I can take my work anywhere I want – I just need my imagination and my hands. I don’t need to be bound by a physical space.

Does your Greek heritage and identity weave its way into your designs subconsciously despite all these myriad influences?

As a young designer, you want to get as far away from your roots as possible and explore new things. My first lesson in digging deep into my Greek identity was during my Masters at the Netherlands’ Fashion Institute in Arnhem. We had to present our first ever collection with 20 pieces at Paris Couture. That was my first show and I was 22. Barney’s in New York, who wanted to buy the collection, insisted that they only wanted designs rooted in one’s heritage. I worked on it, on the fluidity – and I have come to the realization that what one sees as Greek in my work is the freedom. It is the spirit of Greece. It is the sensuality. It is the fact that I allow the fabric and the body to move freely. My Greek heritage comes up in the most unexpected ways through memories, images, dreams. I’m a big fan of architecture and geometry, the mathematics of dance, the arithmetic of music and rhythm.

You have been fiercely adamant about not being labeled a designer and would rather be described as an intuitive dressmaker. Why the distinction?

I do something that is very traditional. I don’t design, I don’t sketch, I don’t have mood boards or upload anything on a computer. .. I do couture. I work with fabric and the structure of the fabric. I have a mannequin and I drape. I was very privileged to have the best draping teacher in the world – Heroun Peters (Alexander McQueen and John Galliano were his students). I’m an intuitive dressmaker. If you see my clothes on a hanger, they look shapeless. It is the body that lends them the shape. I’m designing for bodies that live and breathe and move and have babies and cross their legs. I design imagining what the dress will look like if you move your arms, what people at the back of the table may notice, if the dress follows your movement when you walk.

Is it true that you learned your best “dress-making secrets” from your mother?

I did learn a lot just observing my mother, an extremely talented seamstress. My earliest memories are of my mother’s clients streaming into the house for fittings, and most of them invariably wanted my opinion. My mother knew that I made some pertinent observations and she encouraged me to voice my thoughts. It was the ’80s with big hair and big shoulder pads, and for me it was like an exercise to see how far I could push these conservative ladies out of their comfort zones. That was my lab. I knew, even at a very young age, that I wanted to grow up to be a fashion designer. All my pocket money went on fashion magazines. And I think being raised in small-town Greece gave me the drive to dream and escape into my own imaginary world of fashion and dresses.

In July 2011, you won first prize in the “Who Is On next?” competition for emerging fashion designers in Rome organized by AltaRoma and Vogue Italia and joined a select group of young fashion talent invited by Giorgio Armani to show in his Teatro Armani venue. You obviously share Armani’s minimalist fashion sensibilities…

It was a singular experience to show my spring/summer 2015 show hosted by Giorgio Armani at the Milan Fashion Week. It felt like entering a sacred ‘avaton’. Armani is an empire. His PR machinery is simply remarkable. For me, Armani is the perfect example of a designer who has deep values. These are the same values that I try to express in my work: femininity and pure elegance without artifice. We both share a taste for purity, but I’d rather focus on the possibilities of ingenious draping and a bias cut to build my creations. 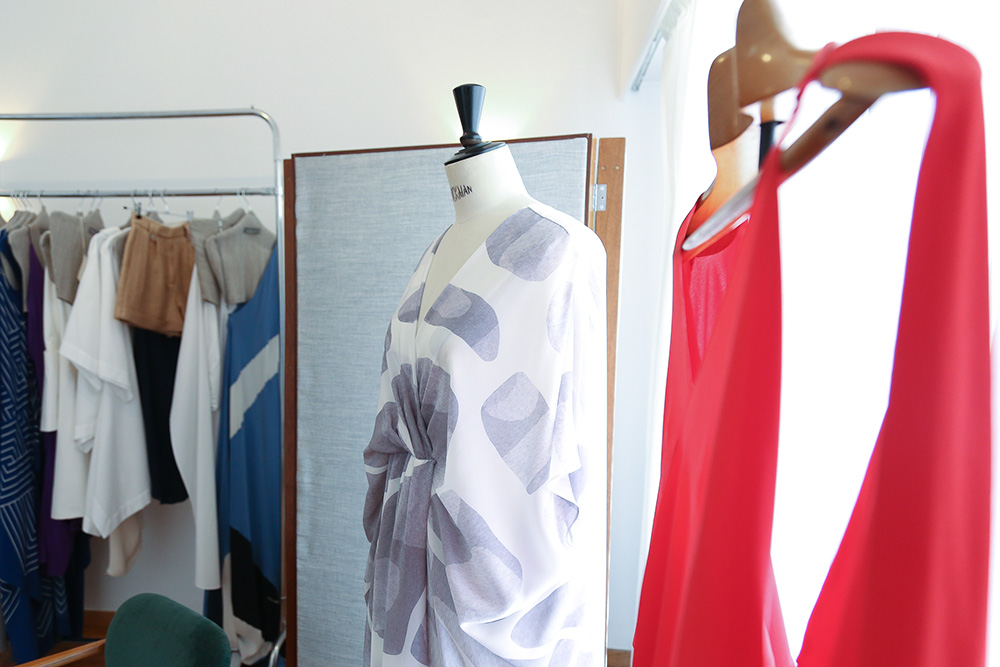 How would you describe your style?

For me, it’s a process of evolution and technique. But I’d say my style is purism, freedom, sensuality, femininity, classicism. You need to get to know my dresses. And the more you know them, the more you feel comfortable, the more they reveal themselves. There is nothing conceptual. I’m not a minimalist, I’m a purist.  My shapes are sometimes cut from a single rectangle of fabric, molded around the body with a single seam. They are fluid.

The British magazine Wallpaper tipped you as an exciting young designer to watch and labelled you a sensualist whose languid dresses reveal love and respect for the female form. What kind of pressure did that place on you?

It is very easy for a young designer to fall for the hype. You can lose your momentum temporarily until another one comes along. I’m not a young designer any more – I’ve had my brand for 15 years now. I’ve met the mightiest in the fashion business from Anna Wintour and I’ve worked with the likes of Vionnet and Cavalli … but I wouldn’t change what I do for any of them. I’m not trying to impress with technique or hype. I have grown organically, by honing my craft and investing everything into my work, despite my doubts and falls…

Greek fashion and style is having “a moment” … but does Greek culture ever really go “out of fashion” in your opinion?

The fashion scene is much more interesting than it was ten years ago. Young Greeks who travelled and studied abroad, realise that it’s fashionable to do things with your hands again. In this post-crisis world there is also new awareness that people aren’t going to pay you because you’re ‘amazing’ or because you’ve got facebook followers. You need to get your hands dirty, to communicate with people, to meet your buyers and to create a relationship with your artisans. You need to keep it real.

I’m heartened by the energy in Athens’ creative scene. Stores are popping up all over the place. Greeks were obsessed with all things European and American – it is only now that they’ve begun seeking something original, with character, something with craftsmanship.

You are all set to open your first store in Mykonos this summer. Tell us more.

There is a palpable energy in Mykonos that is hard to describe. Not surprising I guess, as you have Delos right across and the light of Apollon beaming through. People in Mykonos are restless, they cannot sleep, they go out on the beach, they fall in love, they wear their big smiles. Other islands have mellower energies. On Mykonos, you’re overpowered by this vitality and then the wind blows and you’re transported. My first collection in Milan with geometric designs and stripes was inspired by Mykonos. The story was of a girl with her lover in the Cyclades, they make love, she wears his shirt and the wind blows so hard that it is draped by the wind. Beauty happens.

And you will be launching your new menswear range at the store?

It is not really a full collection but a laboratory of ideas – high-quality, woven fabrics, comfortable but elegant, in just one size. I call the collection Après Plage. Mykonos is also the perfect place to wear my clothes; to let the wind blow through the fabric and let the sun bring out the colours. The clothes, both for men and women are democratically priced and are practical to fold and carry… because on Mykonos, you never know where you’ll end up next.

For my work, it’s “effortless” and for my life, it’s “privacy”. I also like the Japanese term “Enso” to express a moment when the mind is free to let the body create. 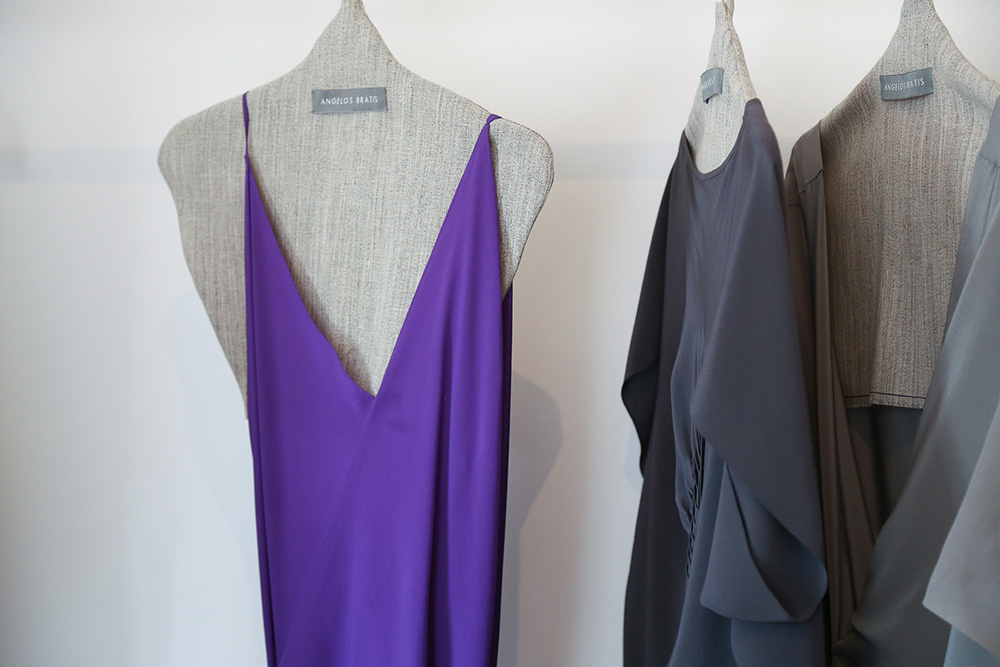 Where do you go in Athens to feel creatively inspired?

To the Benaki Museum and to the Cycladic Museum; on a stroll around the Acropolis; to Blue Bird where my friends play music on Wednesday nights or the old Galaxy bar on Stadiou.

At Ag. Irinis or even around Syntagma… you see all these skateboarders and all this dynamism… I love youth, the excitement, the freedom. The metro is a great place to observe people too, especially on a Saturday night out.

I really like the fusion-restaurant Nolan – they dared to do something different when Greeks can be quite content having souvlaki every day, which I’m guilty of too! 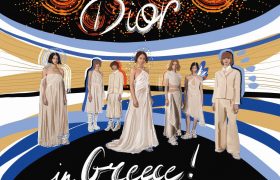 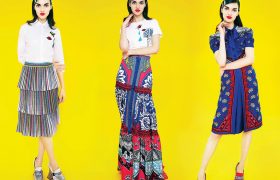 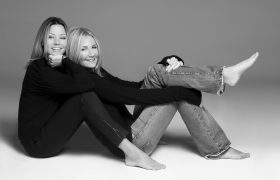 Zeus + Δione: Greek at the Seams 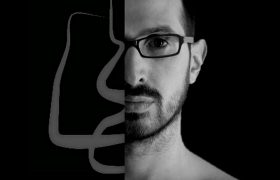 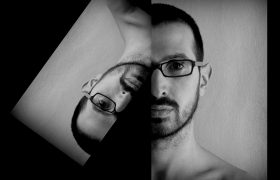