Menu
Home | Culture | A day, a night and some decades later… the birth of a museum

A day, a night and some decades later… the birth of a museum 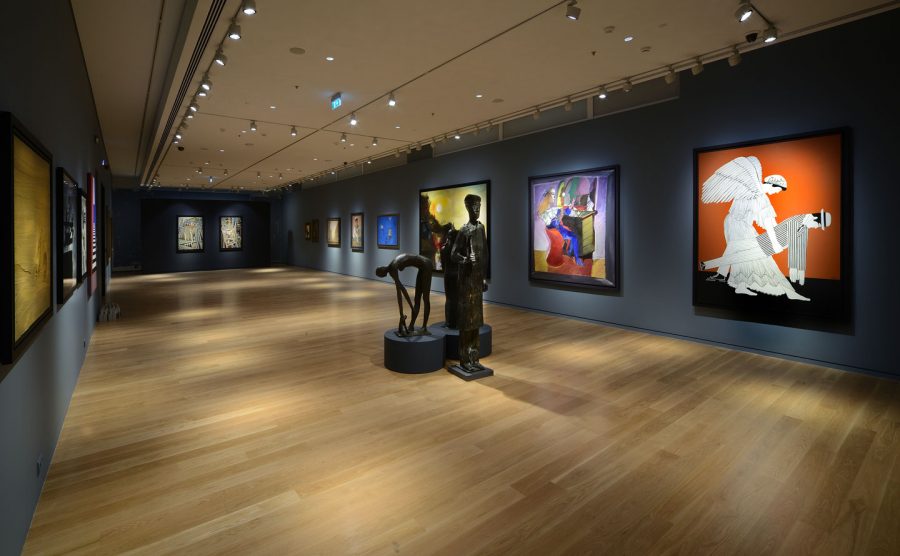 Believe all the hype surrounding the new Basil & Elise Goulandris Foundation’s Museum of Modern Art. If you haven’t visited the impressive, 11-floor space at 13 Eratosthenous Street and admired its impressive art collection – on par with museums in New York or Paris – you’d better get in line for an uplifting, aesthetic experience. Get seduced by a sensual feast of artists who defined and shaped modern art as we know it.

Love many things, for therein lies the true strength, and whosoever loves much performs much, and can accomplish much, and what is done in love is done well.
– Vincent Van Gogh

Van Gogh dreamt of painting and painted his dreams, the same could be said of Basil and Elise Goulandris, who with unwavering vision and passion spent their lifetime celebrating and collecting some of the finest contemporary and modern art masterpieces in the world, with the aspiration of sharing their splendour with their beloved Greece and more specifically, its capital Athens. 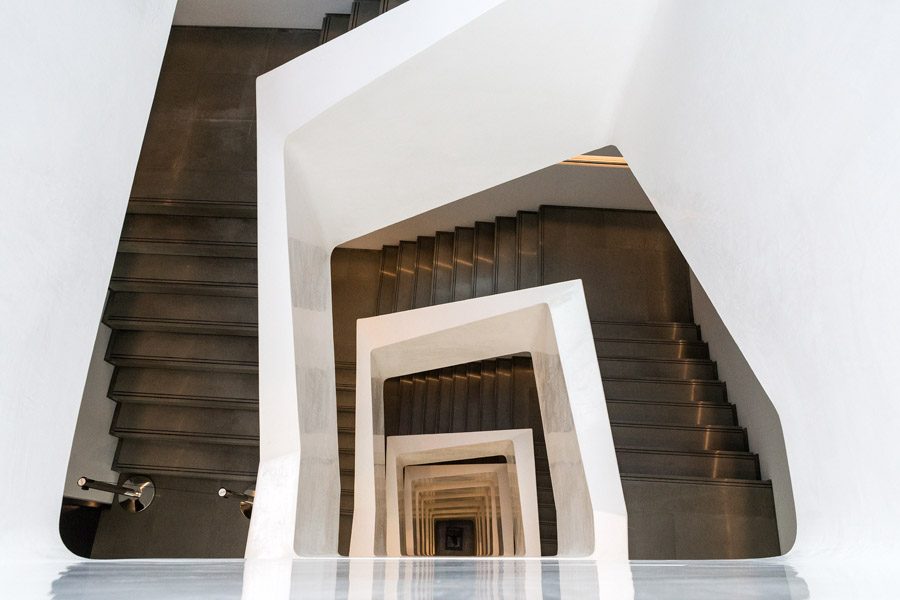 Entering the office of their niece, Fleurette Karadontis, President of the Basil and Elise Goulandris Foundation, on the top floor, the imposing view of the Athenian skyline is matched by the kindness and warm welcome one receives. This hospitable and generous sensation carries through the eleven floors of the new museum. Fleurette Karadontis is understandably thrilled that after 27 years of family differences, changing Greek governments, laws and locations and much struggle and strife later, her family’s desire is now at last a reality, as at the beginning of October, children from the local Pangrati primary school were the first visitors to scan their tickets at the stunning Basil and Elise Goulandris Foundation’s Modern Art Museum. The Greek capital – and the art education its citizens, visitors and future generations will receive – will never be the same again. 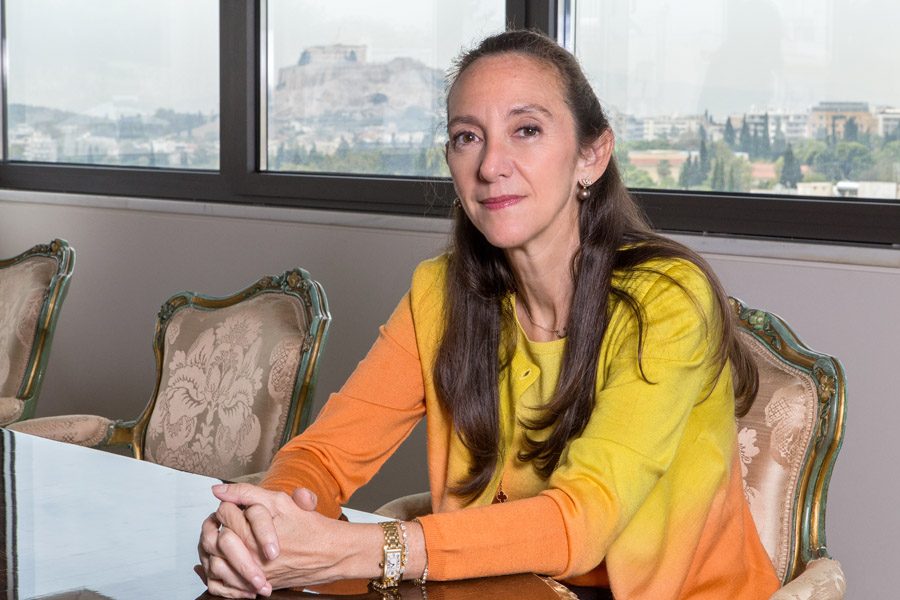 With a heartfelt smile, seated opposite a Rauschenberg painting and a multitude of leather-bound volumes safely keeping photos and decades of family memories, Mrs. Karadontis shares that her shipowner uncle Basil Goulandris and his wife Elise treated the priceless paintings as constant subjects for the adults and children in the family to discuss, comment on, live and breathe. They travelled with their Picassos and Klees, and arriving in their homes in Gstaad, Paris, London, Athens, Andros their first order of business before unpacking their bags would be to hang their travelling paintings. 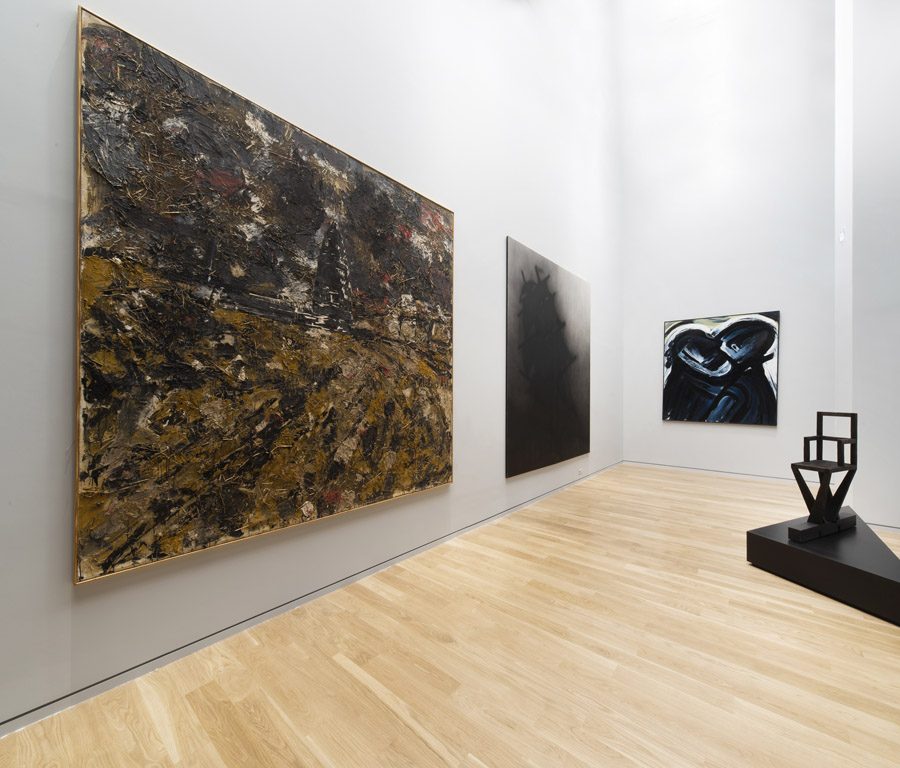 This sublime collection of over 800 masterpieces of contemporary and modern art (valued at over $3billion) was a result of their unrelenting passion for the arts and their personal and close relationships the Goulandris’ built with many of the rising artists and art collectors of their time. During their lifetime, they opened their family and friends’ hearts and minds to art, making these masterpieces part of their everyday life as a living and breathing presence and this sensation is recreated for visitors to their new and massive gift of a museum. The art isn’t there to be revered, it’s there waiting for interactions, discussions and the building of a lifelong relationship with the arts, in the same way as Basil and Elise offer a glimpse of their psyche with their collection. 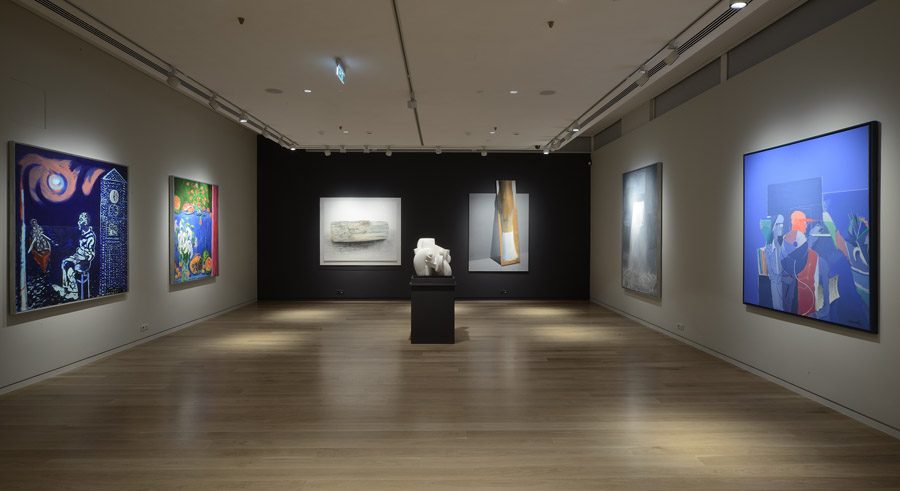 Basil and Elise’s first massive art donation, was to create Greece’s first Museum of Contemporary Arts in 1979 at Goulandris’ birthplace on Andros. Just a couple of years later, the Archaeological Museum of Andros was founded and funded by the philanthropist couple.  However, it was with their lifelong desire in 1992 to house and display, their vast modern and contemporary art collection for the public, that the real problems began. 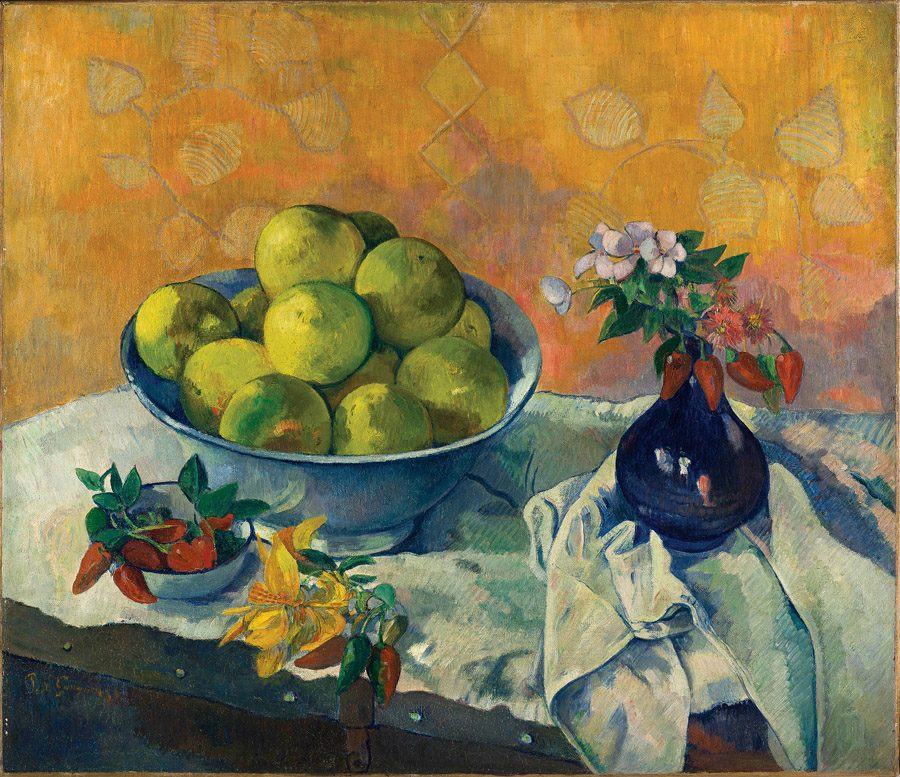 The first construction site was established on Rigillis Street in Kolonaki, but soon after work was halted for good, thanks to the discovery of Aristotle’s Lyceum. A second site at Rizari Park was later rejected due to residents’ objections. When the current location on Eratosthenous Street was found in 2009, this time it was underground water that significantly slowed down progress. However, the Foundation’s President cites the Greek proverb of ‘every obstacle is for the best’ as the original sites would have hosted an I.M Pei designed building, which would have been an architectural gem for Athens but the running costs would have been sky-high. Instead, their vast patience and perseverance paid off as is evident in the stunning building in the Athenian neighbourhood of Pangrati that will benefit from this most classic and modern of cultural hubs.

Already popular with tourists and Airbnbers thanks to its proximity to the Panathenaic stadium and its bohemian vibe, Eratosthenous Street is witnessing an overnight gentrification thanks to the museum. The neighbouring and imposing St. Spyridonas church now also has a LED illuminated square with park benches and water fountains for humans and pets! 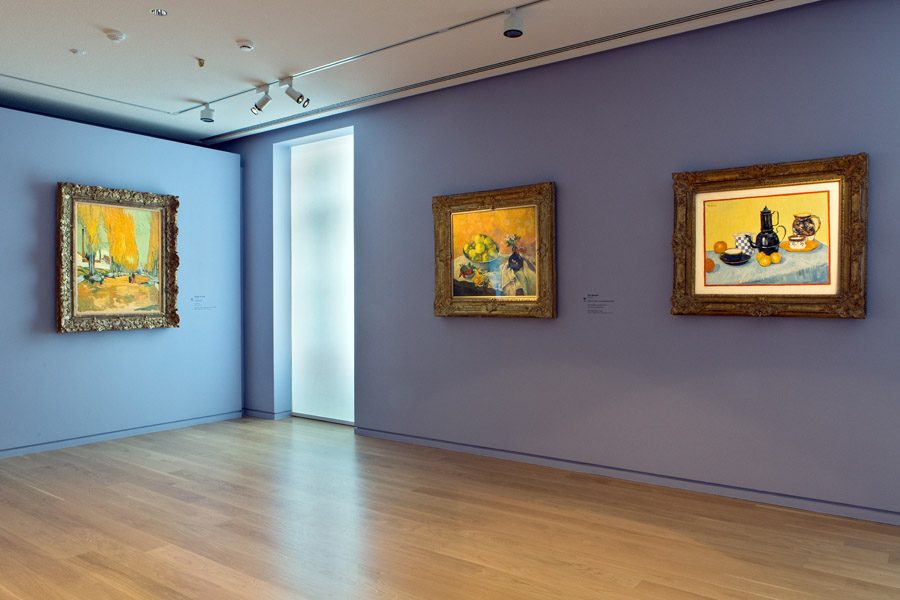 Unfortunately, the various obstacles weren’t resolved before Mr. Goulandris passed away in 1994, followed by his beloved wife in 2000.The El Grecos, Monets, Kandinskys, Bacons, Braques, Warhols and Degas gathered dust in storage for years, their voices muted by human frailty and thorny issues. There is certainly a sadness that they passed away before they could revel at the opening night of their great cultural gift to Athens, but the moving Chagall portrait of Elise, is the first welcome one receives when entering the museum and their dream is propelled into the future by the next generation – their nephew Kyriakos Koutsomallis along with their niece Fleurette Karadontis.

The aim of the museum is for it to be a hub for education, expression and cultural communication for both the locals and the masses of tourists that will be flocking to pay up close and personal homage to this incredible art collection. This won’t be a stuffy and exclusionary space; instead the 7,250 square meters, 11-floor venue will be a liberal and inclusive realm that will host regular, free workshops for kids and adults, readings in a stunning light-filled library with over 6000 of Basil and Elises’ personal art books, events in the restaurant run by the Ohh Boy team, the state of the art amphitheatre and the small recording studio. 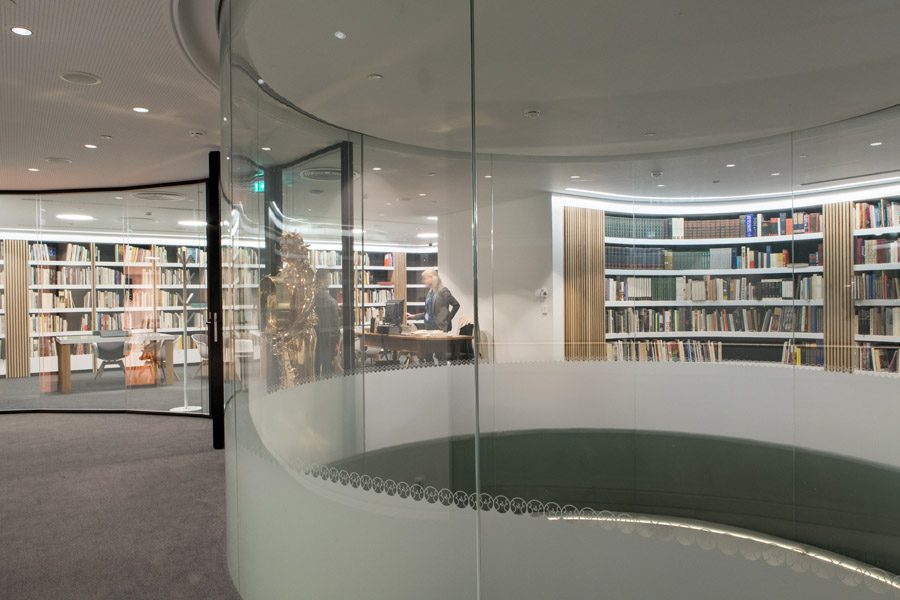 Mrs. Karadontis hopes that visitors will come again and again, so as not to miss the many narratives this collection has to share. The works from the vast collection will be rotated often and there will be future visiting exhibitions too. The intention is to make the visitor comfortable enough to want to share the experience with their children and to foster a real closeness with the arts. Her favourite painting in the collection is Van Gogh’s ‘La Cueillette des Olives’ – ‘Olive Picking’ from 1889, as it changes dramatically with the light.

The Greeks are of course known for their dramas and tragedies, but there is also an eternal perseverance and hope that is evinced by the B&E Goulandris Foundation too. Art lovers from around the world can now marvel at a breathtakingly gorgeous space that showcases a collection featuring many of the masters: Cezanne, Van Goth, Gauguin, Monet, Degas, Rodin, Toulouse-Lautrec, Bonnard, Picasso, Leger, Miro, Braque, Giacometti, Lichtenstein Balthus, El Greco as well as their Greek counterparts: Parthenis, Vassiliou, Hadjikyriakos-Ghika, Moralis, Tetsis and Bouzianis. These greats are all in the spotlight, in the Hall of the Masters, where they gaze stoically at one another as if conversing and sharing their tales of inspiration, voyages and artistic genius. These masterpieces now share the same air, not in Paris or Rome or New York but in Athens. One senses that they are at peace, in their new home, adjacent to the Panathenaic stadium and a just a stroll away from the majesty of the Acropolis that casts its golden shadow over a city whose heart is now pulsating more artistically than ever before.

“I feel that there is nothing more truly artistic than to love people.”
– Vincent Van Gogh.

6 Reasons to visit the Goulandris Museum