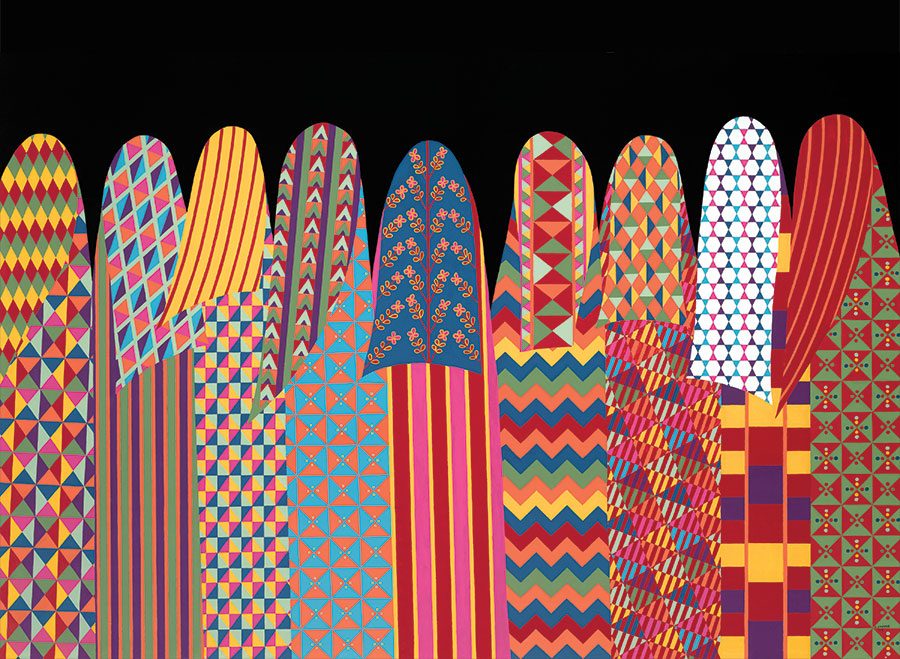 Women against the night

Washington-based Lebanese artist Helen Zughaib’s recent exhibition at the Tsichritzis Gallery (as part of FAME, Female Artists from the Middle East) captures the geometry, colour, and the blinding light of the Middle East. Her powerful narrative on women and displacement touched President Obama so much that he chose her artworks to gift to visiting Heads of State. In an exclusive interview with Sudha Nair-Iliades, she confides, “It was difficult to escape both the beauty and the chaos of growing up in the Arab world.” 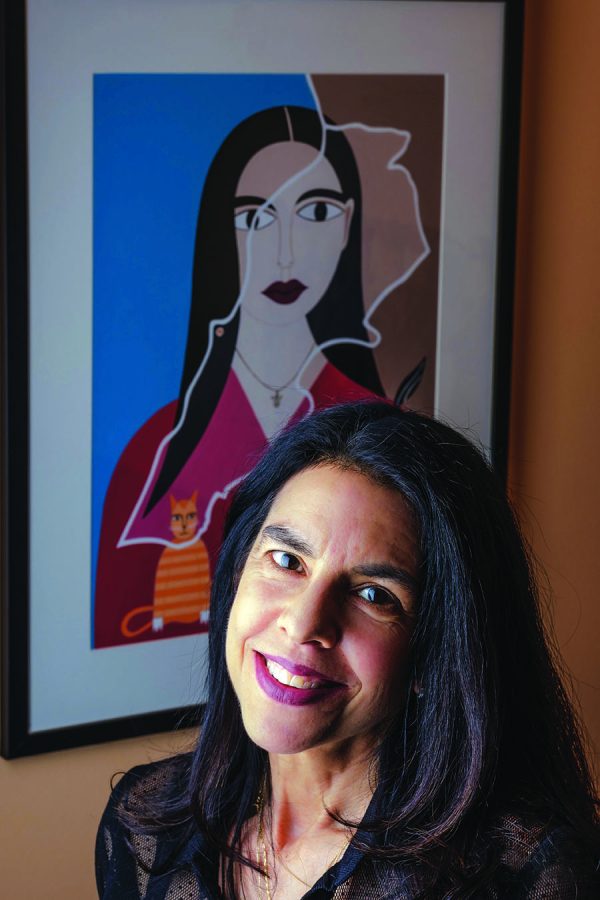 Helen Zughaib and her self portrait by Basil Kiwan

You spent a few years growing up in Athens and Paris, in between your childhood in Lebanon, and before moving to the US? How do you identify yourself?

Yes, I did. Due to the civil war in Lebanon, my mother and two of my sisters and I, were evacuated to Athens. My father remained in Beirut. It was a very sad and difficult time for our family as we did not have much communication with our father during that time. Remember, no email, no whatsapp, no cell phone..we relied on periodic letters brought to Athens from Beirut. Finally, we all moved to Paris where I completed my secondary school. I remember my art professor reviewed my portfolio for entrance to study art at Syracuse University,on a bench at the Louvre museum! It took me years to appreciate that amazing moment! How do I identify myself? I am an Arab-American. Or Lebanese American, but in general, people identify me as Arab-American. I am proud of both sides.

Your art underlines the narrative of displacement. You have often spoken about your own ‘truncated’ childhood and your sense of being uprooted. How special is it for you to exhibit in Greece, a country that was once home to you, and has now been the temporary home to thousands of refugees from Syria and Iraq?

Your question underlines the circles of life. Having to leave twice before, once during a coup in Iraq, again in the Six Day War from Lebanon, and the third time, during the Lebanese Civil War, I know what it means to run away from everything, everyone, you love. Time stops, truncated as you say. So harshly, but then moves at light speed towards the next place, country, environment. Almost no chance to breathe or reflect. This amazing opportunity to be in Athens once again, after all these years, to participate in this show, Women of Resilience, with other amazing female artists of the Middle East, is a dream. It is indeed incredibly special to have my work, that centers around the refugee crises from Syria and Iraq on view at this time in history, in Greece. I wish that they could know that I have not forgotten them. That I continue to speak for them through my art. I want to be their voice so the world does not forget, does not repeat this devastating chapter in history again.

I actually do not think of myself as political! I reflect what is happening around me. I try my best to visually document what is going on in the world.. I think of myself more as a humanist. Ultimately I am interested in humanity and what happens to people after war and displacement. In general, I think art should speak to our times, whatever that may be, in a way, to preserve those moments in time for future generations to know what was going on in our history.

You consider art to be one of the most important tools to foster dialogue and understanding and between the Western world. Do you think that art plays a significant role in this conversation, especially in the populist, nationalist times we live in? To be truly meaningful, should art always take a political stand?

I really do think art is about the most important tool we have to bridge our “divides.” Not just visual art, but music, poetry and performance art. I truly think art changes the way we see one another. It lets in a bit of light so we can begin to see one another and realize there are fewer differences amongst us than we may have thought previously. It somehow changes the conversation, it gets to the heart of the issues, the politics at hand, the divisions, it humanizes us and brings us closer together, even if it is an inch at a time. Like I said, allowing a ray of light to peek through the shouting and screaming politics. 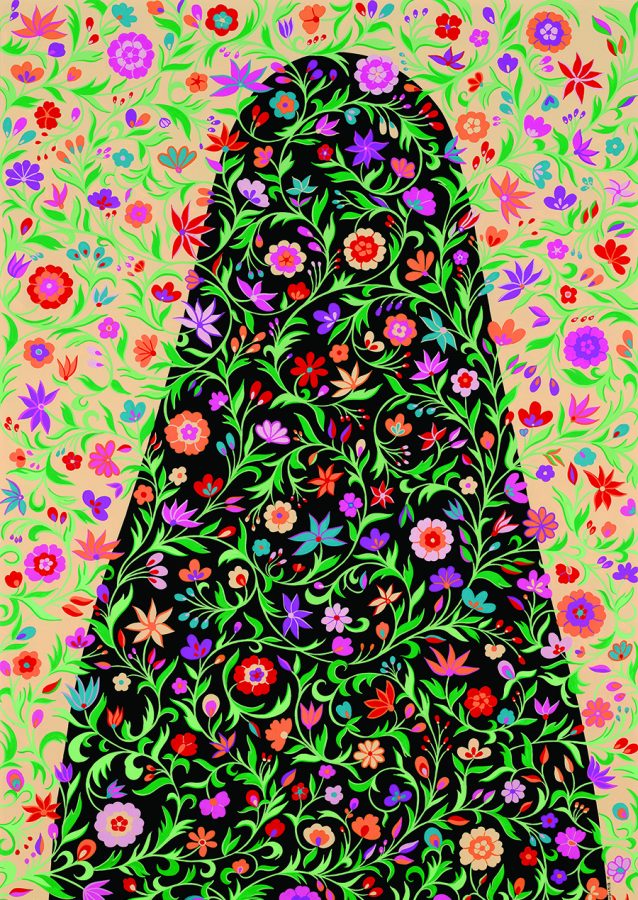 Your artwork focuses extensively on Arabic women and their rich heritage. Do you identify yourself as a feminist? Is there a subliminal message you’d like your artworks to evoke? What encourages you about recent changes in the Arab world?

Well yes, I suppose I do, but as I said earlier, I think of myself more as a “humanist.” I am interested in telling stories about people. I am interested in providing another way to look at the world through my work. I do try to create a beautiful, thought-provoking piece, that grabs your attention. Then after I get you to move in closer to my painting or installation, I can get my message across. I have been painting about incredible sadness, desperation and survival in my work for the past nine years, but I do this through beauty, color and pattern, trying to capture the dignity and perseverance of people, especially women, who often times are left to pick up the pieces of their shattered lives. I think what encourages me is just that. The incredible strength of women, who manage to survive, work to feed their families, provide shelter, and somehow continue on. They are remarkable.

Your exhibition in Greece as part of Fame (Female artists from the Middle East) comes at a time when Middle Eastern Art is finally having a moment. Have you noticed more of an interest from galleries and collectors in your art?

FAME, or Female Artists of the Middle East, founded by curator Christiana Jabara, and exhibited at the Tsichritzis Art Foundation, is hosting our exhibition. From the opening night and attendance of hundreds of people, to the conversations we had, the interest our work sparked and the subsequent talks we had the next day, expressing our intentions as artists and what we hoped to achieve, I definitely feel as if there is greater focus on what we have to say. Not just about war and displacement, but domestic issues, our place in society, the challenges we face, specifically as female artists from the Arab world. It was empowering to be amongst my fellow artists, I think there was a special solidarity we felt. For me, regarding collectors and interest, yes. The Library of Congress, recently acquired a painting from my latest series, Syrian Migration Series. This is the highest validation and encourages my continuing focus on this global issue of massive displacement and war, continuing to tell stories of people so easily forgotten, once they are not on the front pages of newspapers.

I absolutely follow what is happening in the Middle East. And definitely watching the protests in Lebanon from the news as well as firsthand accounts from family and friends living there. I hope the unity and solidarity being expressed on the streets, remains, when the protests come to an end. I hope the protests remain peaceful. 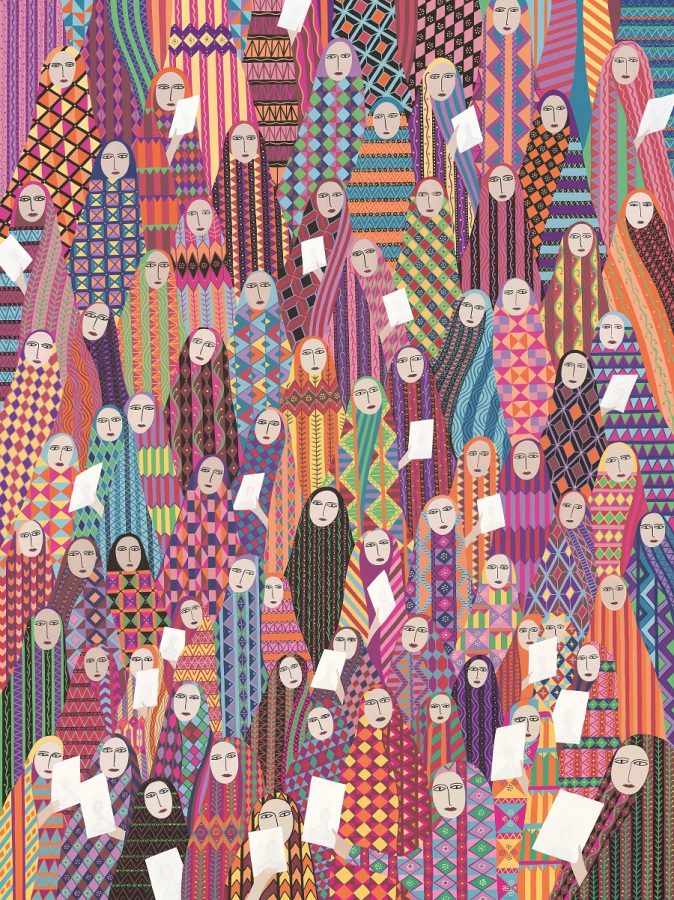 Your artworks were chosen by President Obama and Secretary of State Clinton as gifts to visiting Heads of State. Was it validation of your belief that culture trumps divisive politics and that soft power is more effective in breaking barriers?

It was so exciting for me to have had both those high honours! To represent this country as an Arab-American at a time in our world when there was so much backlash against Arabs and Arab-Americans. Such proud moments for me thinking that my work was respected enough to be given as a gift to a visiting head of state, knowing my paintings were held in high esteem, enough to express that validation of art trumping politics. The pieces chosen were peaceful and inclusive, definitely representing unity and strength as opposed to division.

Name a couple of young, up-and-coming talents you’re excited about.

Lamia Abukhadra, a Palestinian-American artist based out of Minneapolis, Zeinab Saab, a Lebanese-American, based in Illinois.

What future projects are you excited about?

Quite recently, Cune Press, published my book, Stories My Father Told Me. This is a book about my father’s childhood and young adulthood in Damascus and Lebanon before immigrating to America. I have painted each of his 24 stories and memories, capturing typical family traditions, and village life, that are easily forgotten in this fast paced world, of a time that somehow seems sweeter and more gentle. If anything, it provides lessons to the next generations of a time that we should not forget, but remember to bring forward to our children and grandchildren. I continue to work on issues regarding displacement and the ongoing refugee crisis, in preparation for upcoming solo exhibitions in both Baltimore and Washington, DC.

Helen Zughaib’s paintings were exhibited at the Tsichritzis Gallery as part of the ‘Women of Resilience’ exhibition organised by FAME (Female Artists from the Middle East) and the Lebanese Embassy in Greece. Founded by the dynamic Christiana Jabara, FAME empowers female artists of the region and give them exposure and a voice internationally. The exhibition ‘Women of Resilience’ deals with how artists view themes of displacement, migration, identity, war and an unstable socio-political climate but who  ave also succeeded with a message of hope, dialogue and strength, linking where they come from, and where they are now, into a story.

A day, a night and some decades later… the birth of a museum