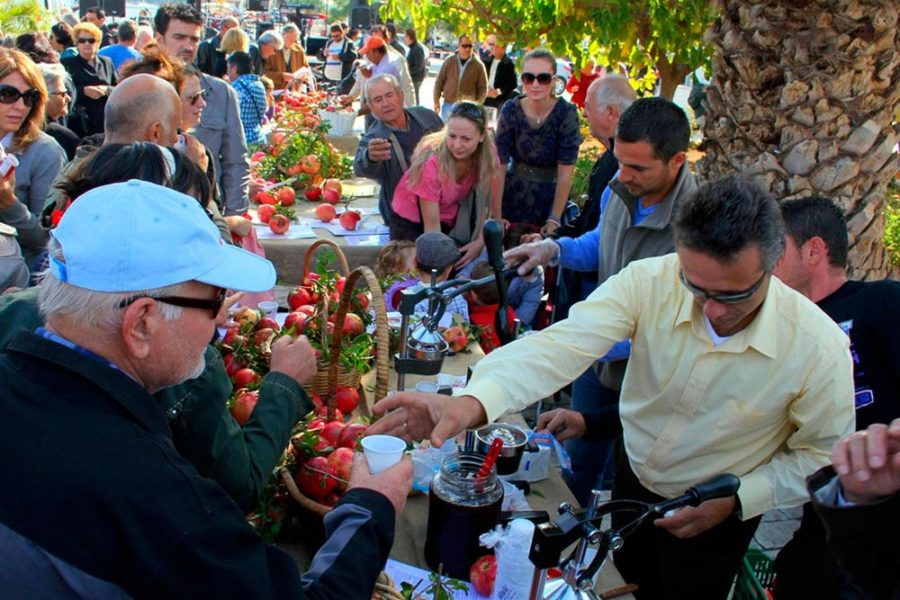 Greeks will find just about any excuse to throw a party.  Especially in the fertile harvest months of Autumn when Nature’s bounty overflows and – life-affirming celebrations abound to honour the traditional delicacies that have shaped the local character and flavours of villages, towns and islands all over Greece. Experience the wonderful Greek Epicurean spirit in its purest form…at one of these vibrant culinary fall festivals.

WHEN: From late August until late September.

WHAT: The first pistachio trees were introduced to the Saronic Gulf island of Aegina around the end of the 19th century. Over the following decades, its cultivation became so popular that most of the island’s arable land was covered by pistachio orchards, making the small nut Aegina’s trademark (in 1994, “fistiki Aeginis” earned a PDO – Protected Designation of Origin – status). Locals have developed a particular roasting technique, which is handed down from generation to generation. The unique taste of the Aegina pistachio is owed partly to the warm and dry climate and proximity to the sea.

The “Aegina Fistiki Fest” has now evolved into a major cultural and commercial event in the Saronic, drawing more than 30,000 visitors each year. Most events take place around the port. As a highlight, renowned chefs cook various dishes in an open space and share them with festival goers, while the exhibition’s official theatrical opening re-enacts the island’s history and culture. Fun Fact: In 2011, Aegina entered the Guinness World Records with a 40-metre long pasteli bar made with local pistachio.

WHAT: The pomegranate tree, an eternal symbol of fertility praised by Nobel Prize-winning poet Odysseas Elytis, is the protagonist of this festival which takes place in late October in the coastal town of Ermioni. Ermioni traditionally grows a special pomegranate variety, distinguished by its sweet taste and soft seeds. During the Sunday festival, the Limani area is turned into a display of fine foods and drinks made with pomegranates and presented by local taverna and bakery owners.  Potted pomegranate trees and music create the ambiance of a small colourful carnival, buzzing with people in celebration of this ancient fruit, which has been grown around Ermioni for centuries.

EAT: Marmelade of Ermioni pomegranate. Made with pomegranate juice and seeds, sugar and lemon.

WHEN: Mid or late September.

WHAT: Elassona’s renowned feta cheese (PDO) is the star of this three-day festival, where you’ll see traditional local cheesemaking techniques skilfully combined with modern methods. Over 30 cheesemakers from Thessaly – one of the country’s most important dairy-producing regions – take part in the lively food festival which attracts visitors from all over Greece and also helps to promote feta in the European and international markets. There are art and cultural events such as concerts and games for children. But the most popular ritual takes place on the morning of the last day when dozens of local women pull out their rolling pins and publicly prepare hundreds of coiled cheese pies to bake and then share with hungry onlookers. At the festival’s evening finale, dozens of lambs and goats are roasted and served on wax paper, giving visitors the chance to taste the famous lamb and goat meat of Elassona (both also PDO products).

DRINK: Rapsani dry wine (PDO) from the vineyards around the village of Rapsani in the neighbouring municipality of Tempi.

WHEN: Late October or early November.

WHAT: Mushroom lovers come together each year in the town of Grevena, the “mushroom capital of the Balkans”, and its surrounding charming villages, where more than 3,000 different mushroom species can be found growing alongside the footpaths of the massive Pindos mountain range and the nearby Valia Kalda National Park. Collecting them is a favourite pastime for locals and visitors. At the three-day fair you’ll have the chance to enjoy time in unspoiled nature while expanding your knowledge on mushrooms through workshops and seminars, mushroom-picking hikes and, of course, through tasting various delicious mushroom-based recipes. There are organized mushroom hunting tours led by experienced mushroom hunters who will accompany you to the forests to collect king bolete mushrooms, one of the local species, as well as truffles.

Raki and Tskikoudia Festivals in Crete

WHEN: Between mid-October and mid-November.

WHAT: Raki or Tsikoudia (they are essentially the same) is the spirit of genuine Cretan tradition, the quintessential element of Cretan culture. Clear, fragrant and potent, it is enjoyed in small shot glasses and encompasses all the warmth of Cretan hospitality. An essential constituent of Cretans’ daily life, it can be found in every house and is enjoyed on all occasions and at all times of the day, bringing people together, fuelling conversations – and above all, sparking revelries with impromptu mantinades, melodies and robust Cretan dancing. Each year, after the harvest, pressing and making of the fresh wine, it is the time to produce the distinctive beverage in a process called kazanema. These kazanemata (also known as rakokazana) are spirited celebrations of tsikoudia and take place all over Crete, both as organized events in public spaces (the Dance Society of Chania “Psiloritis” throws one such fete in mid-October at the Venetian Harbour of Chania) and in private homes.  The traditional goal of a “proper Cretan kazanema” is two-fold: to celebrate the good health of the distiller and to exorcise the fear of death.

EAT: Common Cretan rakomezedes are fresh fruit and nuts, including walnuts, pomegranates, apples and quinces. Roasted chestnuts and corn on the cob. Hohlioi boubouristoi – snails cooked in a skillet with olive oil, vinegar and rosemary. Kalitsounia or lychnarakia. Small tart-like sweets filled with fresh unsalted mizithra cheese, sugar, vanilla and egg and basted before baking with egg, water and cinnamon.

WHEN: Every second weekend in October.

WHAT: An annual celebration of the juicy green apples cultivated in the area has been hosted in the picturesque village of Arsenio (about a 90 minute drive west of Thessaloniki) since 1985.

With much zeal and enthusiasm, locals put on a two-day feast that’s dominated by the scent and taste of the green apple. The women prepare both sweet and savoury delicacies using as a basis the white-fleshed fruit with the slightly sour taste. Long tables are set up outdoors and all locals and visitors are invited to join the feast. Entertainment is provided by local musicians, while traditionally-attired dance groups perform dances from Macedonia, Thrace and Pontos.

DRINK: Apple liqueur. Apples are cut in slices and preserved for a month in a lidded jar of vodka, brandy, cinnamon stick and cloves.

WHEN: Every second Sunday of October.

WHAT: October is the month to harvest walnuts and the people of Rhodes celebrate each year with a feast accompanied by singing and dancing. The walnut worship takes place in Dimylia, a charming village surrounded by lush vegetation at the centre of the island. You can taste sweet homemade delicacies containing walnut such as baklava, walnut pie, takakia, diples, walnut preserve or liqueur, all made with fresh locally-sourced ingredients and great enthusiasm by the Thodian women. Be entertained by local folk musicians playing nisiotika (the distinctive music created in the islands of the central Aegean Sea) who come from all over the island.

EAT: Takakia. Small rolls of homemade pastry filled with walnuts, ground nutmeg, cinnamon and clove and sugar. After baking they are doused with a honey syrup and sprinkled with sesame seeds, cinnamon and ground clove.

Mantinades. Crispy pouches made with thin strips of fried handmade dough dunked in a honey and blossom water syrup and sprinkled with ground almond and walnut.   Mantinades are traditionally made on the feast day of St. Andreas (November 30) in Lindos and other Rhodian villages by girls who are engaged to be married, who offer them to their grooms and best men.

Where Athens’ Aesthetes go to Drink