Susanna Hoffman traces Greece’s 6000 year-long love affair with honey and the evolution of the Greek honey industry to include a whole range of apiary offerings from royal jelly, propolis, bees’ pollen and extended product lines that cover the gamut from sauces to soaps, all enriched with Greek honey. 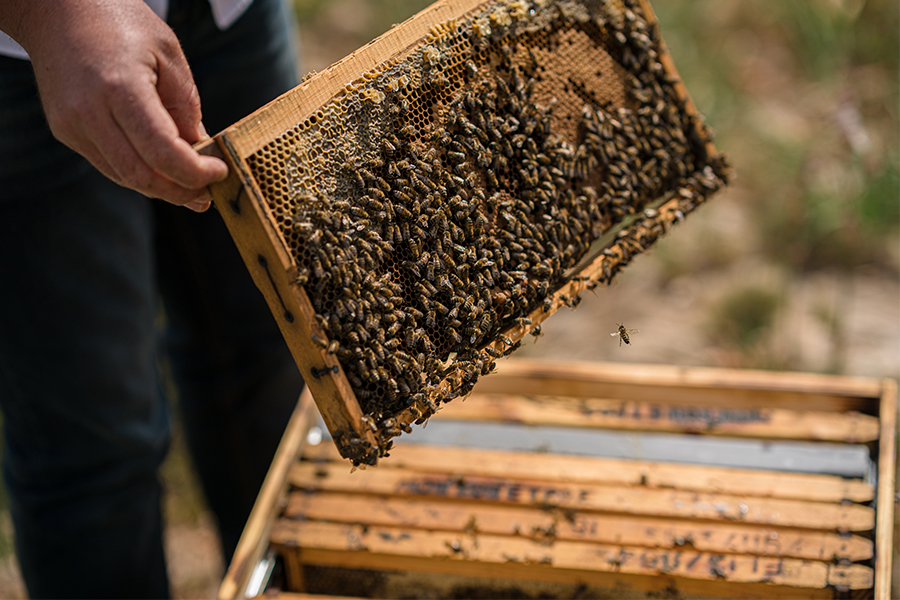 Greece has approximately 25,000 beekeepers and over a million hives ©Nikos Karanikolas

Far earlier than olive oil, long before wine, Greeks fell in love with honey. It is a love affair that has lasted for 6,000 years. From ancient times today Greek have produced some of the best honey in the world. To taste Greek honey, whether from Crete, the Peloponnese, Thassos, Epiros, any of a thousand islands, or from, historically at least, the most praised site of all, Mount Hymettos in Attica, is to fall into that same adulation. In the modern world, Greek honey continues to enjoy the same high regard as it always has.

There are approximately 25,000 beekeepers in Greece and about 1.3 million hives. Despite the density of hives –one sees them all over the countryside- production is relatively limited. Figures vary depending on the source, bout production is fairly stable from year to year, at about 10,000 to 12,000 tons. The quality of Greek honey, however, remains as stunning today as it has been throughout time. There is good reason: Greece’s countryside continues to yield an unrivaled variety of vegetation with the attendant of pollens. Most of the plants from which Greek bees gather are wild, sun-baked until their flavors and tints maximize. (In most other honey-producing countries, bees feed off cultivated monocultures.) Greek honey also undergoes a minimum or processing therefore retaining all the nutrients, flavor, and texture dictated by nature. 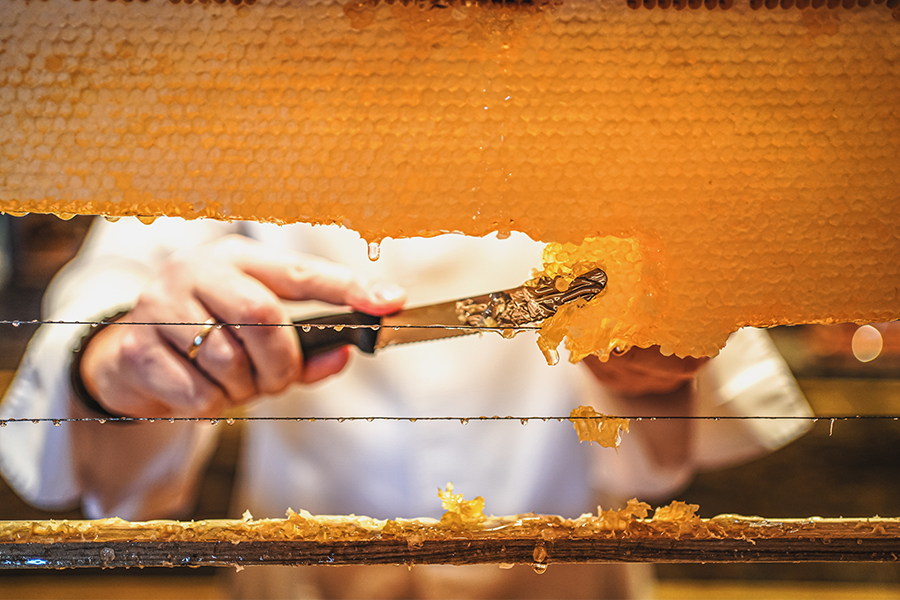 Honey takes its name from what bees feed off. Hence thyme honey, blossom honey, pine honey, orange-blossom honey, chestnut honey, etc. Beekeepers move their hives from place to place, slope to slope, field to field, in order to reap the rewards of the season and provide fodder for their hives. The sea- son begins in March and ends around November in the southern- most parts of Greece. In May, when orange trees bloom, bees are taken to feed off their inebriating flowers. July is the season for thyme honey: September for pine; and May and September for heather, which blossoms twice. As a general rule, the honey is harvested right after the feeding period to ensure the best flavor. In the incredibly rich and varied Greek flora, there are at least 120 different flowering plants and trees that provide fodder for Greek bees, and theoretically just as many different types of honey, but only a handful are commercially viable. Among them: dark, thick pine and fir honey, orange-blossom and flower-blossom honey, heather, and, of course, arguably the best- known of all, thyme honey. Thyme honey is unique to Greece, although more than 60 percent of Greek honey comes from pine. There is one Greek honey that has been awarded Protected Designation of Origin (PDO) status, the light-colored, pearly-textured fir honey from Vytina in the Peloponnese. About 80 percent, comes from bees that forage off wild, not cultivated, plants.

Some of the more obscure and unusual honeys, such chestnut, sage, and heather, are appreciated by connoisseurs. There is even a range of “bitter” honeys, harvested from bees that have been allowed to feed on the ubiquitous arbitus berry, a relative of the strawberry. Since the color of the honey comes from plant pigments, and those in Greece are strikingly deep, the hues of Greek honey are darker than elsewhere, ranging from caramel to brandy to almost cordovan. Even blossom honey, usually pale, looks like liquid butterscotch. 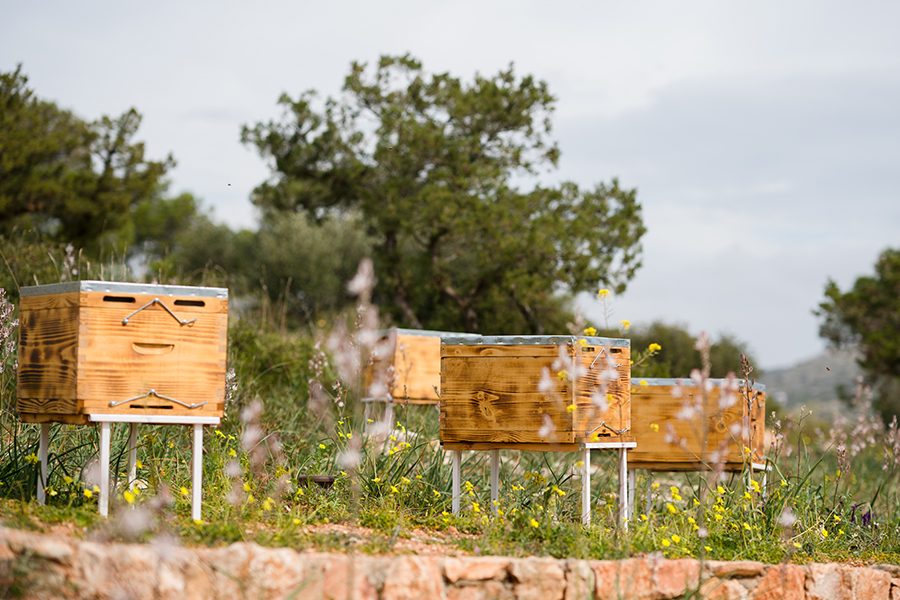 Greek honey is available in markets and shops worldwide. The Greek honey industry has evolved to include a whole range of apiary offerings, honey bejeweled with walnuts and almonds (a favorite winter snack), to royal jelly, propolis, bees’ pollen and extended product lines that cover the gamut from sauces to soaps, all enriched with Greek honey. The hunt for sweetness is perhaps people’s most ardent, but with Greek honey it is gloriously solved. Greek honey invites everyone who tastes it into the love affair that Greeks have forever relished.

HONEY IN THE KITCHEN 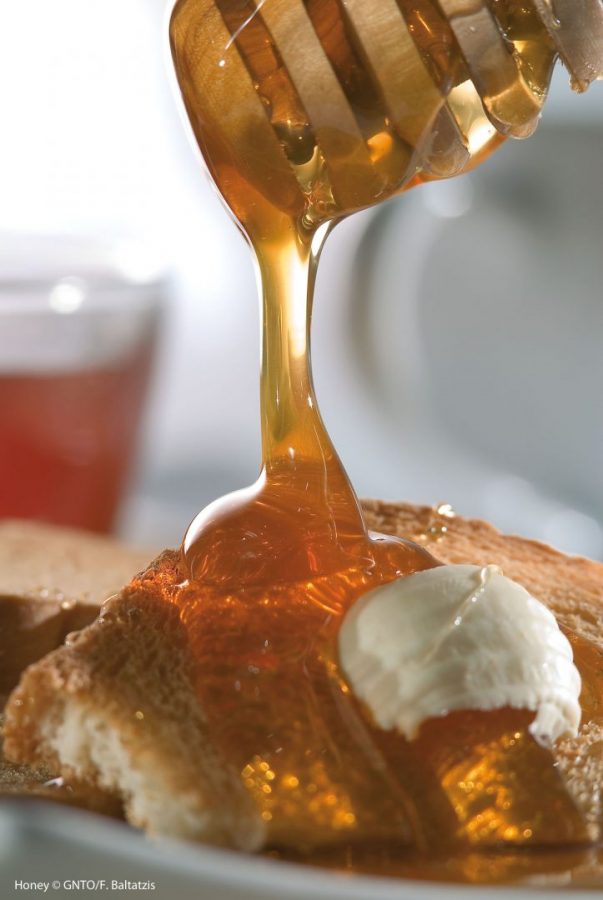 Along with sweetness it bequeaths the savor of the original flowers, herbs, and even trees. Greek cooks well recognize this, which is why honey still plays a major role in Greek cuisine. Contemporary chefs mix it with raisin vinegar and orange juice and use it as a sauce for everything from seafoods to salads.

Early Greeks very quickly began to lure bees away from logs and crevices in the wild into man-made habitats. With the bee ensnared, they realized they no longer had to forage for honey; they could plunder it at will. Historians thought that Greeks learned the trick of beekeeping from the Egyptians, but there was no need. The industrious people already living in Greece, the Minoans, well knew how to harbor bees. One of the most beautiful pieces of Minoan gold jewelry ever recovered pendant showing two bees sucking on a drop of honey, and an intact beehive was found in Akrotiri, the Minoan city destroyed around 1623 BC More tellingly, one of the Minoan’s most important goddesses was called “Keeper of the Animals” and also “Queen of the Bees.” Echoing that, in the later Greek pantheon, Artemis, the goddess most associated with animals, had the bee as her symbol. The first beehives the Greeks manufactured replicated the sort of burrow bees swarm to in nature. Soon, however, they began to make hives of hollowed out mud, and shortly after, dome-shaped ones of clay. Very early, by about 800 BC, Greek beekeepers came up with a stunning innovation, one that is essentially still used around the world today: they developed hives that contained removable bars to hold numerous honeycombs. With the bars, single combs and their store of golden liquid could be extracted, leaving others behind for later gleaning. The bars with their separate honeycombs could also be used to start new hives. With this innovation, beekeeping so rapidly proliferated in Greece that regulations had to be enacted to restrict overstocking. Even the great lawmaker Solon in the sixth century BC had to enter the fray of bee regulation. Either to limit the exploitation of Greece’s potent, but delicate, flora, or to stop beekeeping battles, he stated that no new apiaries could be established within a distance of three hundred yards of a previous one. Because it was such a revered item, so mysteriously sweet and golden, honey also figured as a sacred substance to the Greeks. The great god Zeus was suckled on honey by the nymph Melissa, whose name means “she who makes honey.” Eros, the god of love, dipped his arrows in honey before shooting them into unsuspecting humans and sometimes fellow gods. The priestesses of Demeter, Artemis, and Rhea were the “honied ones’’ 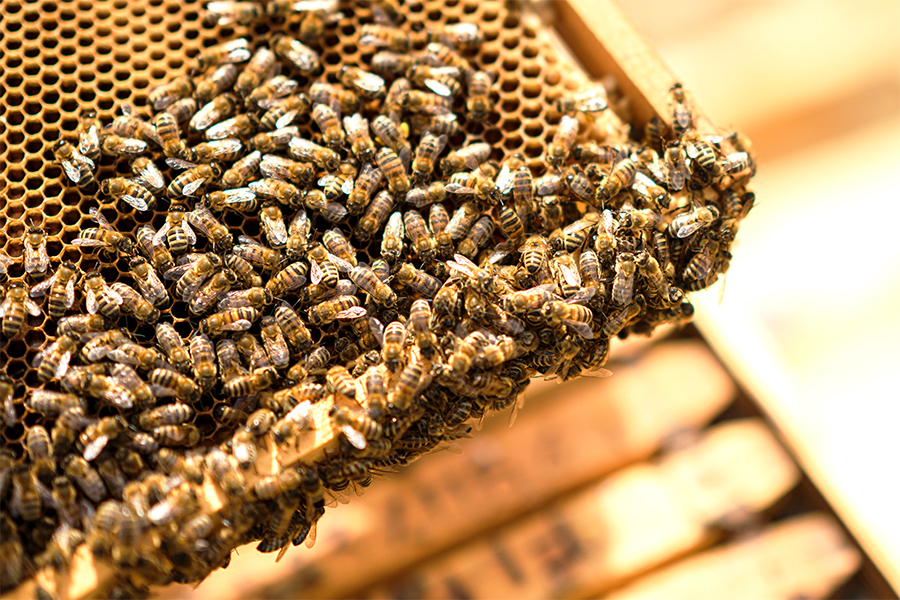 Close-up of a bee-hive ©Nikos Karanikolas

As now, Greek honey was produced in such varieties and quality, there were numerous grades of it, and it, like wine, was rated according to place of origin and specific characteristics. Aristotle and Theophrastos declared Attica honey the best, especially the honey from Mount Hymettos, followed by that from Salamis, Leros, Kalymna, and Hybla in Greek Sicily. The renowned food writer, Archestratos, also waxed lyrical over Attica honey, especially over the cakes soaked in it sold in the Athens market. Skillful honey agents traveled about to procure the best honey, for as well as for food, honey was used as a trade good, to stave off invading soldiers, to comprise dowries, coat cheese, polish metal, and as an undercoat for murals.

Susanna Hoffman is an anthropologist and the author of The Olive and The Caper: Adventures in Greek Cooking.