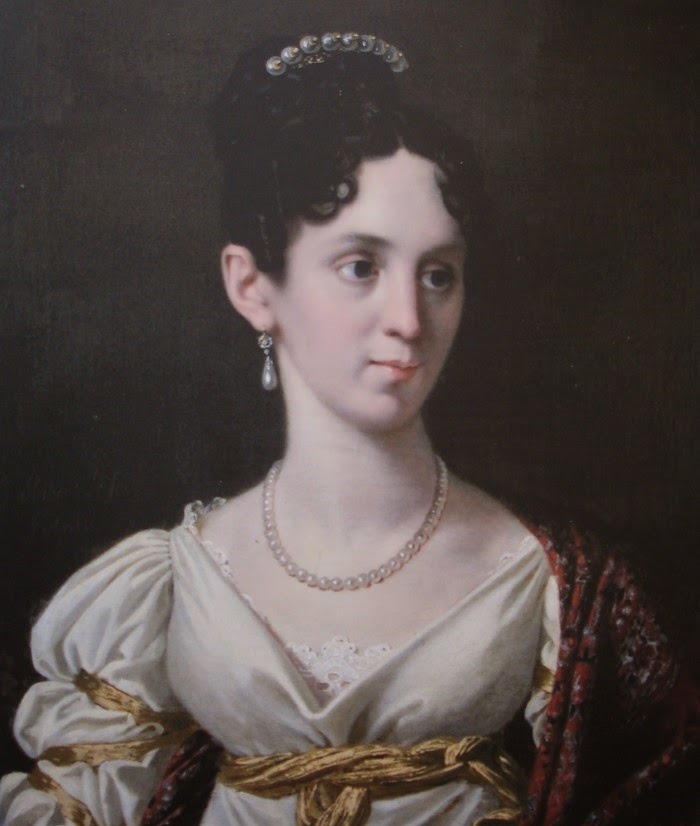 Glamorous socialite, political powerbroker, commissioner of grandiose palaces, grieving mother and champion of women’s education. The Duchess of Plaisance was no ordinary expat. Discover how this intriguing single female from Philadelphia came to wield such great power and influence over 19th century Athens, and find out where you can still see her footprints on the Athens of today.

She was one of the most influential figures during the Greek War of Independence; the woman who commissioned some of Athens’ finest architectural landmarks including the Byzantine and Christian  Museum and the Castle of Rododaphni; urban legends of her temper and her deadly pack of Great Pyrénées who mauled passers-by added to her mystique. A bit of a curiosity in Athenian circles as a single woman wielding great power and influence, Sophie Lebrun, née de Barbé-Marbois, Duchess of Plaisance (1785–1854) lived an unconventional life. A metro station and an entire area, Doukessis Plakentias is named after her.

Born in Philadelphia to  French statesman and diplomat Marquis François Barbé de Marbois and his American wife Elisabeth, daughter of the Governor of Pennsylvania William Moore, Sophie married Anne-Charles Lebrun, Duc de Plaisance in 1802. At the time of their marriage, Sophie’s husband was adjutant to Napoleon and the young Duchess distinguished herself at the imperial court by virtue of her beauty and intelligence. The marriage, however, was not a particularly happy one and the duchess separated from her husband. Obsessed with the Greek struggle for independence, she arrived in Nafplio, the temporary capital of the fledgling Greek State in 1830 with her daughter.

The Greek War of Independence

The Duchess reacquainted with the Greek leader Ioannis Kapodistrias whom she had met in Paris in 1826. She became an ardent financial supporter of public education. Eventually, she became an opponent of Kapodistrias. When Kapodistrias was assassinated by Konstantinos Mavromichalis, the Duchess returned to Greece in 1834 and settled in the new capital, Athens.

At that time. Athens was a town of some 7000 souls. Within two years, however, its population had doubled, as the new administrative authorities were installed here and many new inhabitants arrived from all over Greece and other countries too. Noteworthy among the incomers were Greek and Bavarian civil servants, European philhellenes and devotees of the East, Phanariots and other educated Greeks from abroad, veterans of the War of Independence, and community leaders from the provinces, merchants, entrepreneurs and bankers, together with ordinary folk from all parts of Greece, who flocked to Athens seeking employment or simply a better life. Sophie de Marbois-Lebrun, Duchess of Plaisance was among the new expats in the city. Shortly after moving to Athens, she suffered a terrible tragedy – her daughter Eliza with whom she’d travelled to Beirut, died of pneumonia. Such was the sorrow of the Duchess that she had her daughter’s body embalmed and returned to Athens where it was placed in a crypt under her temporary home on Pireos St. 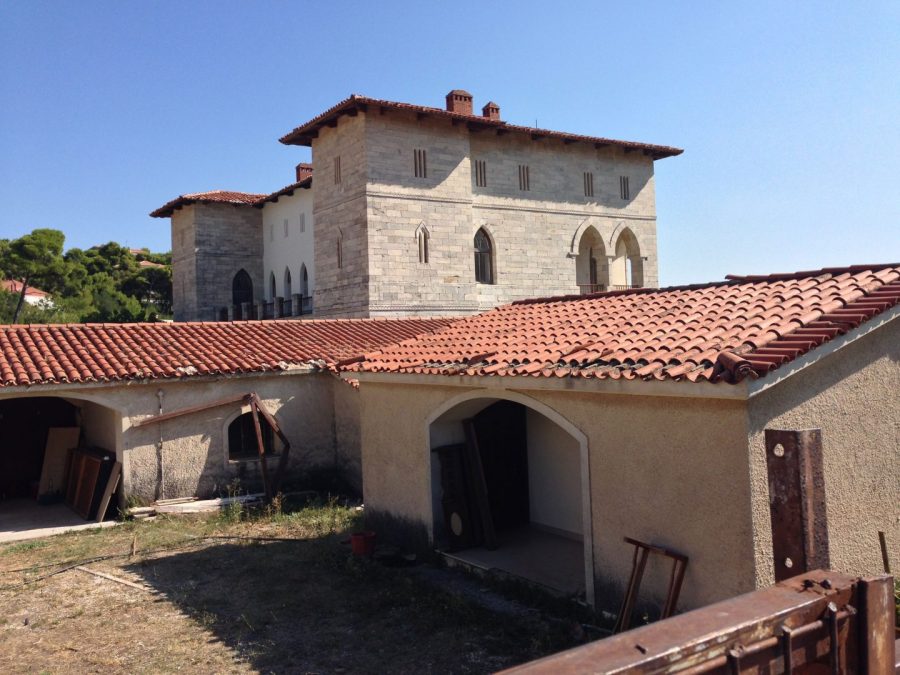 The Castle of Rododaphni in Penteli

She purchased large amounts of agricultural land chiefly near Mt. Penteli, but also all around Athens. She settled permanently in Athens in 1837.

The presence in the city of a personality such as the Duchess, with a fascinating past, a formidable fortune, a singular lifestyle and strange views, was an extraordinary event for Athenian society of the time.

A central fixture in the social life of Othonian Athens, the Duchess would host symposia on various topics of religion and politics in her palace. She was also known to dole out funds and titles of courtesy to those whom she found favourable. Something of an iconoclast, the Duchess rejected the prevailing faith, Greek Orthodoxy and instead converted to Judaism, funding the building of a Jewish synagogue in Halkida, Evia. 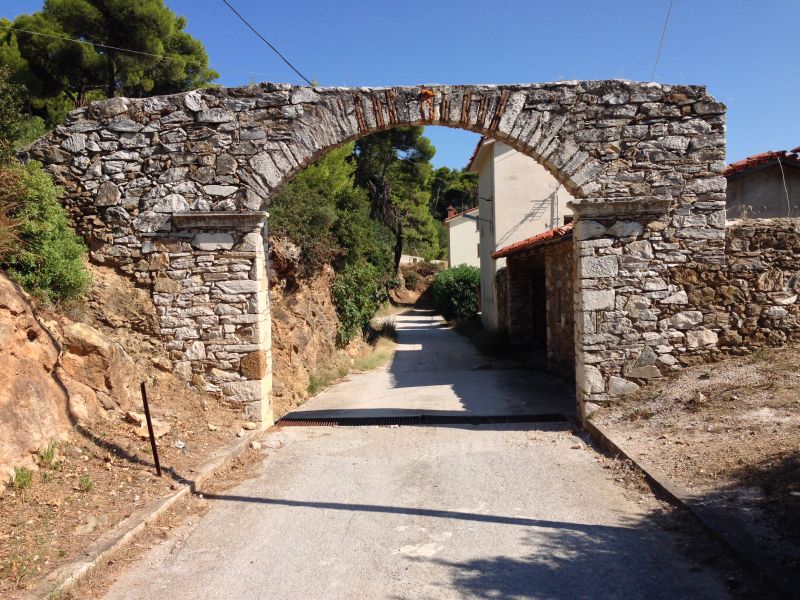 The Duchess commissioned the architect Stamatis Kleanthis to construct a total of six buildings, in Athens and its environs, including the Castello Rhododaphni on Penteli and the Villa Ilissia, her winter palace. Kleanthis completed the Tower of the Duchess of Plaisance in 1841 and then set to work on Villa Ilissia which was completed in 1848. Today the Villa Illisia is the site of the Byzantine Museum, one of the loveliest buildings erected in Athens during its early years as capital of the newly-founded Greek State.

Building of the Villa Ilissia commenced in 1840, a short distance beyond the city’s boundaries and not far from the Royal Palace (the present Parliament building), which began to go up in 1836. The Villa Ilissia was located between the right bank of the River Ilissos, nowadays covered, and the highway that had been charted not long before, linking Athens with Kifissia. Kifissias Avenue, as Vasilissis Sophias Avenue was then called, quickly developed into one of the most beautiful boulevards in Athens, a symbol of the capital’’s Europeanization and lined with handsome public buildings as well as private mansions of pre-eminent members of Athenian society, all designed by leading architects of the time. 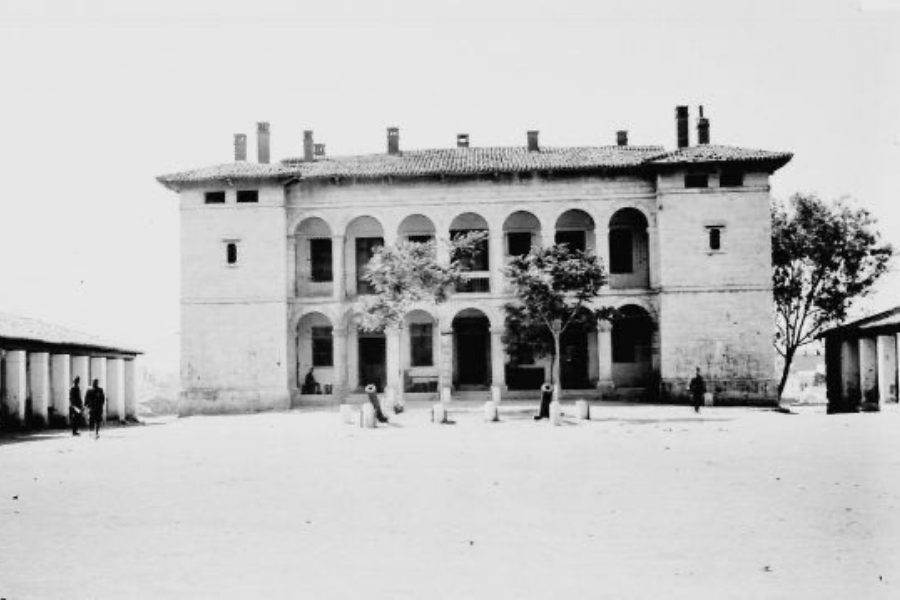 Villa Ilissia,, the Duchess of Plaisance’s primary residence, where the Byzantine Museum is housed

The Villa Ilissia is actually a complex of buildings. The central building, the Duchess’s residence, comprises two storeys and a basement. Distinguished by simplicity and strict symmetry, its exterior is revetted with marble. On the north front, facing the courtyard and Lykavittos Hill, there are seven-arched porticoes on both storeys, while two projecting towers, accommodating the staircases, rise at the corners. On the south front, originally overlooking the Ilissos, there is a three-arched portico in the middle of the ground floor and a nine-arched one on the upper storey. The few decorative elements, such as the wooden cantilevers of the roof, with the painted palmettes, do not detract from the building’s austere form. Narrow bands with relief decoration of schematic cruciform motifs function as string courses of both storeys, while at the same time emphasizing the horizontal articulation of the architectural features.

The imposing central building stands at the far end of the forecourt, which is delimited by two low lateral wings intended for ancillary uses, and the gatehouse at the entrance. Carved on the arch of the marble vaulted entrance is the name of the complex: Ilissia.

The villa complex combines elements of Classicism, such as the predominance of the horizontal line and the low closed towers, with elements of Romanticism, such as the arcaded porticos on the two fronts of the central building and the overhanging roof, which heighten the alternation of light and shade. The Duchess lived in Villa Ilissia until her death, in 1854. The complex later came into the possession of the Greek State and for three years housed the Officer Cadets’ Academy, and subsequently other military authorities.

In 1926 the Villa Ilissia was granted as the premises of the Byzantine and Christian Museum. The exterior of the building was kept more or less as Kleanthis had designed it, while the interior was modified to meet the needs of its new use. 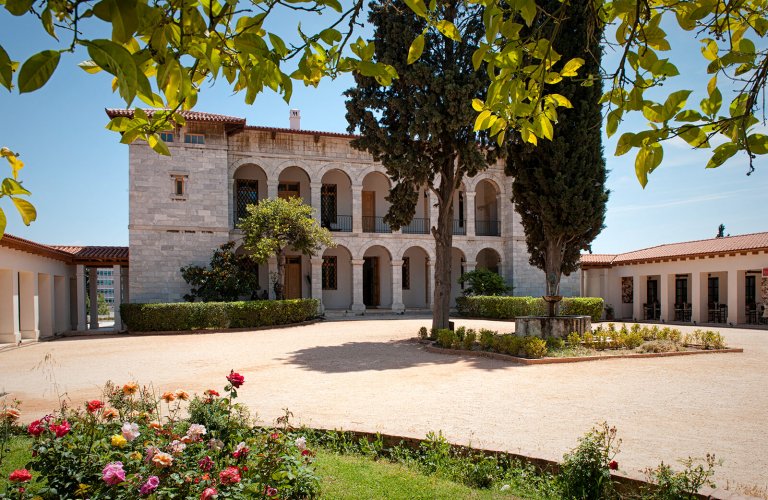 The Byzantine and Christian Museum

Major interventions were made in the ground floor, where three rooms were arranged as characteristic types of churches of the Early Christian, the Byzantine and the Postbyzantine period. The courtyard was arranged to plans by the architect Kimon Laskaris. In 1930, when the Byzantine and Christian Museum opened the doors of its permanent home to the public, a new period in the history of the Villa Ilissia was inaugurated. In the minds of thousands of visitors, the mansion of the Duchess of Plaisance has become associated with its new use as a museum.

Later in life, she commissioned Kleanthis to begin the construction of a final home and resting place for her beloved daughter’s remains, the Castle of Rododafni. She would never live to see the house completed. In 1847, it caught fire and was burned to the ground. After that, the Duchess withdrew from public life only agreeing to see her old friend, Fotini Mavromichali, Lady-in-waiting for Queen Amalia of Oldenburg. She died in 1854 and her nephew sold her lands to the Greek state. She is buried with her daughter in her Tower near Penteli.

Victoria Hislop: I yearn for the time when we can live normally again …