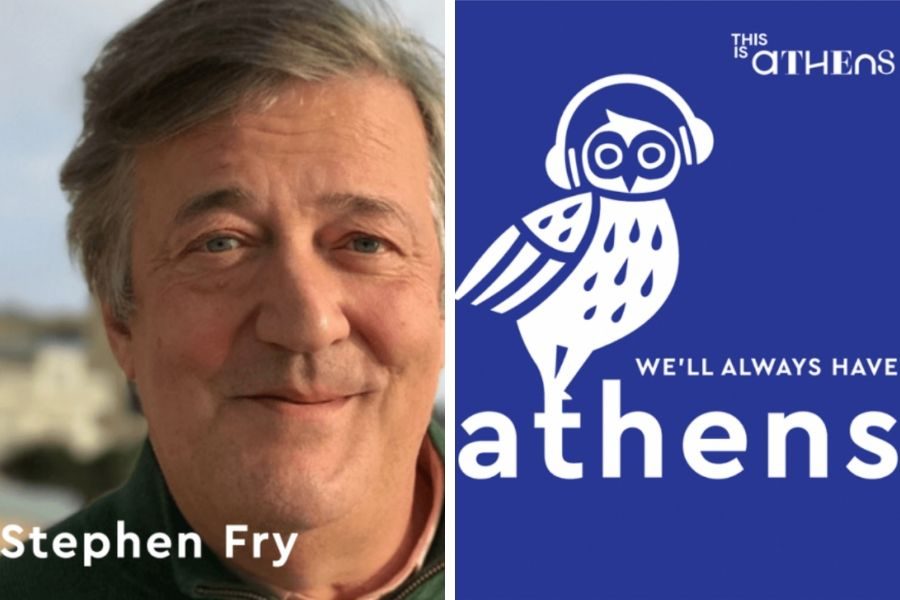 In his delightful way, Stephen Fry dips back into the ancient world with stories of tests, quests and feats of old as he celebrates his love for Athens in the thisisathens podcast series. Greek heroes and the Gods who meddle in their fates get retold in Fry’s distinctive voice as he undoubtedly adds something lively, humorous and intimate to the myth.

If the first of the ‘We’ll Always Have Athens’ podcast series is anything to go by, we are looking forward to more aural treats from the thisisathens team. Each podcast, narrated by a different host takes a fresh look into the stories of the city, from art to history to urban culture. Featuring the inimitable Stephen Fry in the first part of the series, the podcast brings alive ancient heroes and kings past. Expect drollery, impeccable diction and enthusiastic affection for his characters.

Wit is Fry’s great ally whether explaining Athena’s divine attributes or describing Hephaestus unwelcome advances and Ericthonius’ birth. Fry’s gods and heroes exchange banter, his knowledge of Athens informs his narrative, and his quirky facts and appended footnotes illuminate the meaning of a myth.

One of the world’s greatest storytellers, Stephen Fry basks in the company of the Greek gods, heroes and men whose gripping tales still echo today. Narrated in engaging and fluent prose, this podcast is to be heard, re-heard and shared. We are fairly sure you’ll be tempted to download his audiobook on Audible, titled Mythos and his follow-up book Heroes.

Excerpts from an interview with the icon in 2017.

On the relevance of Greek Myths in 21st Century culture:

The thing that really struck me is how the Greeks have this ability to crystallise, to distil and to express very deep characteristics of humanity, such that the myths are absolutely as relevant today as they ever could be. It’s not because they’re vague and so they can fit anything, rather it’s actually that they’re very specific. Isn’t it astonishing that these thousand-year-old myths could be so absolutely pertinent to the major problem facing mankind in the next 100 years?

On Myths and Truth:

It is interesting to look at myths and wonder about where truth resides in them. We live in an age in which we’re very obsessed, nervous and almost neurotic about the wall that separates truth from fantasy from lies and fiction. It’s very important for us to believe there is such a thing as fact. The magical thing about myth is that it hangs in a separate space between fact and fiction, because it’s full of truth. It’s full of truth but it is not a representation or narrative of true events. The mythic space is a place where you can tell absolute truths about the human experience. Myths are about sunlight and personality, they’re alive and sexy.

On his favourite God or Goddess:

Perhaps my favourite God is Hermes, just because he represents a lot of what I like – joking, storytelling, and he’s just generally a slightly transgressive figure. But also he’s funny and his childhood is amazing. I would probably say Athena is my favourite Goddess. I love the whole mixture of everything that Athena represents. She was handicraft and also wisdom and thought, but in a different way to Apollo, who’s obviously a fabulous God too.

They could all be cruel, and you have to remember that none of them is a perfect, wise God. That’s one of the things I love about the Greek gods – that they’re as capricious, as inconsistent, as wilful and as contradictory as we are. They’re just fully rounded complex characters.