Menu
Home | City Life | Why November 17 is still a date that resonates in Greece?

Why November 17 is still a date that resonates in Greece? 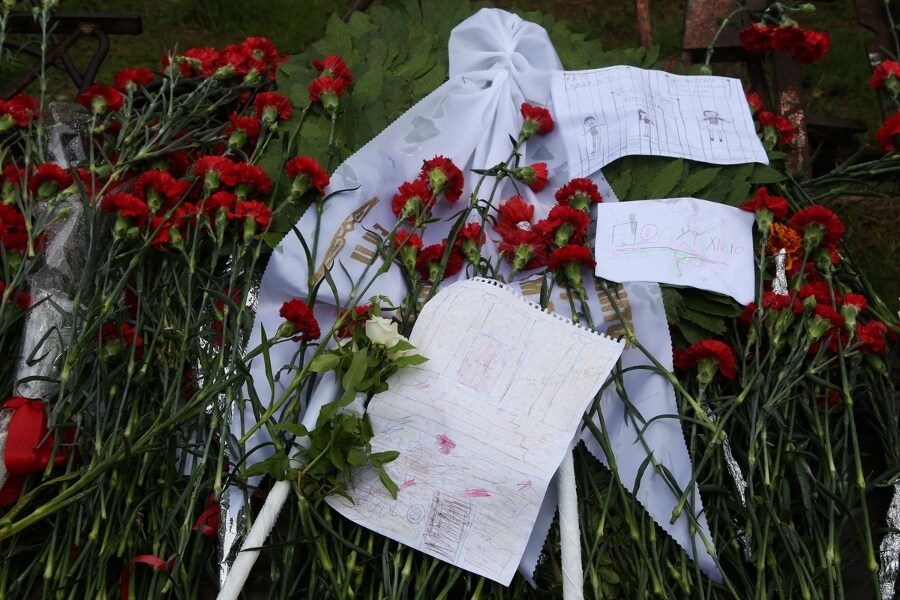 Always wanted to know why the date November 17 is such a big deal but didn’t quite know why. Nor did you quite understand why Greece’s most notorious terrorist group goes by the same name. Accomplished writer Sofka Zinovieff lends context and historical explanation to this all-important date in the Greek calendar in this excerpt from her book “Eurydice Street: A Place in Athens”, published in 2004, and maps the evolution of the day’s significance since 1973.

I can appreciate a rousing radical slogan as much as the next person. My grandmother was a White Russian who grew up to become a British “Red” or communist, and in spite of Communism’s dismal failure, I can sympathise with her and others’ dreams of a better world.  “Freedom!” “Democracy!” “Out with the Fascists!” These ideals can sound almost quaintly optimistic in our complex, globalised world, and most Greeks are undeniably dedicated to a capitalist, consumer lifestyle. However, these values still have enough resonance to appeal to the many thousands of Greeks who gather each year at Athens’ Polytechnic on November 17th.  This year I decided to go and see for myself what all the fuss is about. Why do schools all over the country have celebrations for this day? Why do crowds still march to the US Embassy? And why did Greece’s most notorious terrorist group appropriate 17 November as their name? 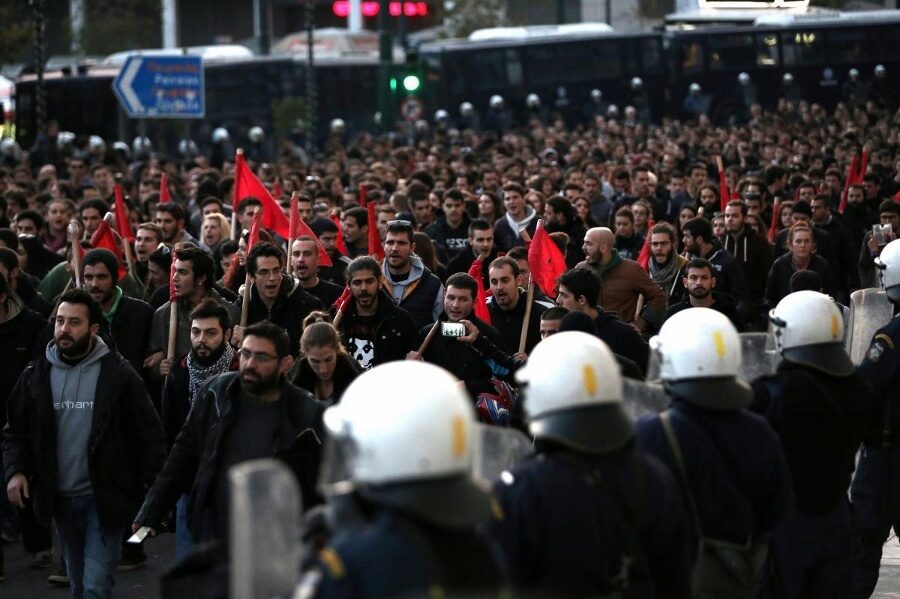 By late morning, when I arrived, the streets around the prestigious Polytechnic University were filled with crowds: families with children; retired couples; and huge numbers of students. The majority of people were too young to remember the events of 34 years ago, when students occupied the buildings to protest against the oppressive regime of the Colonel’s Junta (1967-74). But everyone knows the dramatic story of how tanks stormed the gates, killing and injuring young protesters, and how this outrage changed public opinion and helped lead to the downfall of the dictatorship the following year, in 1974. Over time, the event has been elevated as one of the critical points in Greek history, and people of all political colours lay flowers at the memorial and recall the significance of the students, school children and others who fought to get rid of the Colonels.

Clutching red carnations and roses, the streams of people entering the Polytechnic reminded me of pilgrims arriving at a holy destination, and in fact, the buildings and grounds have become like a shrine to left-wing politics. Ever since the “martyrs” of 1973 were killed, the police have been forbidden by the sanctity of asylum law to enter the university under any circumstances. These days however, it isn’t blood but red paint which splatters the walls of the imposing if run-down neoclassical buildings.  Radical slogans encourage resistance in the name of freedom and national independence, and are often accompanied by hammers and sickles and “KKE” (the Greek Communist Party). 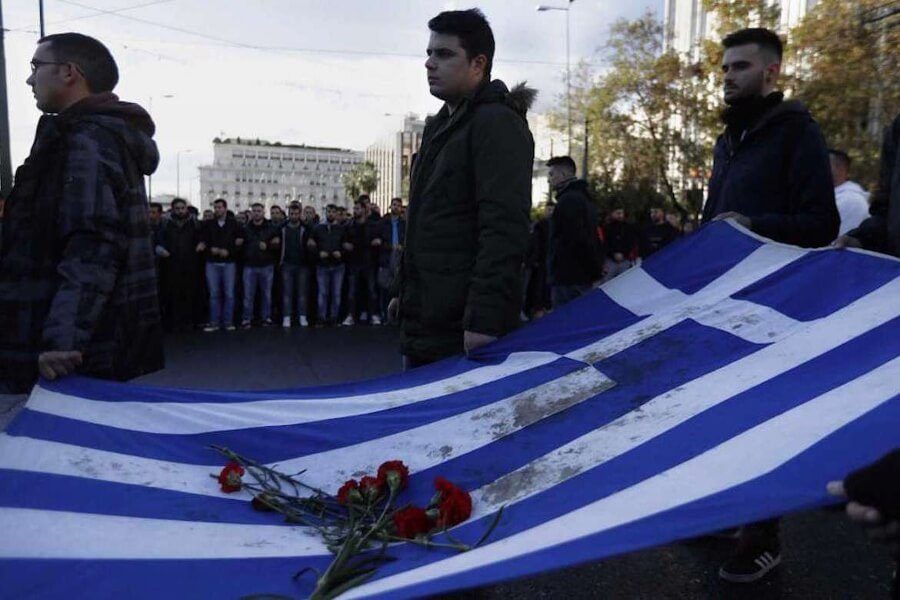 Inside the shabby lecture halls, I filed past various student exhibitions. Hand-made posters tell the story (once again) of what happened in 1973; there are photographs of the approximately 34 victims (others argue that hundreds were badly or fatally injured), and scenes from within the very rooms I was now standing in. Middle-class families (with children and grandparents) sat alongside teenage activists to watch films of tanks crashing through the gates, of soldiers beating and arresting students, and the famous recordings of the university radio:

Many argue that despite the undeniable courage and heroism of the Polytechnic students in 1973, the celebrations for 17 November have been exploited by the extreme Left. Worse, the day is now associated with the eponymous terrorist group (which only began its murderous activities after the end of the Junta, until it was dismantled in 2002). It is also true that the march from the Polytechnic to the US Embassy attracts anarchists and extreme elements as well as serious, politically committed people – Molotov cocktails and tear-gas are flung with abandon, and this year saw over 8,000 police on the streets. However, Greece has had to fight for its freedom over the nearly two centuries since its independence, and there are reasons why the US has been viewed as yet another Goliath which oppressed the Greek David (in particular, for its support of the Junta). 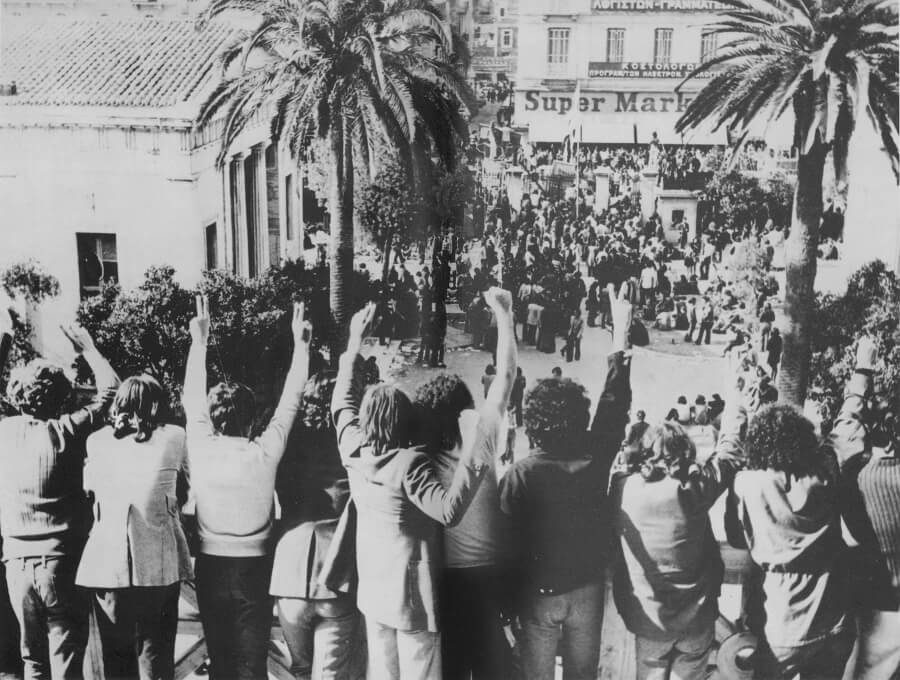 Notwithstanding its “red” overtones, 17 November has become one of the most important days in the Greek calendar, along with Greek Independence Day on 25 March and “Ochi (No) Day” on 28 October.  The Polytechnic is now the symbol of the Junta’s demise, and as such is viewed in terms of a continuing fight for freedom in Greek history. Next to pictures of students who defied the Colonels in 1973 are others of  ELAS partisans who struggled against the Nazis in World War II, and it’s not a large mental jump to continue back to the heroes of 1821 who fought for independence from the Ottoman Turks. Fortunately, Greeks are now as “free” as the next European citizen and when marchers shout “Bread, education, freedom!” it can sound somewhat out of place in 2007. Nevertheless, resistance is passed on with mother’s milk (witness the children who regularly stage sit-ins and close their schools). Fortunately, the old revolutionary oath “Freedom or death!” is not a choice that Greeks have to make any more, but they are strongly aware that they did in the past.

Sofka Zinovieff is the author of Putney; Eurydice Street: A Place in Athens; The House on Paradise street; and Red Princess: A Revolutionary Life | Website 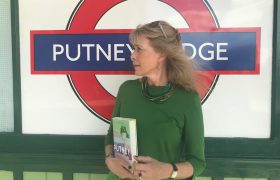 Ceramics at the crossroads of Contemporary Design and Ancient Art: Mon Coin Studio