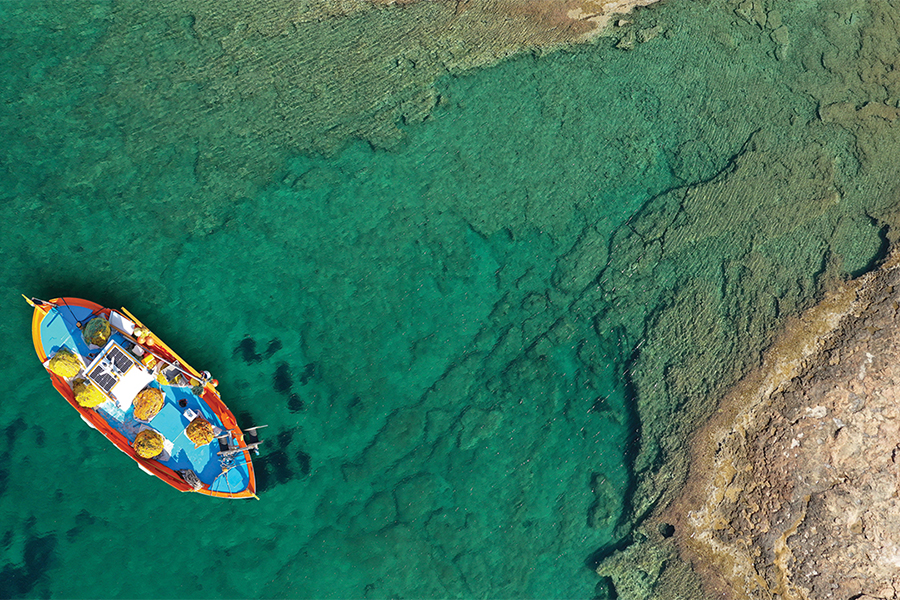 Sherri Moshman Paganos revisits both the iconic film location of Zorba the Greek – Stavros beach in Crete – and her memorable encounter with Oscar-winning cinematographer Walter Lassally, the man who made Zorba’s dance immortal, and who would himself spend his final decades living on “Zorba’s Beach”.

As evening draws near on Stavros beach on Crete, the ghosts of Zorba and Basil, his beloved Boss, are dancing for those in the know. This summer I revisited Stavros, where in the classic ending scene of Zorba the Greek, Basil (Alan Bates) begs Anthony Quinn, the immortal Zorba, to teach him to dance. The camera slowly pulls away from the two figures laughing and dancing syrtaki on the unspoilt and pristine beach where much of Zorba was filmed in atmospheric black and white. Despite its inevitable discovery over the years as the beach of Zorba and some inevitable tackiness (a lifesize Anthony Quinn poster on a wooden frame with the caption “This is Zorba’s Beach” greets beachgoers), Stavros remains a lovely village by the sea with crystalline and clear turquoise water, the beach now filled with colorful green and white umbrellas and orange sea beds. 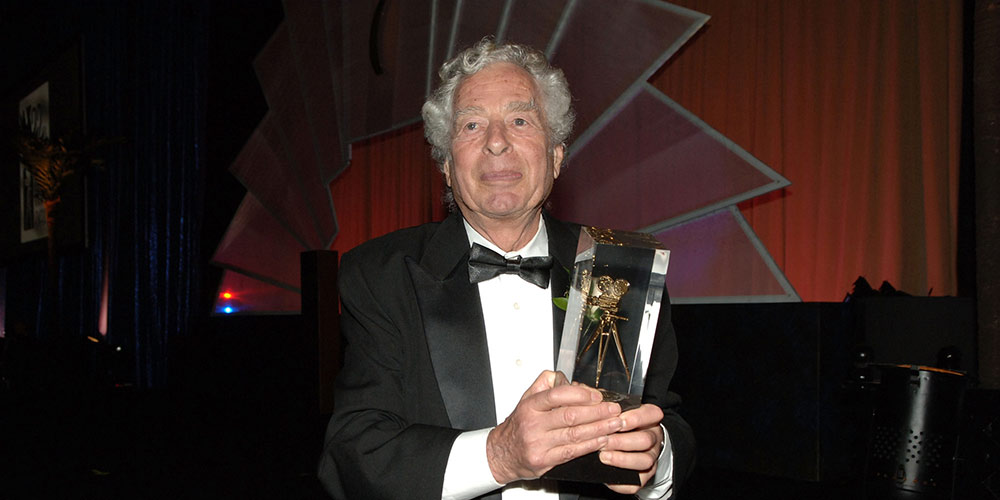 Walter Lasally with his Oscar

My mind goes back to the summer of 2009 when I met Walter Lassally, the Oscar-winning cinematographer, and director of photography, for Zorba, here in front of the former ‘Christiana’ restaurant, which burned to the ground in 2012. It was a dark dingy looking place. But it contained something inside that drew visitors from around the world: the Oscar statuette that Lassally got for his cinematography for the film and that he donated to the restaurant. The Oscar, however, also burned in the fire, and from ‘Christiana’s’ ashes, rose the Zorba-themed ‘Sea View Beach Bar’. Thanks to the Sea View, everyone here knows that this beach is connected with the movie. They might even think idly about the famous ending as they order a strawberry smoothie on the beach or have the “Special: Zorba’s Souvalaki” at one of the tables set up on the grass or look at the movie stills on the walls, such as Bates offering his umbrella to the Widow, (Irene Pappas) or Quinn and Bates meeting for the first time in Pireaus. But I can’t help but wonder how many have actually seen the film and know that its celebrated cinematographer
Walter Lassally actually made his home for nearly twenty years in this pleasant seaside village at the northern end of the Akrotiri peninsula, 14 kilometers from Hania. After Lassally retired, he and his wife Nadia visited all the places that he had worked on throughout his film career, with an eye to decide where to settle down and live. It was Stavros, backdrop for Zorba, that won their hearts. Several years later after Nadia died in 1994, he made the move a reality. Here, Lassally lived with his dogs, until his recent death, aged 90, on October 23rd at a hospital in Hania. 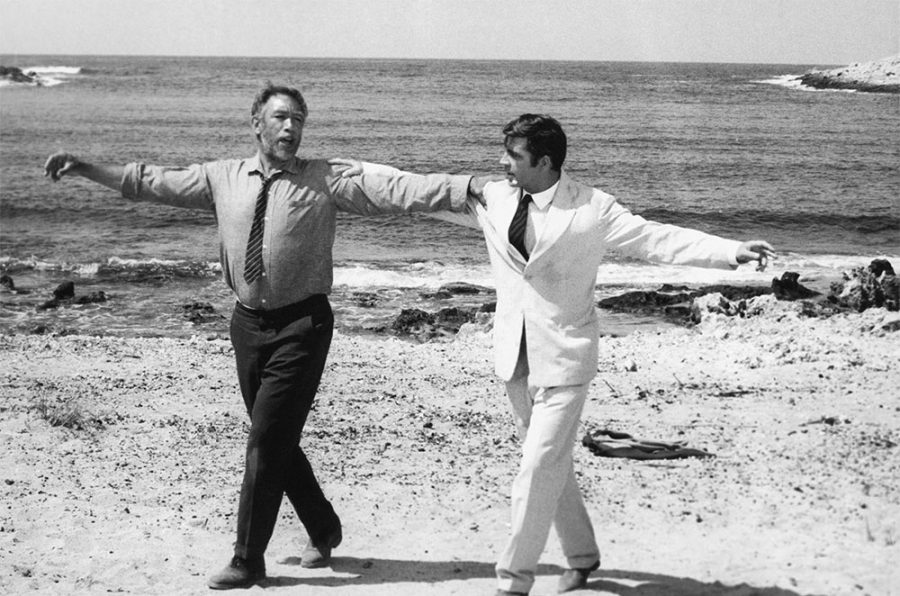 From the 1964 film Zorba the Greek

Born in Germany in 1926, Lassally fled the Nazis as a child along with his family, and they settled in England where he felt the stigma of being a “displaced person”. With his father a film director and an early pioneer in the film industry, it was natural that the young Lassally follow in his footsteps, and he first got involved in documentaries showing British workers. Later, he joined the Free Wave cinema movement with director Tony Richardson in the late 50’s and early 60’s, a movement “totally ignored by the mainstream,” as Lassally expressed to me once, with such social realism films as A Taste of Honey and The Loneliness of the Long Distance Runner, and then later Tom Jones, a worldwide hit. On our first encounter, Lassally had greeted me courteously with an impish smile, red faced, with a full head of white curly hair. The table was set out on the sidewalk across the road right above the beach. Although it was only late morning, he had already started on a carafe of cold white wine and poured a glass for me. A June day held a slight chill in the air. The umbrellas, then blue, sheltered a few families with children playing in the sand. It took great imagination to think of the beach in the early 60’s; no electricity, no water, certainly no Greek or other European tourists enjoying the clear sparkling sea, a delight to swim in. And it took even more imagination to think in black & white, as it had to be in the film: Bates’ white jacket that he tosses onto the sand, Quinn rolling up the sleeves of his dark shirt, the waves of the sea beyond, the rocks, the starkness of the mountain. 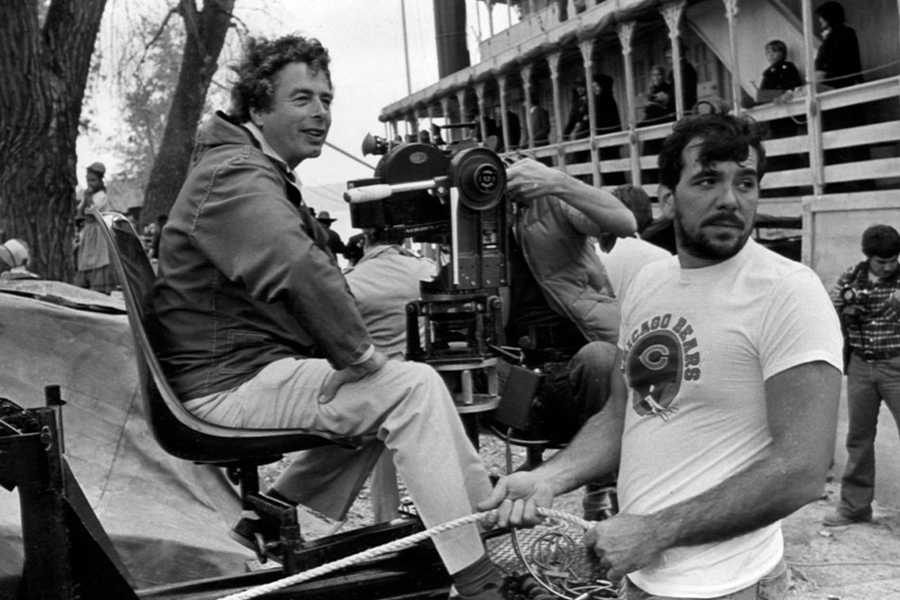 “Over there,” Lasally pointed out to me, knowing this is what I – what everyone – wanted to see, “is where they danced. And that’s where,” he had gestured ahead to the barren rocky mountain with sparse growing shrubs, “where the logging scene happens.” The logs that start flying in all directions down the mountain is the impetus for the Boss learning not only how to dance, but how to laugh, and consequently how to live. Lassally enjoyed relating stories about the actors. Quinn’s huge ego was legendary, “and he was used to yes men, fawning over him,” Lassally told me. “He brought four of them with him and their sole role was to tell him from morning to night how marvelous he was.” He laughed. “Another thing is that he told us he wanted to do things in only one take. I was the one to tell him that wasn’t the way that Cacoyiannis worked. He was surprised that someone was questioning him but I think he actually liked that somebody stood up to him!” “Another thing about Quinn,” he had told me, “is that he really felt most at home doing physical acts — there’s a scene that unfortunately was cut where he picks up a table with his teeth! But he felt less sure of himself with speaking Greek words, and Quinn practiced the word melomakarona literally hundreds of times before he had to say it twice in one scene.

When Lasally and director Michael Cacoyiannis set about turning Nikos Kazantzakis’ complex novel into a film, they had in mind only one person for the role of Zorba: Anthony Quinn, who they’d seen in Fellini’s La Strada

” Zorba was actually the 5th film he and Cacoyiannis cooperated on. Their collaboration dated back to the mid-50’s when, dissatisfied with the cameraman he had worked with on the film “Stella,” Cacoyiannis heard about the “young and talented Lassally” from the British director Lindsay Anderson and sight unseen, proposed that he come to Greece to work with him. The first film they cooperated on, To Koritisi me ta Mavra (The Girl in Black) has the lyrical black & white realism that Lassally was so fond of. His favorite story was when the director and the cast of the film – Elly Lambetti, Dimitris Horn and Yorgos Fountas, “in full evening dress, came to meet me for the first time at the airport. They were waiting for someone mature to get out of the plane,” said Lassally. “Instead, although I was 28, I looked like a 16 When Lasally and director Michael Cacoyiannis set about turning Nikos Kazantzakis’ complex novel into a film, they had in mind only one person for the role of Zorba: Anthony Quinn, who they’d seen in Fellini’s La Strada. year old schoolboy. This was not what they expected!” 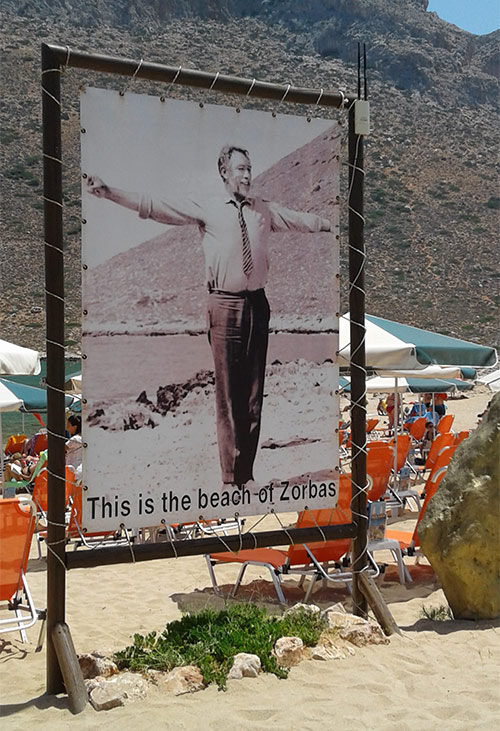 After Zorba in 1964, Lassally did one more film with Cacoyiannis three years later, “a terrible flop! I won’t say anything about it,” he had said mischievously, “but here’s the title if you want to look it up: The Day the Fish Came Out.” Although he continued doing some Greek movies, with the advent of the junta, he decided to concentrate more on English films and so began his collaboration with “the third important director of my life. “ This was James Ivory, who he teamed up with through the 70’s and 80’s on a number of films, including the acclaimed Heat and Dust. Several glasses of wine later, overlooking the beach and some earlyin-the-season swimmers, Lassally had taken me into the Christiana to see the Oscar which he took down from the top shelf. Years of handling it had made the gold start to lose its luster and he had reluctantly put it in a box to help preserve it better. Ironically, keeping it here in its “spiritual home” as he called it, didn’t help the precious statuette survive the fire. In the new Sea View, besides the film stills, is a well-known side profile photo of Kazantzakis in white billowing shirt and holding a pen, and one of a young black-haired Mikis Theodorakis, composer of the immortal Zorba music, conducting the orchestra. But conspicuously absent is a photo to honor the world-renowned and venerated Walter Lassally who not only won an Oscar for the cinematography, but became an honorary Stavros resident, visited by fans from all over the world. Some years ago ERT did a documentary about Lassally entitled Walter the Greek, a name that locals used too in talking about their illustrious inhabitant. Evening is drawing near. Under the green and white umbrella on Stavros beach, I stare at the rugged mountain across the bay. In my mind, the bouzouki starts playing and there they are, on this desolate windswept beach, Zorba and “Boss,” arms on shoulders, Walter Lassally’s camera having truly made their dance eternal. 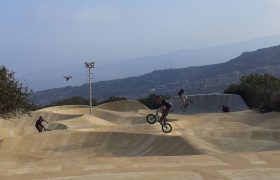 Go with the Flow: The Andros Skate Park that Becam...

Culture at the time of a pandemic