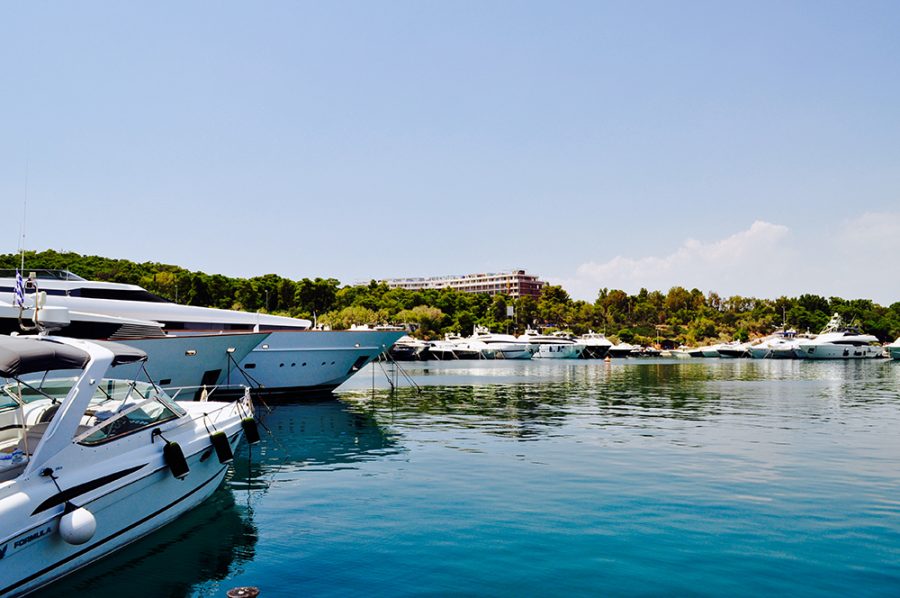 Vouliagmeni promises island magic, alluring glamour and great dining options but its real charm lies in its off-grid beauty. Wedged between the craggy shoulder of the Hymettus and the inviting turquoise sweep of the Saronic, this coastal suburb just 20 kilometres off the city centre, is all the more precious for what it has managed not to become.

Kyria Athina peels her potatoes with a vigour that defies her 70-odd years at Louizidis taverna, favoured by Vouliagmeniotes as the go-to place for mageirefta and local gossip for the past 50 years. The lottery vendor, who goes by the single name of Kostas, asks regulars after their children and doles out some unproferred advice on how to treat a sunburn to a young tourist couple. Cats doze in the blazing afternoon sun. A whiff of lavender and the musky scent of oregano permeate the air.  The staff here have remained unchanged, as has the menu.

Vouliagmeni wears its reputation as the playground of the rich and discreet with a very grounded, down-to-earth, village-like conviviality. Despite its glam quotient, most residents know each other by name, face, or reputation. From an unassuming summering destination of well-heeled Athenians to being the most coveted piece of the Greek real estate pie, Vouliagmeni has, impossibly, managed to retain its savage beauty, still holding on to its cherished way of island-in-the-city living.

With just over 5,000 permanent residents, all Vouliagmeni has by way of entertainment is a lone open-air cinema. There are no clubs, no museums, no shops selling anything other than food, save for two supermarkets and boutiques on Astir Beach selling swimwear and beach essentials. 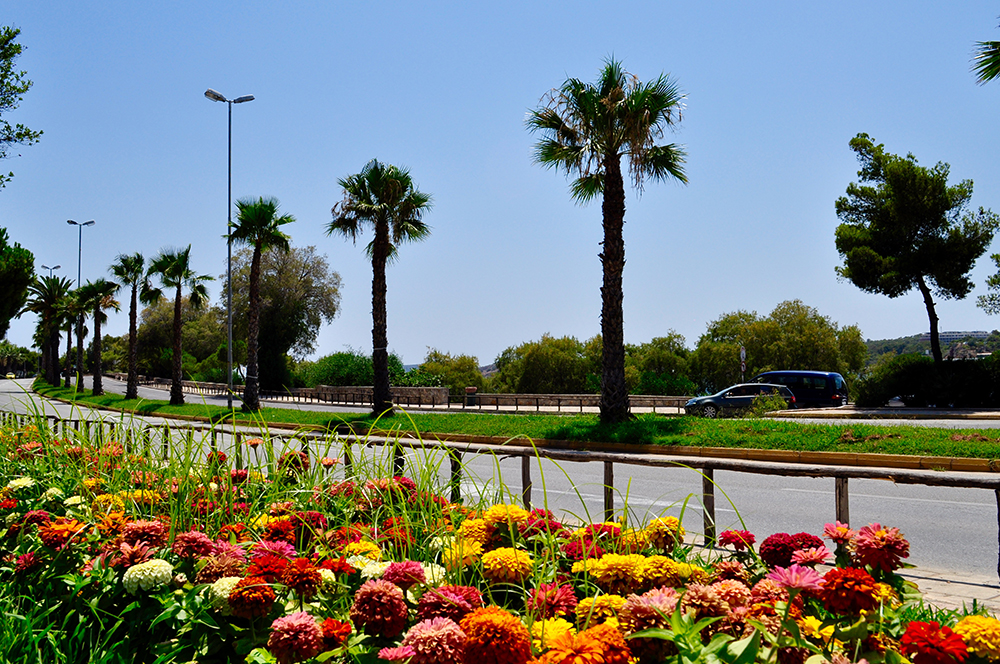 But what it lacks in ruins, shopping and nightlife, it more than compensates with its raw beauty and authenticity. Wallowing between a molten turquoise bay and a jagged mountain slope, this is where the white smudge of the urban sprawl of coastal Athens gives way to palm trees, umbrella pines, flowers and fountains. With a narrow, winding neck of land snaking around the bay and the open sea, its impeccably well-kept boulevards, long, sandy beaches, two nautical clubs that rival each other in the watersport activities they offer, and a host of dining options from elemental taverna fare to pricey gourmet offerings, it is easily the most hankered after coastal address for Athenians and foreigners-in-the-know.

But what marks it as the Athenian Riviera’s prized jewel is its allure as an iconic luxury destination attracting the glamorous set and their large yachts at the iconic Astir Hotel and its storied marina. Every A-lister from Jackie O to President Obama have made a stop here. And few real estate developments have elicited as much controversy or have been awaited with as much anticipation as the opening of the Four Seasons Astir Hotel in March 2019, expected to set a new benchmark for luxury hospitality.  Its investors have pumped in more than 100 million euros into refurbishing the hotel’s facilities with features that will include 300 rooms and a unique beachfront promenade. For Vouliagmeni locals, however, what will really change its stature – and their everyday quality of life – is the ambitious redevelopment plan that includes a significant upgrade of the mooring facilities at the Astir harbour, a total make-over of the Astir Beach waterfront and the creation of a wooded Peninsula Park with running tracks and sports facilities open to the public at the end of the promontory.

For its pocket-size, there are enough things to do in Vouliagmeni year-round. A good place to start is the cavernous Vouliagmeni Lake that lies etched into an immense limestone boulder. This geological marvel’s tepid springs keep the water at a swim-friendly 24 C. Its emerald brackish waters, reputedly blessed with therapeutic properties, has always been a draw. But urban legends about sinister waters, murky tunnels, lost divers and strange water creatures abound, adding to its mystique. The stunningly beautiful terrace that skirts the lake doubles up as a restaurant in the evenings – and is open throughout the summer until late September. Sip on a frappé, get a massage, or take in one of the several jazz concerts and yoga sessions on its lawns. 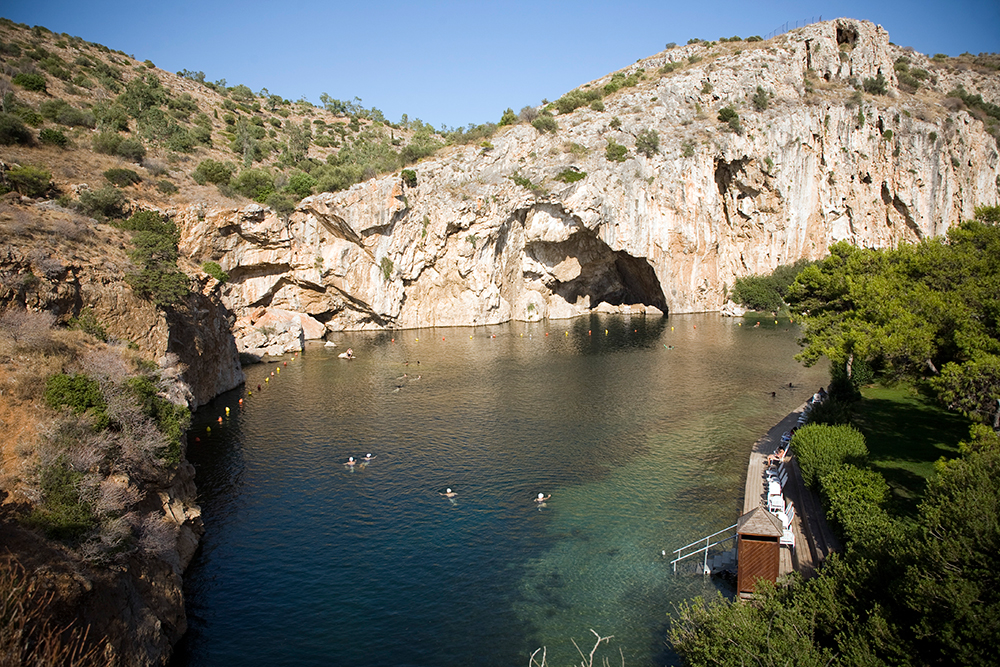 While in Athens, the sea is no more than a sparkle glimpsed between concrete, in Vouliagmeni, it commands the eye, lolling in turquoise splendour in an expansive beach-rimmed bay. The sandy stretches that hug the narrow isthmus linking Vouliagmeni to its harbour are not pebbly or gravelly like most Greek beaches, drawing Athenians here on a Sunday to swim, windsurf or sail – or simply to enjoy long lunches of local fish.

If a languorous beach day is what you’re after, the Astir Beach’s curtained day-beds, beach spa and waiter service to parasoled sunbeds should convince you. Dining options here range from the newly opened Nice n Easy’s organic and healthy-gourmet fare to Greek seafood at 40.  The beach also boasts the ruins of the temple of Apollo Zoster. The myth goes that Leto, who had caught Zeus’ roving eye, was hounded by Hera across land and sea. She threw off her girdle here on her hasty journey to Delos to deliver Apollo, who lends his name to the shoreline that stretches from Vouliagmeni to Sounion.

For the sporty, there’s water-skiing, wake-boarding, paddling, wind-surfing and even aqua-aerobics. Entrance to the beach may be pricey at 50 euros a sunbed on the weekend and 30 euros on weekdays but then that’s the price you pay to people watch, flaunt your designer swimwear and earn morning-after bragging rights. Comparatively, Vouliagmeni Beach with a playground, tennis courts, a snack bar, watersport equipment, and a blue flag certification for cleanliness, is a great place to spend the day at a mere 5 euros on the weekend and 4 euros on weekdays. But it means jostling with the masses for towel space! If you’re loathe to pay to swim, the narrow strip of sand just across the high-frills Astir Beach and next to the Nautical club has the same enticingly clear water and free views along the bay. Early morning bathers here include senior aqua-gymming women in rosy swimsuits, fondly nicknamed pink flamingos by locals. Most locals tend to seek out the free beaches along Kavouri just past Margi Hotel or just jump off the jetty by Akti. Nudists and topless skinny-dippers tend to favour any of the several coves that hug the coast between Vouliagmeni and Varkiza. Teetering amid a series of rocky inlets is Limanakia, the preferred swimming destination for the hipster set and the gay community. There’s music, cold beer and no known closing hours – what’s not to like? Another little insider secret is the Winter Swimmers’ Club where spry octogenarians and wiry retirees swim year round, furthering Vouliagmeni’s reputation as a spa town. 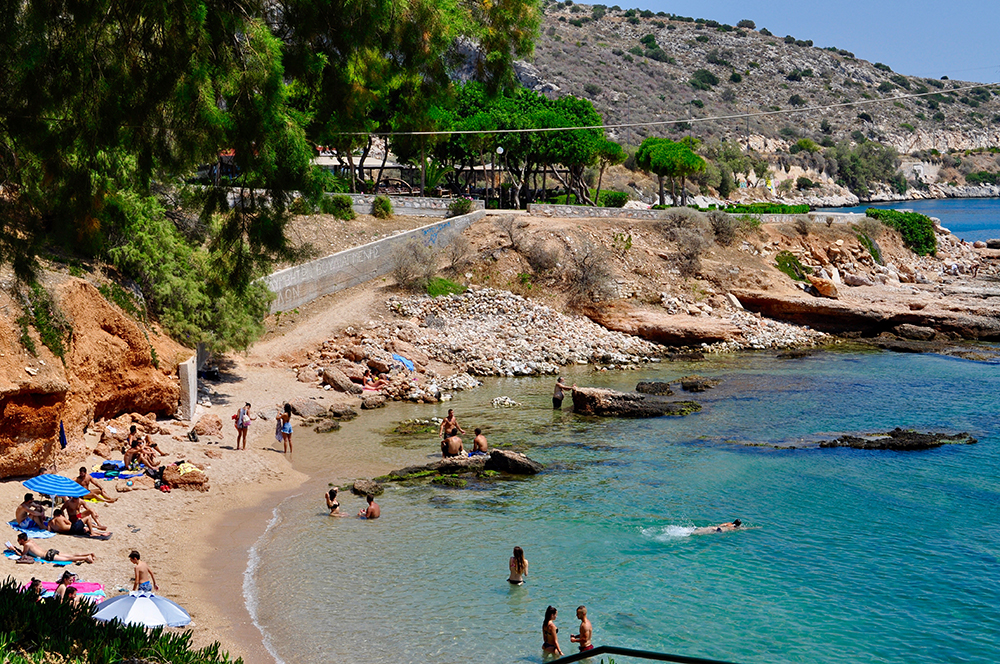 The Nautical Club of Vouliagmeni (NOB), founded in 1937, and the highly subsidized and popular Vouliagmeni Residents’ Nautical Club (NOKB) offer summer camps and sporting activities throughout the year and indeed, this idyllic suburb prides itself as home to world-class wind-surfing champions (including Nikolaos Kaklamanakis who won the Olympic gold medal in Atlanta and silver at the Athens Olympics) and European Championship-winning women’s and men’s water polo teams. Omilos at the NOB and En Plo at NOKB offer a terrific perch to watch young children bounce off water glides or navigate their little Optimists. The newly opened Blue Fish at NOKB with its stone walls, white tables and rustic décor sets the tone for an unhurried meal. This is the closest you can get to having a meal on the water and what’s more, unlike its cheesier and pricier seaside counterparts, the food here is a delightfully engaging play on textures and flavours. Perfect for pre-or post-swim meals or indeed, in between dips! 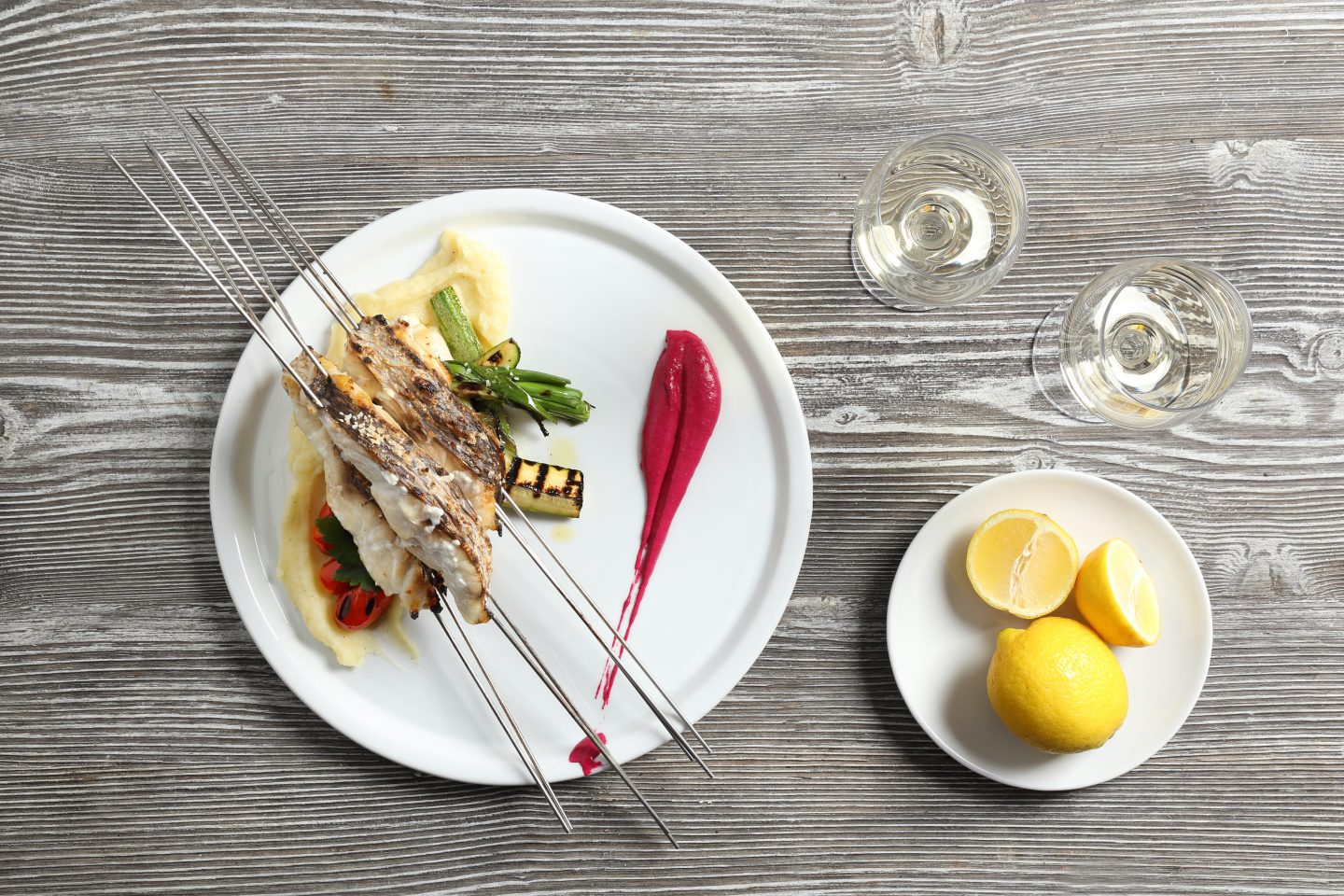 Vouliagmeni is practically built over the lake and its open, sage-scented hillsides planted with wild olives, eucalyptus, pines and evergreen oaks make for one of the most picturesque and unspoilt corners of Attica with 360 views to the sea. A breathtakingly beautiful walking trail, it is a sanctuary for wildlife, and in spring, carpeted with wild irises, chamomile and poppies. Another favoured walking path is along the Kavouri promenade to the roar of the ocean crashing to the song of cicadas.

For fine dining, Ithaki suspended on a cliff above Astir beach is expensive but well worth the splurge for special occasions. Nobu’s Matsuhisa in the Astir Complex with its sublime, refined Japanese-Peruvian cuisine remains a destination of choice for its spectacular setting as for its legendary black cod in miso that must surely feature on every foodie’s bucket list. The Moorings at the Vouliagmeni marina is a good pit stop for coffees, cocktails and gourmet meals with a side-order of yacht-envy. Work out your excesses by strolling along the harbour and taking in some serious eye-candy – no leaky fishing boats here, just million-dollar sleek yachts. Lutetia at the small but luxurious 11-room Somewhere Hotel offers a discreet getaway to tuck into a sumptuous meal. Candlelit farm-to-table dinners by the pool at Malabar in boutique hotel Margi’s jasmine-scented courtyard are ideal to amp up the romance. The latest addition to the Margi Hotel’s leisure offerings is Krabo, a beautiful secluded cove equipped with sundecks, cocktails and a sophisticated dining experience. For ouzo and mezes, Akti is a good option, especially for a post-swim meze though it’s a tad too over-priced for fish. Sardelles, a new seafood arrival on the waterfront has established itself as a great value-for-money neo- taverna. Only glitch: they follow a strict no-reservations policy, so you cannot book ahead. The 130-year old Labros, a steady point of reference in every sepia-tinted image of Vouliagmeni, still has a cachet for Athenians who head there to relive the nostalgia of Sunday family lunches.  For daily meals, locals flock to the family-run Louizidis on Vouliagmeni’s main square, which has fed generations with good, wholesome Greek staples for years. Zaxos which used to be souvlaki king for 25 years has now been dethroned by newcomers Takis for succulent skewered chicken and Tylichto for its filling gyros wraps. 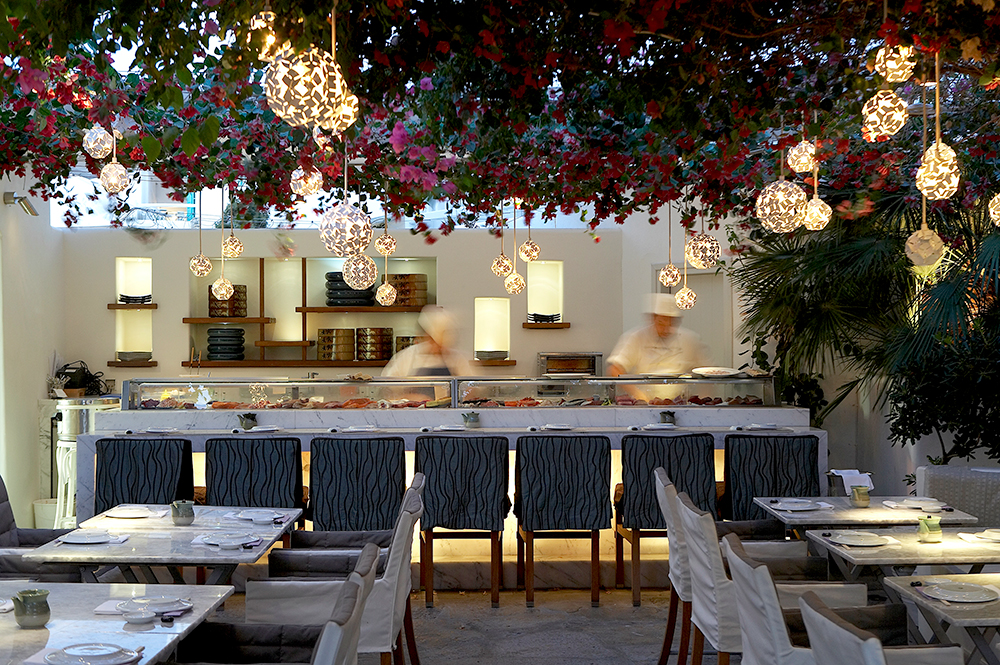 It seems as if the strip that runs parallel to the main coastal road is a 24-hour caffeine zone and most locals split time between the most popular cafes to catch up with newspapers and friends. Aquamarina is yet another Vouliagmeni ‘institution’ with its old-fashioned charms and retro green rexine chairs, reputed for its meringues and millefeuilles, popular with the older generation.  Sloop is a laid-back hangout with good coffee, attentive service, an incredible view to the limpid Saronic bay and the crunchiest potato wedges! Rumors at the far-end is a fave ‘steki’ for young professionals who work in the neighborhood. Waffle House is a family pleaser and is packed to the gills any given time of the day, throughout the year. The local bakery Artopolis doubles up as a café Philip and serves light snacks and salads. A good way to end a lazy summer evening is at Akti, Vouliagmeni’s lone summer cinema that has survived real-estate sharks and Netflix.  Film screenings usually start at 9 pm, with a second screening at around 11pm – it is a very convivial affair as families troop in with children, dogs, cigarettes and snacks to watch re-runs under the stars.