Menu
Home | News | The Man who would be Greek 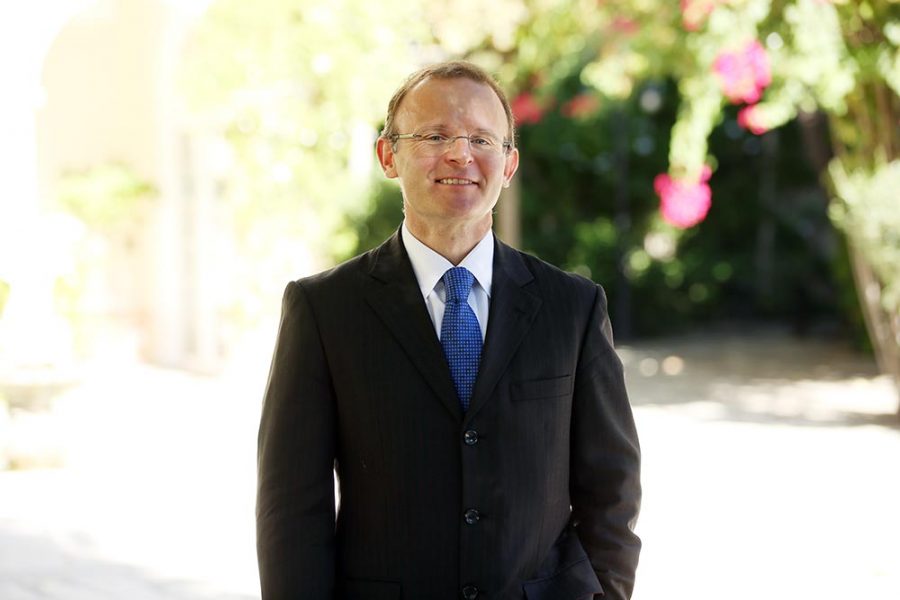 It’s a preternaturally fine Autumn day. The British Ambassador for Greece, John Kittmer, poses in the garden courtyard of the Residence, which once housed Eleftherios Venizelos, for Insider’s photographer.

Outside the tall wrought-iron gates of this grand statesman’s residence in Kolonaki – never far away – come the sounds of organized unrest. Greece’s prolonged Winter of Discontent.

Angry students – about 3000 – are engaged in noisy protest against government reforms nearby, burning an EU flag for the cameras en-route to Parliament House.

Next to where Ambassador Kittmer stands out on the sunny courtyard, is a small, cheerful conservatory filled with well-ordered lines of pots and thriving ferns. Recalling the fondness that many British men summon for their gardens, I ask the Ambassador if perhaps this is his meditation room: the place he comes to switch off and seek inspiration for the myriad complex issues that his term as British envoy has collided with. Political instability. Capital Controls. Refugee Crises.

‘No,’ he laughs, clearly enjoying the image of himself as some kind of Alan Titchmarsh in Athens. ‘It is actually just the nursery. But this is my meditation room,’ he admits, gesturing at the tranquil terrace around us.

When deeper introspection and clarity is called for, Ambassador Kittmer embarks on one of his epic Greek journeys. Always on foot, in the spirit of the ancients whom he has spent much of his academic life studying. Last summer, for example, the Yorkshire-raised career diplomat completed an ambitious four-day hike from Mystras to Mani, in honour of the great travel writer Sir Patrick Leigh Fermor – a journey he says on his blog that he had longed to replicate ever since reading, Fermor’s “Mani: Travels in the Southern Peloponnese” as an undergraduate.

‘For me the serious pilgrim takes to his feet and measures the spiritual experience in real time, far from the car and the clock,’ he wrote afterwards. This Autumn, the Anglican Kittmer, who assumed office here in January 2013, also returned to one of his most revered parts of Greece, Athos, to sate a parallel interest in monasticism and Orthodox spirituality.

Like his fellow Philhellenes, Patrick Fermor and Lord Byron – whose famous portrait by Thomas Phillips hangs inside, in the drawing room – Mr Kittmer, 48, has brought to his role an entrenched passion for Greece and the “Greek condition”.

As a young man, he studied classics at Cambridge and Oxford Universities, then almost two decades later, Modern Greek studies at Kings College. Currently, Mr Kittmer, who is fluent in Greek, is competing a doctoral thesis at Kings on the celebrated Greek poet Yannis Ritsos

As he approaches the final year of his posting, the British Ambassador granted Athens Insider an exclusive interview about his enduring connection with Greece, and the unprecedented challenges he believes this country still faces:

Ambassador, your posting here comes at a uniquely testing juncture for Greece. Furthermore, you have had to carry out your diplomatic duties against a backdrop of intense media interest in Greece. How challenging has that been?

Of course, all my colleagues back in London are very much aware of the situation here. Everyone is being constantly bombarded, confronted, with so much information. Essentially, my role is to give a flavour to the Prime Minister David Cameron and his ministers, and to the Exchequer about what’s really happening in Greece and also to give them advice on how to best manage the relationship between our two countries. The thing about this crisis is, that it could have happened to any number of other Eurozone member states.

What have been the most pressing issues on your agenda throughout 2015?

The most pressing item this year has been dealing with Greece itself. I am actively involved in trying to understand the direction that Greece is currently taking, just as everybody else is. This relates across all areas: political reporting, economic reporting, interpreting Greece as a brand.

What are your hopes for Greece’s immediate future?

Now that we have had what is surely the last general election this year – fingers crossed! – we are hoping that there will be more stability and that the government will have more time to start thinking about how to sell Greece to international investors. And of course ambassadors have a role there. I have targets for British trading into Greece and we are always keen to attract investment from Greece into the UK.  Many people want to invest in Greece now – in its property and tourism. So selling Greece as a brand is very important. But at the moment, I feel that Greece isn’t really sure what its brand is.

With Greece hopefully nearing the end of recession, how are you working to further trade ties and investments with Britain?

We are making the classic sort of “pitch” that investors make: that the government needs to establish conditions for political stability, fiscal and regulatory stability, because investors need a degree of predictability. To know what sort of return they can expect to make. And if the goalposts are continually widening or narrowing, then you can’t properly do your due diligence.  This is difficult presently, because there’s a strong adjustment programme underway, causing and driving change. But it’s change which should liberalise the economy, and help trade inwardly and outwardly.

Does Greece still remain a favoured destination for British holidaymakers?

In all honesty, the UK has enjoyed robust growth now for over 3 years. Our economy is doing well.  For two years, we have had impressive growth in the British market into Greece, which has been increasingly popular despite the crisis. Competing destinations in the Mediterranean have had their own problems and the Greek travel market has become more competitively-priced finally. British people by and large have money in their pockets and can probably afford quite a nice holiday.

What kind of impact has living in Greece – and being immersed in the Greek lifestyle – had on you personally?

This is the sort of job that comes your way but once in a lifetime.  I always wanted to serve as a diplomat in Greece and I had hoped that if I played my cards right, when I was a doddery old guy in his late 50s or early 60s, it might happen. Then I got posted here in my 40s! I couldn’t ask for more. It’s been a difficult time for Greece and it pains me to see that.  Because I’ve seen Greece in times of growth, in times of confidence and prosperity. I really hope that over the next few years Greece returns to that feeling of confidence and positive forward-moving vision. And to a sense that the Greek people themselves can get themselves out of this situation.

And finally, Ambassador, what is the best perk of being stationed in Greece?

The weather! I returned to London in late 2002 – after being posted in Brussels for four years. By the end of 10 years, I had had enough of the “grinia” and “melancholia”, caused by the London climate. Here, we have the “liakatha” – the mellowness that the Mediterranean sunshine provokes.  And with that, comes the whole culture!

A Couple of Good Sports