A Couple of Good Sports 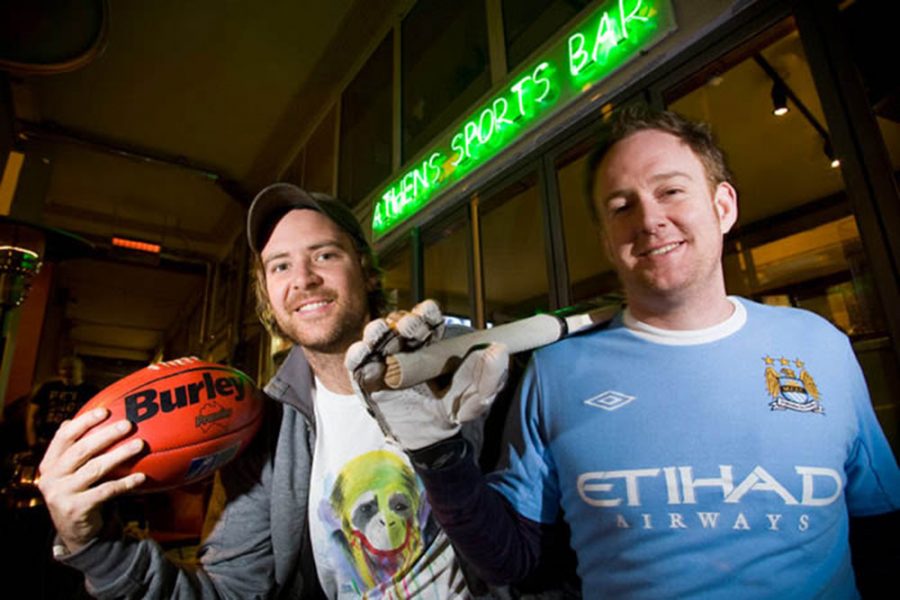 When Australia Day rolls around every January 26, every self-respecting Aussie in town knows there’s only one party to go to: The Australia Day bash at the Athens Sports Bar, run by Australian brother duo, Daniel and Ed Fisher.  The Fisher siblings, brothers also to Hollywood star Isla Fisher, have been in the business of selling fun in Athens since 2004. Their Australian-style backpacker and traveller’s village – comprised of the Sports Bar, Fish Café, and Athens Backpackers – has long been a hub for fun-loving expats across the capital. Dan Fisher talks hotel politics, Ghostbusters – and the saucy secrets of Studio 21!

What is it about Athens that attracted you and what keeps you here?

Athens always has been, and always will be, an exciting place to be. It’s the sense of freedom that people feel here. The sense that there aren’t too many rules and that you can free wheel a bit. Stay out as late as you like. You go somewhere like Rome and there’s an expectancy about what kind of experience you should have. You almost have to live up to the city, rather than the other way around. But in Athens, our travellers always have the most random experiences!

Can you give us an example?

Absolutely. We had an Australian guest come through once who was obsessed with Ghostbusters. He had the Ghostbusters hat, the jacket. He went out one night to Exharchia for a few beers and actually met up with Egon, the guy from Ghostbusters (played by Harold Ramis) and ended up drinking with him all night! That’s the magic of Athens.

Australians running businesses in Athens. Is it a very big club?

We do feel that we kind of blazed the way for Aussies running businesses here, especially in the bricks and mortar sector. Right from the beginning, we quickly became the default place to go for Aussie Greeks and people with any Aussie connection in Greece. They would gravitate towards the Sports Bar because we show all the major games.

Do Australians bring different business strengths to the table in Greece?

I think there’s a transparency and an honesty to how Australians do business that’s different to how maybe things happen here on the ground. We have an implicit desire, being Aussies, to kind of do things properly. To pay our taxes; to make sure all our staff get paid correctly; and that all their entitlements are taken care of.  We attract and retain good staff because of that. I think that’s a really Aussie mentality.

Has the budget market proved more recession-proof in recent times?

Greece is a fantastic product for the budget travel sector and for families. The families who were going to spend €180 on staying in the centre of Athens, find that they can get the same thing from us for only €80, so we’ve managed to attract the more prestige traveler who wants a good experience, but at a better price.

What’s the best part of your job?

That we are purely in the business of people having fun – and that’s something we take very seriously here. We’re not a business hotel so our guests are generally a lot more chilled.

And the worst part?

All we want is a stable political environment. We want to see Greece become great again.

Who parties harder? Australians or Greeks?

I think that the Aussies probably have the edge there for consumption, but not for keeping their sh*t together. Greeks have better form over all four quarters.  They have longevity.

Well, put it this way … if we do have a problem, it’s always Aussies.  I could tell you some stories about Aussie guests that are unbelievable. They are definitely the naughtiest guests! But also the most loveable.

Speaking of love, is it true that Athens Backpackers has kick-started many big romances?

A lot of people have met and fallen in love here. There’s been many holiday romances and weddings.  We get emails saying, “Thanks so much, I met my wife there”. We’ve had three engagements in room S21 alone. And two pregnancies!

Your sister (the Hollywood actress Isla Fisher) is a much-loved ambassador for Australia. Does she stay at the Backpackers while in town? Or is she more of a Grande Bretagne kind of gal?

My sister has stayed here many times with Sacha and the kids. This is her accommodation of choice! She stays in one of our two-bedroom apartments because of the kids. (Isla is married to the British comedian Sacha Baron Cohen and the couple has three young children, Olive, Elula, and Moses).

What does she think of Athens?

She and Sacha love Athens and they also love going down the coast (the Athenian Riviera). They spend loads of time at the beaches there. The city can be a bit harder for young families.

What industry trends have you noticed in recent years?

A lot more people want to go on a city holiday now and cook their own meals. It’s a huge shift that you can see emerging through air B&B and other parts of the share economy. People want to go somewhere and feel that they are having a unique experience and that they can cook and cater for themselves for around 15-20 per person per night.

How is Athens city centre changing?

I think it’s more real now. For awhile there, it was trying to be something it wasn’t. And it was overpriced. Athens has definitely become better value for money. There’s a sense of humility that’s come back to the city too. We’re seeing a lot more experimentation – street food, more international concepts, more variety. Instead of just doing the same thing everywhere.

What do you miss most about Australia?

I miss the sense of space and the sound of the ocean.

Finally, what does Australia Day mean to you?

Aussie Day is always about the same things, wherever you are living.  You’ve got to get together with a few good friends and have a few drinks and reflect a bit. We are living in a different culture and a different country, so it’s great to come back to your roots.