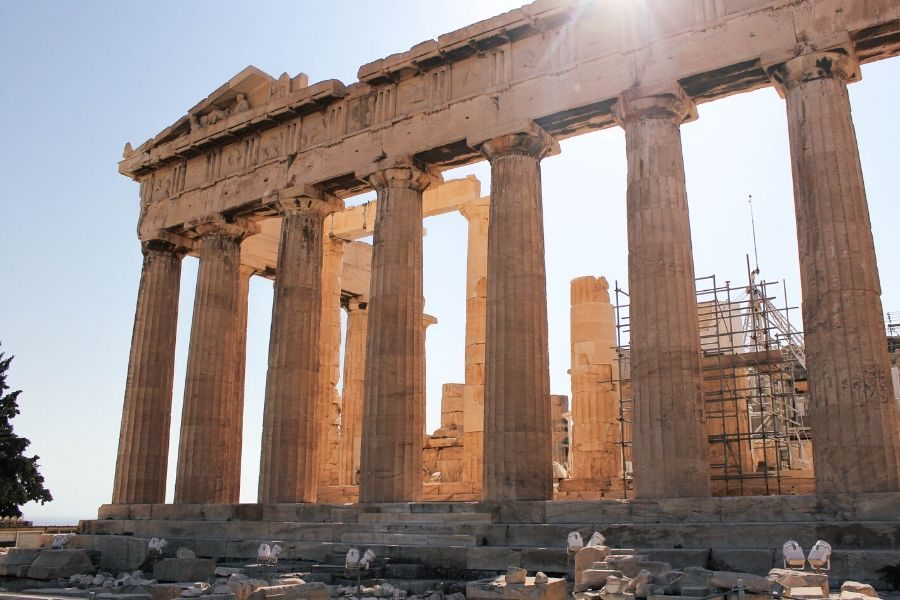 The Acropolis of Athens is a fair test of our commitment to humankind’s higher cultural aspirations. In ordinary times, Athenians have ten thousand good excuses to postpone the Acropolis until next month or next lifetime. These are not ordinary times. For an able-bodied resident of Athens not to take advantage of this opportunity is to fail that test. Brady Kiesling urges you to play tourist for a day.

To celebrate our wedding anniversary on May 19, my wife and I went up to the Acropolis the day after it reopened from the coronavirus shutdown. As we expected, without the cruise ships and bus tours, the place is magical again.

The grass was newly cut, the pathways swept, and even the ancient marble looked freshly scrubbed. Maybe this should have made it feel melancholy rather than magical. What need is there for the new social-distancing markers when you are alone in the ticket line, alone at the information panels, alone in confronting some of the most exquisite monuments ever built? 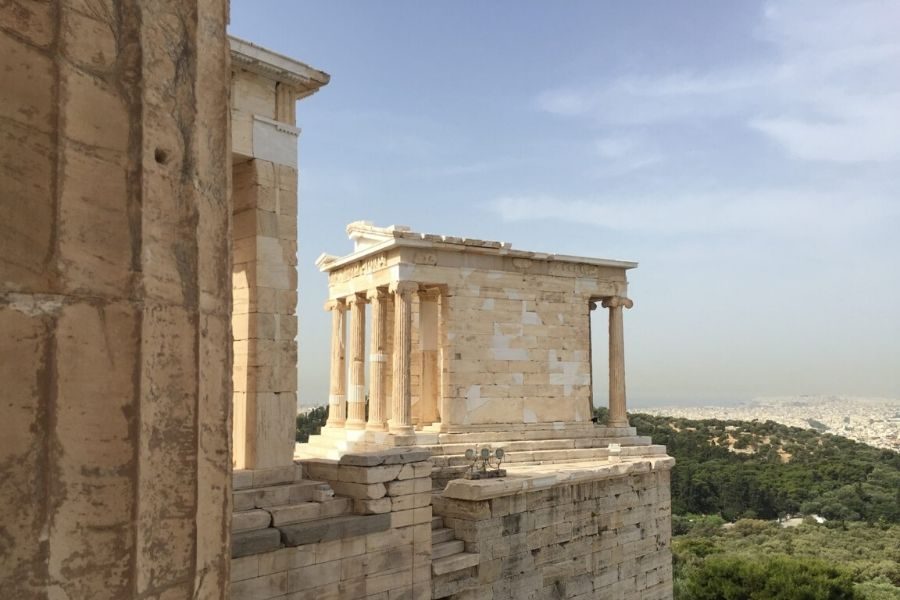 The coronavirus epidemic has done many terrible things, in Greece and around the world. It has also stripped away some of the nonsense. The Acropolis archaeological area is a rather grim factory in ordinary times. Harried staff are expected to process, with minimum damage to the antiquities, a daily procession of ten thousand pairs of feet and hands and a similar number of plastic beverage containers. Of those ten thousand, probably nine thousand were there only because it was one of those places people go. They photographed each other, not the monuments. People became the spectacle, even to dedicated classicists. 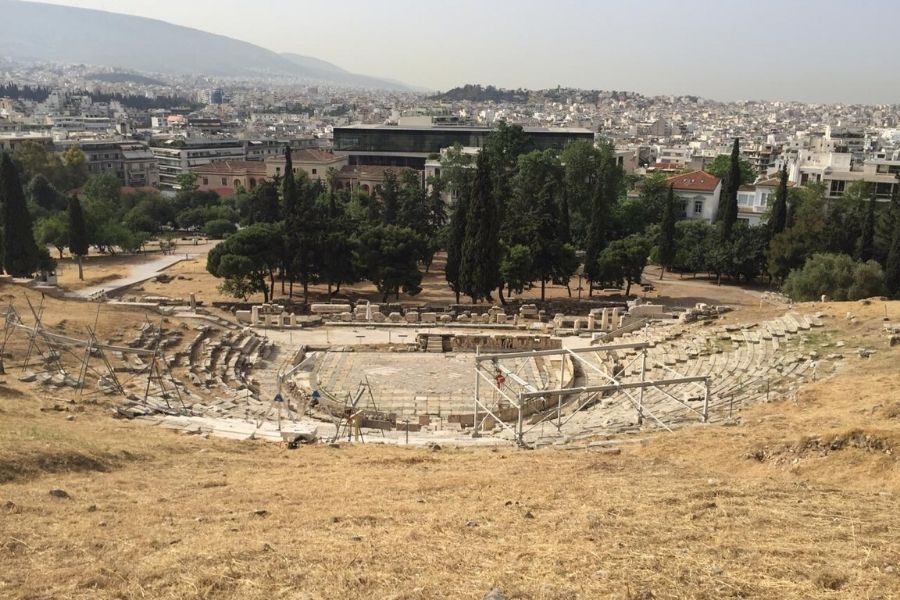 On this day, though, the guards and guides were not irritable jailers but instead our hosts, genuinely delighted that we and perhaps a dozen other visitors were there. Guarding and explaining the Acropolis once again felt like a sacred mission, as it had two millennia ago, as it should always. Likewise it became our duty, and our pleasure, to look at the Athenian past with fresh admiration. 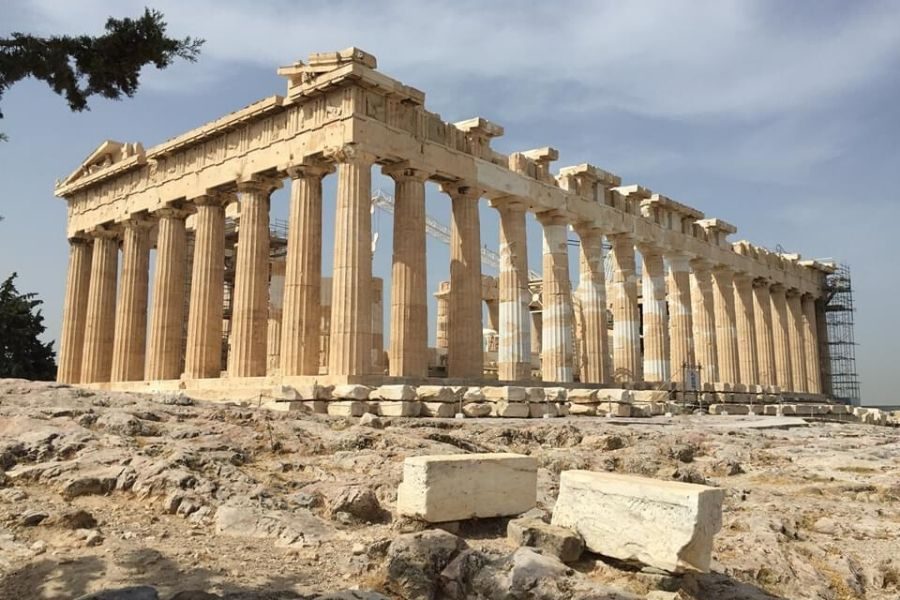 It seemed to me there were fewer areas roped off this time. I stood, probably for the first time since I was a student at the American School of Classical Studies in 1979, at the barely visible altar foundations in the Sanctuary of Dionsysos below the ancient theater. Indeed, the theater’s center line intersected the altar, just as pews align to the altar in a church. To watch ancient drama is to worship the god.

Standing alone at the Parthenon, we could take time to trace, without being trampled, the weathering marks of the gilded shields on the frieze, to notice the dowel holes for the gilded bronze letters that (very briefly) commemorated the emperor Nero and his local henchmen. More important, we could share for the first time in decades an ancient society’s yearning for permanence and magnificence, imagining the monuments rising from the sculpted bedrock. 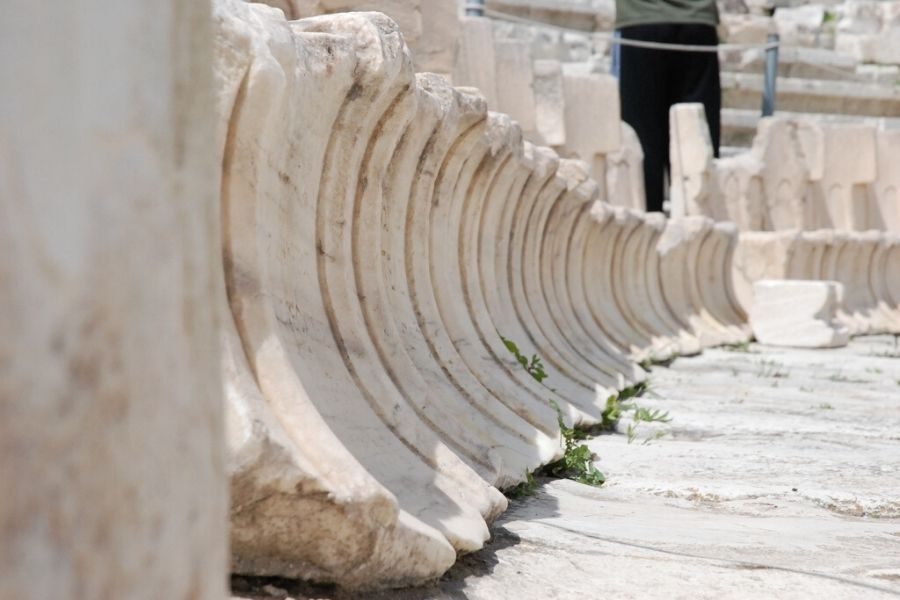 Yes, there are many steps to climb, and (again!) no functioning elevator, and the rock is slippery, so wear sensible shoes if you have them. And yes, it will be warm, so come early or late; and bright, so bring a hat and sunglasses; and hard to park, so bring a mask and take the spotless, empty, post-Covid Metro.

And yes, the ticket still costs €20 (€10 for EU seniors). But this fraction of the cost of your next romantic evening out – once such things resume — will buy you (plus any children you love), for the next month or two but never again, an experience only a tiny minority has been privileged to share. 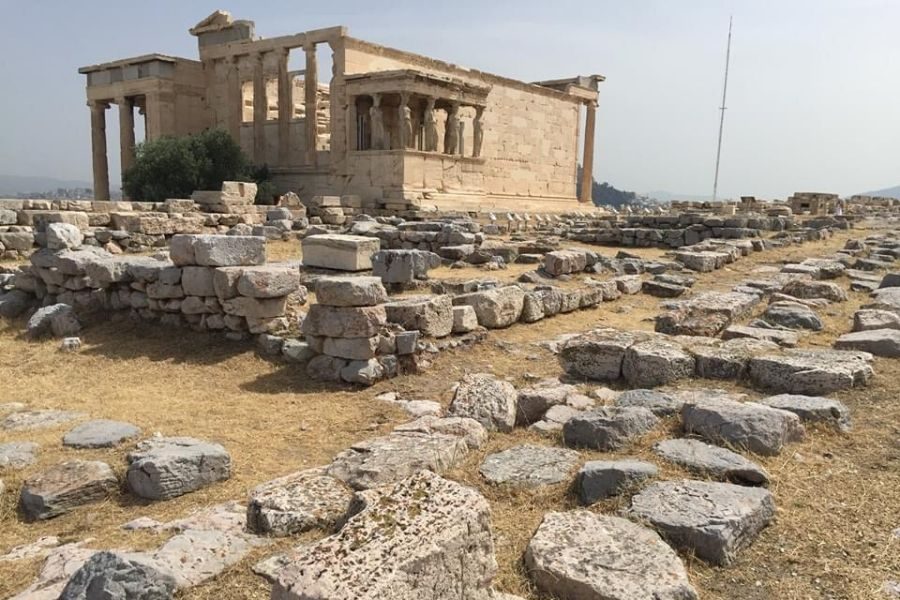 The Acropolis of Athens is a fair test of our commitment to humankind’s higher cultural aspirations. In ordinary times, Athenians have ten thousand good excuses to postpone the Acropolis until next month or next lifetime. These are not ordinary times. For an able-bodied resident of Athens not to take advantage of this opportunity is to fail that test.