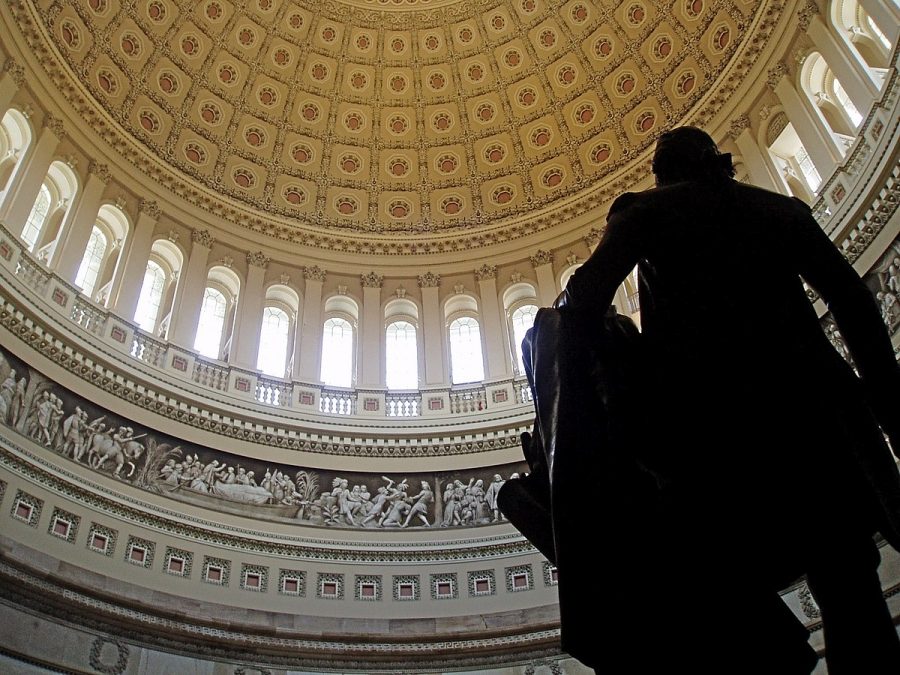 As 2021 dawns, our universal gaze has been fixed on the Capitol building. First, the horror show of insurrection; then the historic second impeachment of the US President. But as that majestic rotunda hoved into constant close-up, who among us knew that Washington’s answer to the Sistine Chapel was created by a Greek artist? ‘The Apotheosis of Washington’ was the magnum opus of Constantinos Broumidis and it took him 25 years to complete! 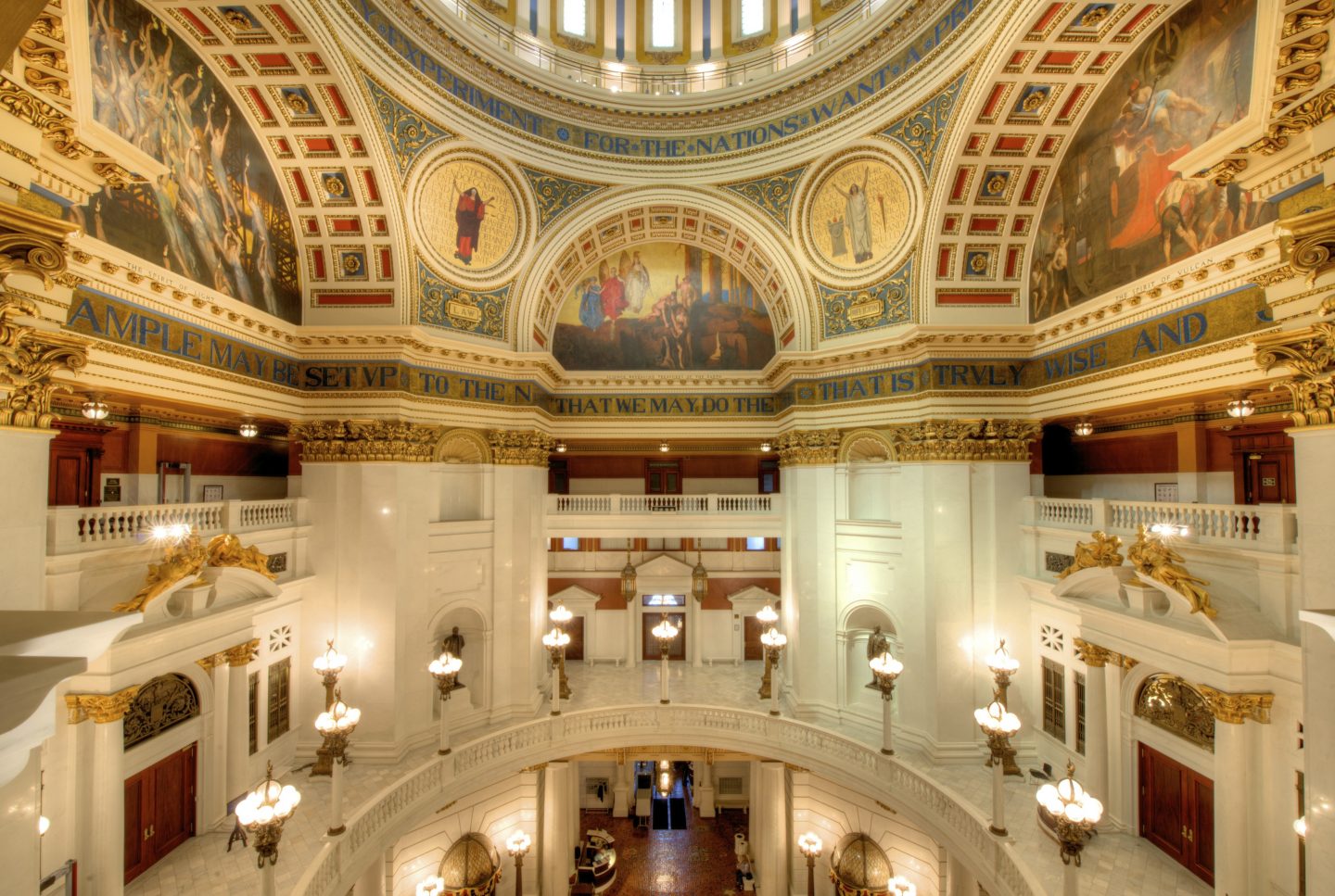 The world watched in horror as insurrectionists fueled by lies and conspiracy theories, stormed into the Capitol building. As the incredible images of the Capitol under siege being vandalized by Trump supporters were being absorbed by millions of viewers, it was the ugliness of the moment that contrasted starkly with the beauty of the ages. The creator of the amazing murals, Constantinos Broumidis (1805-1880), traces his roots to Messinia. His family had fled to Italy during the Orloffs in 1770 to avoid persecution by the Turks. Constantinos Broumidis was born in Rome in 1805 and at a young age showed his rare talent in painting. 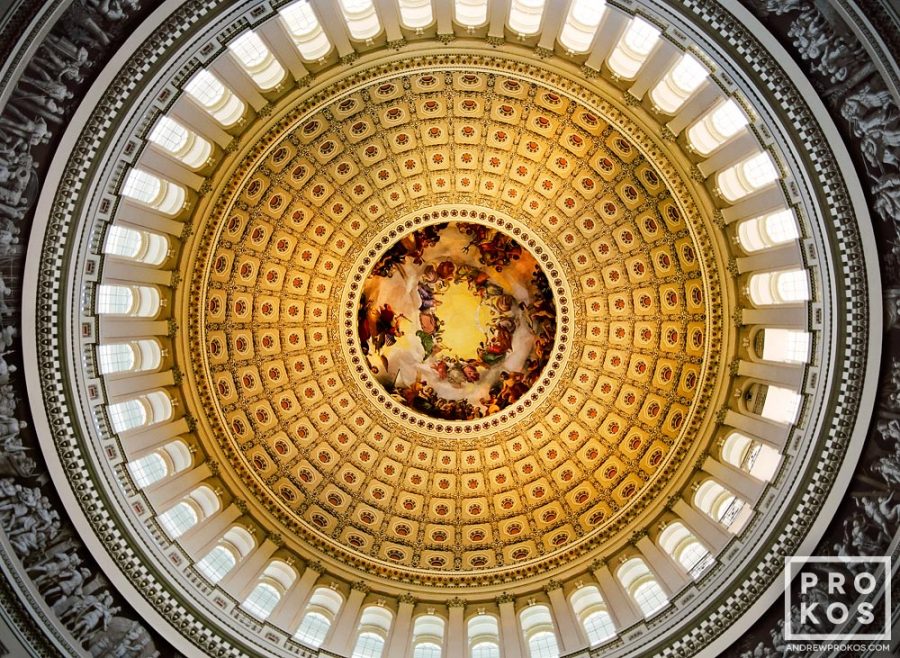 He apprenticed with distinguished painters and in 1852 emigrated to the United States, where he began painting icons in churches. In 1855 he was assigned the landscaping of the Capitol. Broumidis locked himself in the Capitol for 25 years to paint the interior of the Rotunda of the American Capitol, with obvious influences from the work of Raphael and Michaelangelos, but also from the romantic trends of his time. His most important work on the Capitol was his dome, which includes the colossal “Apotheosis of Washington” and the equally monumental frieze of “American History”, which houses allegorical representations of the history of the American nation. 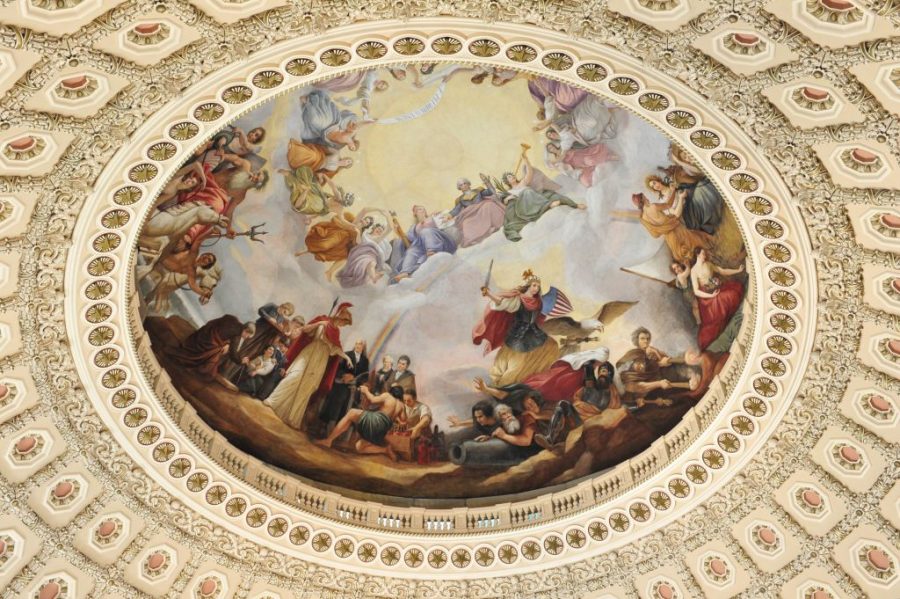 The impressive Rotunda was added to the Capitol building to create a harmony between the North and South extensions of the Capitol.   The sandstone walls of the Rotunda rise 48 feet above the floor. Everything above this line was added between 1855 and 1866 by Thomas U. Walter. Congress authorized the new high dome of fireproof cast iron to bring the center portion of the U.S. Capitol into harmony with the large new wings. 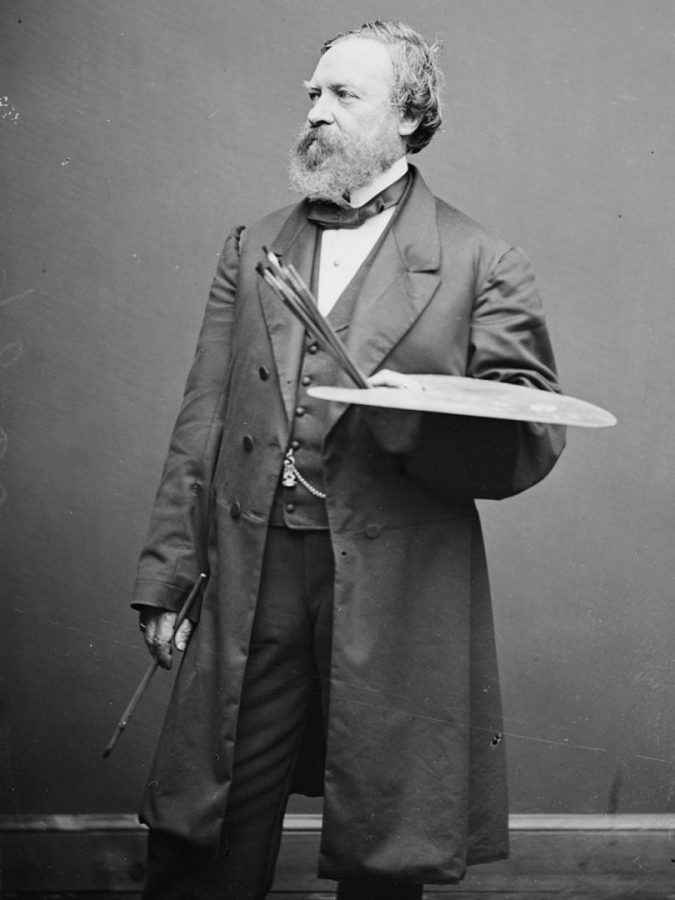 Walter’s 1859 section of the new dome and enlarged Rotunda showed a fresco in the canopy over the eye of the inner dome and a sculpted frieze at the base of the dome. Constantinos Broumidis painted The Apotheosis of Washington in true fresco on the canopy in 1865. The figures, up to 15 feet tall, were painted to be intelligible from close up as well as from 180 feet below. The frescoed frieze in the belt just below the 36 windows was painted to give the illusion of a sculpted relief. The scenes designed by Broumidi trace America’s history from its discovery by Columbus to the discovery of gold in California, with emphasis on Spanish explorers and the Revolutionary War.

Broumidi prepared a sketch for the frieze in 1859, but he was not authorized to begin work until 1877. The Apotheosis of Washington is inspired by Greek mythology and Washington is depicted in the sky, dressed in purple. To her right and left stand the goddesses Victory and Freedom, while she is surrounded by figures such as Athena, Hephaestus, Hermes and Demeter. Also, among others, among his works that stand out in the Capitol are the “Legislation” and the portrait of Benjamin Franklin in the Presidential Hall, but also the conversation between Christopher Columbus and Indiana. In the dome of the Capitol he has also painted the goddess Athena talking with Benjamin Franklin, with the inventor of the telegraph Morse and with the inventor of the first steamship Fulton, in an allegory of art and letters.

In total, he painted over 1,500 sq.m. The work in the dome will remain unfinished, despite the 25 years that the painter entered and left the Capitol, and this is because he was constantly assigned new and urgent works, such as the Presidential Hall and the corridors of the Senate, which will eventually become known, as “Broumidis Corridors”. Equally monumental were his performances of “Freedom and Unity” in the White House lobby. After Broumidi’s death in 1880, Filippo Costaggini was commissioned to complete the eight remaining scenes following Broumidi’s sketches. However, when the frieze was finished in 1889, a gap of over 31 feet remained. The frieze was finally completed by Allyn Cox in 1953 with scenes of the Civil War, the Spanish-American War, and the Birth of Aviation.

Constantinos Broumidis died poor and even his grave remained unseen for 72 years until it was “discovered” in 1952. Despite the great interest and resonance that his name enjoys today, Broumidis remained largely unknown and forgotten. The official guide of the Myrtle Capitol, Cheney Murdock, was the one who embarked on a gigantic campaign in the early 1950s to rekindle interest around Broumidis.Eventually, the Greek-Italian-American artist’s contribution was recognized by a law passed by Congress and signed by President George W. Bush on September 1, 2008, and he was posthumously awarded the Congressional Gold Medal. He received the nickname “Michaelangelos of the USA” from art critics.