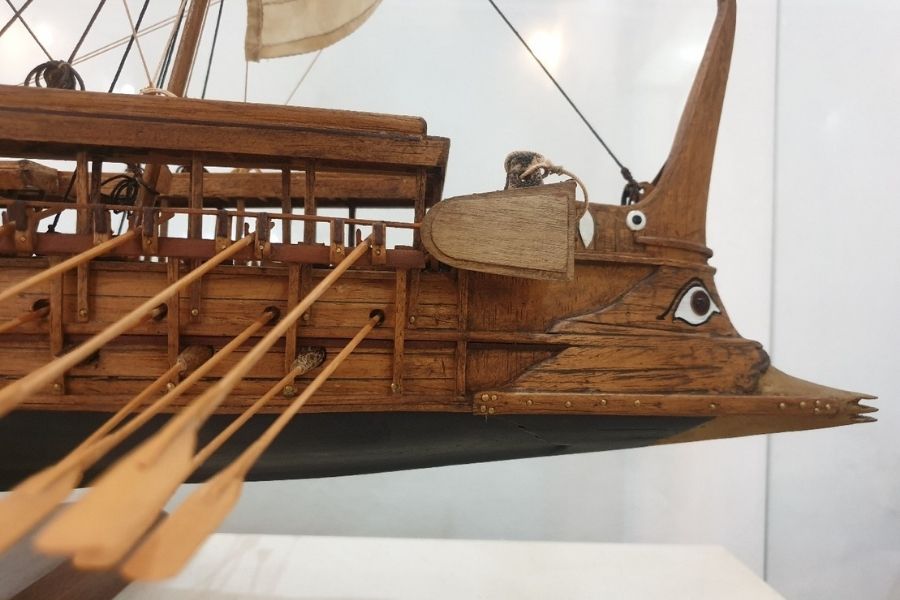 The Olympics, a replica of an Athenian trio built between 1985 and 1987. During the classical period, the crew of these combat galleries consisted of 200 people.

It was ravaged by the Persians before Pericles revived its former splendor. Socrates walked through its ancient alleys. Later, Salamina would fall to Ottoman domination, a Venetian bombing, and Nazi occupation. And yet, this stoic island right on Athens’ doorstep remains the capital of an eternal Greece.

Yet despite its longstanding and arduous torments, Salamina remains the capital of an eternal Greece. To better understand the past of our magnificent city, Athens Insider reproduces a series of 10 articles about the history of Athens, written by Irina de Chikoff for Le Figaro.

Confident of the superiority of his fleet, the Persian King Xerxes allows himself to be drawn into the Strait of Salamis.

Themistocles need only close his trap…

An evil smile floats on Xerxes’ lips when he contemplates the burning Acropolis. He has just avenged Darius, his father, who had been defeated at Marathon. The temples are now on the ground, and the statues of the gods have been stripped. The sanctuary of Athena, protector of the city, was desecrated and now Xerxes savors his vengeance – although it would have been complete if the Athenians had not abandoned their city to entrench themselves on the island of Salamis.

While Xerxes was feasting his eyes on the fire, an unknown man came to warn him that the Greek fleet in front of Salamis, commanded by Themistocles, was about to slip away. The Persian armada is anchored in Phalèrion harbor. Xerxes, unaware of the informer, ordered his boats to sail towards the enemy’s triremes.

He is nicknamed ‘Ulysses’ because, like the “man of a thousand turns”, Themistocles is bestowed with the mètis, a cunning intelligence. He sent his slave to Xerxes, suspecting that the King of kings would fall into his trap.

Themistocles wants to lure the son of Darius into the narrow pass that separates Salamis from the Attica coast. The Persian fleet is composed of heavy ships that will have difficulty deploying in this channel. The Greek triremes will take the opportunity to ram into them, a technique the Athenians have now mastered. They also have another advantage over their opponents – they know these parts well; the winds that blow at this time of the year, the direction of the currents.

Since Marathon, where he had fought under the orders of Miltiades, Themistocles had been convinced that the Persians would return, and that Athens could only win a decisive victory upon the sea. Thus in 483 B.C., the Archon succeeded in convincing the People’s Assembly to devote the revenues from the silver mines of Laurion to the building of a war fleet.

(caption of the picture) The Olympias, a replica of an Athenian trireme built between 1985 and 1987. In the classical period, the crew of these combat galleys consisted of 200 people. 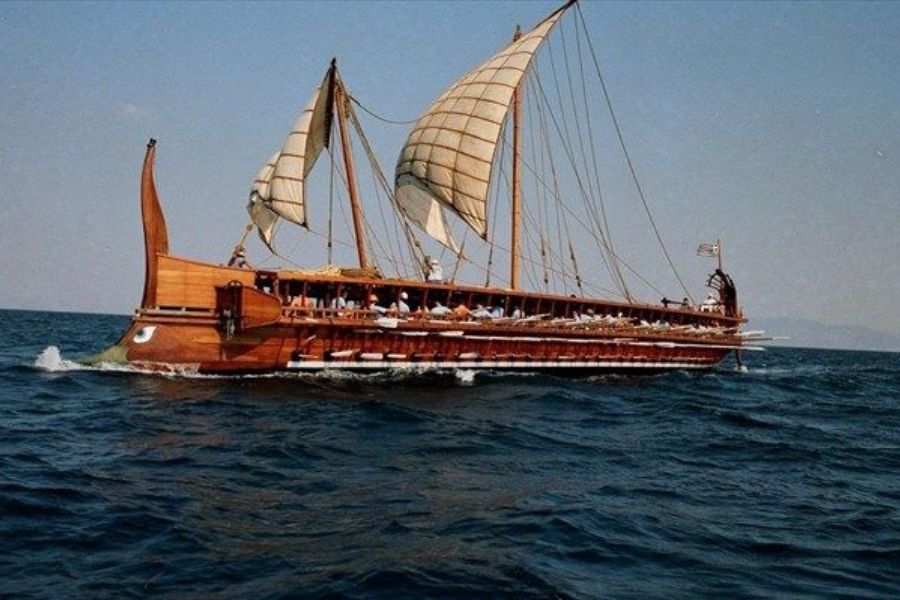 At dawn, on the 29th September, 480 BC, Xerxes imposed his throne on the slopes of Mount Aigaleos, which dominates the strait where the battle will be fought. He does not want to miss anything of the confrontation in which his fleet will force the enemy down. Around him, his court is babbling in excitement.

As for the Greeks, they sing the pean, “Go, Son of Greece!” As Themistocles had predicted, the Persian armada disembarks quickly as the wind rises. Not only do the boats get in each other’s way, but they all want to shine before the king’s eyes, and their haste adds to the confusion.

The Greek triremes are pointed on to their opponents. The unsteady Persian archers miss their target. Suddenly, a sauve qui peut – the admiral of the Persian fleet, a half-brother of Xerxes, has been pierced by a javelin.

On the slopes of Mount Aigaleos, the King of kings has disappeared, abandoning his throne. However, the Athenians do not yet claim victory. They will not do so until they learn that Xerxes is on his way to Hellespont.

Themistocles celebrates the height of his glory, and he works to restore Athens. He fortifies the city and its bridge, insisting that the Ecclesia agree to erect the Long Walls that protect the road between them and make Athens a single fortified whole, like an island.

Cimon, the son of Miltiades, will send triremes again during the land battle victory of the Greeks over the Persians the following year in Plataea, under the pretext of continuing the war in Asia. This ensures the knowledge of Athens’s conquest of an empire, radiates all around the Aegean.

Eight years after the battle of Salamis, Aeschylus will revive the victory at the Theater of Dionysus on the slopes of the Acropolis. The author fought in Salamis and remained deeply marked by it. This play leaves the legendary past behind to exalt the national patriotism of a free people – whose laws developed over the centuries by Dracon, Solon the Wise and Clisthenes – established an unprecedented regime: democracy.

The Athenians are proud to fulfill its tenets by serving their country. They celebrate it on the occasion of the city’s Great Dionysia festival in 472 BC, where young men inaugurate themselves into public life, and Pericles, coming from a prestigious line of eupatrides, serves as choregos in the choir of the play, The Persians.

Based on the series of 10 articles written by Irina de Chikoff for the Figaro Hors Série. Read more: https://boutique.lefigaro.fr/produit/129563-athenes-eternelle