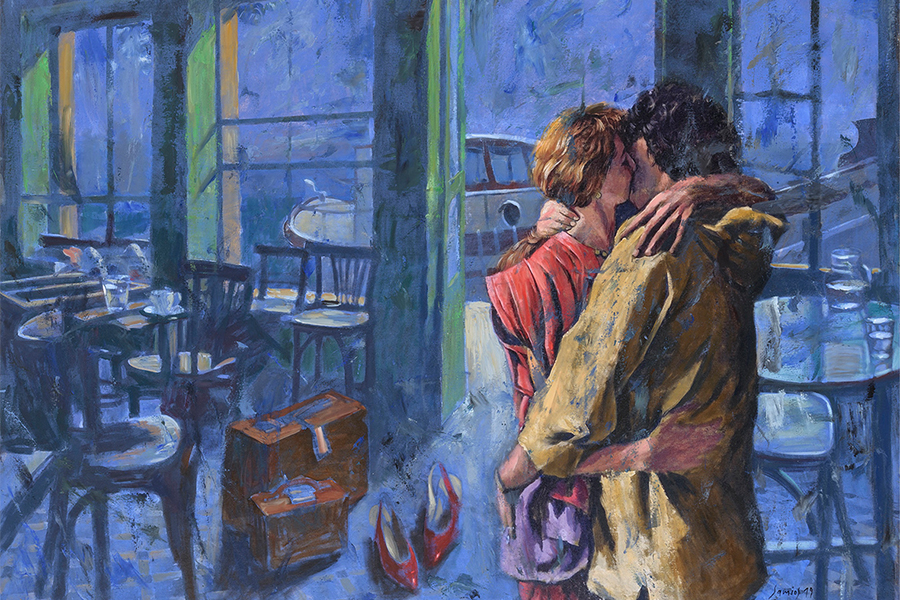 WHAT: In his latest series of paintings, Samios welcomes us to the traditional kafeneio (Greek café) with its marble-topped tables and shiny mirrors. Here, the painter has returned to a carefree time, as well as an era of personal distinction. In the early 1980s, he was introduced to the metropolis of Paris through a series of cafés, at a time, much different to now.

A new type of social behaviour has emerged in our current reality. Public interactions must, for a long and yet undefined time ahead, comply with specific rules of coexistence.

However, people will never stop seeking the physicality, the aura, gestures, or gazes of other human beings – without the mediation of a screen. The thing that reassures us when everything around us feels threatening is other people, and most of all, our ‘own’ people. Like a concept of a haven – a sea that you slip into, where you float on your back, with the sun on your face, threatened by nothing.

At the Skoufa Gallery, Samios sets up a place of familiarity, like those he came to know in the Athenian and Parisian cafés.

“The café was a temple”, he tells me, in the context of a ‘refuge’, attempting to capture its sense of it being a type of ‘paradise’ in a painting; not irrevocably lost. The theme of the kafeneio/café draws its inspiration from a place that no longer exists.

About ten years ago at Attiki Square, near the painter’s studio, there was a café called “O Paradeisos” (Paradise).

“It was the local hangout of a neighbourhood that drew very mixed crowds – labourers, old men, pimps. A crowd that, from the outside, shared nothing in common, but we all communed there. The old man who ran it died, and now there is a pharmacy in its place,” the creator says. He recognises that the familiar space of the kafeneio, the ‘hangout’, was strangely healing for its patrons.

In that cathartic space, people connected through everyday things. From chatting about football to discussing more serious political issues, often intermingled with the sound of di rolling during an eternal game of cards, and not so audible, the “suppressed desires; neurotic dreams; confessions of the day, the night a whole lifetime… Even the sharing of silence had its meaning”.