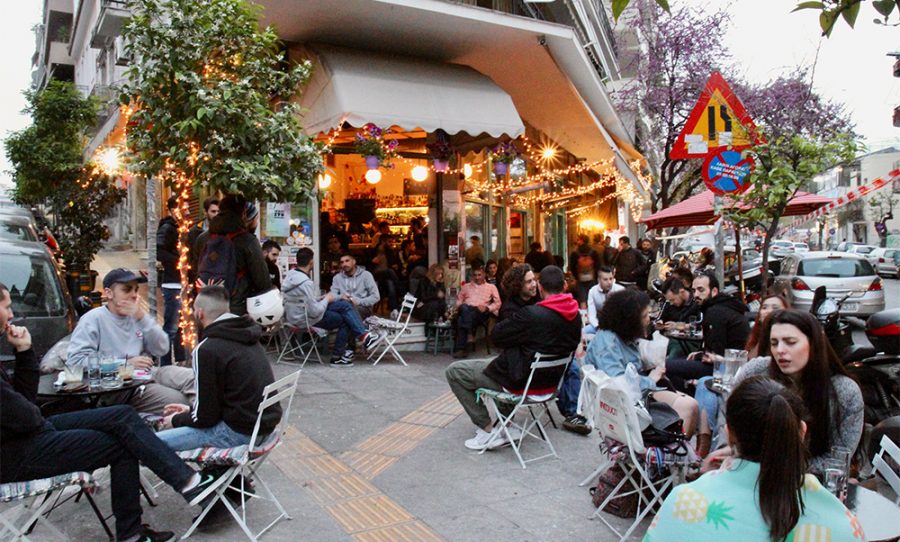 New resident of the Pangrati neighbourhood, Will Feuer, takes you inside this up-and-coming creative stronghold that’s filled with traditional cafés, creative bars and age-old parks.

Surely all visitors to Athens take the stroll from Syntagma Square to Kalimarmaro Stadium, but few know that just beyond the stadium lies one of Athens’ most original neighbourhoods. And we hope they never find it, lest Pangrati loses its charm.

Far enough removed that tourists don’t wander here, Pangrati is filled with locals going about their daily lives. Modern office spaces and boutique clothing stores collide with decades-old cafés and restaurants that double as traditional bouzouki venues. Not to mention it is home to a number of Athens’ best natural spots including running trails that overlook the city, Athens’ first cemetery and Alsos Park. In recent years, rent prices have plummeted since the economic crisis, creating an opportunity for daring restaurants, bars and art galleries to swoop in, breathing new life into now trendy Pangrati. It is here that one witnesses the struggle of Greece to negotiate its ancient past with a modern future.

The first study-abroad program in Greece for English-speaking undergraduate students, College Year in Athens (CYA), was established in 1962 in Pangrati, right next to the stadium. For the past five decades, CYA has brought thousands of American students to the neighbourhood who live among and with locals, creating a truly cosmopolitan feel. Of course, this also means Irish pubs, Asian street food and Dominoes are readily available in the area.

Tune-in to the Real Pulse of Athens 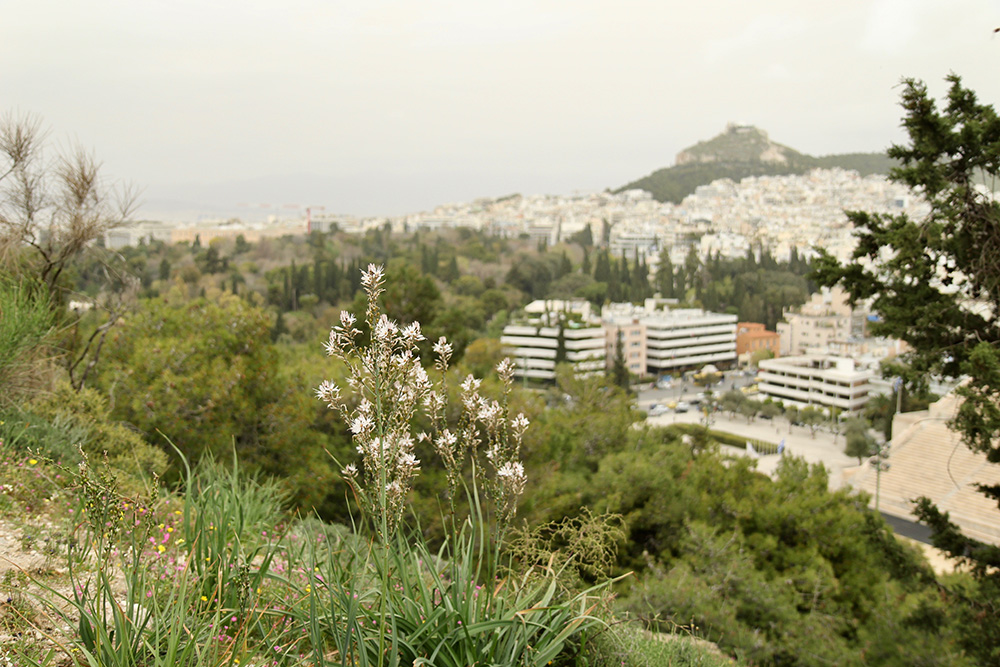 Visitors are rewarded with the feeling of having stumbled upon a neighbourhood as green as Athens’ outer suburbs, as eclectic in style as downtown and, most of all, with a genuinely authentic Athenian pulse.

Front and center of Pangrati is the unmistakable Panathenaic stadium, also known as Kalimarmaro, or literally “good marble,” stadium. It is the only stadium in the world built entirely of marble. The Panathenaic stadium, though reconstructed for the first modern Olympics in 1896, is the site of the ancient Panathanaic games, a grandiose display of ancient Athenian wealth, athletic prowess and cultural excellence. While beneath the stadium is a museum commemorating each modern Olympic competition, at the top of the stadium, you’ll encounter a wonderful view overlooking the city. 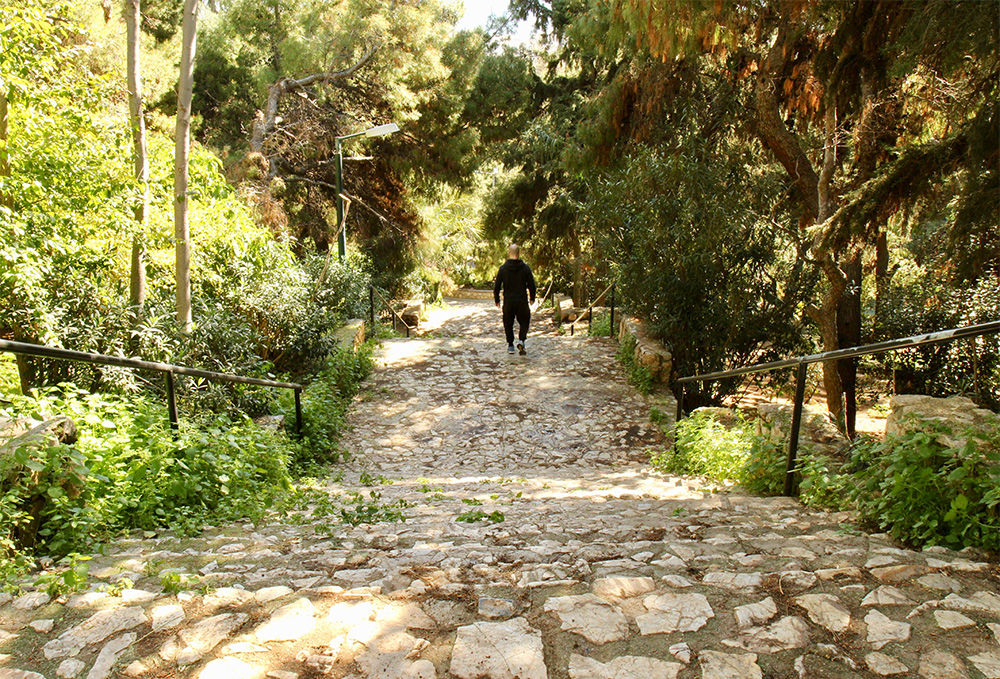 If you want a truly local twist, head behind the stadium to Kleitomachou street to slip through the fence and find a labyrinth of running trails filled with locals both behind the stadium and adjacent to it on a large wooded hill. Hike to the top for one of the best views in Athens, overlooking the stadium, the national gardens, the Parthenon and Lycabettus hill. From this vantage point, the serenity of ancient Athens is on full display above the bustling scurry of the modern metropolis.

Created in 1908 at the intersection of Eftyxidou and Spyrou Merkouri Streets, Alsos Park was created by locals who decided to plant a number of pine trees in the area. It wasn’t until twenty years later that the municipality of Athens would assume responsibility for the space. It once held a small zoo and a theatre with free performances for the community. Today, it is a gorgeous garden, mainly used as a gathering ground for backgammon players. 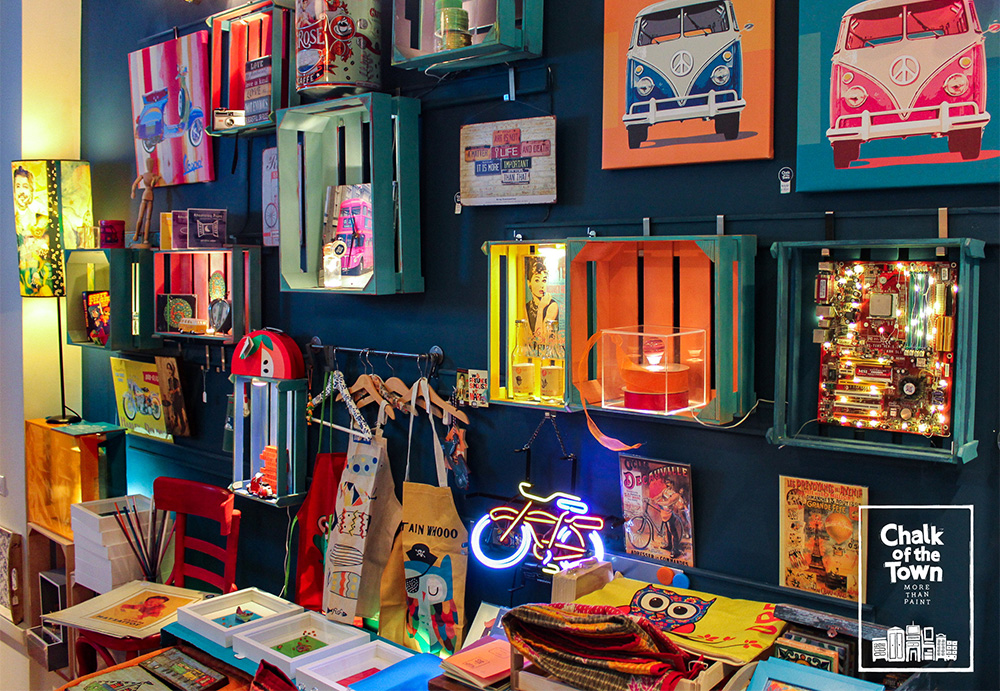 Chalk of the Town

For those with their minds on Modern Greek culture, there is no shortage of choices in Pangrati. A cosy, two-room gallery on Vasileos Konstantinou Avenue, Art Zone 42 has consistently impressed visitors with its thought-provoking exhibits and artist discussions since its establishment in 2007.

Looking for a more hands-on experience? Chalk of the Town offers in-house workshops to teach styles and encourage creativity. They also sell artisanal chalk, paint and professional stencils for those set on doing it themselves. 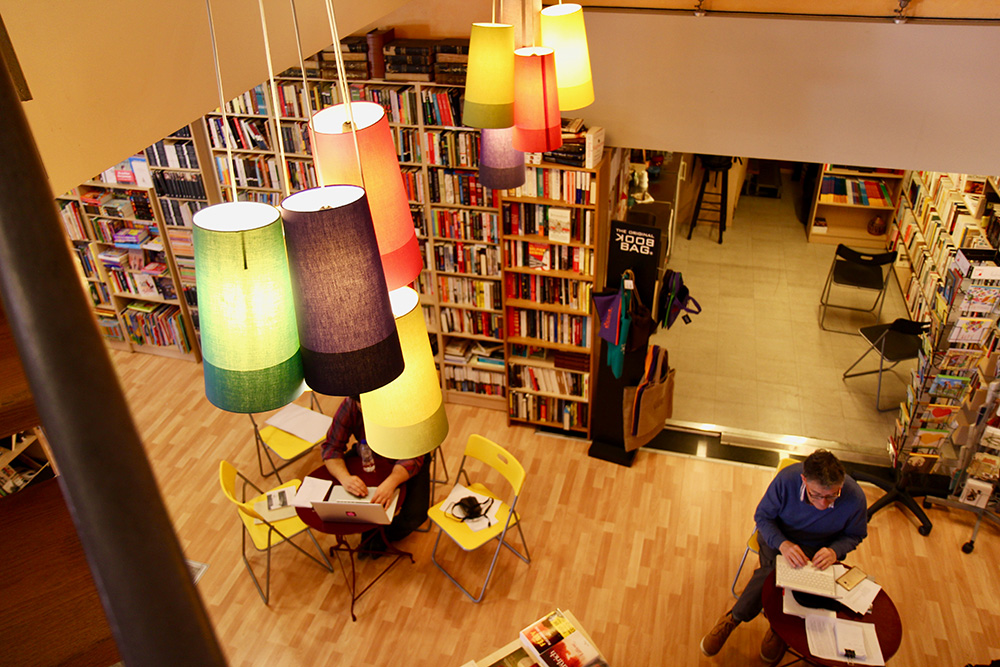 And just behind Art Zone 42 rests one of Pangrati’s most flourishing areas, Proskopon Square, or literally “Scout’s” Square. There’s no shortage of cafés and tavernas here. Settle in with a book during the day at No Name café and watch the kids play football. At night, grab a drink from any of the surrounding bars and join the rest of Pangrati in the center of the square for a raucous time. Proskopon Square also lays claim to Lexikopoleio, one of the best bookstores in Athens, brimming over with texts of many languages. Of course you’ll find plenty of Greek literature here, but also the latest releases from around the world, along with an abundance of children’s books.

A Suburb of Gastronomic Proportions 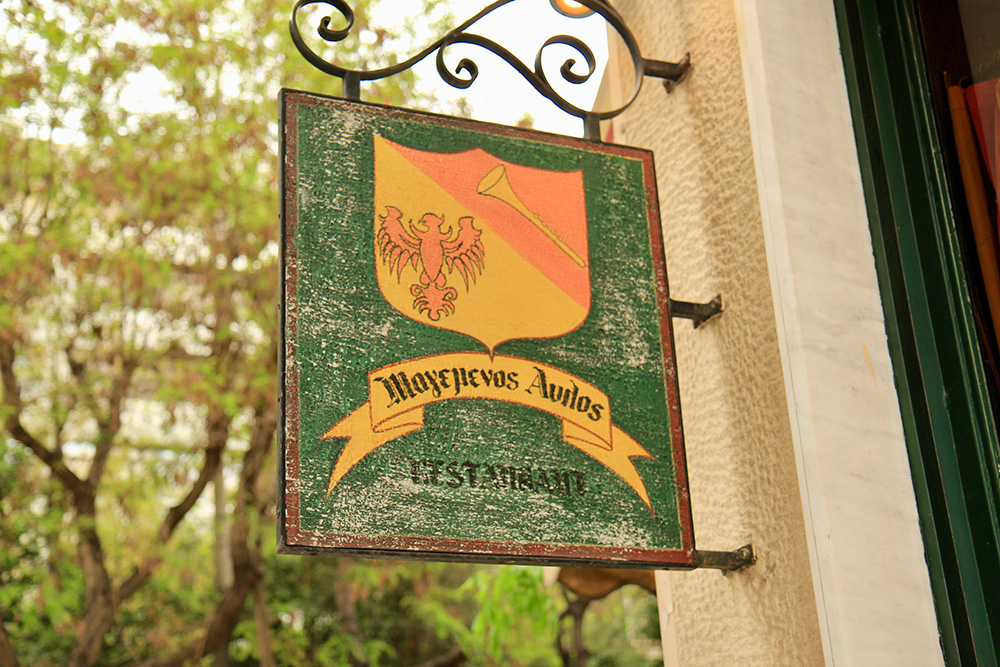 Meanwhile, Scout’s Square is also home to one of the primary cultural institutions of Athens: The Magic Flute Restaurant, or Magemenos Avlos. The taverna looks, I’m told, as it did in its heyday of the 1960s when famous Greek politicians, writers and artists came here almost daily. A delicious dinner is always served with a show where the house singer takes the stage with her band to the delight of all the regulars. On Sunday evenings, they serve an all-you-can-eat buffet for 22 euros. It is a nostalgic environment of dimly lit candles and wine-induced “Opas”!

For those looking to relax among tree-lined cafés, there are temptations on every corner of Pangrati. Head up to Empedokleous Street by the central Varnava Square to enter a portal to the past, Superfly Café. Inside, one will find retro galore, from pinball machines and board games to an antique train circling the bar. Like so many of the Pangrati cafés, Superfly transforms from relaxed café to lively bar as the sun falls out of sight. 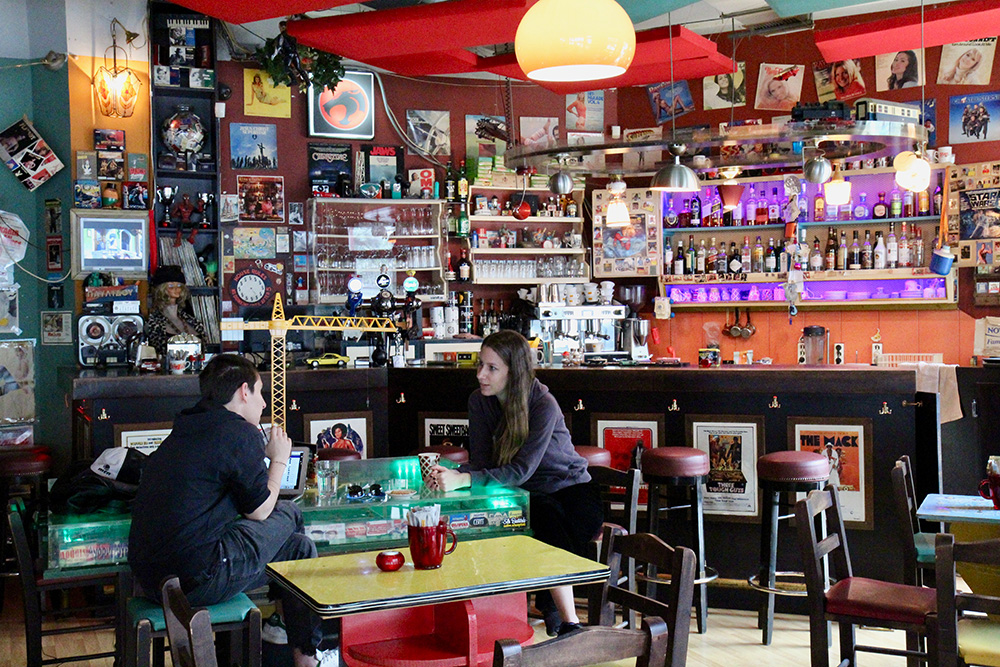 Another homely spot is Pournarousa Kafeneio on Effranoros Street. Decked out in carved wooden chairs, a sleek bar and framed copies of contemporary art, this is a sophisticated place to grab a coffee and get to work or relax with a beer. Of course Niko and his archaic beard tops off the intellectual vibes here and makes everyone feel at home!

Head over to Kekkos on Eratosthenous street next to the stadium for a warm welcome to the neighbourhood. Established in 1963, this family-owned spot is a neighbourhood hit, serving up an array of homemade meals, ready to go sandwiches and plenty of sweets. It’s no wonder they’ve attracted an extended family of friendly regulars who linger until closing. But the true gem here is the people who run the place, Demetrios and Kristina!

One consequence of Pangrati’s rich history is a strong presence of Kafenions. These are traditional Greek hangouts where elderly men typically drink, chat, gamble and enjoy life the way Zorba the Greek would! While not officially banned, women will typically not be found here. This is a remnant of truly traditional Greek life. 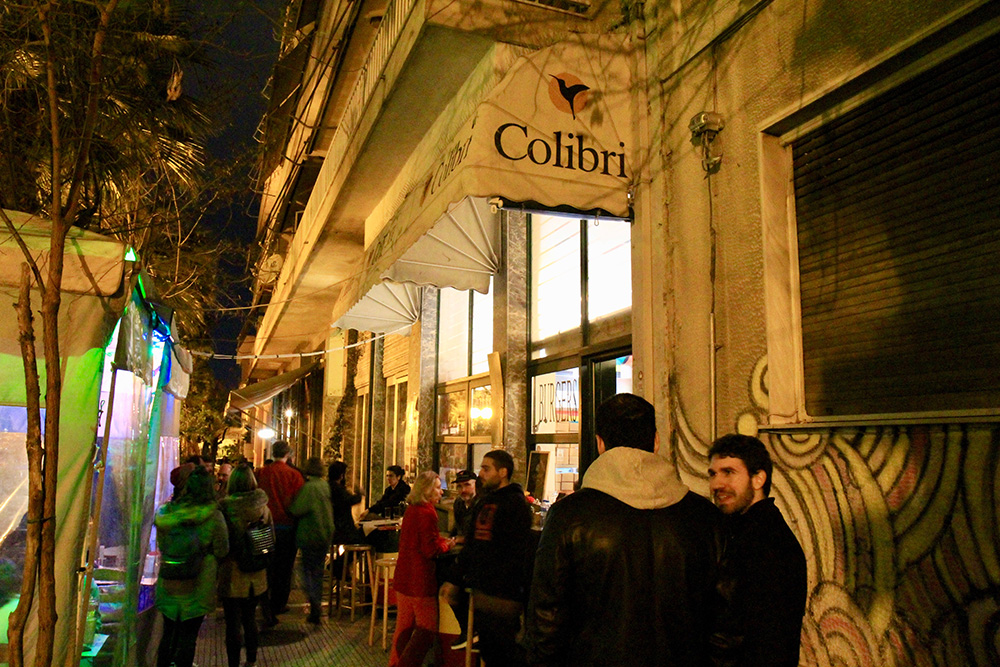 Fear not! Pangrati is not all culture and cafés. Almost all of the cafés in the area, like Superfly, turn to bars at night; chief among them is none other than Chelsea Hotel, one of the best pubs in Pagrati, and historically the drinking den of many writers, musicians, artists and actors. Dreadlocked heads, blacked out clothes funky glasses and hats, Chelsea’s brings all types together. Blasting an all-night amalgam of music from hip-hop to jazz, Chelsea’s has earned the chagrin of its neighbors. Almost every night it’s so packed that guests spill over into the street until the wee hours of the morning, only to sit down with a coffee at the same table as the sun rises.  Stop by to try their home-brewed raki! 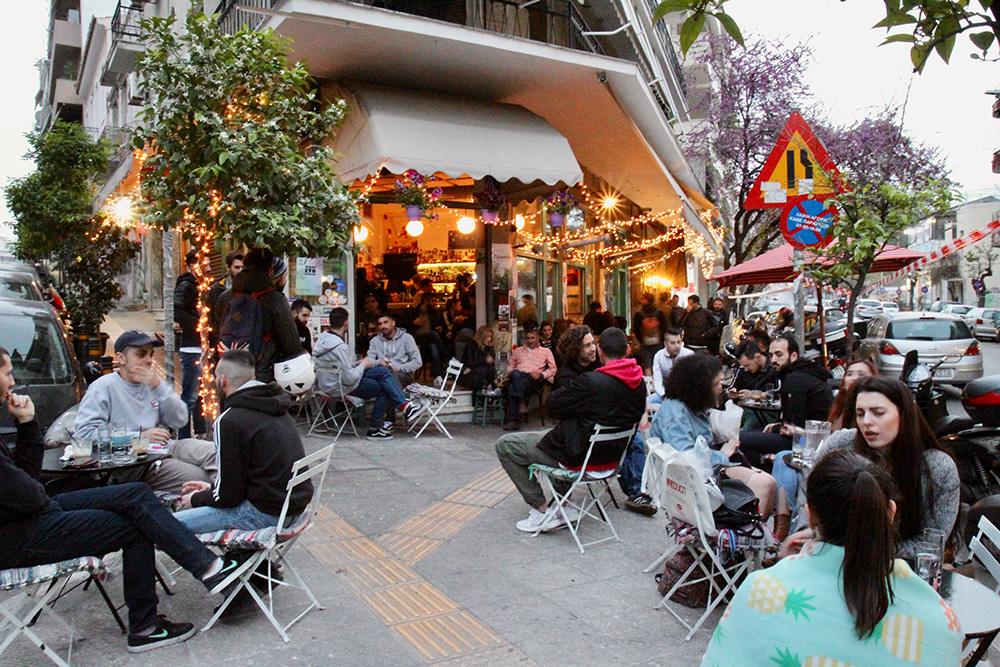 And if you find yourself a bit peckish, right next-door is what may be the best souvlaki in Athens, (it almost certainly has the best fries) – Elvis. Decked out with pictures of the famous American rocker, and even one chef who fashions his hair after the original greaser, Elvis works in tandem with Chelsea’s bringing Plastira Square to life, day and night. 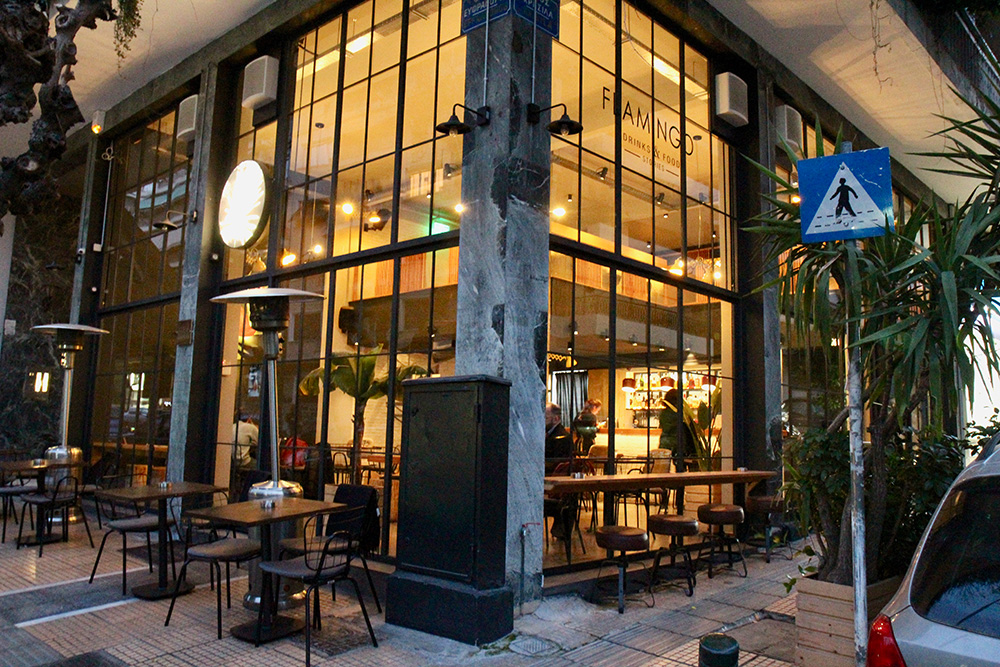 With the recent rise of the neighbourhood, a few new bars have popped up as well. Flamingo, with its unmistakable pink neon flamingo sign, opened up a year ago on Effranoros Street in a newly constructed corner building with industrial vibes and floor to ceiling windows. For those willing to shell out some more cash, Flamingo serves up tasty cocktails all day, and a savoury brunch in the mornings. 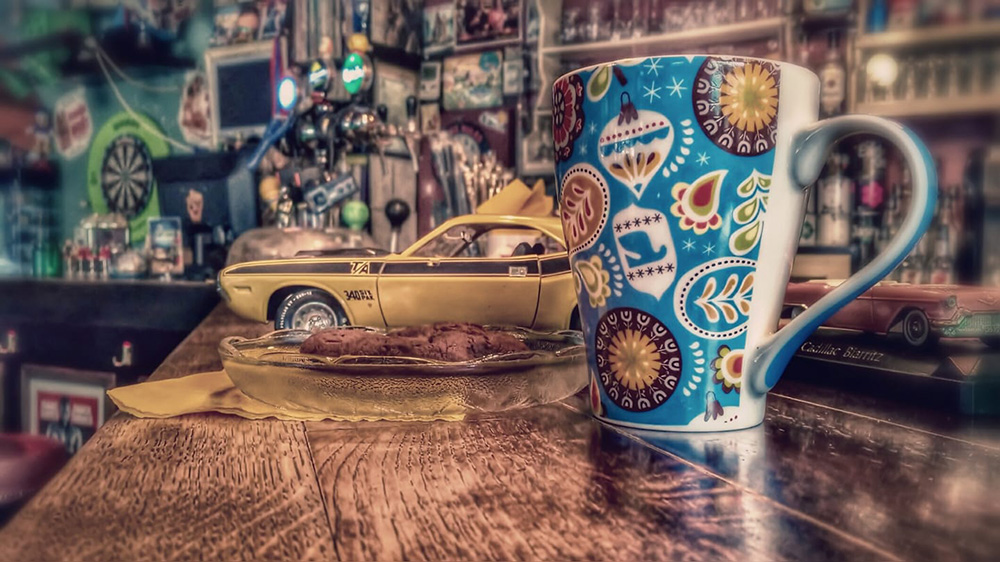 Continue up the street to Profitou Ilia Square on busy Ymittou Street and arrive at Monsieur Cannibale, a decadent French-style brasserie overlooked by a towering church at the religious and cultural heart of Pangrati. Arrive early in the morning for a coffee or late at night for some flavorful cocktails and company. Monsieur Cannibale serves up pizzas, salads, paninis, bagels and pastries all prepared in-house, and 11:00 – 17:00 on the weekends they rock a mean brunch that includes fried eggs in focaccia Greco, jacket potatoes with bacon, steak eggs and pastrami calf. 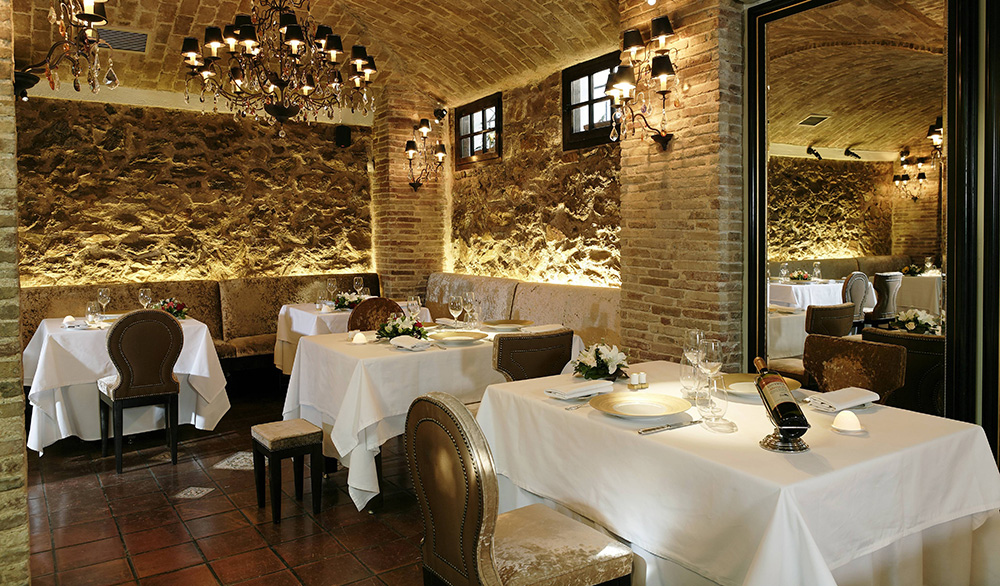 But really it’s the food that stands above all else in Pangrati. At the top of the list is undoubtedly Greece’s first two-Michelin starred restaurant, Spondi, located on Pyrronos Street by Varnava Square. Established in 1996, Spondi remains in Pangrati and is considered one of, if not the, best restaurants in Greece. There is an elegant courtyard for warm nights, and the interior is surrounded by stone walls with smart lighting. The menu is a blend of French and Mediterennean cuisine conjured up seasonally by master chef Angelos Lantos. 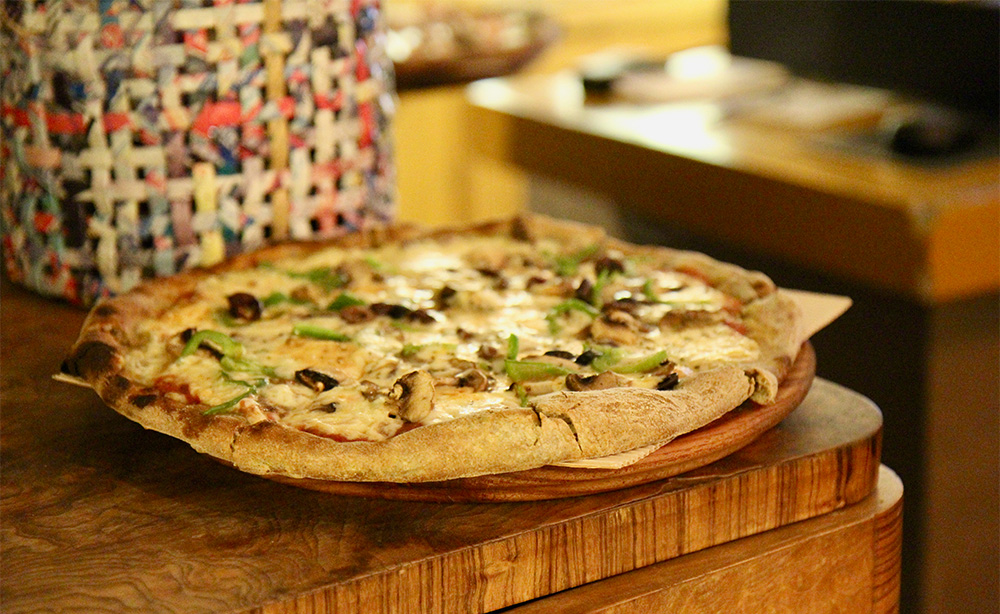 For a more laid back and cheaper feel, Pangrati offers some fantastic burgers and pizza as well. Mystic Pizza offers a diverse selection of pizza pies from anchovies and capers to the more Greek olives and feta.  They prioritise health and have strong choices for vegetarians and vegans in a country that is notoriously carnivorous.

Then on busy Empedokleous Street, filled with bar-cafes, rests Colibri, an Athenian’s best shot at getting an American-grade burger. From classic to barbecue and even Hawaiian style, Colibri offers plenty of options, and none will disappoint. With a small space and limited seating, there might be a wait, but don’t worry. You can sit at the next-door bar and sip on a cold one while awaiting your order.

If Pangrati’s recent evolution is any indication of the future, it will be a prime neighbourhood for years to come. I only hope it doesn’t change too much as there is little room for improvement in this simultaneously energetic and peaceful pocket of Athens. 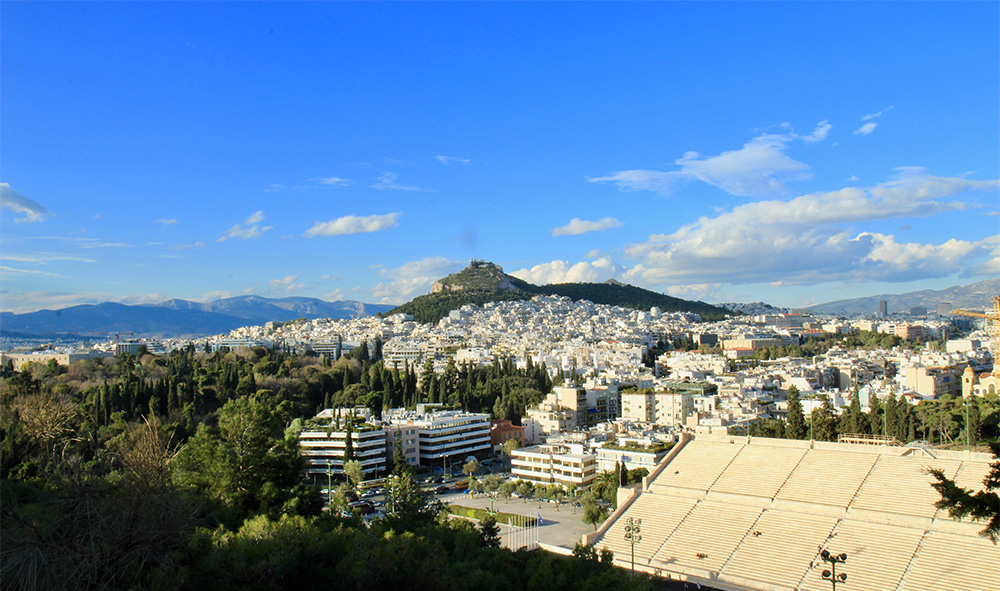 6 Great Outings for Teenagers in Athens