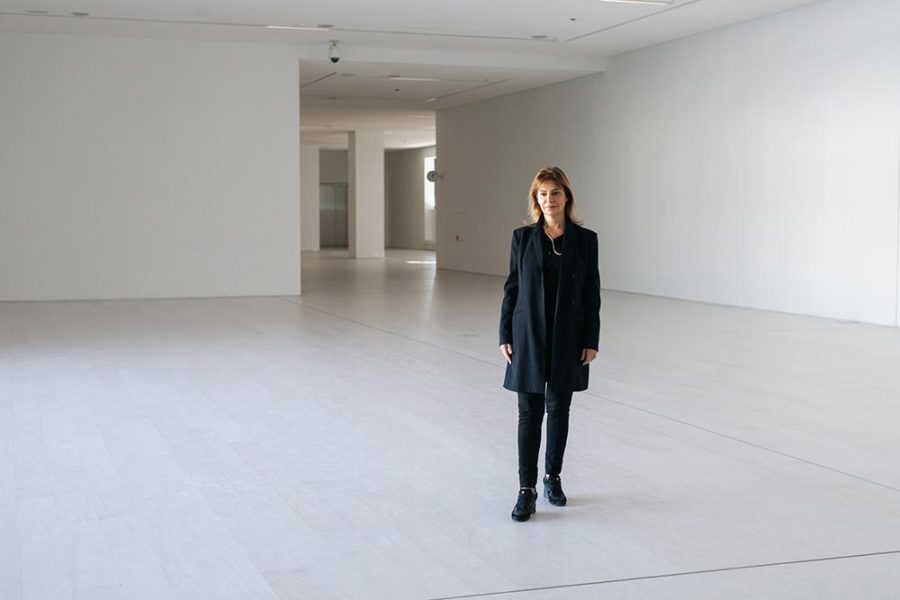 Katerina Koskina is dedicated to the progress of contemporary art in Greece. She is also one of the few Greeks that controversial artist Jan Fabre had announced a collaboration with, before he resigned from the post of creative director of the Athens and Epidaurus Festival. On the day we meet (April 2), Koskina is being bombarded by phone calls from journalists, because of an article which had falsely stated that Fabre had sent her his resignation first.  So our discussion could not but help kick off from the headline-grabbing Belgian artist’s resignation.

The National Museum of Contemporary Art (also known as EMST – its Greek abbreviation rendered in English letters) was founded by law in 1997, and has been in the making since 2000, when the museum’s site was allocated at the former Fix beer factory on Syngrou Avenue. By taking on the position of director in December 2014, Koskina was also taking on a many-headed Hydra in terms of problems, which have kept the museum’s doors closed. Yet despite the many obstacles in her path, she is devoted to her goal: to finally see the museum open in 2016.

Koskina brings a spherical experience of the Greek and foreign art world: curator of the J.F. Costopoulos Foundation’s collection for over 22 years, having also worked for the European Cultural Centre of Delphi and for the Athens Metro (in charge of the selection and installation of the art works in the stations). Furthermore, she has served as President of the Board of Trustees at Thessaloniki’s State Museum of Contemporary Art for 6 years, and also as director of the Thessaloniki Biennale from 2010 to 2015.

Do you think that Fabre was a good choice for the position of creative director of the Greek Festival?

I think yes. He’s a multidimensional artist with plenty of Festival experience. Fabre is a world-famous personality, whether we like it or not. He has a very radical creative oeuvre, which you either love or loath. What annoyed me however, was the way some of the Greek artists reacted after the press conference. I believe the press conference was not well prepared, but the reaction from some people was very aggressive.

This work was performed in Thessaloniki at the Megaron Mousikis and elsewhere and no fuss was created about it. So why now? Suddenly it was offensive. I would say that a big part of Fabre’s work has been inspired by ancient Greece and Greek mythology, and that he could have offered a lot to the festival. After all, his work is meant to be provocative. But how can we Greeks be so shocked by it? Have we forgotten our own mythology? Are we really so puritan?

Maybe we are not as contemporary as we would like to think we are?

Maybe, however, I think the problem was how Fabre handled the situation at the press conference. Furthermore, if the Greek Festival and Culture Ministry had taken more time to better organize the press conference, maybe things would have been different. Yet I also feel that some people were just waiting to react.  I like Fabre very much, and consider him a great artist and friend. I was involved in a project that had been announced (between Antwerp’s MUHKA museum and Greece’s EMST, among other projects we had discussed). But that doesn’t mean that there wouldn’t have been other collaborations with Greeks. I know that he was working on that.

What other collaborations are in store for EMST?

We are planning a celebration for International Museum Day (May 18), which will entail a collaboration with Switzerland’s Fluxus Foundation, which is celebrating 100 years of Dada. In 2017, the museum will be collaborating with Kassel’s Documenta 14 exhibition, which for the first time will be co-hosted in Athens and Kassel.

You have been involved in the Greek cultural scene and art world for around 28 years. What opinion have you formed?

Well, for starters, I have never regretted deciding to work in Greece, although I had studied and worked in Paris too.  No doubt working in Paris as a curator or museum director would have been less tiring, more organized and I wouldn’t have had to orchestrate so many other things which at the end of the day obstruct me from my curatorial goal. But I have noticed that in the last few years, a lot has changed in the Greek art world, and despite my great tiredness, I am glad that I am here and that I have witnessed these changes. Because things happen painstakingly slowly in Greece, when you achieve something, you feel extra happy about it. And it’s worthwhile supporting the artists of this country.

How do Greek artists compare to others?

There are great artists here. If they were living somewhere else, in a country that supports and promotes them, they would have played a different role on the international art scene. So many generations of Greek artists have been lost. Greek artists are heroes, because they have managed to establish themselves all on their own. But today, the art world is changing: the old art centres (Paris, London, Berlin, New York),  are now challenged by new markets in the Middle East ( eg Maghreb), and the former Eastern Bloc and with new artistic activity and research in art (eg of China, Africa). That’s why it is so important for EMST to open its doors to the public, and to provide Greek art with the international platform that it sorely needs. EMST will play a vital role institutionally in the re-evaluation of Greek art.

What have been the main obstacles you have encountered since you took on the position of the museum’s director?

Apart from the legal, technical, administrative and financial problems, there was also a psychological factor:  The previous director of 14 years, Anna Kafetsi had offered a lot, so people were initially a bit wary of me. Then, a little after I arrived at the museum, the political situation changed in Greece. For months problems came from the side of the Culture Ministry. Yet I’m a non-political person. I feel like I am a European citizen, although recently I have started to question what it means to be a European today. In any case, when someone chooses me for the job, they choose me for my work, not for any other reason.

What is your vision for the museum?

It’s a truly magical space of 20,000 m2, a historical building with great potential. However it needs the support of the Greek and international art world.  We need to finally see it in a positive light. The museum’s non-completion might reflect our shortcomings as a nation, but now, even during the crisis, it is important that this work is realized; it can offer so much to Greece’s cultural scene. And we are nearly there: Imagine when it is completed, having the Acropolis on the one hand, the National Museum of Contemporary Art on the other, plus all the other museums/institutions/centres – the whole spectrum of culture.

The museum has cost around 35 million euros, how much does it need to actually run?

Probably around 2 million a year. We are thinking creatively about how we can diminish the cost and how to find financial support, sponsors, donations, crowd-funding etc. We aim to make the best use of this wonderful building which will have a restaurant, café, and has the possibility to host many events. The rooftop terrace can be used for many months during the year (one guaranteed Greek benefit!), it can be rented even: for experimental theatre events, music events, conferences, discussions, cinema, sculpture shows, other festival events etc. If we use all of the building’s assets correctly, we will break even for sure.

Tell us about the museum’s collection

It has around 1100 works at the moment with a significant amount that has been bought through private initiatives (eg. through the J. F. Costopoulos Foundation in the past, also the NEON Foundation has helped in the last 4 years). But artists and their families have also donated works. There are works by significant foreign artists but also by many important Greek artists. The collection has a good base to start off with, which will be used for example to showcase Greek art in tandem with works of other collections/institutions, thus creating interesting dialogues on an international level.

Finally, tell us about your project planned for Art Athina in May

Together with the Athens School of Fine Arts, I am curating a special exhibition/installation dedicated to sculptor Giorgos Lappas, who passed away this year, aged 65. Lappas wasn’t afraid of experimentation, and his perspective on art was deep. He’s an example of one of those artists we were discussing before, who would have had a different career if he had been working elsewhere. Now it’s up to us to support his work.

Christian Brechneff: No Man is an Island