Harley and the Holy Mountain: a Greece Travel Memoir with Heart, Soul and Humour 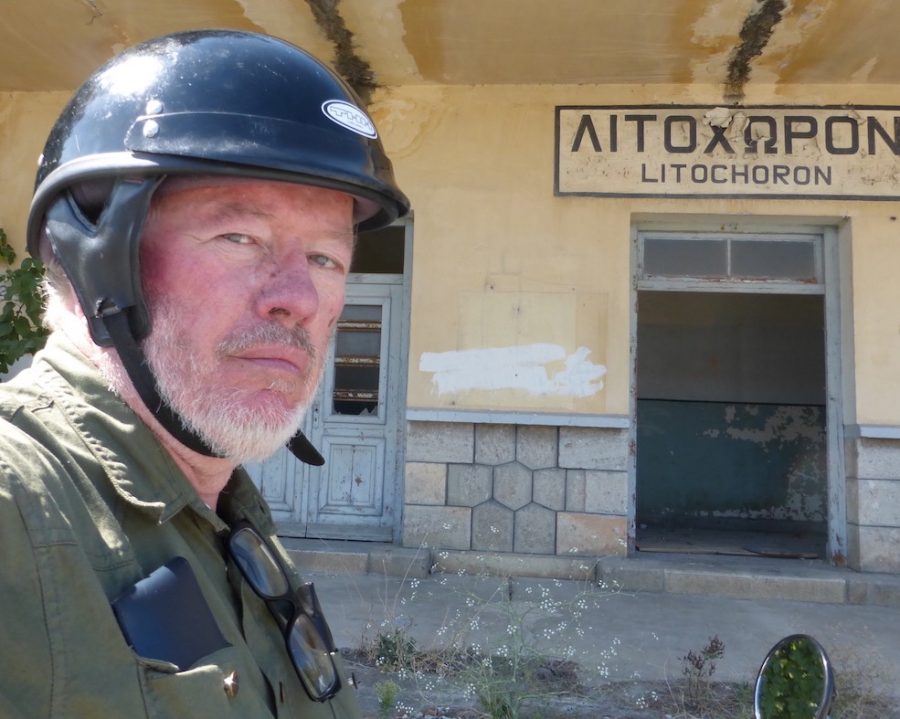 Why on earth would a 70-plus Englishman, who’s terrified of traffic, hop on a decrepit 50cc “papaki” bike named Harley and embark on a road trip from his village in Evia, all the way to Mount Athos? John Mole’s charming latest book, Harley and the Holy Mountain, is Zen and the Art of Motorcycle Maintenance with creaky knees, lashings of humour and humanity – and a lovely dollop of Greek history. John Mole could write about watching paint dry and have you in stitches – he had Diana Farr Louis bewitched, beguiled and laughing out loud. 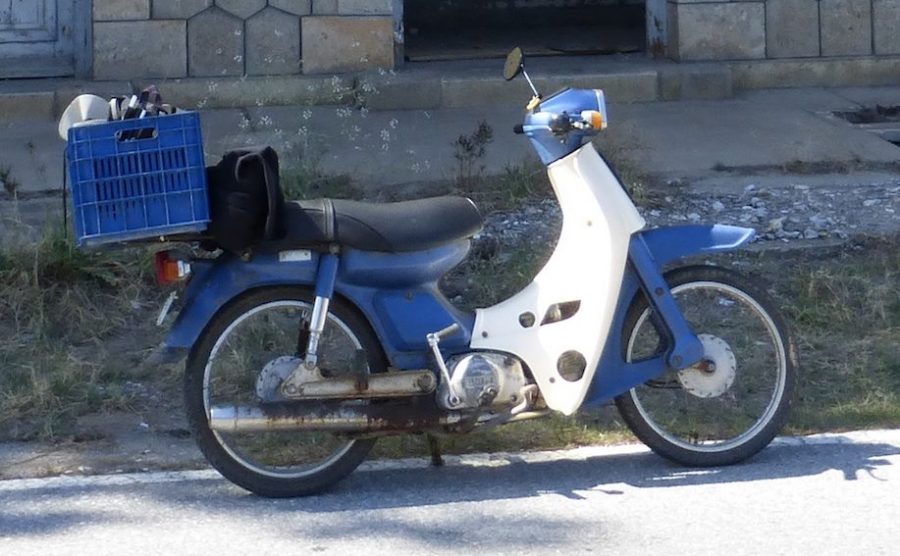 “Harley is a twenty-year-old Yamaha 50cc step-through. In motorcycle years, that would make him about my age. Why don’t I get a bigger bike? 50cc is the most I can drive on my ordinary licence and I’m too wimpish to get a motorcycle licence. Besides, Harley matches my temperament. Happiest on the flat, coasts downhill, weak and wheezy uphill. We rarely go faster than 40kph/25mph. Sometimes we are overtaken by bicyclists. On steep hills, a brisk walker would leave us behind. Greek slang for such a bike is papaki, a little duck.”

As he introduces himself in the same paragraph, we are left wondering, why on earth is a 70 plus Englishman who later reveals himself to be a bit creaky in the knees and terrified of traffic setting off for this unusual road trip that will take him from his home in a village near the middle of Evia all the way to Mount Athos? It takes him several chapters to leave home and get off the island, to the point that both author and reader question whether he and Harley will arrive intact or end up in a ditch.

But every day is described in such vivid, eclectic detail that you don’t want the journey to end. Along the way you meet a variety of memorable characters – from a baker “with eyes glazed like the doughnuts she stuffs” to the waitress who “could double for Iphigeneia, classic Greek looks . . . melting dark eyes” but turns out to be Welsh – and revel in descriptions of commonplace sights like a souvenir shop that sells “wooden spoons for stirring pulses . . . whittled by vegans.” The ride is punctuated by conversations with Harley (a patient listener), and nuggets of history that are easily digestible while being utterly fascinating. 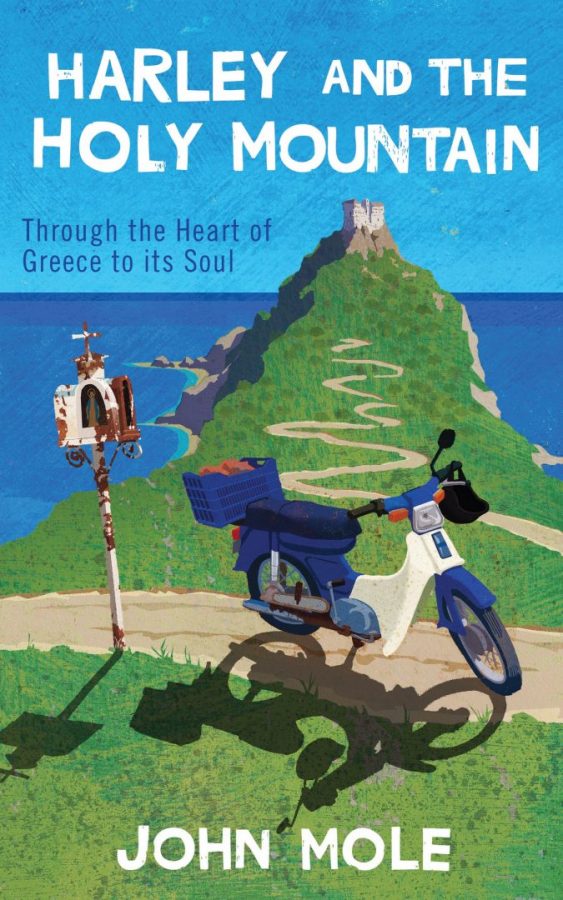 I pride myself on knowing Greece much better than the average Greek and have assimilated a good deal of history along the way but John’s depth and range of knowledge and insights on subjects ranging from Hesiod and Alexander to the Latin and Ottoman occupations, the War of Independence, Byron, Karaghiozi and the Greek Civil War revealed many gaps in my own “education.” As he told me, “This is not an objective Western point of view. I tried to bring out elements of Greek history that Greeks themselves value and that have created the country we have today. Indeed it is remarkable that Greece exists at all, given the number of horrors that have rocked it in the last 200 years.”

John Mole has accomplished a rare feat, making his detours into the past both informative and entertaining. Harley and The Holy Mountain is no ordinary travel book, because he also has no fear of leaving things unsaid and unexplored: “I may be inventing a novel form of travel journal, listing places I haven’t seen.” For example, he comes across a turn off signposted to a 4th century BC Macedonian tomb, “which I’ve never managed to find and I’m not going to try now. I’ve had enough tombs for one day.”

But he also manages to recreate the whole story of Agamemnon’s setting sail for Troy at Lefkandi, “one of [his] favourite sites in Greece [where] the immediate attraction is there is nothing to look at . . .  just a flat field on a hill beside the sea where the Great Greek Adventure began.” 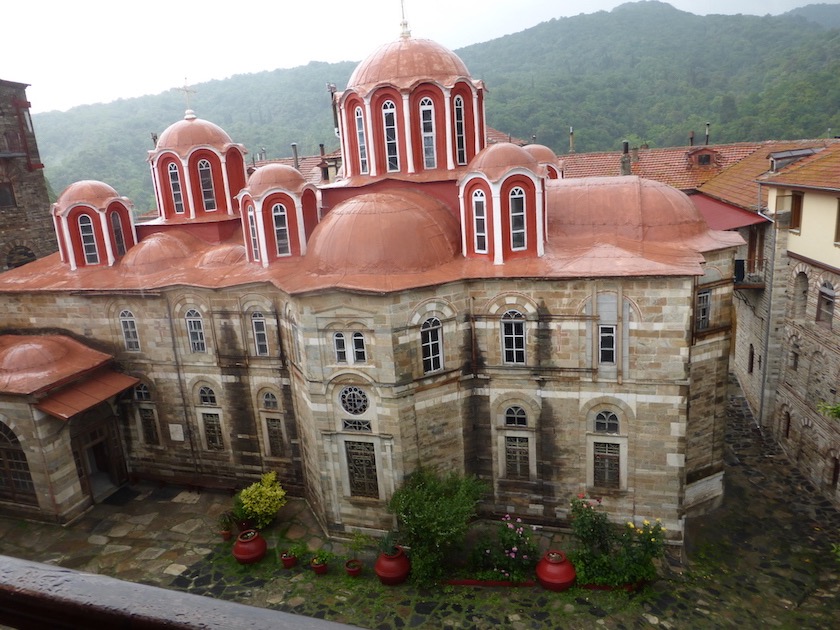 As the author bumps along through the heart of Greece to its soul, the Holy Mountain, he made me want to get into my little jeep and follow his journey, but only as far as Ouranopolis, alas. I don’t think Mount Athos, which is dedicated to the Virgin Mary, is ever going to succumb to the outside world’s push for gender equality and let women in.

To get some perspective on the author, I got in touch via Skype. Our interview had me glued to the screen, scribbling notes as I listened to John outline his life story with healthy doses of hilarity and the absurd. 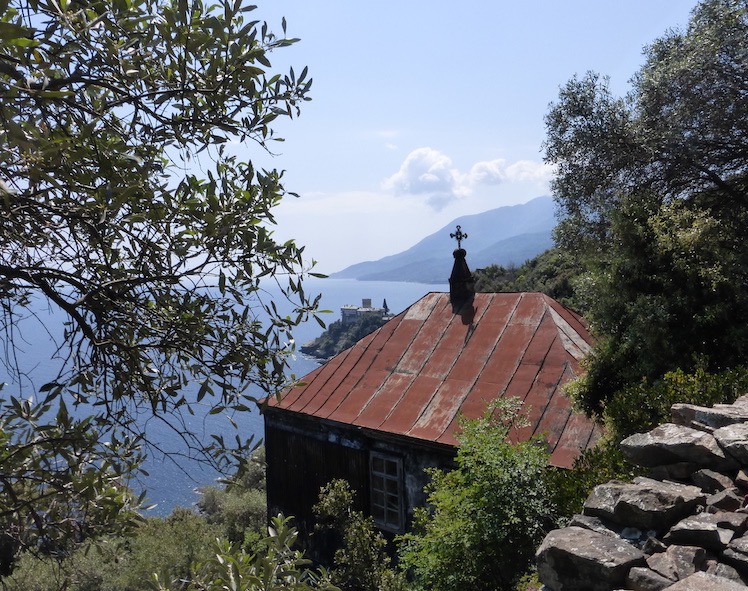 He grew up in Birmingham, read French and German at Oxford, and after business school in France wound up working for the Mellon Bank in Pittsburgh for two years. By then he had married fellow Oxford grad Nuala (who as a highly regarded human rights lawyer, founder of AIRE  and Last Rights, as well as being a mother of four, deserves at least a book on her own career). Back in London, John travelled in Europe and the Middle East until he was posted to Athens in 1975. They came with three kids and left with four, five years later, having acquired a goat shed in Evia, which became not only a home but the subject of a delightful book, It’s All Greek to Me. 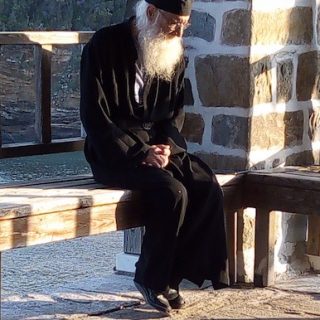 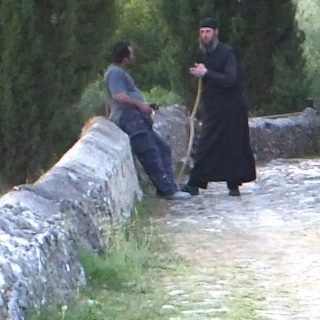 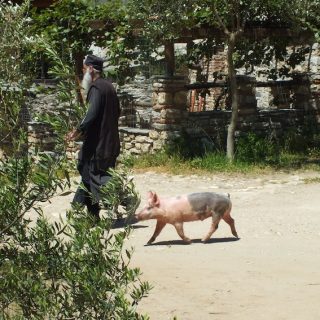 As a banker, he went “to every North African country, the Gulf, Iran and French-speaking Africa.  . . . which explains why my Greek is so hopeless, I was trying to learn Arabic. I hadn’t expected to like banking but it was more interesting than I thought it would be. Nevertheless, my fortieth birthday present to myself was, as Naipaul said, to give up the humiliation of employment.”

It was then that John turned to writing books, among other things. He wrote a novel, followed by Mind Your Manners, a “manual” on how to do business in different cultures, which became a best-seller, translated into 20 languages. But he did not stop travelling. 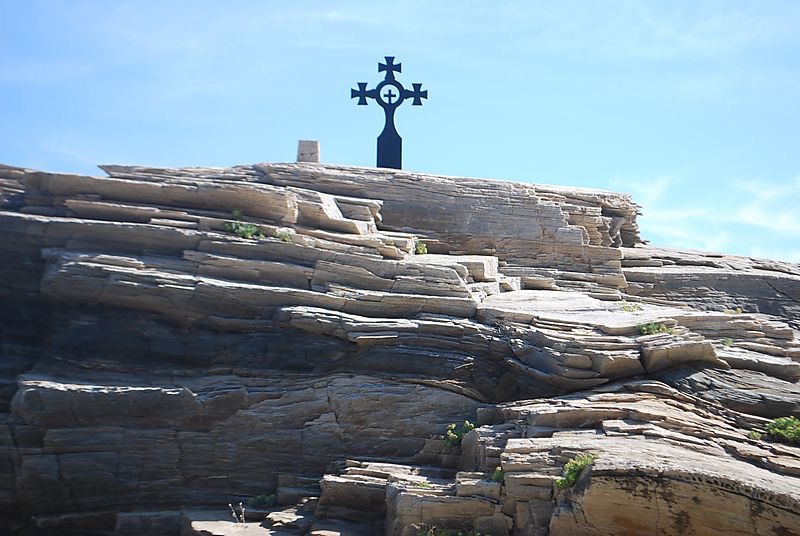 Some of his travels led him to quite improbable ventures. In Tanzania, he discovered that a water weed in Lake Victoria was a real pest and, with an Oxford colleague who was a biology professor, tried to come up with a way to combat it. Part of the solution lay in turning it into animal fodder, mixed with the remains of grain left over from a local brewery. My jaw dropped when he told me that when villagers moved into towns they often brought their cherished cows with them and installed them in their flats in apartment buildings. Well, John had a solution for that too: mootels!

At this point in the conversation, he added that he has another job description besides author and retired banker – “failed entrepreneur.”

In the 90s, fascinated by the collapse of the Soviet Union, he went to Moscow, where he discovered Mind Your Manners had been illegally translated and was in use as a college textbook. “Samzidats were no longer novels by Solzhenitsyn but books on business and the stock market. By then, I was affiliated with the ILO and embarked on a lecture tour all over Russia as far as the Urals, telling my audiences what they needed to know in order to do business in the US and Europe. And while I was sitting in a sauna in St Petersburg, trying to think of how I could do business in Russia, I came up with the idea of opening a jacket potato business with sauces.

“Macdonalds had already opened and was a wild success. I found a manager whose father had worked for Lloyds and spoke perfect English, I became a member of the union of farmers and a potato oligarch. But it was not to last. I left in a hurry after a business meeting in a Mafia-run topless breakfast joint, gave up cross-cultural consulting and decided never to wear a suit again. That was about ten years ago.”

This brings us back to John’s passion for exploring, or what he calls “trundle casing, ie geriatric backpacking,” guided by his inveterate curiosity which pushes him to dig deep into original sources from Herodotus to 18th-century travellers as he veers into unknown territory.

But Mount Athos is far from unknown to John. In fact, his trip with Harley was his fifth. The first time was out of curiosity. The second out of fascination with a community that is glibly described as a throwback to medieval Byzantium. It is more accurate to say that the monks live in the modern world but according to a philosophy that predates modernity. 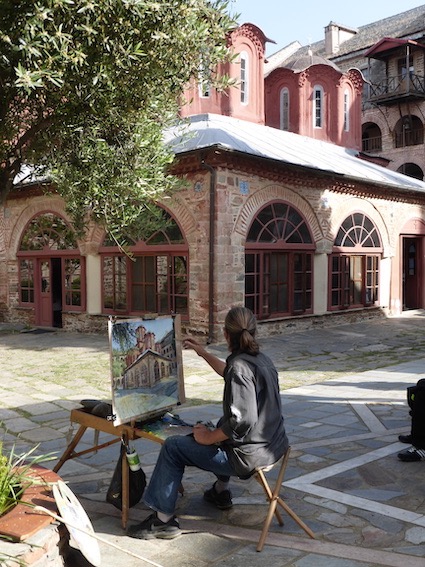 “I have been twice more in search of understanding, of what I haven’t yet discovered. The strange beauty of the place promises mystery, in the ancient sense of truth beyond comprehension.”

“In those beautiful hills, I have met kindness and hospitality among men solid in their faith and in constant striving to live up to it. Sacrifice and self-denial enhance their humanity. I am grateful they have let me into their world.”

But the fifth visit had an ostensibly different purpose. John and Harley were on a mission: to deliver some books by P. G. Wodehouse to Father Makarios, a monk from Moldava. The mind boggles at the thought of Jeeves and Wooster on the Holy Mountain, and therein hangs a tale, which you’ll have to buy the book to find out. Of course, Harley did not make the pilgrimage; he stayed at Ouranopolis, but John’s meetings with extraordinary men, sights and history had me enthralled, amused and finally quite moved.

As he told me, “When I set off, I didn’t know what kind of book it would be or even if it would be a book at all. But I took notes on a useless old phone that happens to have Word 2 and then wrote them up every few days on my laptop. I’m never without my laptop.”

But when he realized he had a good story, he decided to enrich it with dollops of history, “just enough so that people will get through it and not get bogged down in it. I was trying to be entertaining.”

And by taking us where his own curiosity led him, he has produced a wonderful read. Through John, we meet “a group of people who live in a different world of perception, thought, belief. Who have a set of priorities alien to ours, certainly, and the world in which we have to live.”

As for living in Greece six months a year (when possible), he had this to say: “When we came, aged 30 and 29, we were typically uptight Oxford grads. But even during the first five year, when friends came to visit, they would invariably comment, ‘You’re very different. Now you hug us!’ And it’s true, Greece taught us to become much more demonstrative, outgoing and friendly. We hope to be back soon.”

At johnmole.com you’ll find descriptions of his other books, which you can order through Amazon or other online shops.