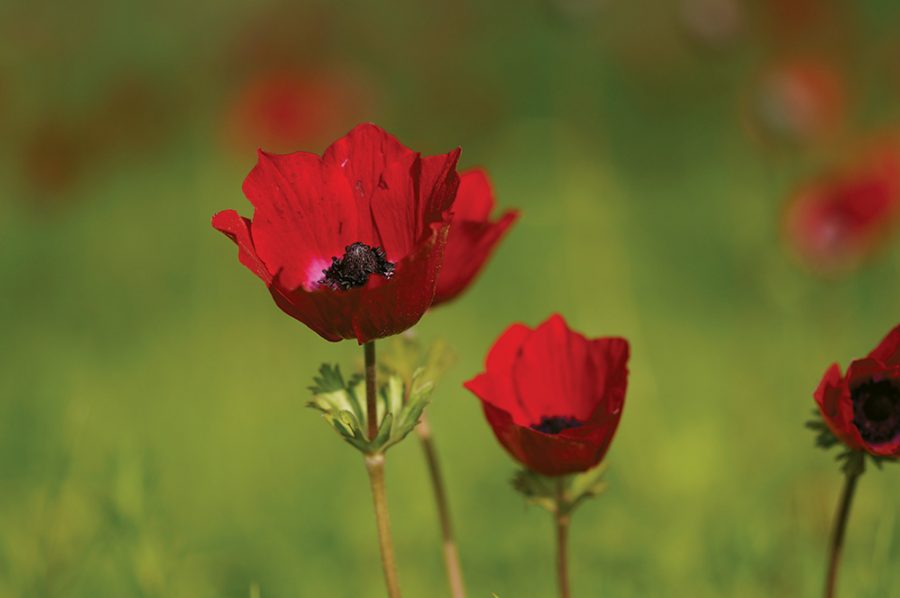 One of the upsides of being in lockdown is that it compels you to appreciate nature in all its glory in the brief window allotted for daily constitutionals. Nike Morgan is happiest when walking on the hillsides, photographing the wild flowers of Greece. Here, she charts some of her most colourful discoveries – such as the fatal pink colchicum used by the vengeful mythological Medea to poison her children – and lets us in on where and when to find the finest floral specimens.

I looked up and saw four eyes shyly peering at me, no more than ten metres away – two red deer were standing motionless among the fir trees on Mount Parnitha, beside Bafi Lodge. I managed to snap a photo of them. Then, for just a brief moment, I looked for my friend, Katie, who often accompanied me on my outings into the countryside, so that I could point them out to her but I couldn’t see her. By the time I looked back, the deer had vanished without a sound. 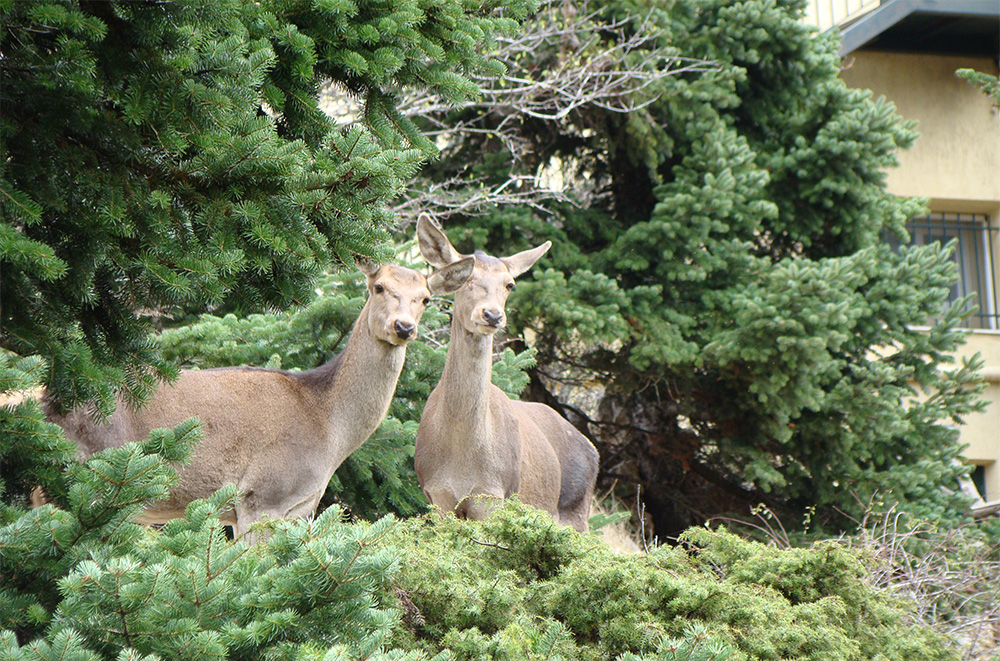 We weren’t looking for deer. We were searching for wild flowers. When your hobby is photographing wild flowers around Athens, always expect the unexpected – on this occasion, seeing the deer was an added bonus.

Photographing wild flowers has many benefits: breathing the fresh air and enjoying the sunshine, keeping fit by walking by the sea or on a mountainside, the exhilaration of discovering a new flower, the creative satisfaction of capturing a good photo, and the excitement of finding new places.

A flower for each season

It’s possible to find wild flowers in and around Athens throughout the year, although they are most abundant in spring and autumn. I took the photo of the red anemones in spring 2014 on the island of Egina, in a large field full of them near a friend’s house.

The delphiniums were in one of my favourite locations – Avlaki on the east coast of Attica, just south of Porto Rafti. (The KTEL bus terminus is on Mavromateon Street, near Victoria metro station.) I’ve found many species of wild flowers in Avlaki over the years, including orchids. In spring and autumn it’s a peaceful place, unlike midsummer when it’s heaving with holidaymakers. You can have lunch at one of the local tavernas after scrambling about on the hillsides. I took this photo in June 2009. The delphiniums are, in fact, tiny – close-ups of wild flowers can be very misleading! 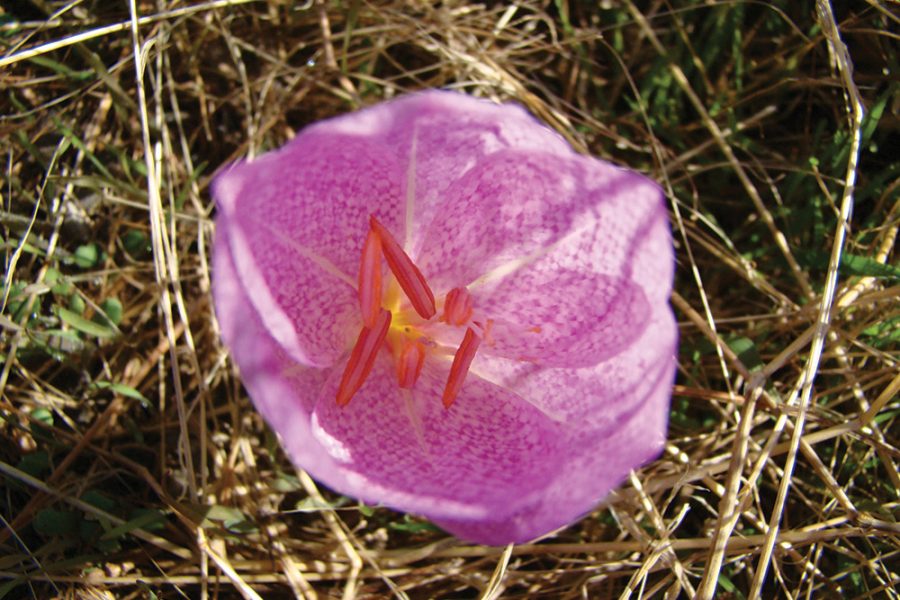 I snapped the pink colchicum on Mount Parnitha in October 2011. The mountain is full of unusual flora. (A cable car takes you to the casino, which you can walk through to get onto the mountain.) This colchicum looks like a tulip or a very large crocus, but I was pretty sure it was neither. When I referred to the book Wild flowers of the Mediterranean (by Marjorie Blamey and Christopher Grey-Wilson) I discovered that I was right. Then I learnt that in Euripide’s play Medea, the mythological sorceress killed her children with poison from this plant to avenge her husband, Jason, who had abandoned her. Medea was from Colchis, which is how the plant acquired its name.

The winter crocus was growing on Mount Pendeli on Boxing Day 2010, during an exceptionally mild December.

So many different species of wild flowers grow in and around Athens that it would be impossible to mention them all in a short article like this. So far, I have photographed more than 400 plants and, incredibly, I’m still finding ones I’ve never seen before. I’m especially fond of irises and orchids, but I haven’t included any here – they will be in the illustrated book I am working on.

You can’t avoid photographing insects that frequent wild flowers, and many are beautiful – not only butterflies, but also metallic green or bronze-coloured beetles, and lots of other creatures. When you start, you don’t know where to stop – at reptiles, birds or even mammals. So why stop? Get the most out of your hobby and photograph the creatures you come across as well!

Where to find wildflowers around Athens 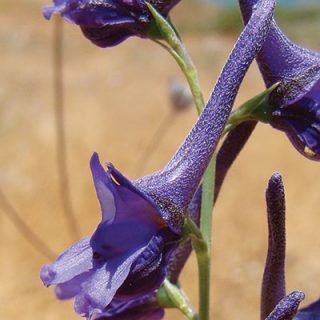 Within Athens, good places to find wild flowers, especially in spring, are archaeological sites such as the Athenian Agora at Thissio. There are also parks like Syngrou Park in Marousi on Kifisias Avenue, and Votanikos on Iera Odos, where wild flowers grow on the hillside above, and you can find rare species in the rock garden dedicated to botanist, Myrto Apergi. (From Agia Marina metro station, take a bus to Diomidios bus stop. The Votanikos Park is opposite.)

Around Athens, you can find wild flowers on the coast in places such as the rocky bays near Vouliagmeni on the west coast, or Avlaki on the east coast, as well as around Sounion and Lavrion near the southern tip of Attica. There are three mountains surrounding the city of Athens: Parnitha to the north, Pendeli to the north-east and Immitos to the south-east. All three have been ravaged by fires, but you can still find flowers there. Mount Immitos is bare to the south but greener the farther north you go. I have found flowers to photograph above Papagou and around the monasteries of Karea and Kesariani. Mount Pendeli has a double waterfall in the Drafi area. The stream, which flows all the year round, then passes through a gorge where you can find tadpoles and dragonflies in spring. The path down to it is steep, but it is just one of the places I’ve discovered when searching for wild flowers to photograph.

Finally, please try to avoid the temptation to cut wild flowers. I never pick them because doing so deprives the plant of the ability to reproduce, and many of the flowers I have come across are rare or protected by law. Remember – take only photographs and leave only footprints! 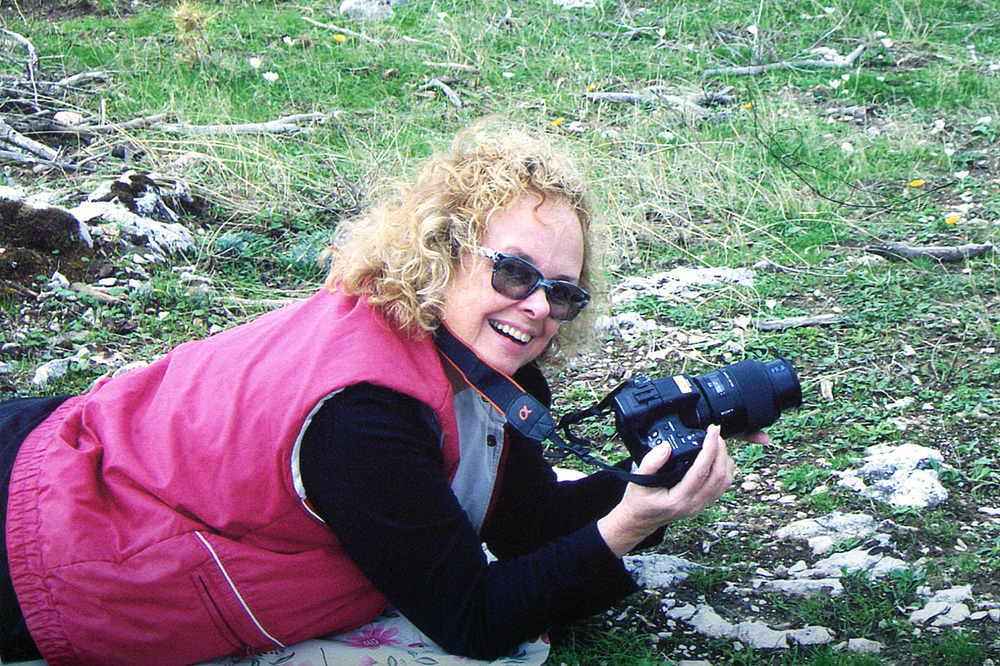 Born in England of a Welsh father and Greek mother, Nike grew up and studied in England where she worked as a primary school teacher. She has lived in Greece for many years and taught English in Athens as well as working as a writer and editor at Hillside Press. She sings in St. Paul’s church choir and the Athens Singers. Nike is interested in astronomy, geology and botany.

You don’t need to fly to get ski high