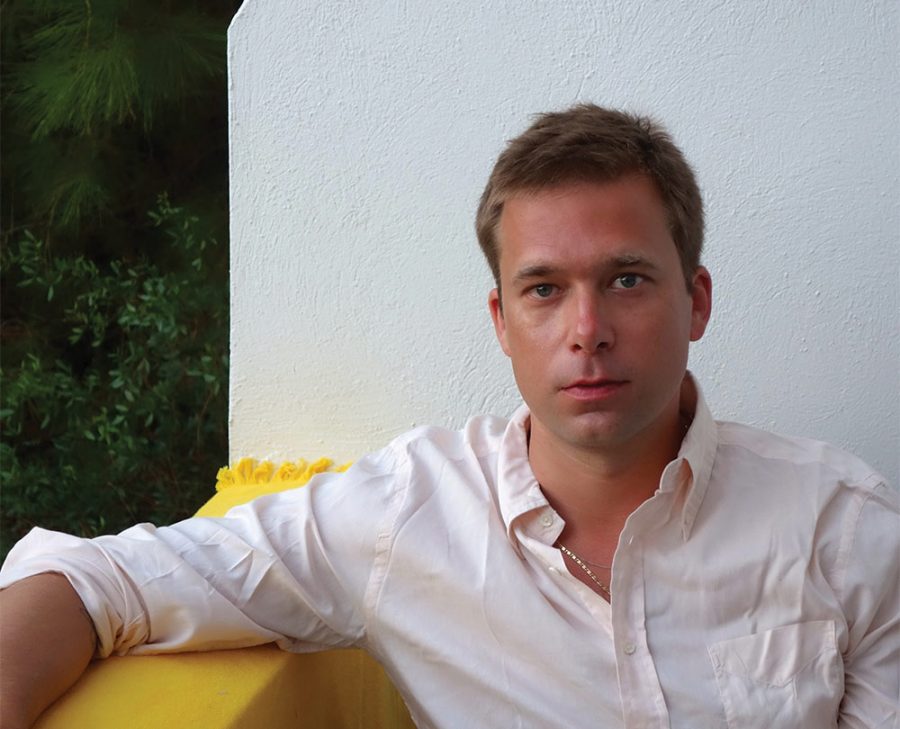 Emerging literary star Christopher Bollen talks to Amanda Dardanis about his great passion for Patmos, the legacy of childhood friendships, and the power that extreme wealth wields over us.

“There’s nothing more delusional than a tourist who hates other tourists,” declares Christopher Bollen, the man billed as the next Patricia Highsmith. Or Graham Greene. Or F. Scott Fitzgerald. Depending on which glowing review you’ve just read.

A beat later, Bollen’s self-deprecating laugh bounces down the line from Manhattan. “But that’s exactly what I am!”

We’re talking about the three consecutive summers that the author spent on Patmos researching his latest novel, The Destroyers.

A suspenseful psychological thriller, with the feel of a modern-day The Talented Mr. Ripley, the book is cast on the famous island of Revelations. Bollen’s long sojourn there, enjoying the hospitality and tutelage of locals and sybarites, has understandably left him feeling rather possessive of the island Forbes magazine once crowned as among the world’s “top ten idyllic places to live”.

“If I had a summer house in Patmos, I’d be in heaven,” he concurs.

“Patmos is so special because it’s hard to get to. It kind of curbs a lot of the greener tourists. But, sometimes you’d see a triple-decker ferry boat going by and think, ‘Oh God, they found me!’

With the release of this, his stylish third novel, the 41-year-old New Yorker with the preternaturally boyish visage, has elevated the psychological thriller beyond potboiler status and into the literary realm. 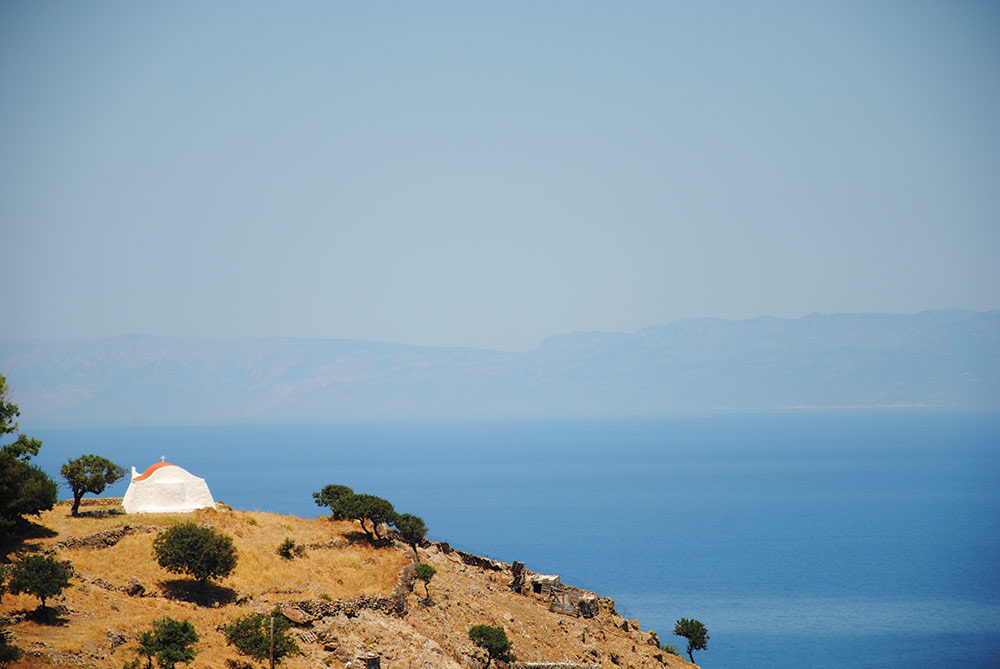 For Greek islomaniacs, The Destroyers bubbles over with gorgeously descriptive passages about Patmos, like this one:

“Red bougainvillea cracks from alleys and creeps along the sides of stores, its flowers a fluttering parrot red that jars the sleepless and the slept.”

Meanwhile, the plot sees two loosely-estranged childhood friends Charlie and Ian, both born into a world of privilege, reunited on Patmos after Ian finds himself suddenly penniless. In need of a lifeline, he reaches out to his former school chum who runs a shipping enterprise in Greece.

There’s lots of luxury yacht-and-bed-hopping, and beautiful but rudderless people behaving badly before an underlying darkness emerges in paradise and within Bollen’s wealthy cast of players.

Like F. Scott Fitzgerald, this Ohio-born scribe inhabits the same gilded world – professionally at least – that he writes about so convincingly. Bollen is editor-at-large at Interview magazine, the iconic celebrity bible founded by Andy Warhol in the late 60s. His lengthy tenure there has brushed him up against some of his own literary idols including Norman Mailer, Toni Morrison and Robert Altman.

In conversation, Bollen is not the jaded urbanite one might anticipate. Instead, this Catholic-school-educated-turned-atheist is an appealing convergence of knowing chronicler and wide-eyed enthusiast. Insider caught up with the talented emerging writer to discover more about his literary inspirations and the origins of his fascination with Greece: 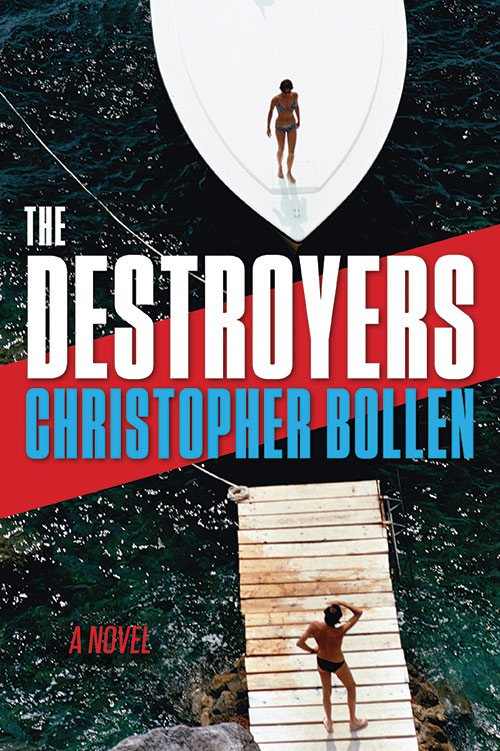 The Destroyers by Christopher Bollen

Tell us about your Patmos Connection? How did the island first make itself known to you?

I’d always been fascinated by Patmos. So many of the ideas we have about the destruction of the world stem from there. I grew up at a Catholic Boys School where there was an entire unit on the Book of Revelations. Which when you’re a teenage boy made to study the bible is everyone’s favourite book!

But then from my magazine and art world life in New York, I kept hearing from rich European jetsetters that they were going to Patmos. These people seemed to have great lives and great taste. But I kept thinking, how on earth are these two realities overlapping?

First-time visitors to Patmos often attest that the island leaves a powerful imprint on them. Was that your experience?

Absolutely. Most Greek islands have some kind of epic history or mythology: this is where Apollo came down or where Leda was kidnapped. But here was a Christian island. And even though I’m now an atheist, there was this tangible New World feeling in the midst of all that antiquity.

What is the island’s biggest charm for you?

Patmos is such a small island and yet it’s a bit like Manhattan. There are different scenes. There’s the Chora side which is definitely fashionable and you can’t go ten feet without running into someone from New York. But then there’s this other side of Patmos in the north around Kampos where it’s basically farmland and it’s so quiet and you don’t feel like you’re trapped in some kind of beautiful Louis Vuitton store set.

From Byron to Leigh Fermor and Durrell, what is it about Greece that makes it such a compelling literary backdrop?

Greece has such fundamental beauty with the simplest palette that it doesn’t need to over-decorate at all. While I love Italy, compared to Greece, it can feel ornate and overly-decorative. And I do feel like there’s a weird psychological vibration in Greece. It really makes you feel connected to civilization.

“The Destroyers” refers to a boyhood game that Charlie and Ian used to play – but it seems there’s also a strong “Great Gatsby” subtext about the vast carelessness of the moneyed class and how “they smash things up”.

Definitely. It’s been said that money is its own country. There’s this illusion that wealth protects you. But in a heartbeat it can be taken from you.

Did you have any Gatsby-esque experiences of your own while researching your novel on Patmos?

On my third visit, I was at a dinner party and I posed the question, “If you have a nice yacht, can you travel to Turkey without your boat being searched or having to go through customs?” An Italian billionaire there offered to take me the next day. I’m sure we were sailing through at the same time as many other boats that were stopped. If you looked like you’d come from the Middle East, you’d be stopped and stripped. It’s frightening what money does. 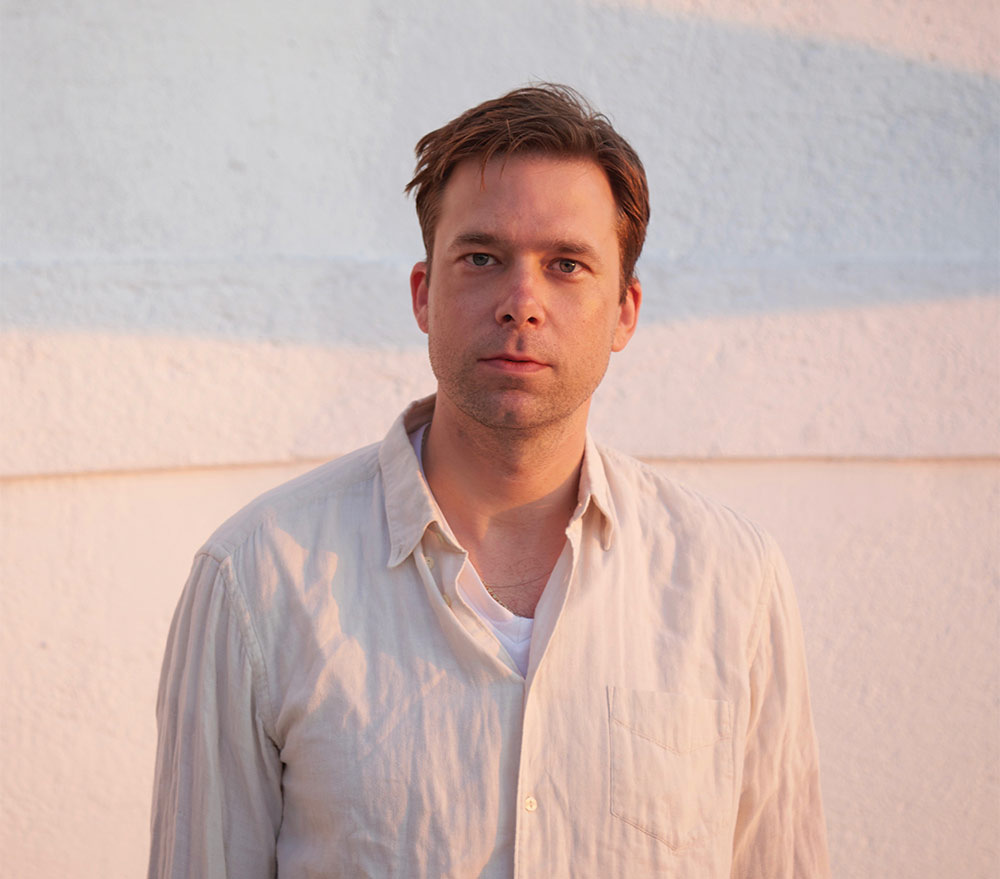 How does the Greek refugee crisis fit into your narrative framework? Did it personally touch you?

There was something about doing research in Patmos in the summer of 2015 that was upsetting. It did make me feel like “How dare I even write this book on rich people?” But every time you go on a holiday, if you dig down deep enough, you’ll find the inequality in life. There’s the indulgence of a vacation, when you’re swimming in waters and jumping off of yachts and having this great time and it’s the same water that only miles away people are swimming in with only the shirts on their backs to escape. When those situations happen, when extreme luxury and extreme poverty and desperation come right up against each other, you can’t help feeling that the world has gone crazy.

You’ve been likened to some pretty lofty literary names. Is that kind of comparison help or hindrance to the creative process?

I find it extremely flattering when it’s positive. Until someone says, “Oh, they’re not living up to them”. I’m honoured to have any of those names put anywhere near mine. Especially Patricia Highsmith. The Talented Mr. Ripley was such an influence for me that I had to check myself often to steer this story in the other way.  It’s such a beautiful book and I think it may well be the Great American novel. I just love the idea of taking over someone else’s life so completely.

Even though writers like Donna Tartt have paved the way, is there still some suspicion around the “literary thriller” genre?

People don’t like it if they can’t completely categorise you. I have so many friends – friends mind you – who say, “Oh gosh, sorry, but I don’t read thrillers”. On the other hand, there’s people who love mysteries but don’t love the fat of philosophical thought.

Like Ian and Charlie, you went to a Catholic boys school. Do you think these type of all-consuming childhood friendships have a shelf-life?

Secretly, perhaps, we resent people who’ve seen us at our weakest. They know where you came from and what your parents did or how often you got beaten up or bullied. But you never fully want to let go. There’s a weird magnetic pull that’s hard to break.

Will you return to Greece?

Absolutely. Greece has really managed, in the up and downs of its economy, to keep its identity. Whenever I go to Greece, I feel like I’ve stripped down to some kind of pure living and I love it.

Daniel Egnéus: An Existentialist In Exile