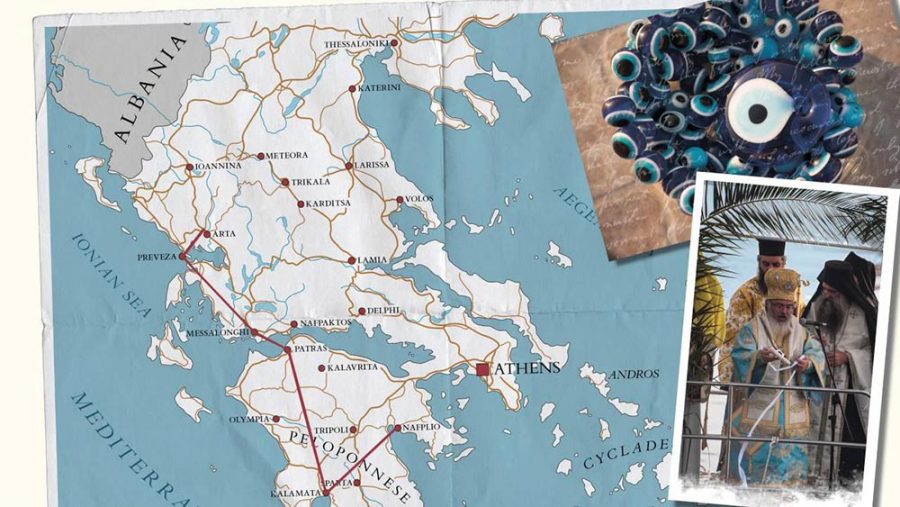 Costas, from Dodoni, works on his plot of land, his ‘kipo’, from morning to night to avoid his malodorous wife. One day, he discovers a piece of shimmering white marble under the hardened soil. ‘By mid-afternoon, he realised he was looking down at the plump cheeks of a woman’s bottom.’ It was the Goddess Aphrodite. Unrequited love began. This is one of the many stories featured in Cartes Postale from Greece (Headline Review, 22 September 2016).

The internationally bestselling author, Victoria Hislop, offers more halcyon days of Greece, a love affair that has spanned 40 years, in her latest novel woven with grit and humility. It’s a ground-breaking precedent; a work of short stories interspersed with vivid postcards or cartes postale – taken by Alexandros Kakolyris. They infuse the reader with the contradictions that stronghold this place; its whimsy, and dilapidation in equal measure.

In essence, Cartes Postale from Greece is a travel diary of a broken-hearted man, ‘A’, for Anthony Brown. He is a 45-year-old art historian who has been stood up at Kalamata airport by the woman he loves, S Ibbotson, (Sarah). He embarks on his journey alone starting off with the incredible Peloponnese.

“The fundamental difference between the UK and Greece is that no one treats you like a stranger here in Greece.” Victoria Hislop

Anthony wants to be left by himself in his sorrow, but everywhere he goes he’s offered company; a story. ‘For the Greeks, the worst thing in the world is to be alone, so someone always comes to talk to me, to ask me or tell me something.’

He purges his grief by writing his experiences down on postcards sending them back to his love in northwest London. The problem is that Sarah Ibbotson no longer lives there. Ellie Thomas now does.

Week after week, the postcards arrive at Ellie’s dinghy flat without a return address, signed ‘A’. They startle in their brightness and illuminate the narrative capturing the light, colour, and sounds, of Nafplio, Sparta, and Ikaria, to name a few.

Ellie, uninspired by her work selling advertising space, creates a colourful montage on her wall until, six months later, the postcards stop. A spell has been cast, and she is resolved to see Greece for herself. On the morning she leaves for Athens, a blue notebook arrives. At this point ‘A’ takes control of the narrative in the form of extracts from his ‘spiritual’ journey.

The tales reflect the social, political and financial pillage the Greeks had suffered, past and present, from when the Turks invaded the country, to the introduction of capital controls. Some are nostalgic and without guile, others are downright horrifying. Like the one about the French honeymooner hanged in a strange, obscure village, or the fearsome Maniatis groom in Nafplio. Another is about an energetic 1000-year-old Icarian who claims she knew Daedalus, or about how the ‘evil eye’ killed Lord Byron, and much more.

Sometimes, it feels like Hislop wants to express some of her frustrations at Greece. About the lack implementation of regulations; the avoidance of a tax system created by corrupt governments; the injustice of the German reparations; the undercurrent of misogyny, and the distrust of foreigners, which contradicts place of pride in the national identity – their hospitality.

These stories unravel not only the culture but also the ‘pneuma’ or spirit of this majestic country, as well as Anthony’s desire to live life to the fullest again.

Hislop’s writing in this latest release – with her use of some uninspired descriptive phrases such as “he felt her heart beating” – may not deliver the skilful potency of her earlier efforts like The Island.  But Cartes Postale from Greece offers a perfect symposium in storytelling – an odyssey that contains a story within a story, unfurling artful anecdotes graced by brilliant images.