Behind the Beards: Gilbert & George

The Big Beard might finally be on its way out as the compulsory millennial youth prop. But its potency as a cultural and religious marker will always endure, say anarchic British design duo Gilbert & George. The prodigious pair have cemented this all-pervasive hirsute legacy in their latest primal exhibition The Beard Pictures, to mark the 50th anniversary of their creative collaboration.

Gilbert & George view themselves as Living Sculptures. And like so much of their previous artistic output, the 13 arresting works from The Beard Pictures, now on show at Athens’ Bernier Eliades Gallery, are based on manipulation of their own image.

Most are not altogether comfortable to gaze upon. The Beard Pictures are violent, eerie, grotesque, lurid and crazed, depicting a dream-like world of paranoia, destruction and madness, coloured with strange sickly hues and smashed up, absurd landscapes. If they had a cinematic bedfellow, it would probably be Stanley Kubrick’s “A Clockwork Orange”.

“Our art has always been about death, life, sex, fear, money, race and religion.” So says George Passmore, who makes up one half of notorious artist duo Gilbert and George alongside Gilbert Prousch. As students in the sculptural department at St. Martin’s School of Art, they launched their artistic careers with a performance entitled, Singing Sculptures, first shown at the Nigel Greenwood Gallery, London in 1970, and subsequently travelled the world. A performance featuring the pair standing on a platform with their faces painted gold singing Flanagan and Allen’s Underneath the Arches for eight hours, it introduced the world to walking, talking icons at work.

Best-known for their series of Pictures, including the Dirty Words Pictures, which documents street life in Thatcher’s Britain, the Naked Shit Pictures, images created with urine and faeces, the Son of a God Pictures that took on the aesthetics of the church in order to comment on its practices, to the Jack Freak Pictures and The Beard Pictures today, essentially a series that reflects, relates and in turn, defines the changing face of Britain, they have built a portfolio of work that has mirrored and in part, defined Britain and British art.

Gilbert & George take their places within The Beard Pictures as intense, red, staring, empty-headed and sinister versions of themselves. Their eyes are shadowed and bizarrely prettified and they seem to look at, into and through the viewer. They look possessed and stern, absurd, imprisoned, mocking and mocked.

In each picture they wear beards that are surreal and symbolic. Beards made of wire mesh, beards made of beer foam, beards made of flowers, beards comprising rabbits with snakes for tongues. Secular and sacred, the throwback emblem of hip millennial youth as well as a mark of religious faith, the beard is depicted in The Beard Pictures as both mask and meaning: a sign of the times.

Needless to say, this is an artistic duo with their fingers firmly on the social pulse – not content with pretty pictures that contain little or no message.

Passmore says: “So-called intellectuals assume that artists are, by nature, anti-establishment. So they assume we use our work in that way. But we are not critical artists. We approach things head-on.”

Known for trashing contemporary artistic niceties in favour of intense symbolism, through The Beard Pictures Gilbert and George turn history into a mad parade of a world gone mad, their mood shape-shifting between that of science fiction, lucid dreaming and Victorian caricature.

Far from being passive participants in the world around them, Prousch admits with obvious pleasure; “We do like to press a lot of buttons,” something anyone familiar with their work is aware of.”

“That’s the artist’s job,” Passmore continues, and he’s not fooling around. By playing with instantly recognizable motifs and themes that can be interpreted in a plethora of different ways, Gilbert and George are determined to highlight, rethink and – where necessary – ridicule terms, definitions and symbols. With a bit of dry humour thrown in for good measure. 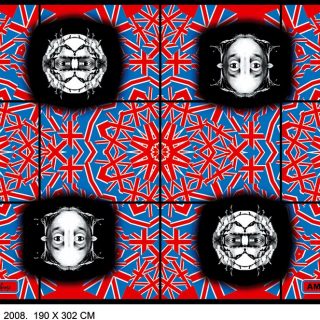 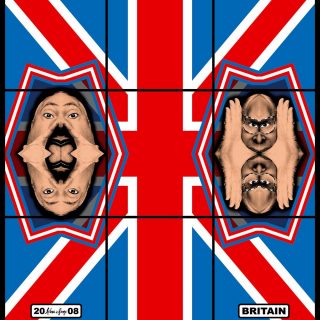 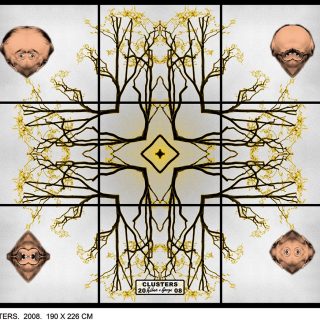 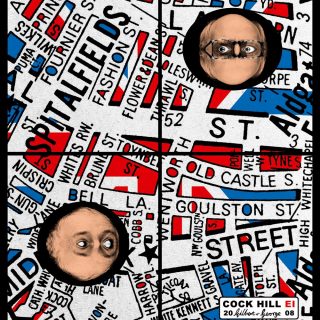 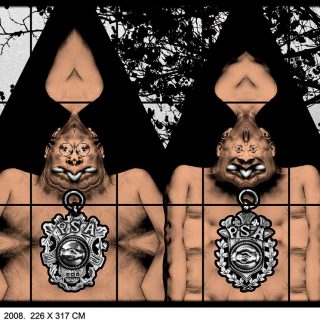 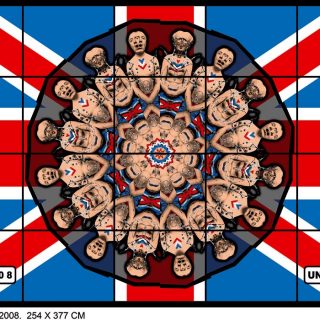 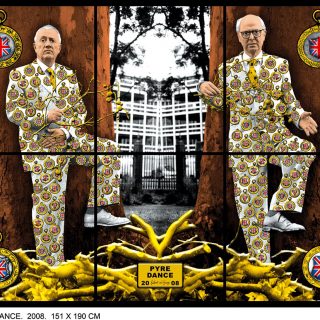 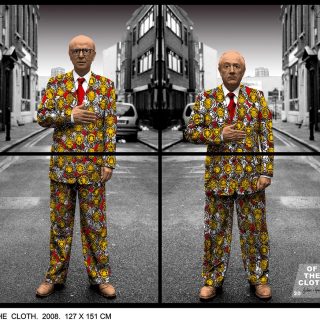 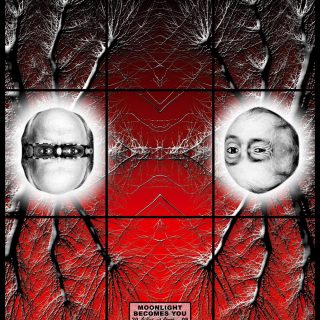