A Beginner’s Guide to Plaka! 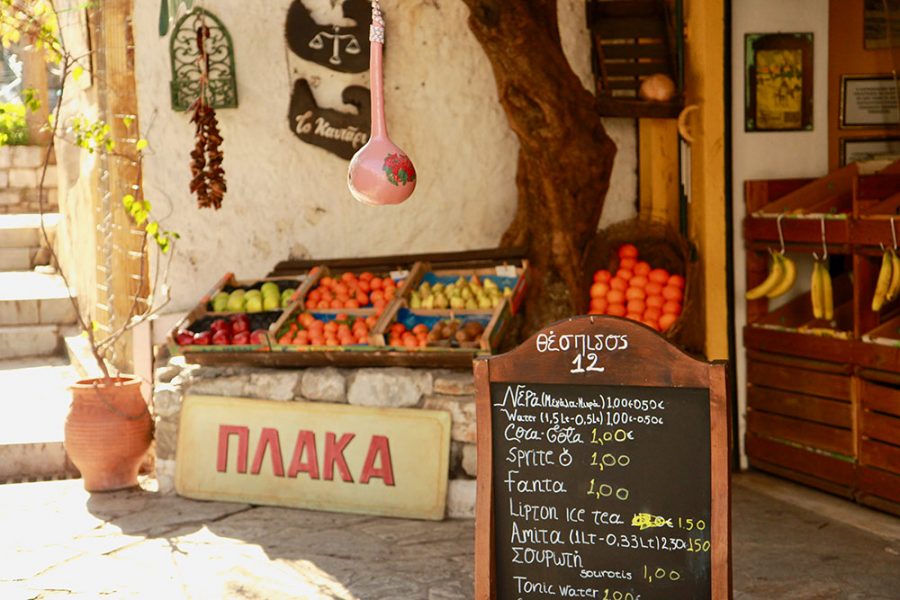 Newcomer to Athens, Will Feuer, takes a historical tour inside Athens’ oldest and most famous neighbourhood and discovers a quaint enclave with a modern stance.

The past century has seen Athens grow exponentially, swelling in population and pushing its borders farther than ever before as new neighbourhoods and suburbs emerge. But at the feet of the Acropolis rests one pocket as old as the Acropolis itself. Of course I’m speaking of none other than Plaka.

Today’s Plaka remarkably retains its rich history. During the War of Independence, the neighbourhood was an Ottoman stronghold and violently contested, thus driving out most residents. After independence, King Otto declared meagerly populated Athens as the capital, leading to a massive influx of people from the countryside. Many workers came from the Cycladic island Anafi and made home in Plaka, building the picturesque white houses of the island they left, still seen today. 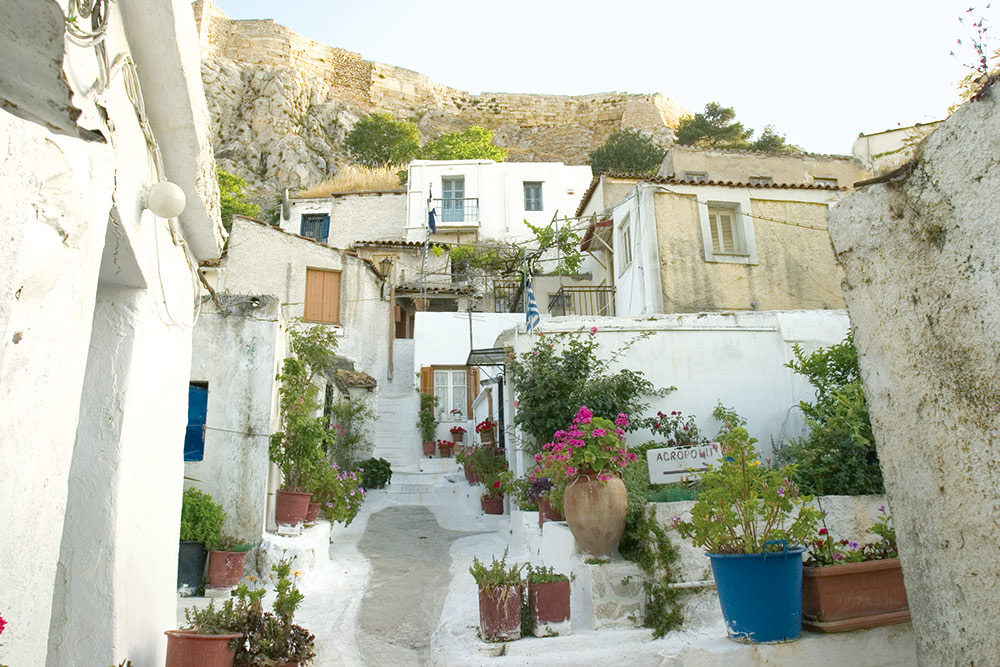 Before the neighbourhood’s houses and streets were renovated in the 1960s, Plaka harkened back to an old, but not forgotten Greece, documented by the award-winning film Stella, filmed in Plaka during the early ‘50s.

Throughout the decades that followed, Plaka found itself at the heart of Greece’s “New Wave” music movement, driven by young intellectuals. Inspired by tunes from Paris, bands like Esperides of Gianni Argiris and the Apanemia of George Zographos found fame across all of Greece from the obscure halls of Plaka.

However, Plaka’s reputation as a center for sound, soon made it the stomping ground for young disco-going Athenians, putting a dampener on the nostalgic neighbourhood. In the 70s, the ministry of Plaka outlawed amplified music and pushed the noisy nightlife out to Psiri and Thissio.

What’s left is a flash of charming Greece in the heart of the bustling metropolis, tempting both traveller and city-dweller to take a break in ancient Athens. 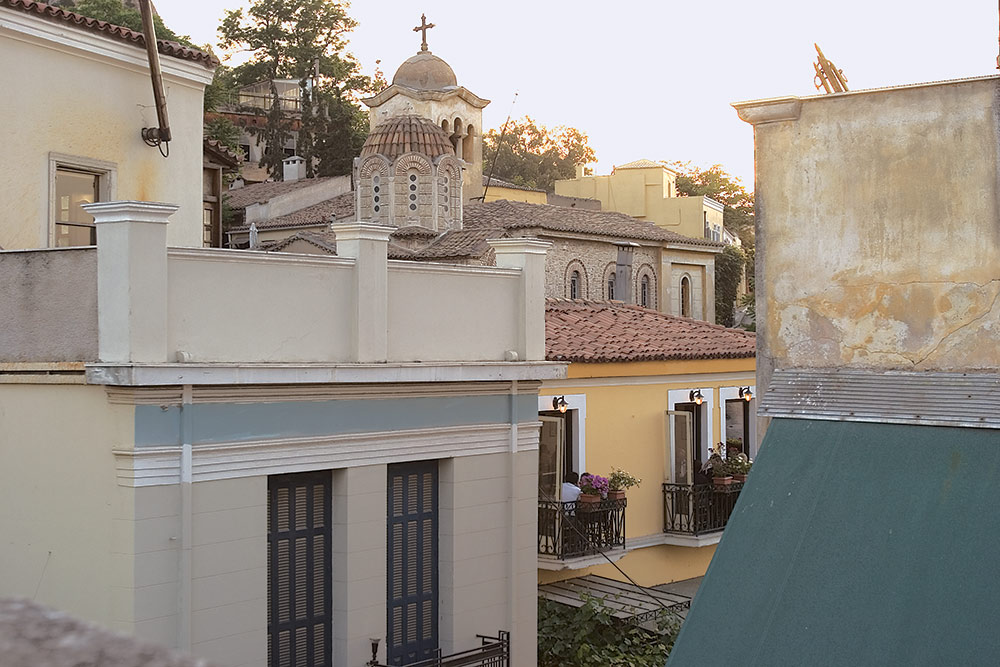 The elegant face of Plaka. Image: Will Feuer

While simply wandering through the labyrinthine streets of Plaka can satisfy the hungriest eyes, there’s plenty to see and do in this preserved bubble of Athens too from shopping stylish boutiques to ancient sites and historic bars.

Check out the alleged “oldest distillery in Greece,” Brettos, established in 1909 right on the busy street of Kidathineon. Filled with wooden distilling caskets and walls lined with a colorful array of bottles, Brettos commands an intimate atmosphere with an old-timey twist, thanks to the forgotten radio on a shelf.  Take advantage of their policy of tasting any product and walk home with a bottle of their reasonably priced, world famous ouzo. 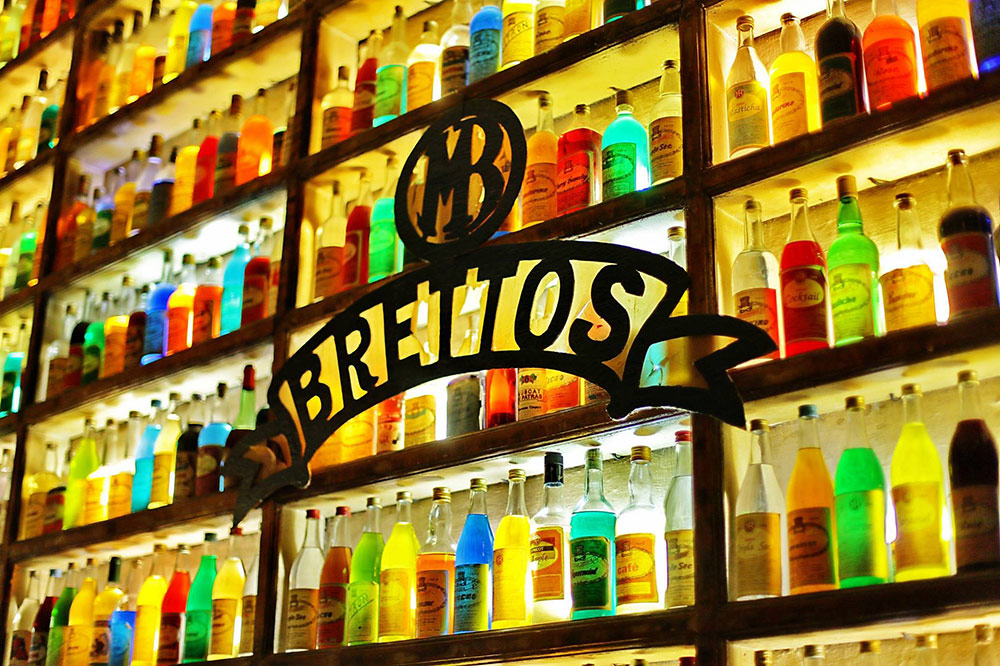 Perhaps among the less pleasant, but more convenient features of Plaka is the seemingly endless lot of souvenir shops. Vacuum-packed olives. Replica artifacts. Greek fashion. Jewelry. Fake jewelry. You’ll find it all in Plaka, but the discerning traveller can still uncover a couple hidden shopping gems. Check out So…Olive! for all kinds of Greek artisanal products like handmade soap, exceptional olive oil, olive infused body products and much more. 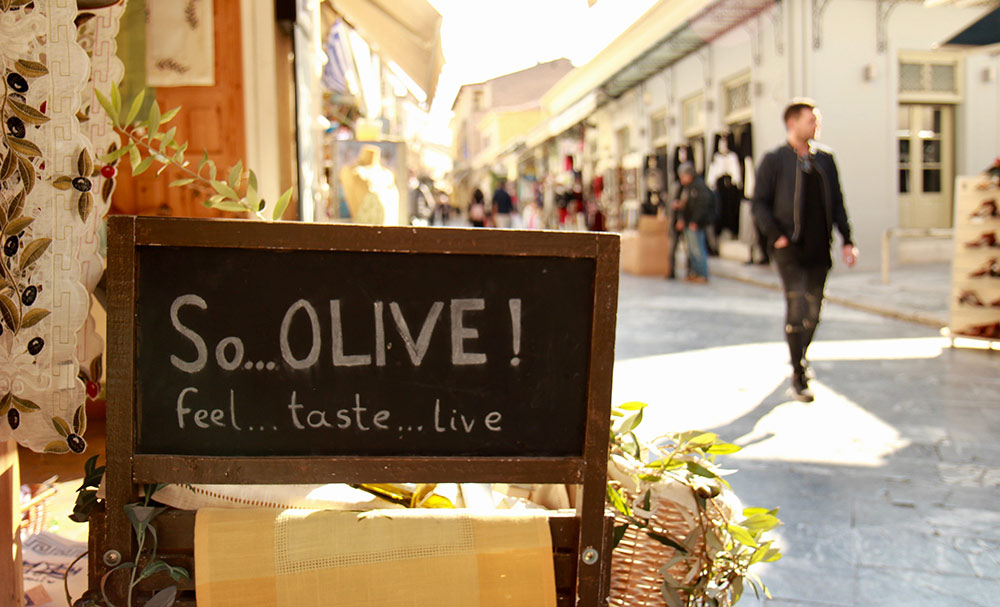 Stylish souvenirs at So Olive. Image: Will Feuer

For more style-savvy shopping, try Adrianou Street’s Forget Me Not, which showcases and collaborates with Greece’s most popular names in contemporary design like Greece is for Lovers, Ble Aspro and LoveGreece. The store features a vast collection of products from Greek clothes and handbags to stationary and books. Continually changing their collection, Forget Me Not is sure to impress with its locally designed and produced products. 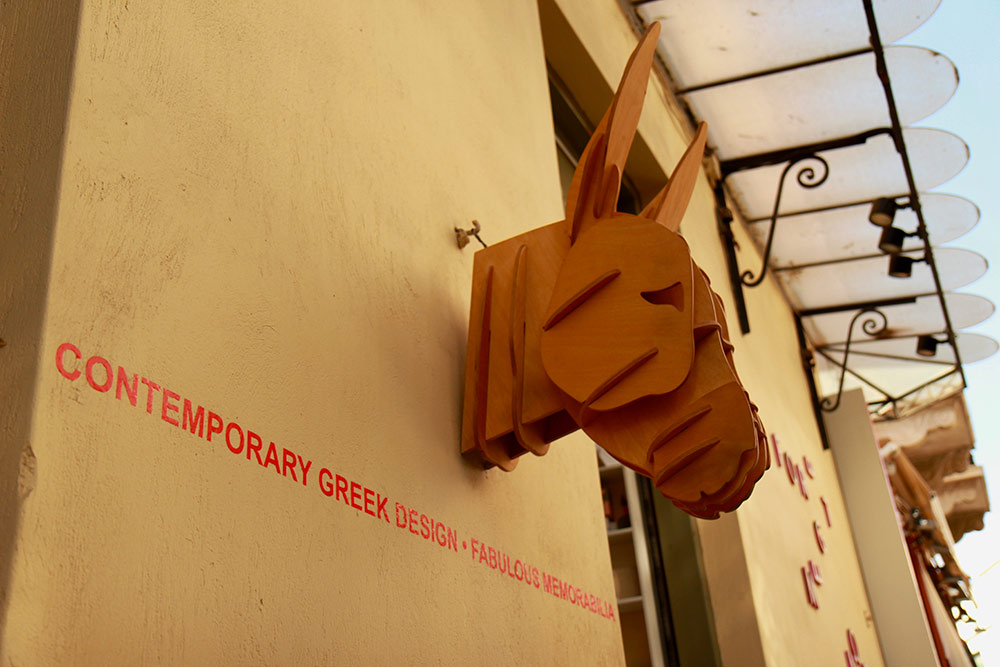 Forget Me Not on Adrianou Street for modern Greek memorabilia. Image: Will Feuer

If shopping’s not for you, Plaka is dense with Athens’ most impressively preserved ancient sites. Built in 335-334 BCE, the Monument of Lysicrates is Greece’s only remaining choragic monument, one earned for victory in the artistic contests of the Dionysia. The imposing masterpiece sits on central Tripodon street, surrounded by peaceful tavernas and a charming view over the city. The monument is carved entirely of marble and depicts the god of wine Dionysus’ clash with the pirates who he turned into dolphins.

Also not to be missed is the Roman Agora, built around first century BCE when Greece had become a part of the Roman Empire. Here remains the ancient buildings of the Roman marketplace in Athens, but among the mainly commercial buildings lays what is believed to be the world’s first meteorological station – the Tower of the Winds. It is a masterfully constructed, octagonal marble structure designed by Syrian astronomer Andronikos Kyrrhestes and continually reconstructed throughout history. 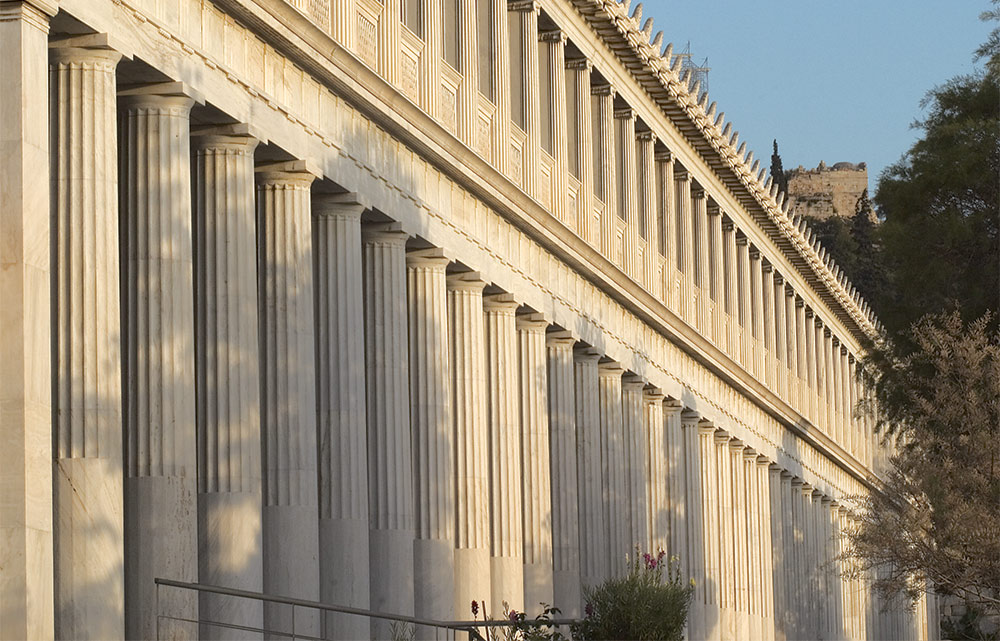 Whether a visitor hoping to get a glimpse at the very best Athens has to offer and do some shopping on the side, or a resident seeking a peaceful interlude in the hectic city, a day in Plaka is always one well spent. Plaka is loaded with more museums, sites, shops and cafes than it’s possible to list; this is just an appetiser. If you’re new to the capital too, go out, explore and let us know what we missed! 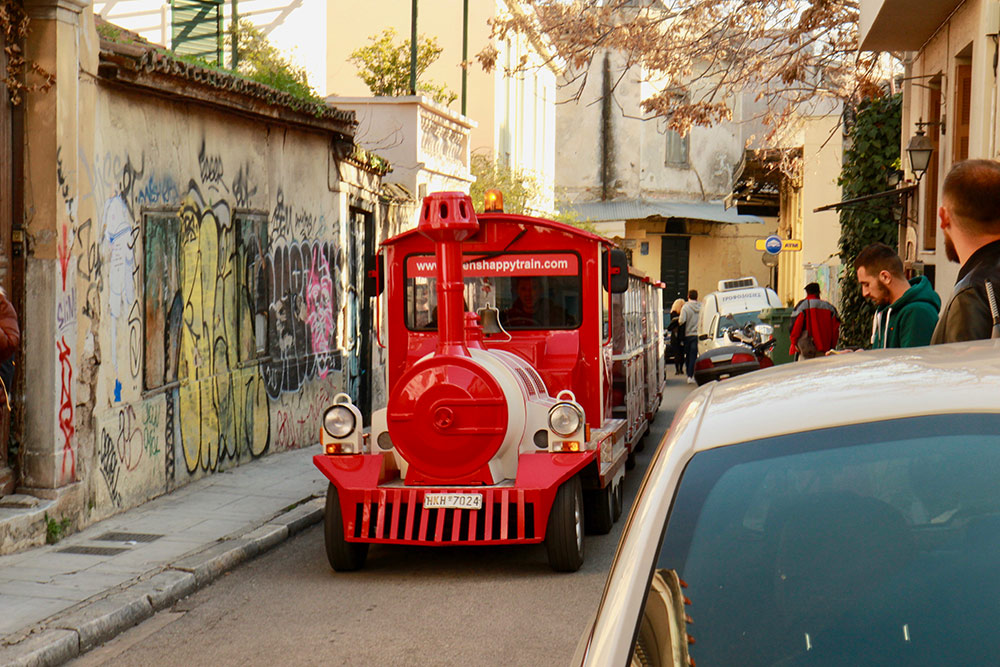 Embark on a Plaka adventure. Image: Will Feuer