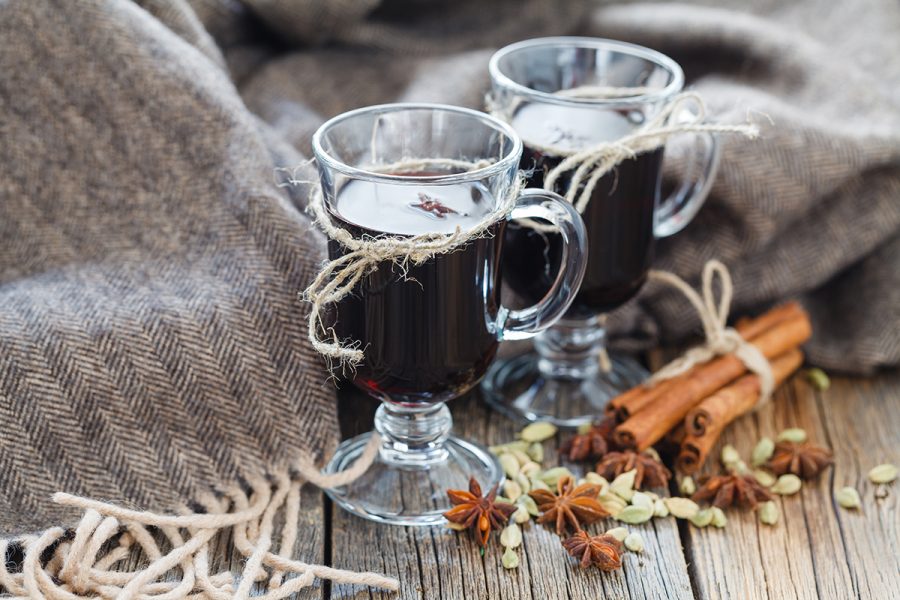 Greece’s liqueurs are like postcards, boasting of regional distinctions and an intoxicating array of raw ingredients.

Beautiful, old-fashioned bottles, traditional recipes from village and city homes, unique tastes. These are the characteristics of Greece’s unusual liqueurs. They are products that have stood the test of time, that have evolved out of the local flora, that are infused with authenticity. In Greece’s liqueurs, the country’s gardens, orchards and groves exist in every glass.

Many of these elixirs, now commercially produced, were once the exclusive province of the home cook. Many Greeks have fond memories of their mothers, grandmothers and aunts setting out tall stout bottles of brandy or tsipouro to which they had added apricot kernels, cherries and other seasonal fruits and sugar. The bottles spent a biblical 40 days in the sun, just enough time for the fruits to infuse the alcohol with flavour.

Getting a mouthful of alcohol-soaked cherries was a special treat. Country and urban cooks alike still make these drinks, but there is also an industry of artisanal liqueur producers who have helped develop both traditional and new beverages. Many of these drinks are tied to specific places.

Liqueurs based on Tsipouro

One such drink, for example, is the honey-and-lemon enriched raki (grape distallate) found in the Cyclades, especially in Amorgos.

Cretan producers make something similar, called rokomelo, which is raki flavoured with honey. In Amorgos, one of the small Cyclades islands, a lemon-honey raki is produced at the monastery of Panagia Hozoviotissa. It is called Lemontelo. Rakomelo and lemontelo are both made by infusing raki with herbs, spices, sugar and of course, honey and/or lemon.

While rakomelo is mellow and earthy, the perfect sip on a cold winter night and often served warmed, lemontelo is more aggressive.

The lemony aroma, from the zest and juice, imbue this liqueur with a well-balanced bitterness. It’s a great aperitif. One of my favourite ways to drink it is on the rocks with plenty of mint, almost like a mojito.

Flavoured tsipouro is made elsewhere in Greece besides the Cyclades and Crete. On Kythera, off the eastern tip of the Peloponnese, one such drink is the fatourada, a local grape distillate flavoured with cinnamon and cloves and traditionally served as an offering to guests alongside the island’s well-known marzipan confections. It is an excellent digestive, especially after a rich dinner.

To make fatourada, sugar, cinnamon and cloves are simmered in tsipouro for several hours. The liqueur is then aged for several months. It has a pleasantly tart flavour and spicy, lingering aftertaste. It is great served with crushed ice.

It was probably only a matter of time before at least one Greek liqueur producer sourced ancient recipes for unusual quaffs. It was only a matter of time, too, before someone would want to take a turn making the mythic ancient nectar, the quaff exclusive to the gods and seminal ingredient in the ethereal ichor, a liquid that ran through godly veins alone. Homer compares nectar to red wine and Plato implores his symposiasts to “get drunk on nectar”. Nectar bestowed immortality and so was forbidden to man. Nonetheless, Athenaeus, chronicler of ancient gastronomy, mentions a recipe in the Deipnosophists: “… certain peoples in the neighbourhood of the Lydian Olympus prepare ‘nectar’ by mixing in the same potion wine, honey and sweet-smelling flowers.”

That recipe inspired at least one producer to make a contemporary nectar called Evoi Vakhoi, which is produced with aged Nemea red wine, honey and rose essence. The drink resembles wine more than liqueur and has lovely tannins and distinct cherry-honey aftertaste. It pairs marvelously with blue cheeses, chocolate and dried fruit. 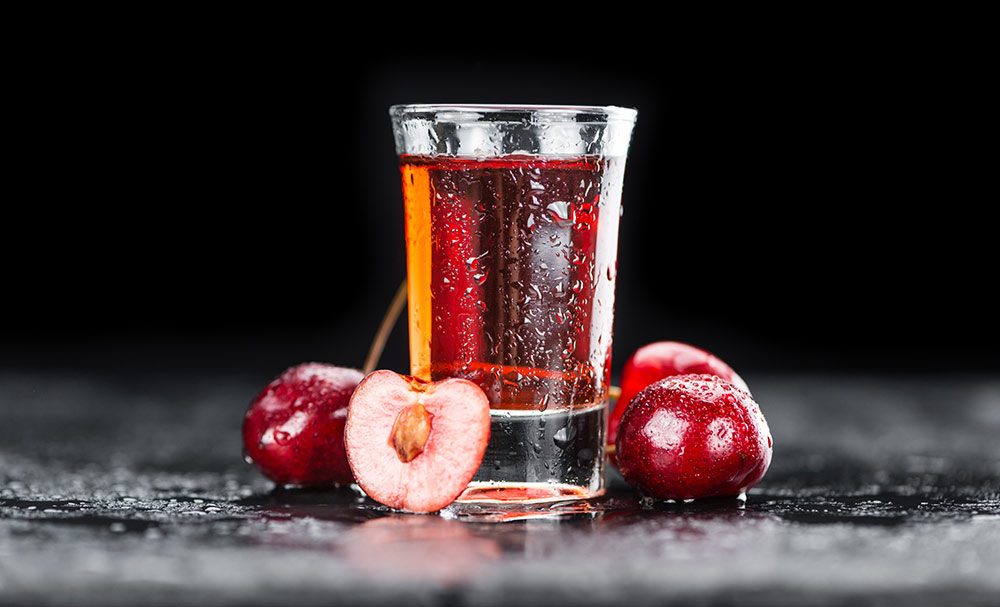 The area in Greece with the longest tradition in producing cherry and walnut liqueurs in Pelion, specifically Zagora. In the last ten years, the art of making these traditional drinks was resuscitated by the Women’s Agricultural and Tourism Cooperative of Zagora.

Cherry liqueur (kerasi) in general tends to be redolent of cinnamon and cloves but also extremely fruity and pleasantly bitter thanks to the lively flavour imparted by the pips. Try any of Greece’s cherry liqueurs on ice with a soda spritzer.

Greek walnut liqueurs are decidedly exotic. They are made with fresh unripe walnuts and generally flavoured with spices such as cinnamon and cloves. The intense sweetness that is apparent at the beginning evolves into a drier sense of a mixture of alcohol and walnuts. It is an excellent digestive drink and pairs beautifully with fresh mint.

Almonds, cornelian cherries, orange liqueurs, typically a specialty of Drama, in northeastern Greece, are made by boiling the fruits and herbs for as long as it takes for them to infuse the water with their perfume. This aromatic water is then added to ouzo or brandy. The almond liqueur tastes of fresh green almonds and sweet almond syrup (soumada). It coats the palate like honey and it makes for a lovely cocktail, especially with ouzo. The unique, slightly sweet and sour taste of cornelian cherry liqueurs are reminiscent of cherry jam on the tongue, as though a whole forest of fruits unfolds in the mouth with each sip. Greece also produces orange liqueur, which tastes like orange peel spoon sweet with cloves. 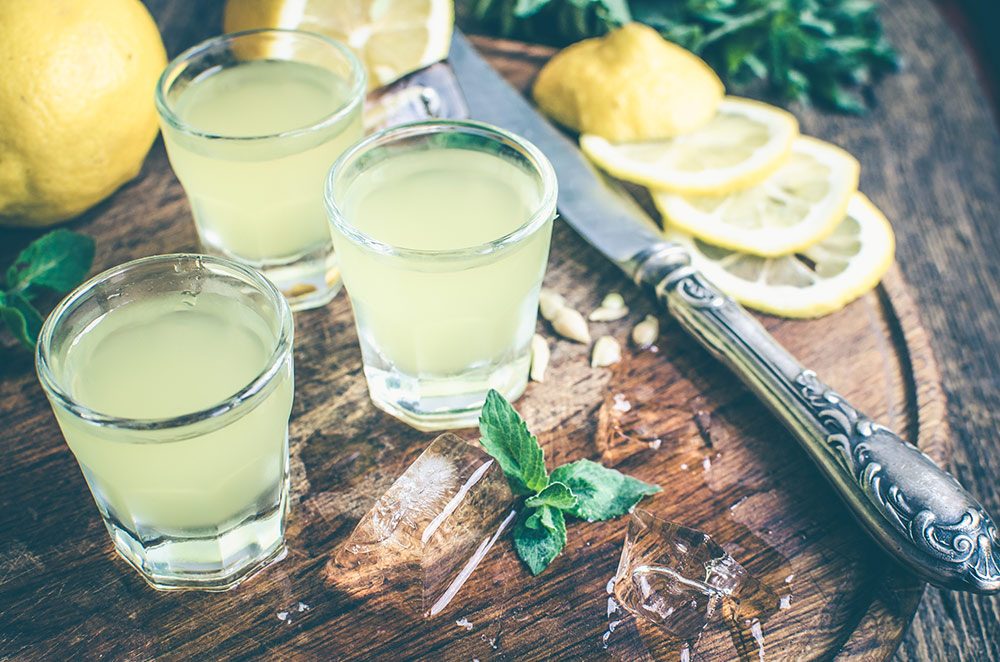 The citron (Citrus medica) was first cultivated on Naxos in the 17th century and flourished until the 1960s and 1970s, when tourism made its cultivation obsolete. But now there has been a renaissance not only in the grove but in the products made with this unusual citrus fruit. Naxos is not only famous for its citron spoon sweet but for its distinct liqueur, called Kitro (Greek for citron).

The fruit is harvested when its aromas are at their peak, from October until February and distilled together with the leaves, two to three times. Water and sugar are sometimes added to the spirit.

Every sip is a sensory experience filled with the fruit’s strong, heady, intense, lasting aroma a little reminiscent of incense and flowers.

Another well-known citrus liqueur is the mandarin liqueur of Chios.

Chios is one of the few places left in Greece where an old, indigenous variety of mandarin still grows, and each spring, if you happen to be walking around the old Genoese manor houses in Cambos or elsewhere, the aroma is truly intoxicating. Chios’ mandarins are a far cry from the tasteless, pipless, tangerines and clementines that have flooded the world in the last few decades. The Chios mandarin liqueur is based on the extract produced by the traditional distillation of the fruit’s peel in stills. The drink has a certain “sauciness”, an astringency that comes from the peel, which is quite vivid and amazingly expressive. The fruit’s natural acidity balances perfectly with the liqueur’s sweetness. 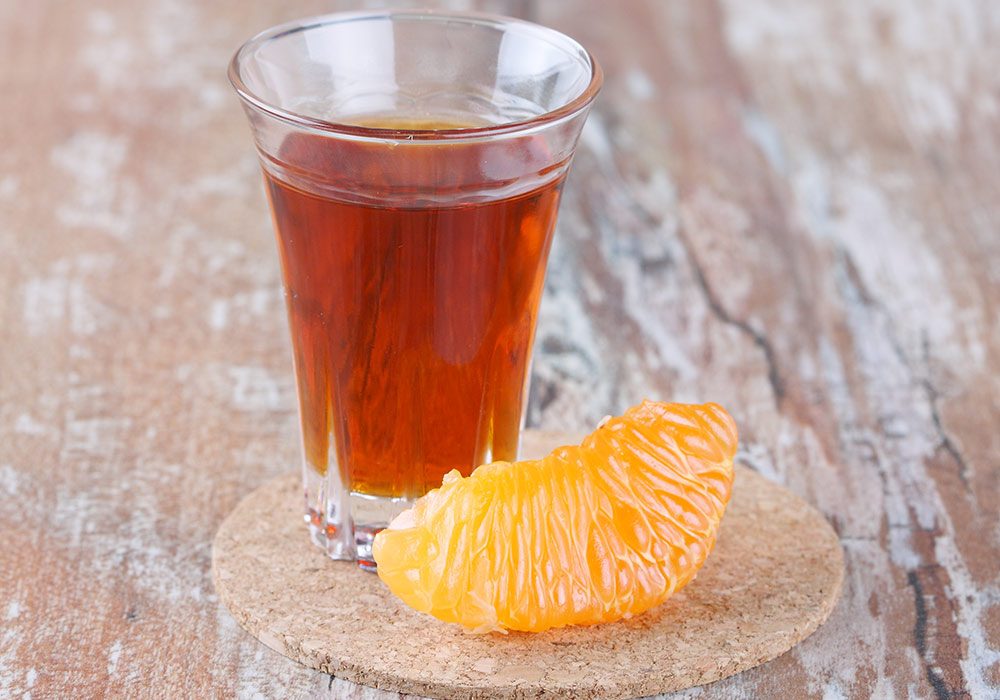 The mastic tree “sheds its tears” only on Chios, near a few medieval villages. The valuable and expensive resin with its unique aroma drips down when the tree’s trunks and branches are slit. Mastiha is a well-known and exceedingly fragrant antioxidant that also lends its incense-like delicate aroma to various liqueurs. The liqueur is savoured chilled, with crushed ice, but it can also be added to various cocktails.

To make it, the resin is distilled together with alcohol. Nowadays, it is the most fashionable liqueur in Greece and has been lauded by famous chefs like Ferran Adria and Andoni Luis Aduriz.

Its origins date to at least 15th century Patras, which was ruled then by the Venetians. The liqueur’s name is derived most probably from the Italian world tintura meaning “extract, colour”.

The old denizens of Patras used to call it “moshovolithra”, meaning something fragrant, due to its intense aroma. It has always been savoured as a digestive. To produce Tendoura, clove, cinnamon, nutmeg, citron and mandarin peels are extracted into alcohol. After a few weeks, the alcohol is filtered, caramel syrup is added, then the mixture is diluted with water. It is set aside to settle for about two months.

Tendoura has a deep brown colour and an explosive aroma and taste. It’s beautiful, dense texture is reminiscent of sweet Greek syrup scented with spices and citrus fruits. It is savoured cold, with crushed ice, diluted with a dash of cream. It’s also a great flavouring for coffee.

This article was first published in Greek Gourmet Traveler.