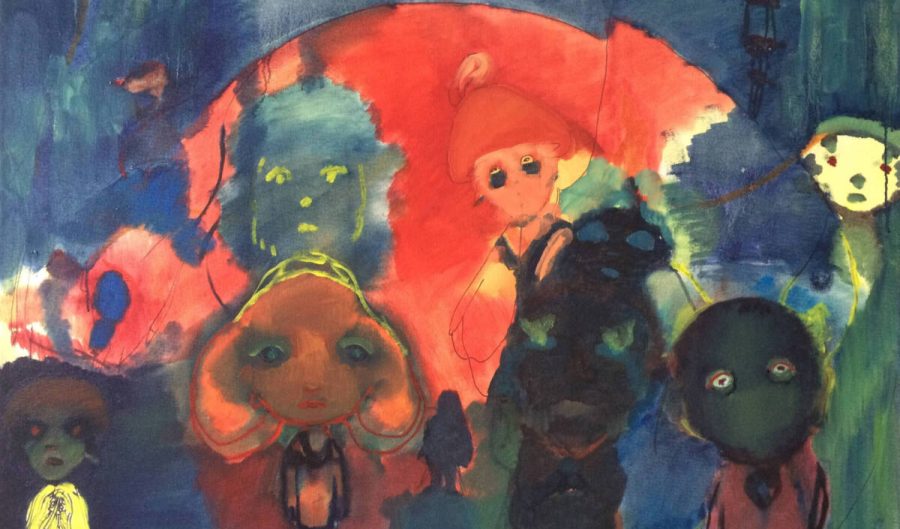 What:  An exhibition of oil paintings on canvas and works on paper created by artist Alexandros Georgiou in New York and Athens from 2017 to the present. The works present a multicolored world, in which mysterious creatures reside and interact, at times anthropomorphic and at others not, as if from the subconscious. Using oil paints and marker pens, the artist creates works which combine a harsh linear sharpness, with a fluid and tender surface.

The title of the show is borrowed from one of Georgiou’s works and reminds one of a fairytale. The prince is a child, his crown is blue and he meets the family in his body, reminiscent of a dream. Perhaps he has been separated from his family and meets them in his body as a physical reaction to the emotional pain?

Georgiou is known predominantly for his traveling art projects in Iran and India. While travelling, the artist hand makes postcards and overlays them with black and white photocopies of photographs he has taken on his travels, which he then paints over. He sends the works by post daily, the recipients sometimes known to him and at other times unknown, thereby creating a dialogue and a sense of shared experience and of the passage of time.

With his new paintings as the medium, Georgiou’s journey to remote places on earth is replaced with a journey into the depths of the self. In this inner journey, he meets and resurrects these fantastical, mysterious, joyous and dejected creatures which he recreates in his paintings.

What to see and do in Athens this December