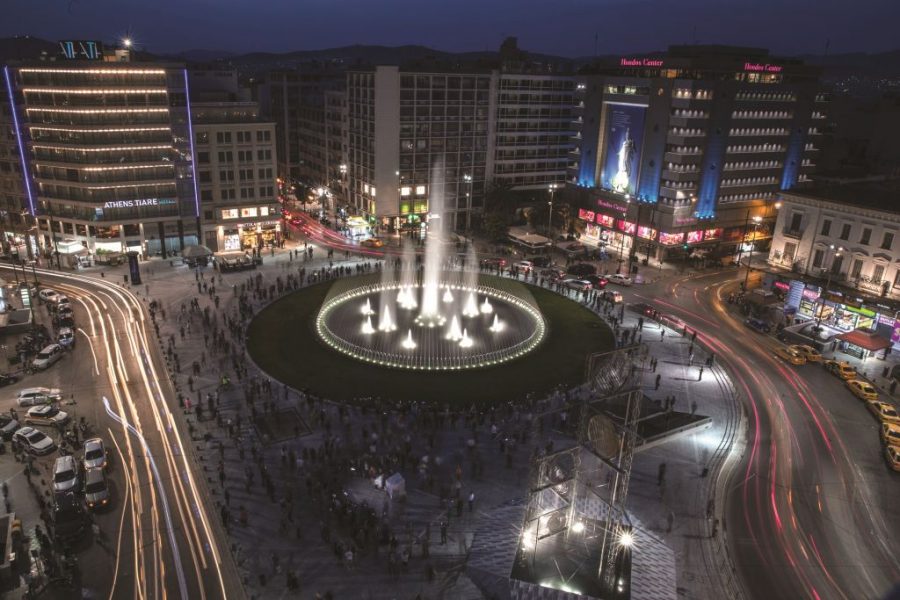 Omonia square gets a new fount of life © Petros Giannakouris

Art Historian Els Hanappe delves into the fascinating rivalry between Athens’ two most prominent squares – one that went on to become the hub of social and political activity and the other that is fast emerging into the role it was always destined to play – as a concord between Athens’ disparate classes!

Once upon a time there was a young German prince named Otto of the House of Wittelsbach, son of King Ludwig I of Bavaria, who was offered the throne of the newly established independent state, the Kingdom of Greece, by the three Great Powers of France, Britain and Russia. His father had always been a fervent admirer of Ancient Greece and had therefore greatly supported the Greek struggle for freedom from the Ottoman yoke during the 1820s. Otto grew up watching his father’s designs for Bavaria’s capital Munich to be developed as the German Athens following neoclassical urban planning concepts, and his commissions for neoclassical buildings such as the Museum of Sculpture (Glyptothek) and the King’s Square (Königsplatz), and now he is appointed king of that very same country that played such a big cultural role in the legacy of his father’s reign. It seems like a fairy tale come true.

So it is that in 1833, he sets sail for Greece on board of the British frigate, the HMS Madagascar, and lands in Nafplion from where he moves further to his capital of choice, Athens, with his Bavarian entourage in tow, the royal household, military troops, artists, and renowned neoclassical architects. Without a palace to match his title, Otto is hosted by the notables of the city, such as banker and politician Alexandros Contostavlos, and later on, this time with his young bride, Amalia, at the Stamatios Dekozi-Vouros mansion, now the Athens City Museum. 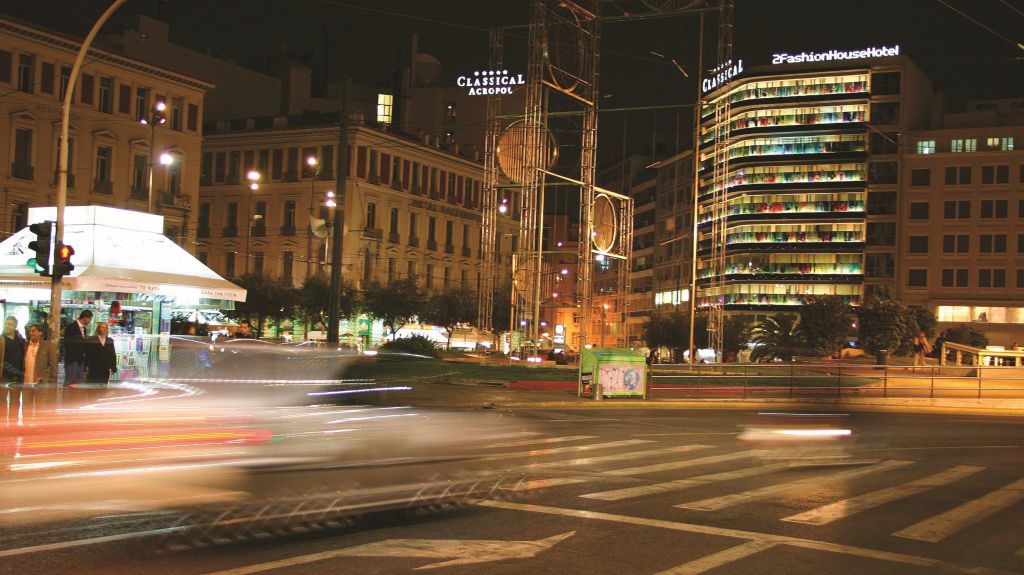 Throughout the centuries, Athens had been reduced from a glorious power under the leadership of Pericles to a provincial town clustered around the Acropolis. Work is started to restore some of its former grandeur, worthy a king. Prior to Otto’s arrival, architects Stamatios Kleanthis and Eduard Schaubert had laid out an urban plan that would connect the royal palace with the Acropolis, the port of Piraeus and the Panathenaic Stadium. The palace square is to be constructed on the northern edge of the city at the top corner where the three avenues converge, and many a wealthy citizen invests in land around the rural area. Unfortunately, their investments do not pay off as plans gradually change: first because of the cost they involve, second because King Ludwig lends money to his son for the construction of the palace for which he seeks the advice of German architect and Director of the Munich Arts Academy Friedrich Wilhelm von Gärtner, who considers his personally selected location, later called Syntagma Square after the 1844 Constitution, safer and healthier in climate. The zone around Omonia is abandoned, plots of land are sold as are half-built homes, creating a dichotomy of the city.

Paris has its own Place de la Concorde, which was first named after its king but re-baptized in veneration of the French Revolution, and so Athens renamed the initial Palace Square from Othonas Square to ‘Omonia’ or Concord Square following King Otto’s overthrow in 1862 and the eventual reconciliation of the rival political factions. Around the square, working class neighborhoods rise up.  Omonia becomes the boundary between the wealthier bourgeois ‘upper side’ and the poor, neglected ‘lower side’: whereas Syntagma forms the center of political and civilian life, Omonia develops into a traffic hub with the opening of the first underground railway between Athens and Piraeus, and a commercial center where social life thrives around the popular theatres and the many coffee shops. The more aristocratic Syntagma finds it counterbalance in democratic Omonia where people of all social strata mingle. Both squares form the center of modern Athens, connected through two main avenues, Panepistimiou and Stadiou, both within walking distance. 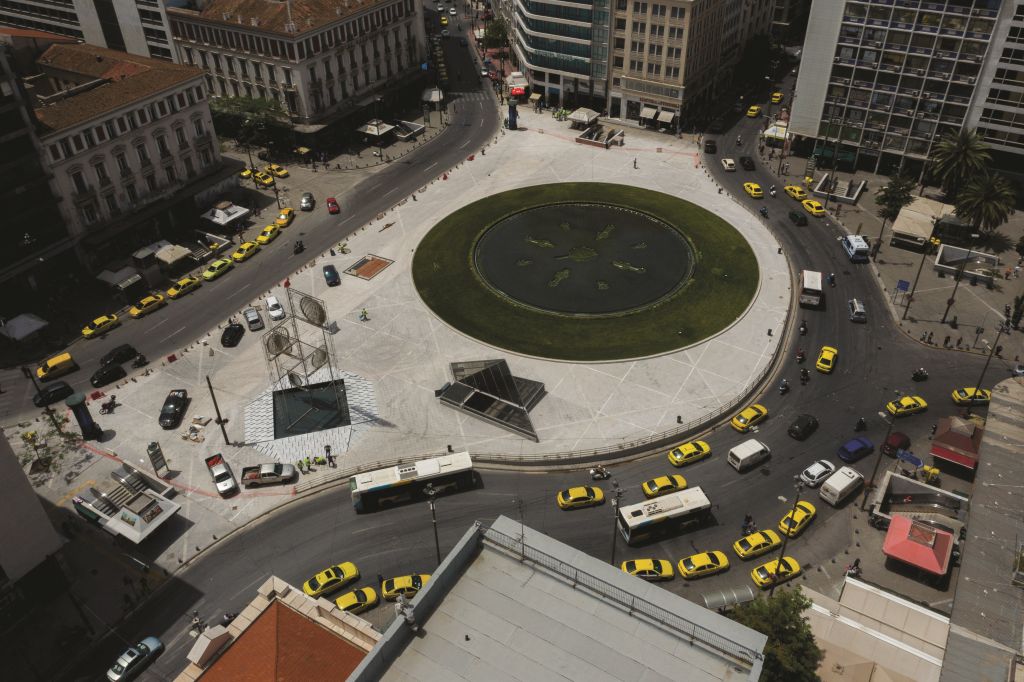 Omonia, view from above© Tatiana Bollar

From the late 19th century onward, large hotels are added to its urban landscape, Bageion, Megalos Alexandros, Carlton, Viktoria, most of which can still be seen today. During its heyday in the 20th century, Omonia undergoes many changes, from the statues of the muses placed around the underground entrances, to the fountain from the fifties, a landmark surrounded by palm trees, around which life swirls day and night. Athenians meet up on the square at the Bakakos pharmacy or, after an intensive night out, to buy an early morning newspaper and sober up with a strong Greek coffee at the Loumidis roastery or sip a nightcap at the legendary Neon café. With the nearby Varvakios Agora or Market on Athinas Street, the Rex cinema on stately Panepistimiou Street, and the National Theatre on Agiou Konstantinou Street, its sphere extends far beyond the confines of a square.

As Athenians increasingly flee the center of the city for the suburbs to get away from noise and pollution, Omonia and its surroundings are gradually taken over by immigrants. The square falls into disrepute, prostitution is rife and drug addicts seek refuge in the many dark alleys. Tourists view it as thoroughfare to reach the National Archeological Museum on nearby Patission Street, and the illegally arrived migrants use the now cemented square as a traffic island on which they can rest on their flights as if the fast traffic roaring past on all sides protects them from the world. Omonia becomes a non-place and the economic crisis at the beginning of the 21st century only makes matters worse. 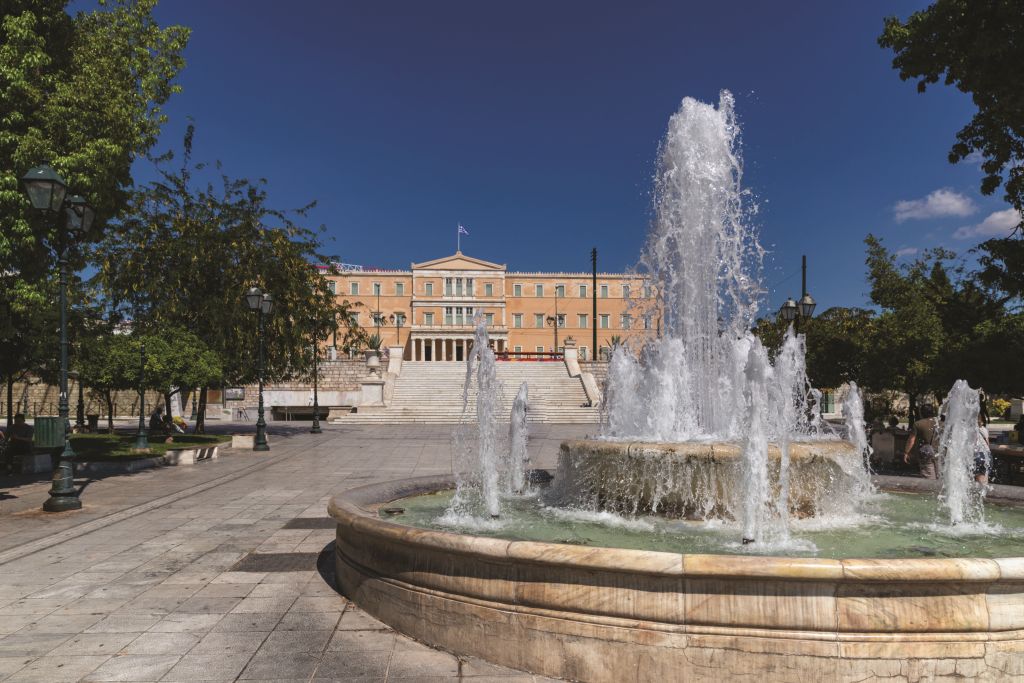 Since the late 1990s and with the run-up to the Olympic Games of 2004, young people and alternative crowds appreciate the undervalued neighborhoods of Psyrri, Kerameikos, Metaxourgeio and Gazi with their lower rents, abandoned workshops that make for perfect studios and lofts, and homes for multicultural residents. Restaurants, galleries, bars, and later on start-up companies that recognize the beauty of former industrial and warehouse architecture bring new life to the area. More recently, plans to convert the historical or commercial center into one large pedestrian triangle linking the archeological sites between the squares of Syntagma, Omonia and Monasteraki into The Great Walk of Athens seem to recognize Omonia, the oldest square of modern Athens, as an integral and important part of the city. The inauguration of its large new fountain may yet prove to be its defining moment.

Let us hope that the citizens of Athens shall stroll it once again!

Greece – On the threshold between the West and the East