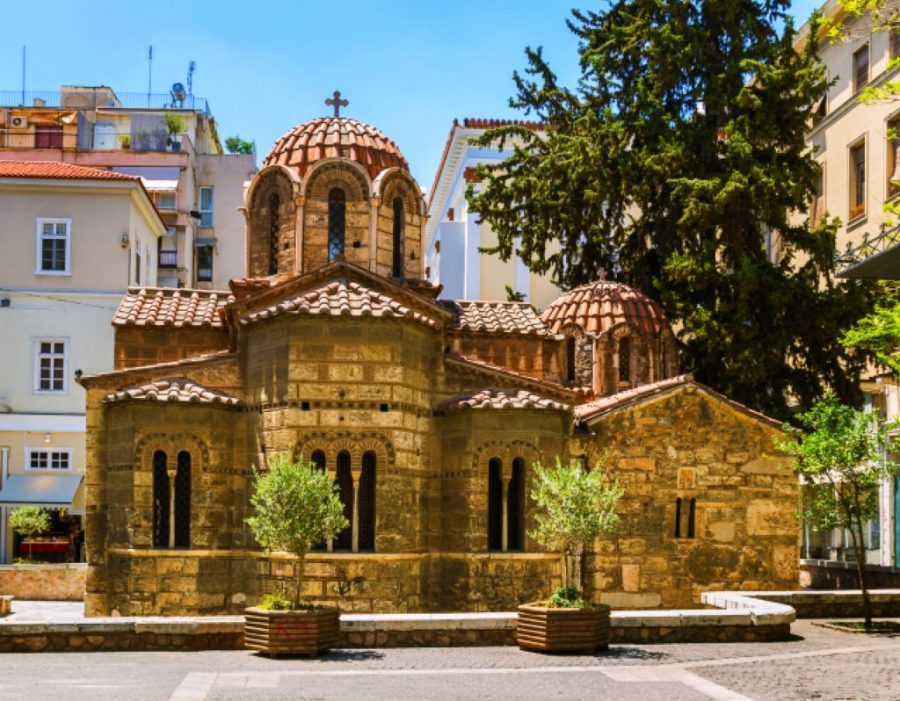 From charming whitewashed chapels that might have stepped off a Cycladic island, to stone and brick temples that rang the bell on history, here are 8 beautiful and storied houses of worship in the city centre where you can witness the sacred and solemn spirit of a Greek Easter. 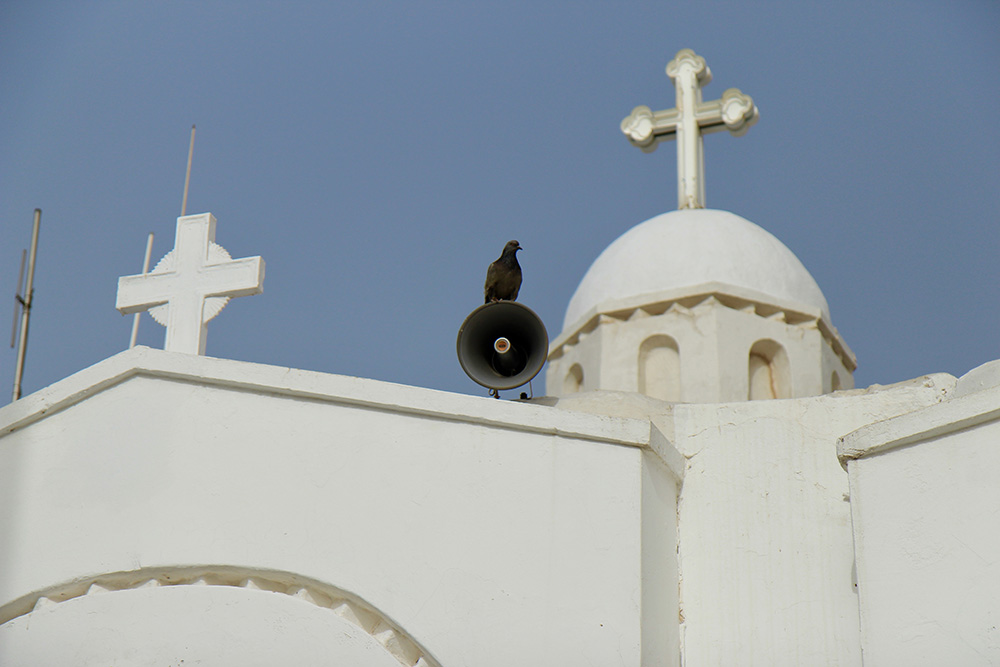 Even if you haven’t actually been to this oh-so-charming whitewashed chapel that looks like it stepped straight off a Greek island, chances are you’ve already seen it. Dating back to 1870, Agios Georgios is one of Athens’ most photographed churches thanks to its stunning location 277 metres above the ground. When the Easter fireworks let fly in the sky every year on Holy Saturday, it’s pure magic.

WHERE: The crowning glory of Lycabettus is reached by either a hearty uphill hike or 3-minute ride on the scenic funicular from the end of Plutarchou Street in Kolonaki (at the intersection with Aristippou).

WHY VISIT?: To enjoy the epic and romantic view over the whole of Athens. While you’re up there, and when lockdown restrictions are lifted,  you can also partake in fine dining or linger over coffee. 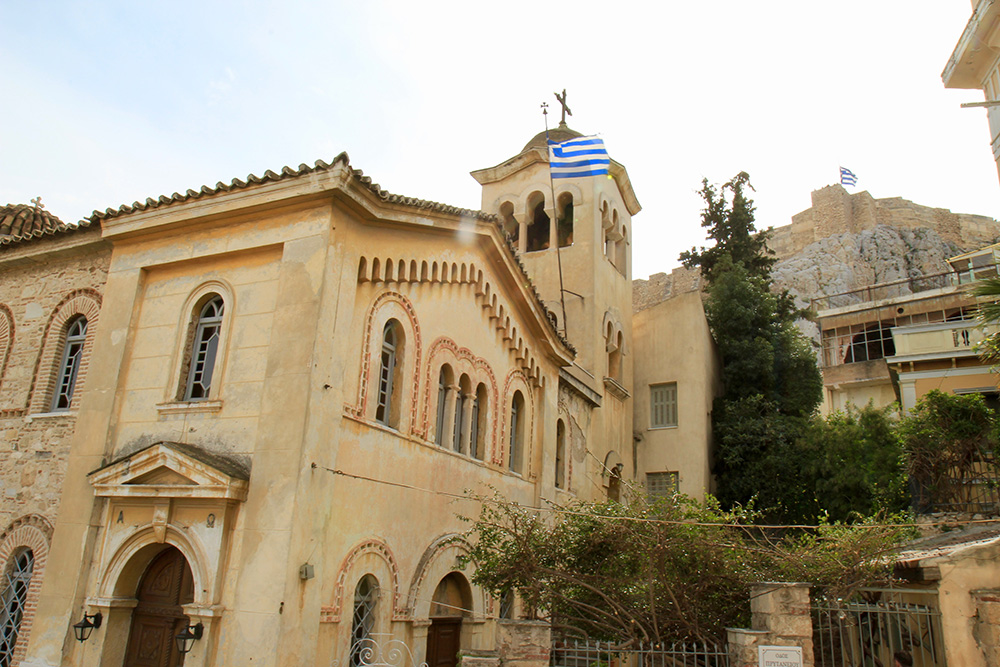 Built in the second half of the 11th century, this striking stone and brick temple holds a special historic significance for Athenians. It houses the first bell to chime out on two important occasions: both in 1833, after the country became independent from Ottoman rule, and then again on October 12, 1944, after the city’s liberation from the Germans.

WHY VISIT?: On Holy Tuesday, lovers of the orthodox psalms congregate to savour the popular Easter Hymn of Kassiani.  It’s also a great excuse to lose yourself in the enchanting neighbourhood of Anafiotika with its picturesque lanes and “Greek Island in the City” vibe. 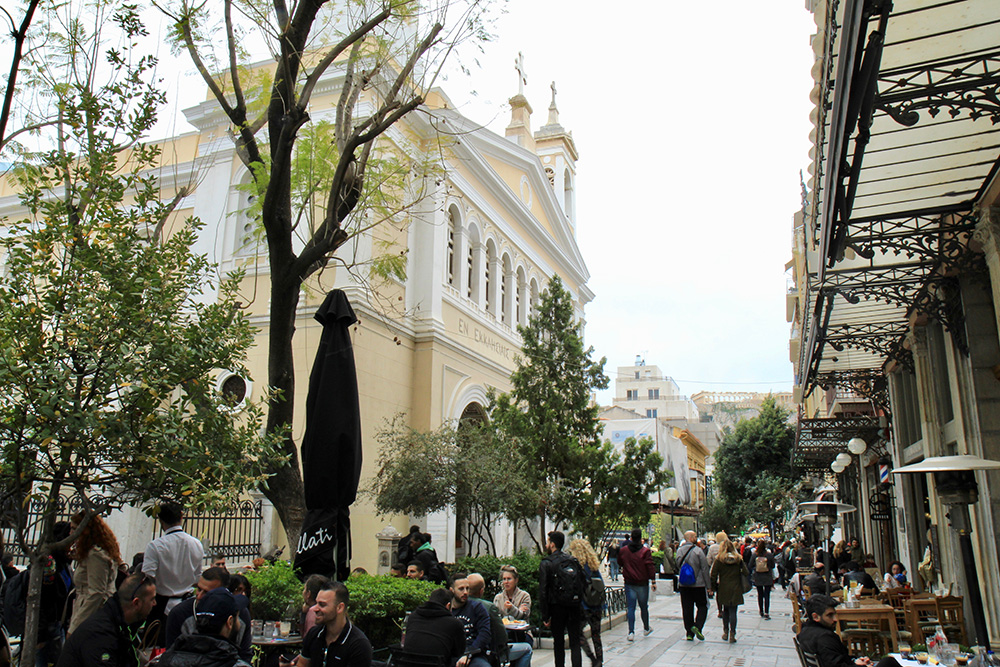 Long before the hip bars, cafes and restaurants moved in, the church of Agia Irini has been the heart and soul of this lively and photogenic inner-city pocket that it gives its name to.

Year-round, Agia Irini (formerly the diocesan church of Athens) possesses a serene and spiritual atmosphere, thanks to the interior’s striking icons and frescoes and is a really lovely church to take refuge in to be alone with your thoughts.

WHY VISIT?: For the great architecture – a combination of Neoclassical, Renaissance and Byzantine styles – and the chance to hear the celebrated Greek Byzantine choir, founded by Lykourgos Aggelopoulos, the principal psalmist here since 1985. 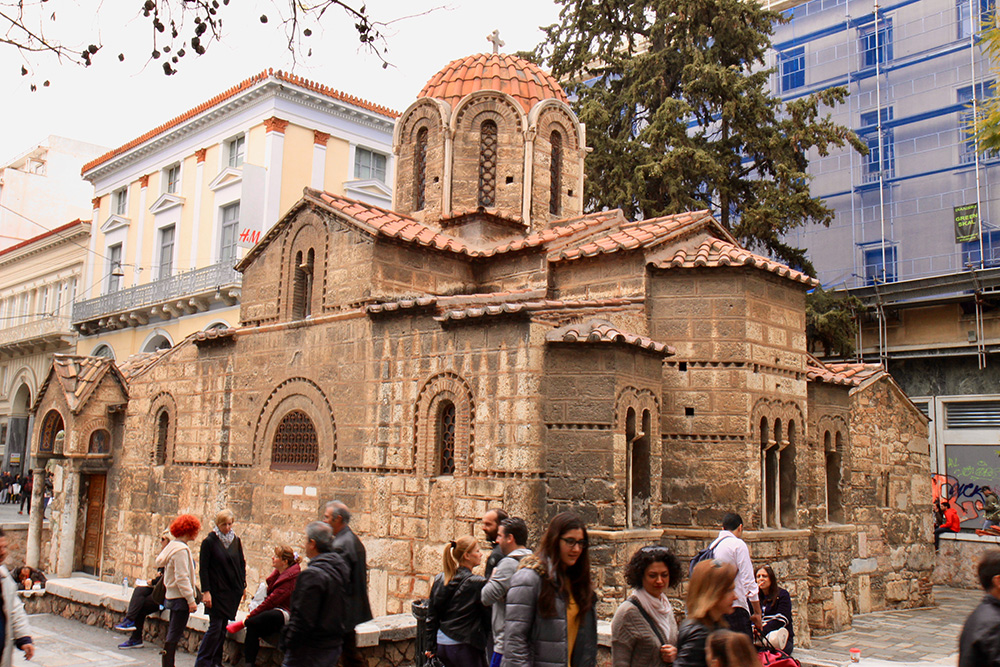 Small but perfectly-formed Kapnikarea is arguably the most well-known rendezvous point in the capital. With its distinctive Byzantine features and handy low wall which serves as a beacon for weary Ermou shoppers and tourists, this 11th century temple of the Holy Virgin is also one of the oldest in Athens. It is believed to have been constructed on the site of an ancient monument dedicated to either Athena or Demeter. Its prime city location makes Panagia Kapnikarea a great choice to observe the Easter Resurrection celebrations.

WHERE: Smack bang in the middle of Ermou Street – Athens’ longest shopping artery.

WHY VISIT?: Surrounded by the cosmopolitan hustle and bustle of Ermou Life, few locations drive home the convergence of Ancient and Modern Athens so well. You can also admire the marvellously sombre murals of Fotis Kondoglou. 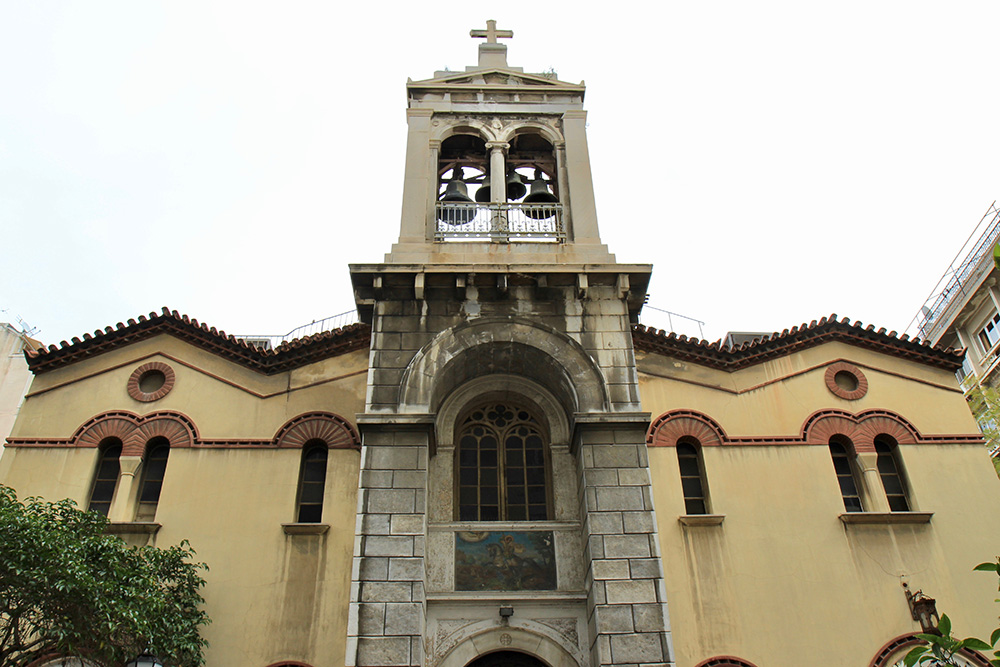 This strategically-placed church sits behind humming Stadiou Street and provides a great gateway to one of the capital’s richest hubs of cultural and intellectual life (such as the National Historical Museum and the theatre district).

First established during the 11th century, the church of Saint George sustained ruinous injuries during the Greek Revolution in 1821 and has been reconstructed at various intervals since. Impressive works by some of Greece’s most important painters of the early 20th century – Dimitrios Pelekasis and Polychronis Lembesis included – can be admired on the walls inside this popular house of worship.

WHERE: In the centre of Platea Karitsi.

WHY VISIT?: To experience one of the city’s most atmospheric Easter processions. On Good Friday, the Holy Bier is escorted by the Greek naval contingent and accompanied by the historic Themistoklis Polykratis’ vocal quartet, prized for their moving renditions of the Week of Passions hymns. 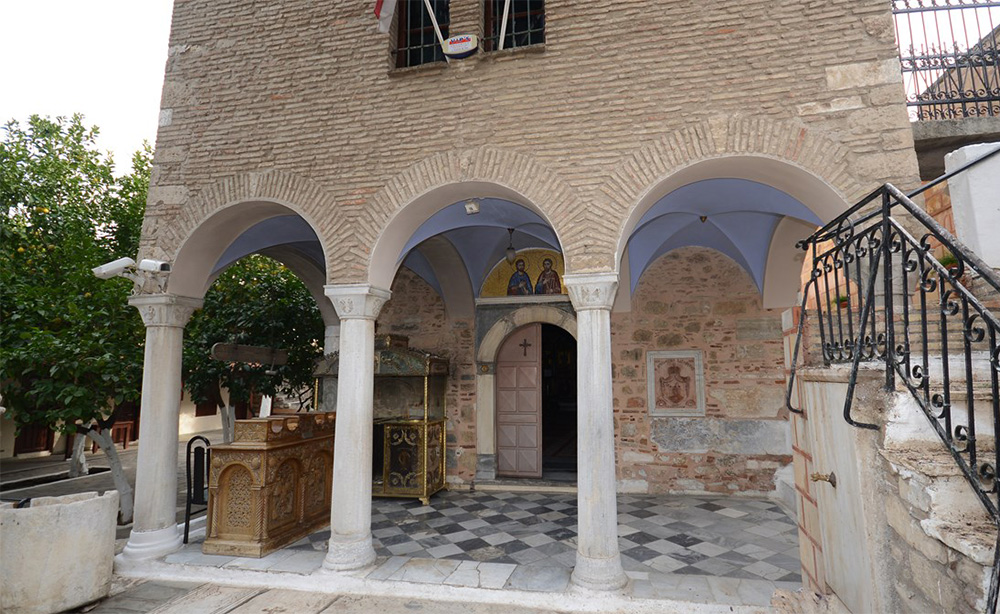 Housed in a pretty Plaka courtyard within a simple Neoclassical building, this 17th century church plays one of the most important starring roles the capital’s Greek Orthodox Easter celebrations. In ancient times, Metohi tou Panagiou Tafou was the location of a temple to the Goddess of Love, Aphrodite. But for the past 1,200 years, it has been the first to receive the Holy Light from Jerusalem.

WHY VISIT?: On Holy Saturday, this special church is the first in Athens to receive the Holy Light, after it has travelled from Jerusalem. From here, candles are lit and the Holy Light travels to other churches in the region in time for their resurrection services. On Good Friday, it’s also a great place to find yourself to observe the devout atmosphere of the Epitaph procession as it makes its memorable way around the alleys and narrow streets of Plaka.

This stunningly beautiful 16th century Byzantine church at the foot of Filopappou hill, may not be the oldest in Athens, but it is certainly one of the loveliest, with a heavy timber roof, marble floors and the permanent scent of incense. A great 1732 fresco of St Dimitrios, astride his horse in a pose copied from ancient images of Alexander the Great, adorns its interior.

WHY VISIT?: For a slice of Ottoman history and for fans of modern Greek architecture. In 1648, the church was the site of a reported miracle. The Turks, ensconced on the Acropolis, prepared to fire a cannon on worshippers gathered in the church, but the gunner was killed by lightning, saving the congregation. Hence its name, Loumbardiaris (‘of the cannon’). The churchyard, with its wooden gate and bells, conjures Japan – a touch by modernist architect Dimitris Pikionis. Pikionis also applied his precise style to the restoration of the back exterior wall, a delightful piece of stonework.

This is perhaps the best vantage point to see a solemn epitaph procession, and with its village-like charms, you could be led to believe that you were celebrating Easter in a Greek village!

The headquarters of the Archbishop of Greece, the cathedral took 20 years to build and was finally completed in 1862. The foundation had been laid on Christmas Day in 1842 with King Otto and Queen Amalia laying the cornerstone and architect Theophil Hansen supervising its construction. Marble from 72 demolished churches was used to build its walls.

WHY VISIT?: With its three aisles and 24-metre high dome, the cathedral is an imposing architectural landmark, that has witnessed coronations, state funerals, weddings and baptisms! The newly renovated cathedral has been a fine example of an amalgam of differing architectural styles, which in fact lends it its unique character. To the right of the Metropolitan Cathedral, is the charming, small cathedral, dedicated to Agios Eleftherios, the 12th-century church is decorated with 90 relief scenes. Also known as Panagia Gorgoepikoos, it’s a tiny Byzantine church with some beautiful masonry work on the outside. For the very devout, Easter services here are a must. We’d suggest it to imbibe the Greek Easter spirit as you watch a stream of candle-bearers carrying the Holy Light back home after midnight mass. A particularly moving experience.

One of the most beautiful of Easter Week traditions is on Holy Thursday when the women prepare baskets of fresh flowers and pass the night in the church after the Holy Thursday liturgy adorning the bier of Christ in readiness for the funeral procession on Good Friday.

Do make sure to dress appropriately when entering a Greek church, with no bare shoulders or legs, especially over the Easter period. 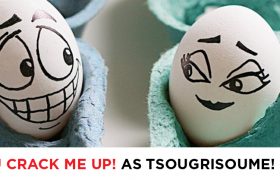 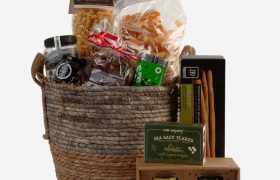 Be an Easter Angel with these magical Gourmet Gree... 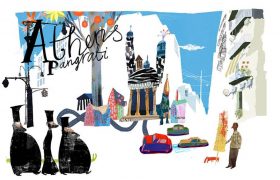 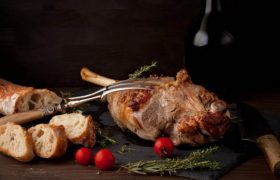 Order your Easter feast from home!